Before he was sworn in, Volodymyr Zelensky allegedly gathered his aides to discuss how to handle Trump's demands 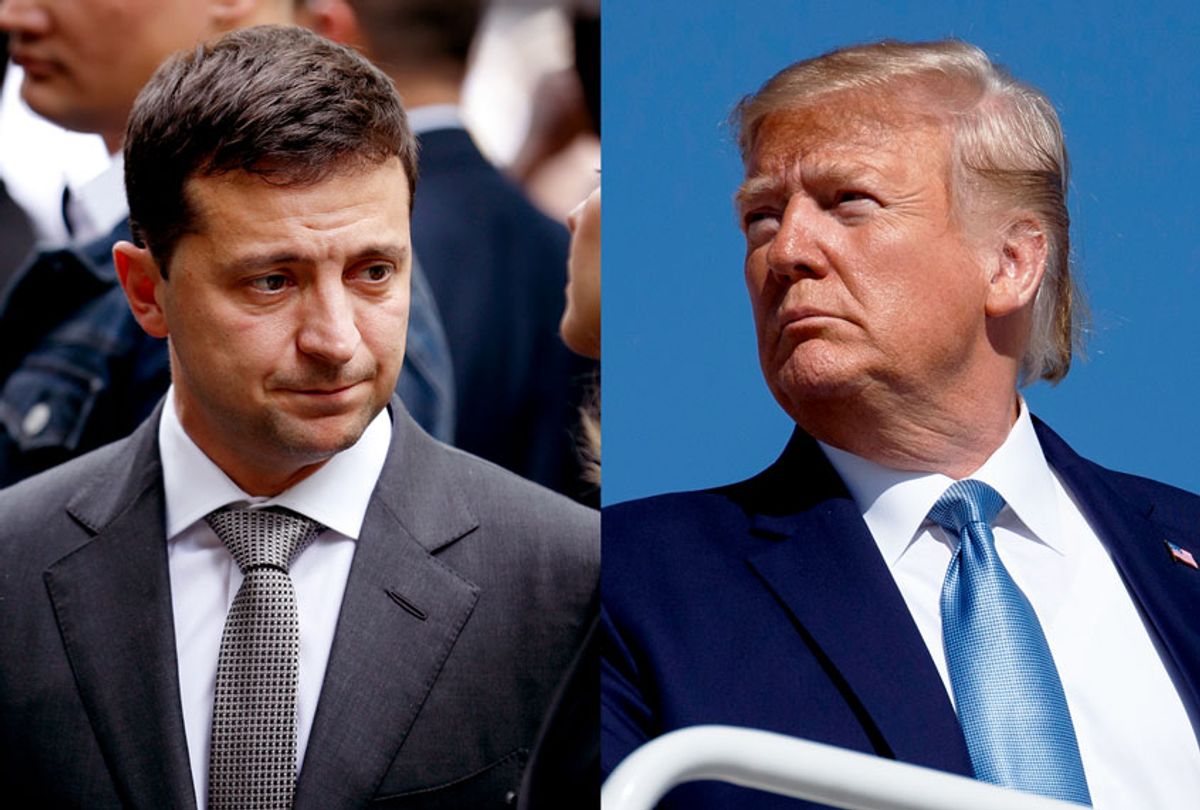 Ukraine's newly-elected leader was concerned about pressure from President Donald Trump to dig up dirt on  Democratic rival Joe Biden roughly two months before the now-infamous phone call which launched the impeachment inquiry into his actions, according to the Associated Press.

Ukrainian President Volodymyr Zelensky gathered a small group of advisers in Kyiv for a meeting on May 7 that was supposed to be about his nation's energy needs. Instead, the group reportedly spent most of the meeting discussing how to navigate requests from Trump and his personal lawyer, Rudy Giuliani, to open investigations into Trump's political rivals.

Zelensky's top aides, Andriy Yermak and Andriy Bogdan, reportedly attended the meeting. Andriy Kobolyev, head of the state-owned natural gas company Naftogaz, and Amos Hochstein, an American who sits on the Ukrainian company's supervisory board, were also in attendance. (Hochstein previously advised the Obama administration on matters related to Ukraine.)

The meeting came before Zelensky was sworn in as Ukraine's sixth president on May 20 but roughly two weeks after Trump called Zelensky to congratulate him on his election victory.

The full details of what the two leaders discussed during that April 21 phone call have never been publicly revealed, and it is unclear what Trump explicitly asked of Zelensky. Trump has said he would release a transcript of the first call, but it remains unclear if or when that will happen.

Before that early-May meeting, the State Department recalled Marie Yovanovitch, the former U.S. ambassador to Ukraine. Yovanovitch is believed to have been removed from her post, because she had openly criticized the office of Yuriy Lutensko, then-Ukraine's prosecutor general, and Giuliani.

And in the days after the May 7 meeting and Yovanovitch's ouster, Giuliani flew to Madrid to meet privately with Yermak, reportedly to press the Ukrainian aide to investigate Democrats.

The news comes as House Democrats press forward with their impeachment inquiry, which is focused on a July 25 phone call between Trump and Zelensky. During that call, Trump asked Zelensky to do him a "favor" and "find out what happened" with the Democratic National Committee's computer server that was hacked by Russians during the 2016 presidential campaign, according to a summary of that call released by the White House. Trump also urged Zelensky to connect with Giuliani and Attorney General William Barr about the request.

Trump has repeatedly questioned and attacked the U.S. intelligence community's findings that Russians hacked and disseminated emails from the DNC and Hillary Clinton in order to help him clinch the presidency. The Justice Department is investigating the origins of the investigation into Russian interference in the 2016 election.

House Democrats are also probing another request the president made on that now-infamous call — that Ukraine investigate Biden and his son, Hunter, who served on the board of a Ukrainian energy company that came under scrutiny for possible abuse of power and unlawful enrichment. There is no evidence of wrongdoing by either Joe or Hunter Biden.

Democrats have alleged that Trump abused his office for personal and political gain. They claim the president violated his oath of office by urging a foreign nation to interfere in the 2020 presidential election, an allegation which was first detailed in the whistleblower complaint released last month that blew open the scandal and prompted House Speaker Nancy Pelosi, D-Calif., to launch the inquiry. Trump has argued his conversation with Zelensky was "perfect" and that he had asked his Ukrainian counterpart to do "whatever he can in terms of corruption, because the corruption is massive." (The president's remarks came even after he admitted he ordered nearly $400 million in military aid for Ukraine to be withheld in the days before the mid-July call.)

Trump has denied that he withheld the aid in order to urge Zelensky to launch an investigation into Biden and other Democrat. But last week, acting White House chief of staff Mick Mulvaney admitted just that — before later walking back his remarks.

Most recently, the top U.S. diplomat in Ukraine, Bill Taylor, told lawmakers Tuesday that Trump had directed officials to tie aid to Ukraine to a commitment from Zelensky to open an investigation into the Biden family.

Last month, however, Zelensky denied he felt pressured to investigate the Bidens.

"I'm sorry, but I don't want to be involved, to democratic, open elections of U.S.A.," the Ukrainian leader said at a joint news conference with Trump at the U.N. "We had, I think, good phone call. It was normal. We spoke about many things, and I think, and you read it, that nobody pushed me."

Trump then chimed in: "In other words, no pressure."