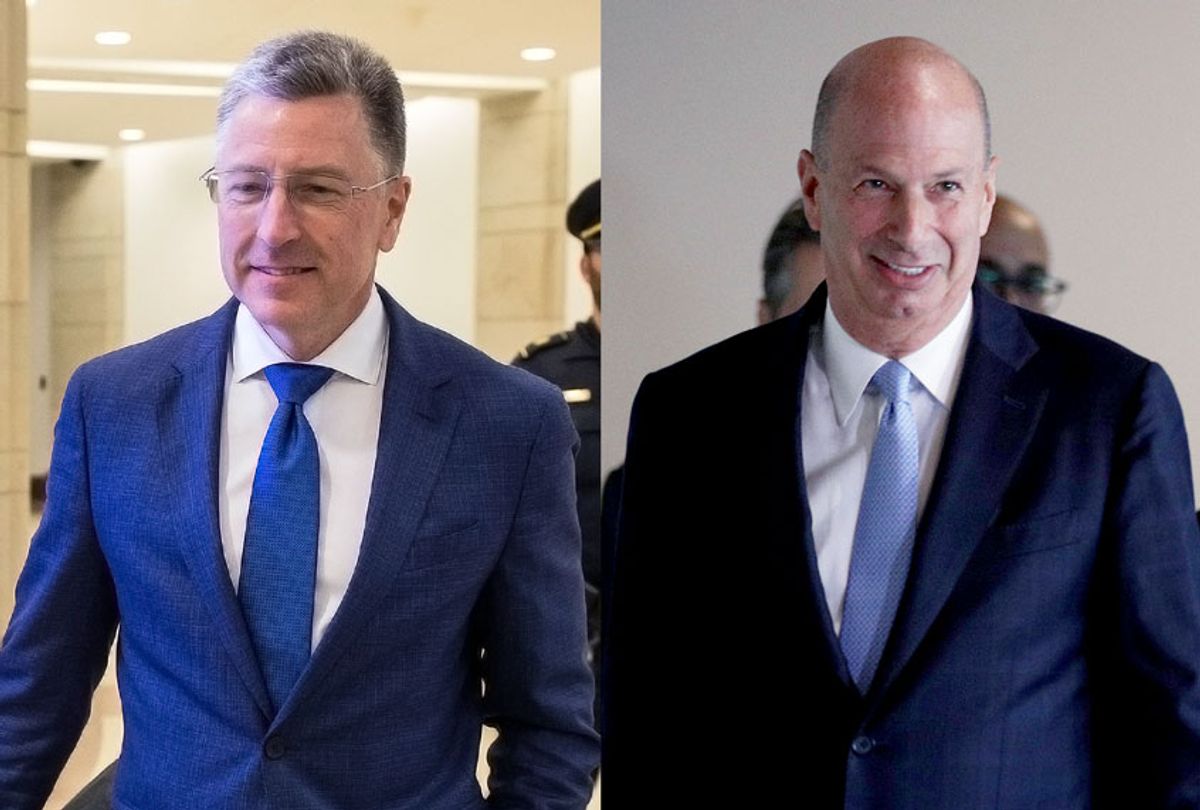 The two transcripts include the hours-long testimonies of U.S. Ambassador to the European Union Gordon Sondland and Kurt Volker, the former U.S. special envoy to Ukraine. They come a day after lawmakers released transcripts of interviews with former U.S. ambassador to Ukraine Marie Yovanovitch and former State Department official Michael McKinley.

Sondland, a wealthy-hotelier-turned diplomat who was appointed by Trump to his post in Brussels, alleged that Trump sought to leverage a potential White House meeting and military aid to pressure newly-elected Ukrainian President Volodymyr Zelensky to commit publicly to investigations. He claimed Trump requested that Ukraine investigate a conspiracy theory about alleged Ukrainian interference in the 2016 election and Burisma Group, a gas company where former Vice President Joe Biden's son once sat on the board.

"This whole thing was sort of a continuum, starting at the May 23 meeting, ending up at the end of the line when the transcript of the call came out," Sondland testified, referring to a summary of Trump's July 25 phone call with Zelensky. "And as I said to counsel, it started as talk to Rudy [Giuliani], then others talk to Rudy. Corruption was mentioned. Then, as time went on — and, again, I can't nail down the dates — then let's get the Ukrainians to give a statement about corruption. And then, no, corruption isn't enough, we need to talk about the 2016 election and the Burisma investigations."

Sondland noted that he was at first unaware of a link between these proposed Ukrainian investigations and military aid, but later told a top government official in Ukraine that security assistance would "likely" be withheld unless the country opened the investigations requested by Trump.

"It was always described to me as ongoing investigations that had been stopped by the previous administration and they wanted them started up again. That's how it was always described," Sondland continued. "And then finally at some point I made the Biden-Burisma connection, and then the transcript was released."

Sondland said he "couldn't get a straight answer as to why the aid was being held up." He said that during a Sept. 1 meeting in Poland, Zelensky raised concerns about the aid freeze directly to Vice President Mike Pence. Sondland added that after the meeting, he told Andriy Yermak, a top Ukrainian national security adviser, that the aid would be contingent on Trump's requested investigations.

"After that large meeting, I now recall speaking individually with Mr. Yermak, where I said that resumption of U.S. aid would likely not occur until Ukraine provided the public anti-corruption statement that we had been discussing for many weeks," Sondland wrote in his addendum, which was released on Tuesday alongside a nearly 400-page transcript of his testimony.

Sondland said that Trump never discussed with him his demands for investigations but made clear that "whatever the Ukrainians were going to promise in any context, he wanted it public." He called Trump's request that Ukraine investigate the Biden family "improper" and possibly "illegal."

Sondland also testified that he discussed Giuliani, the president's personal lawyer, with Secretary of State Mike Pompeo but only in "general terms." He said the State Department was "fully aware of the issues" related to Giuliani but noted "there was very little they could do about it if the president decided he wanted his lawyer involved."

"They hit a brick wall when it came to getting rid of Mr. Giuliani," Sondland said. He noted that Giuliani's demands "kept getting more insidious" as he "became aware that there might be a link between the White House visit and aid to the Ukraine that was being held up."

Giuliani has emerged as a key figure in the inquiry amid allegations that he pursued a shadow foreign policy operation aimed at damaging Trump's political rivals.

"To my knowledge, the news about a hold on security assistance did not get into Ukrainian Government circles, as indicated to me by the current foreign minister, then diplomatic adviser, until the end of August," Volker said. "And by the time that we had that, we had dropped the idea of even looking at a statement."

He said he was "surprised" and "troubled" by Trump's phone call with Zelensky, and said the president's requests could hinder U.S.-Ukraine relations.

"It creates a problem again where all of the things that we're trying to do to advance the bilateral relationship, strengthen our support for Ukraine, strengthen the positioning against Russia, is now getting sucked into a domestic political debate in the U.S., domestic political narrative that overshadows that. And I think that is extremely unfortunate for our policy with Ukraine," he said.

Trump has repeatedly denied the existence of a quid pro quo and has decried the impeachment investigation as a "hoax."

Giuliani also came up in Volker's testimony. The diplomat said the president's lawyer was amplifying a "negative narrative" about Ukraine.

"I explained it to President Zelensky and chief of presidential administration, Andriy Bohdan, was standing next to him. And I explained that I thought that there is a negative narrative about Ukraine that is counteracting all the good things that he is doing, and that we are officially communicating back, and that this is being amplified by Rudy Giuliani," Volker said. "So this is a negative factor for Ukraine's image in the United States and our ability to advance the bilateral relationship."

Volker noted that it was "probably very helpful" that he had mentioned his concerns about Giuliani to Zelensky prior to his call with Trump on July 25.

A whistleblower complaint to the intelligence community, which ultimately provoked House Speaker Nancy Pelosi, D-Calif., to open the impeachment inquiry, indicated Sondland and Volker had provided advice "to the Ukrainian leadership about how to 'navigate' the demands that the president had made of Mr. Zelensky." That allegedly occurred the day after Trump's call with Zelensky.

Text messages provided to Congress last month revealed that Sondland and Volker had worked on language for a statement they wanted Zelensky to release in August, which would have committed him to the investigations sought by Trump. The diplomats consulted with Giuliani.

Transcripts of Sondland's and Volker's testimony were released after the House voted along party lines last week to approve a resolution establishing the procedures of the inquiry. The measure called for public hearings and established their general format. It also allowed the president or his counsel to participate in impeachment proceedings held by the House Judiciary Committee, which has the authority to report articles of impeachment against the president to the full House.

"The testimony of Ambassadors Volker and Sondland shows the progression of efforts by the President and his agent, Rudy Giuliani, to use the State Department to press Ukraine to announce investigations beneficial to the President's personal and political interests," the three chairs of the committees leading the inquiry said in a joint statement. "With the release of the full production of text messages provided to the Committees by Ambassador Volker, and an additional declaration by Ambassador Sondland, the President’s scheme comes into clearer focus."

"This blanket stonewalling will only continue to build the case against the President for obstruction of Congress, especially in light of the damning evidentiary record the Committees have already gathered," they continued.

Earlier on Monday, the Democratic chairmen called on acting White House chief of staff Mick Mulvaney to come in for a closed-door deposition on Friday.

Administration officials who have been asked to testify in the inquiry have so far declined to appear for scheduled testimony. On Tuesday, two more White House officials — Michael Duffey, a top official on the White House budget office, and Wells Griffith, a senior aide to Energy Secretary Rick Perry — failed to appear for interviews.