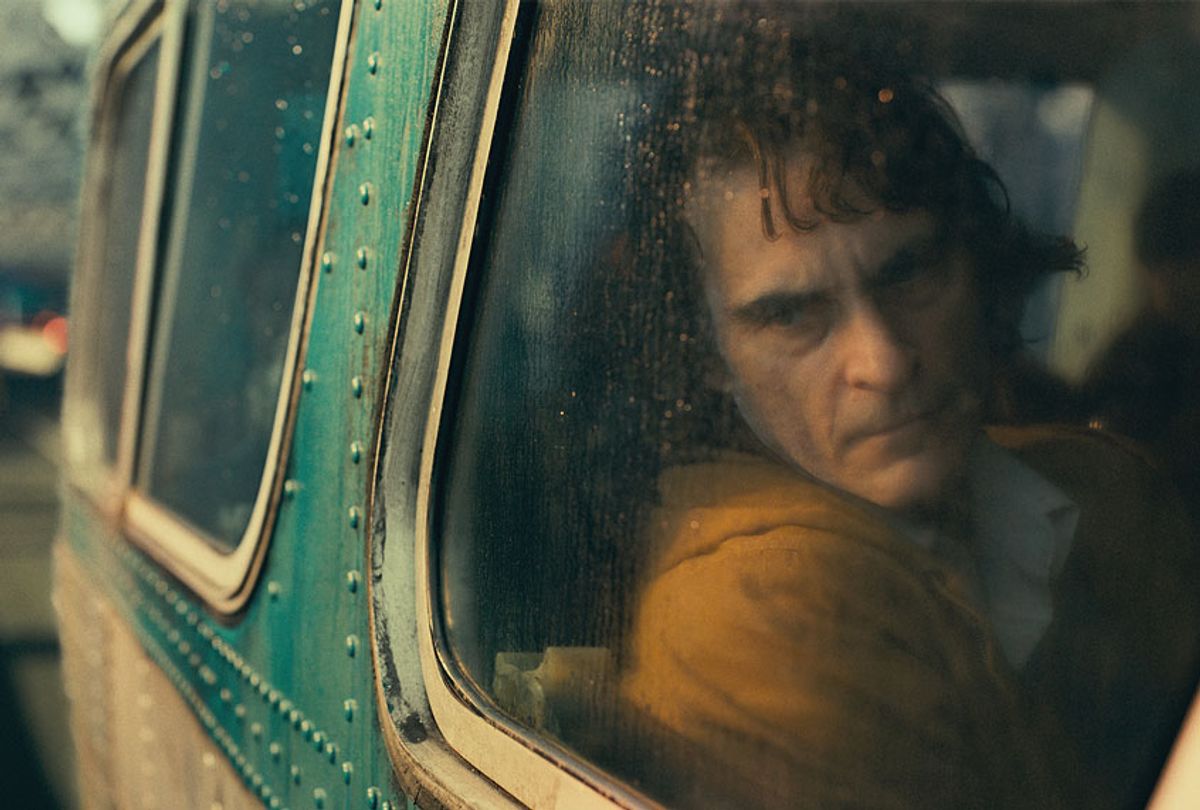 The following contains spoilers about major plot points in "Joker."

In January, Melissa Villaseñor of "Saturday Night Live" made people laugh — and aroused controversy — when she sang a song arguing that various Oscar-nominated films were really just about "white male rage," including the highest-grossing of the Best Picture nominees, "Joker."

To be fair, Villaseñor made this criticism of many other Oscar nominees, including "1917," "Once Upon a Time In Hollywood," "Jojo Rabbit" and "Toy Story 4." Having seen all of these films, however, and reviewed each one except for "Jojo Rabbit," I can safely say that the "white male rage" criticism is more apt when discussing "Joker" than any of the others, and that's precisely why, sadly, it could also win big at the Oscars.

"Joker" has a plot that, by design, feels like it came straight out of a Martin Scorsese movie. Arthur Fleck (Joaquin Phoenix), an impoverished and mentally ill party clown in a Gotham City clearly inspired by 1980s New York City, experiences regular persecution from his employer, his mother, and random people on the street. He aspires to be a famous stand-up comedian like his hero Murray Franklin (Robert De Niro), a talk show host who eventually finds a clip of his material and mocks him for it. Between that and an encounter with three businessmen that turns violent, Fleck gradually evolves into the infamous "Clown Prince of Crime" known as the Joker.

In addition to being a smash hit at the box office, grossing over $1.072 billion, "Joker" has also swept the Oscars with 11 nominations, including Best Picture, Best Director and Best Actor in a Leading Role (Phoenix). So how is it also a paean to the assumptions of those with white male rage?

White male rage, for those unfamiliar with the term, does not simply refer to a person who is white, male, and angry. It's the idea that there are certain white men who become angry without taking full stock of the privileges they possess, which other groups do not. It also refers to an unwillingness or inability to examine how their rage may be at least partially due to a sense of entitlement as well as legitimate grievance.

One of the best descriptions of white male rage came from an editorial penned by New York Times columnist Paul Krugman back in 2018, when describing the contentious Supreme Court confirmation hearings for Brett Kavanaugh:

"There have been many studies of the forces driving Trump support, and in particular the rage that is so pervasive a feature of the MAGA movement," Krugman wrote. "What Thursday's hearing drove home, however, was that white male rage isn't restricted to blue-collar guys in diners. It's also present among people who've done very well in life's lottery, whom you would normally consider very much part of the elite."

He added, "In other words, hatred can go along with high income, and all too often does." He further pointed out that this resentment, though sometimes driven by legitimate economic anxiety, is also fueled "by fear of losing status in a changing country, one in which the privilege of being a white man isn't what it used to be."

The film "Joker" is replete with examples of this.

One symptom of white male rage is the feeling of entitlement thwarted, the concept that because you are a white man, the things you want naturally ought to be given to you. Fleck benefits from the presumption that he deserves success, that his desire to be regarded as a great comedian is legitimate because of his position of social privilege. While no one deserves to be shunned or mistreated for being mentally ill (which happens to Fleck regularly in the movie), it is another thing entirely to say that someone with a mental illness deserves to achieve their wildest dreams simply because they want them. Fleck aspires to be a famous stand-up comedian, yet the movie makes it clear that he has no comedy talent. Fleck himself admits that there is nothing in his life that he finds particularly funny. Yet his thwarted comedy aspirations are treated as yet another injustice because, on some level, we assume that if a white man wants something, he is entitled to it. And throughout the experience of watching "Joker," one notices far more emotional emphasis is placed on his feeling entitled to the affections of a pretty neighbor, entitled to a relationship with a wealthy white man who he erroneously believes to be his father. When these things are denied him, that denial is framed as yet another injustice heaped upon a man.

Another symptom of white male rage, inevitably, is assuming that women and people of color are antagonistic toward you. It's the idea that if you are a white man, you are constantly besieged and ill-treated by people who are neither white nor male. Although "Joker" does include other white men as bad guys, a disproportionate number of them are women and/or people of color. Fleck is mugged for seemingly no reason by teenagers of color; his court-assigned therapist is a woman of color who alternates between being indifferent to him and giving him bad news; his supposed love interest is a woman of color who exists mainly to be an abstract object of desire, and eventually, one who brings brutal disappointment and humiliation; one of the strangers on the street who misunderstands and rejects him is a woman of color who scolds him for trying to make her young child laugh; and so on.

White male rage also involves not realizing how actions that would lead to dire consequences for non-white men are viewed as more acceptable when perpetrated by white people. One of the most astute analyses of this example of "white male rage" animating "Joker" came from Lawrence Ware in "The New York Times." "Consider his appearance on the live talk show hosted by Murray Franklin (Robert De Niro). A black man acting as strangely as Fleck does would not have been allowed to go on the air. But the white Fleck is given access, and bloodshed soon follows," Ware writes. Although Fleck is pursued by law enforcement for his alleged crimes, "his whiteness acts as a force field, protecting him as he engages in the violent acts of the latter half of the film."

Why white male rage is appealing to Oscar voters

Unfortunately, the chances are that this white male rage will only help the film's Oscar prospects. It makes perfect sense that this kind of movie might appeal to Academy voters, who are 68% male, 84% white, and almost all economically privileged. And this year's nominations bear this out.

"Joker" will also be aided by the fact that the frustration, resentment, and ire it expresses are widely felt throughout the United States. A nation that can elect Donald Trump as president and focus on reviving the careers of men destroyed by Me Too, quite obviously, is one that has not quite gotten over its presumption that white male entitlement is legitimate.

It also makes perfect sense that this is the kind of movie that less moviegoers would interpret as "deep" and "socially conscious" because it is addressing those sentiments felt so widely. The Oscars love to "explore what we're seeing and feeling in society" (a quote from director Todd Phillips about the film) ... but only if it is within the safe confines of white experiences. This is why tripe like "Green Book" and "Driving Miss Daisy," or only marginally better movies like "Dances with Wolves," have won Best Picture Oscars in the past. While they address genuine injustices like the persecution of African Americans or Native Americans, they do so from the vantage point of a white person, so as to remain firmly within the director's comfort zone. When they stray outside of that, such as with "Crash" or "Slumdog Millionaire," they still become problematic in either the simplistic way they confront race issues or the real-life injustices their creators commit against their actors.

But beyond the rage lies . . . nothing

Despite the film's acclaim and appeal, if "Joker" wins big at the Oscars, it will merely demonstrate how far American filmmaking has to go in producing material that actually speaks to the experiences of the marginalized — including many of the groups with which it is supposedly sympathetic.

The problem with "Joker" isn't that it depicts a man who is entitled and feels a resulting anger when denied, but that the film doesn't know what to do beyond this. And that leads to a hollowness in storytelling, which is exemplified in its approach toward social and economic injustices.

As I wrote in my review at the time:

"Yet those who oppose this unjust establishment aren't given a specific ideology, just explosively violent rage. It offers no solutions beyond 'burn it all down,' with the Joker openly (and somewhat disingenuously) disavowing any interest in politics during a climactic monologue. The desire to kill elites is instead driven by primal vengeance, not a desire for a new world order like the anarchism preached by Ledger's Joker and Tom Hardy's Bane in 'The Dark Knight Rises.' Given the movie's ultra-violent conclusion, the malleability of this aspect of its identity is also potentially dangerous."

The film also fails because Fleck's perceived injustices wind up being equated with the real injustices he faces due to his poverty and mental illness. Not only does it cheapen the film's half-hearted attempts to confront those problems (I elaborate more on that here), but it also blurs the distinction between real moral wrongs and imagined ones. And that's a missed opportunity to say something substantive.

Phillips has convinced people that his film really is about something profound when in fact it has very little of substance to say. That's another characteristic of white male rage: When you're an angry white man you benefit from the presumption that your anger is significant, profound even, and do not have to rise to the same standards as everyone else in order to prove it. The film has become a victim of its very subject.

The shame of it is that Hollywood needs movies that speak to the poor and those who struggle with mental illnesses. We need films that will broaden our perspective to those who are shunned, that will encourage us to react with empathy to those who are systematically denied it. And there are millions of white men for whom this is the case, whether because they are poor and mentally ill like Fleck or for other reasons. The point here is not that they should be denied this because they are white and male. Rather it is that we should make it clear that, on their own, being white and male are privileges, not hindrances. Similarly, our entertainment should avoid reinforcing the idea that if you are white and male but don't receive exactly what you want out of life, that does not constitute oppression.

Because the Oscars are a reflection on our society, and the seduction of white male rage remains potent, it is likely that these truths will not impact how "Joker" fares on Hollywood's biggest night.