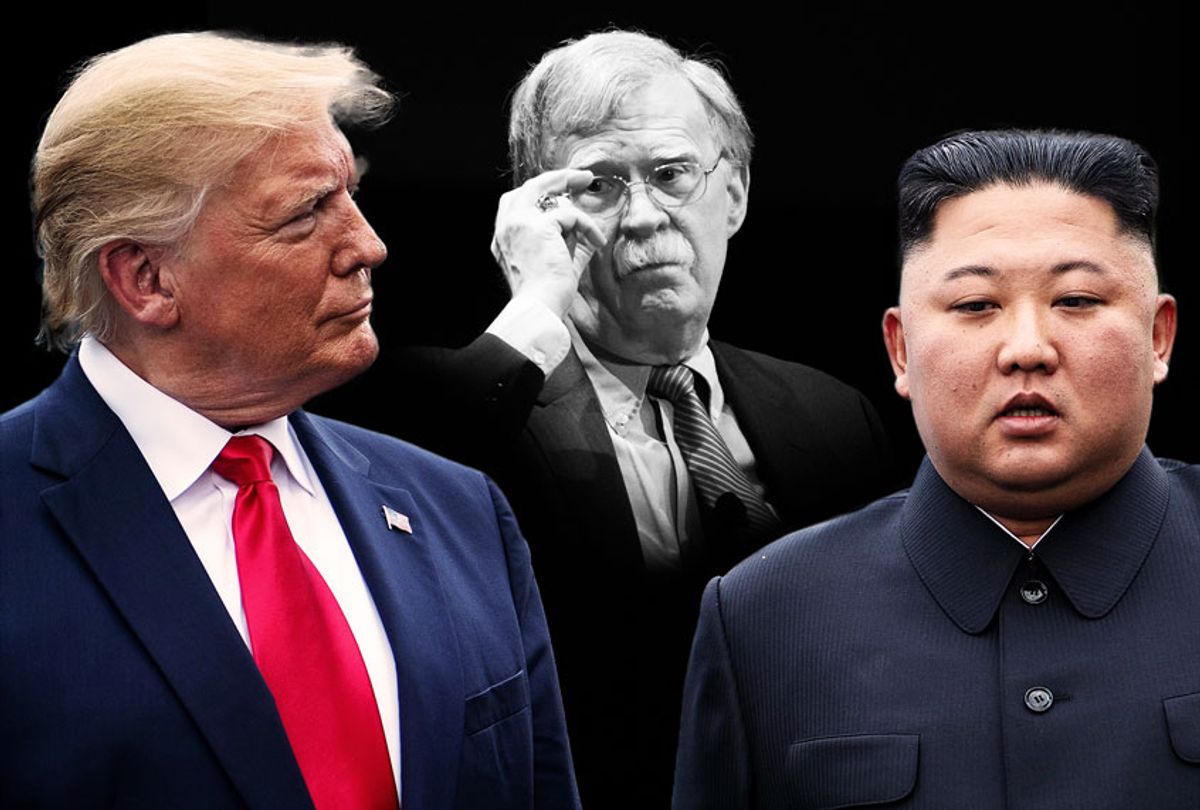 Former national security adviser John Bolton told an audience at Duke University in his first public remarks since impeachment that President Donald Trump's peacemaking efforts with North Korea amounted to "a wasted two years," because the country never plans to give up its nuclear weapons.

"It was perfectly evident it was going to fail," The Washington Post quoted Bolton as saying Monday. "There is not a single piece of evidence that the government of North Korea has made a strategic decision to give up the pursuit of nuclear weapons."

North Korea wanted to "break free" from international sanctions, Bolton said. He described North Korea as "jiving the Americans" as he claimed that the nation was getting closer to being able to drop nuclear weapons on U.S. cities.

When asked if he had shared his views on North Korea with the president before accepting a job in his administration, Bolton reportedly replied: "Well, I'd be happy to answer that question except part of this is now involved in the pre-publication review of my book."

Bolton also revealed concerns about what he described as the attempted "censorship" of his manuscript.

"I hope it's not suppressed," Bolton told the audience, adding that "I say things in the manuscript about what he (Trump) said to me. I hope they become public someday."

Though the White House is reviewing Bolton's book, it has not attempted to stop him from publicly discussing his experience working in the Trump administration.

In a leaked manuscript obtained by the New York Times, Bolton claimed that Trump directly told him that he wanted to maintain a freeze on $391 million in aid to Ukraine until it helped with investigations into his political rivals. Trump and many of his supporters have claimed that Biden abused the powers of his office to benefit his family. However, there is no evidence to support those claims.

Bolton also alleged in the manuscript that he raised his concerns to Attorney General William Barr when he learned about Trump's July 25 phone call with Ukrainian President Volodymyr Zelensky. That call was ultimately the subject of the whistleblower complaint which sparked Trump's impeachment by the House of Representatives.

When Bolton's accusations about Trump and Ukraine were revealed last month, Democrats called for the former national security adviser to testify in the president's impeachment trial. Trump's supporters lamented the timing of the leak about Bolton's book, with "Fox & Friends" co-host Brian Kilmeade saying that "now this gives fuel to the Senator Schumers of the world, Adam Schiffs of the world to say, 'I need a witness, and he wants to testify.'"

Trump responded to the leak by tweeting, "I NEVER told John Bolton that the aid to Ukraine was tied to investigations into Democrats, including the Bidens. In fact, he never complained about this at the time of his very public termination. If John Bolton said this, it was only to sell a book."

Though Bolton publicly supported Trump's policies when he worked for the administration, the president did not always back his national security adviser. During an interview in June in which he discussed the shooting down of an American drone by the Iranian government, Trump said that Bolton "is absolutely a hawk. If it was up to him he'd take on the whole world at one time, OK?"

Bolton is not the first American foreign policy expert to criticize Trump's actions toward North Korea. Speaking with Salon last year, former Secretary of State Madeleine Albright said that the Singapore summit between Trump and North Korean dictator Kim Jong-un was "a 'Kim win' because the President canceled some exercises that we have with our allies, the Japanese and the South Koreans, and it's unclear to me what the North Koreans gave or what it is that they put up to this, especially since they have not agreed to any kind of way of an inventory or international way of figuring out what they have and what denuclearization — which is what we are trying to get — what is the measurement of that, what's going on.