"The Hunt" has a MAGA agenda: Trump supporters desperately wish they were actually persecuted

Craig Zobel's horror flick is a fantasy for the conservatives who want to believe they are victims, not victimizers 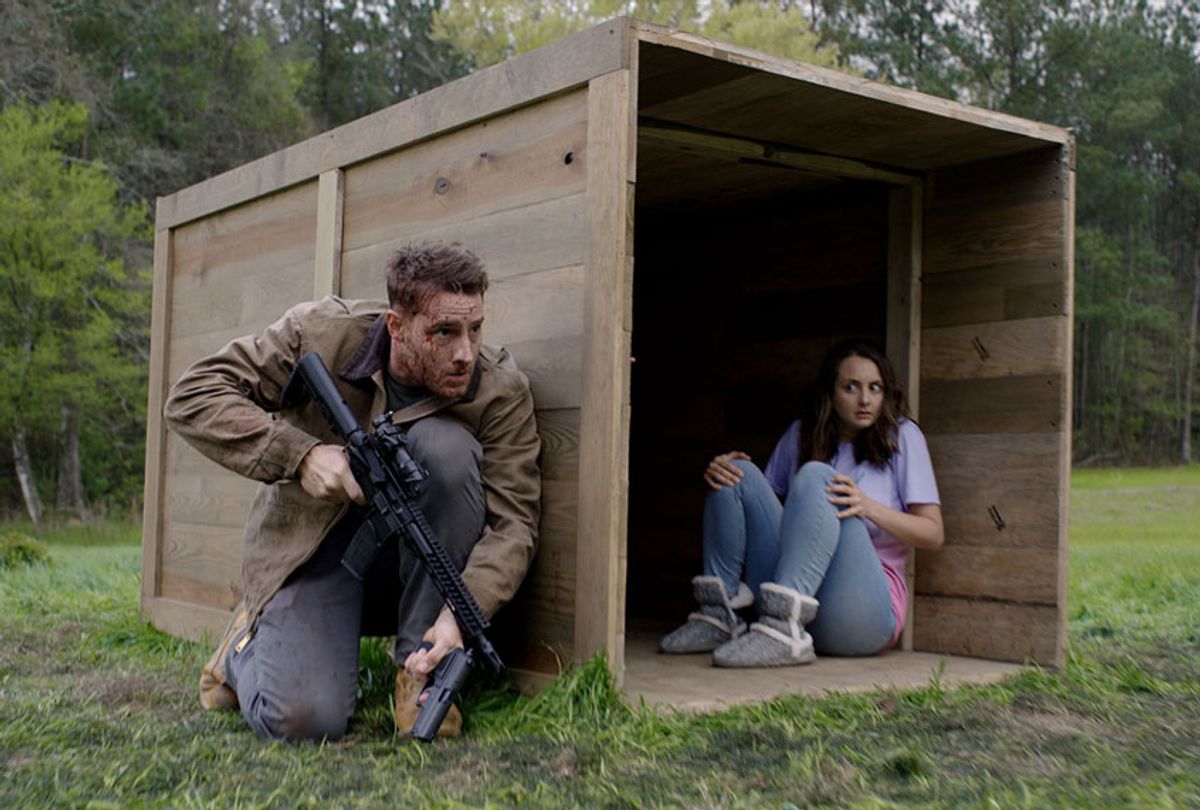 The following contains spoilers from "The Hunt," which you might as well read anyway because it's time better spent than watching the movie.

President Donald Trump's supporters aren't victims, they're victimizers. Shame on "The Hunt" for pandering to one of their most cherished fantasies – that they are persecuted.

I felt the need to begin this article with those two sentences because "The Hunt," a new horror film directed by Craig Zobel ("Compliance," "Z for Zachariah") and written by Nick Cuse and Damon Lindelof ("Lost," "Star Trek Into Darkness"), tells the story of liberal elites who kidnap 12 conservatives — heavily implied to be Trump supporters since they're often referred to as "deplorables" —  in order to hunt them for sport.

There isn't much in the way of plot in "The Hunt." The Trump supporters are picked off one by one until only two survivors remain (played by "GLOW" star Betty Gilpin and Wayne Duvall) and they turn the tables on the liberal elites (the leader is played by Oscar winner Hilary Swank). There are a couple of plot twists thrown into the narrative to give the illusion of cleverness, but the film's entire story could otherwise fit on the back of a postcard. None of the kills are particularly memorable, all of the characters are two-dimensional stereotypes, and the pacing is so brisk that the movie feels like it's over before it has had a chance to start. Even if "The Hunt" were completely apolitical, it would still be mediocre and forgettable.

Alas, "The Hunt" is very much about politics — namely, validating right-wingers who desperately want to believe they are among the wronged of the world. While Zobel has said that the movie's goal is to "poke at both sides of the aisle equally," there are three problems with that statement. The first is that an early draft of the script reportedly depicted working-class conservatives as the heroes, suggesting that the film always had a pro-conservative agenda. (Although, it should be noted that Gilpin's character Crystal, is actually an apolitical schmoe who was hapless enough to get mixed up in this business because of liberal incompetence.)

The second is that the film's attempt at "balance" is to reveal near the end that there this brutal hunt never actually existed until right-wing conspiracy theorists incorrectly accused several liberal elites of participating in one, thereby inspiring them to actually create it. It's a "twist" that still manages to make the liberals into monsters and the conservatives into, at worst, fear-mongering fools . . . and is also the only significant shade thrown at the pro-Trump side in this story.

The third, and by far most important, problem with Zobel's statement is that it reduces politics to a game, cheapening the real-world issues that impact people's lives and making it all seem like so much pointless bickering.

Take the issues cited by the film's liberal elite bad guys. As I watched the film I made a mental list of the most prominent issues that they cited as justification for conducting a hunt: Gun control, global warming, anti-racism, immigration, gay rights. These are not issues in which each side is morally equal. Wanting to save lives from gun violence is not equal to perverting the Second Amendment to satisfy right-wing delusions. Striving to stop climate change from destroying civilization is not equal to denying it because conservative dogma demands you to do so (and note how Trump's anti-science agenda has exacerbated the COVID-19 outbreak in this country). Being horrified by how Trump has stoked the flames of bigotry in this country is not equal to being okay with or outright supporting it. Empathizing with undocumented immigrants is not equal to persecuting them. Supporting gay rights is not equal to the bogus claims of "religious freedom" cited by those who hate the LGBTQ community.

These are only a handful of examples from the film. The movie also references issues like cultural appropriation, anti-Semitism, the AIDS epidemic, abortion rights, atheism, and food safety concerns, and has characters use partisan nomenclature like "cuck," "snowflake" and "deplorable." (Even Fox News host Sean Hannity, the ultimate deplorable, gets a shout-out). The writers seemed to believe that merely acknowledging that something exists is tantamount to making a meaningful observation about it, a problem with much of modern American satire. Unfortunately, because most of these boxes from the Trump-era zeitgeist are checked for the sole purpose of giving the villains a motive for hunting the heroes, the message winds up being that liberal political concerns are nothing more than an excuse for putting one group of people in Team A and another in Team B.

Yet the difference between the pro-Trump and anti-Trump camps is not Coke versus Pepsi, Tweedledee versus Tweedledum. By telling a story based on that premise, and then have the liberals take things too far by actively hunting Trump supporters, the writers of "The Hunt" encourage right-wingers to believe something they yearn to convince the world is true — namely, that they are the victims in modern America.

It doesn't take much intuition to glean why they want to feel this way. Most people don't want to view themselves as bullies and aggressors, so when their beliefs lead to malevolent results, they have to come up with rationalizations that justify them. This is why conspiracy theories like QAnon and Pizzagate remain so popular in right-wing circles. It is why white nationalists claim that they are being "replaced" by non-whites rather than admit that they aim to recreate explicitly white supremacist social hierarchies. It is why Trump depicted himself as the victim of a deep state conspiracy — to thunderous applause — when he was investigated after his campaign colluded with Russia to defeat Hillary Clinton in the 2016 election, and did so again after he was impeached for trying to extort Ukraine into helping him defeat Joe Biden in 2020.

It is why conservatives, when trying to vilify liberals, love to depict them as out-of-touch, wealthy elitists, even though right-wing ideology blames the poor for their own poverty and diminishes or outright denies how in modern America, the rich oppress the working class, white people oppress non-white people, cishet people oppress the LGBTQ community, men oppress women, and Christians oppress non-Christians. No one wants to believe that they are the bad guy in the movie of life, and what better way to convince them of this than to release a movie in which they are blameless victims literally hunted for their conservative convictions?

In retrospect, it is poetically fitting that the very assumptions encouraged by "The Hunt" nearly lead to the film's own undoing. When the movie was supposed to be released last year, it was swiftly attacked by Trump himself, who said it was intended "to inflame and cause chaos," claimed it was made by people who "like to call themselves 'Elite,' but they are not Elite," and said it proved that Hollywood is racist and "full of great Anger and Hate!" He also implied that the movie would provoke violence, and after the mass shootings in El Paso, Texas and Dayton, Ohio, Universal Pictures decided to cancel its release at the time. While the movie executives would like us to think it was because of the fear of mass shootings or respect for the victims, the fact that the release was canceled so shortly after Trump denounced the film as dangerous makes it difficult to believe that his opposition wasn't a crucial factor.

To be clear: I do not support censorship. As reprehensible as "The Hunt" is, I do not question the filmmakers' right to create it. I also do not wish harm on anyone who disagrees with me. The point of this article is not to say that "The Hunt" shouldn't have been released, even if I can't help but smirk at the irony of Trump trying to suppress a movie without realizing that it's a love letter to his supporters. The point is that if you want to watch a thought-provoking, socially responsible horror movie, you can check out "The Invisible Man" or "Midsommar" or "Get Out."

"The Hunt" isn't satire; it is propaganda of the lowest sort. If you agree with this movie's message, there is something seriously wrong with your soul. Its only value is in helping dispel the myth of Hollywood's supposed liberal bias.

"The Hunt" is currently playing in theaters.