Inside Netflix's "Innocence Files": "The system is set up to attain convictions" 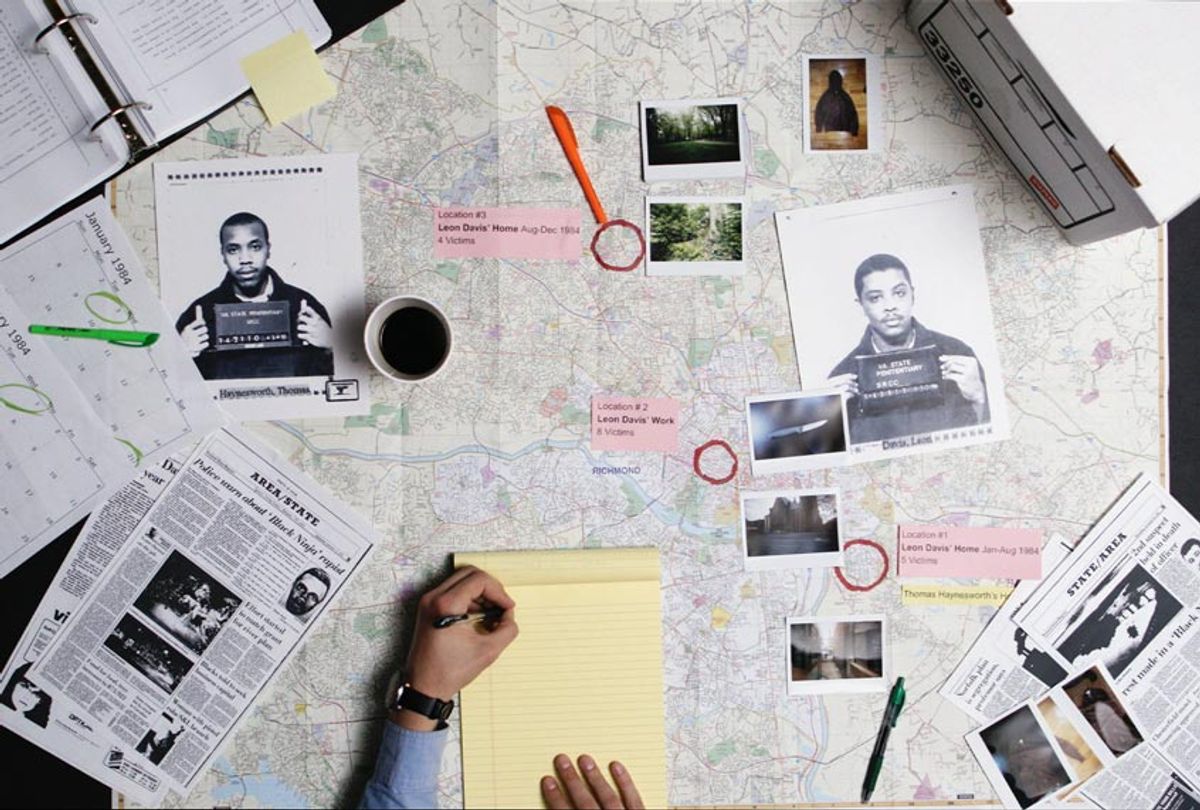 We know that the American justice system promises all of us the presumption of innocence. We also know it often doesn't live up to that ideal. And whether it's because of overt corruption, investigative incompetence, or faulty evidence, there remains a vast population of prisoners currently incarcerated for crimes they did not commit. But the past few years have seen a dramatic shift, and the reinvestigation of controversial cases has resulted in the overturning of an unprecedented number  wrongful convictions, most notably the men who became known as the Central Park Five.

Innocence Project has been a huge part of that movement, advocating on behalf of the wrongfully convicted and working on the front lines of justice reform. Now, a new Netflix documentary series explores the stories of eight individuals who were imprisoned for years for violent crimes they didn't commit. Executive produced by    Liz Garbus ("Lost Girls"), Alex Gibney ("Citizen K," "The Inventor: Out for Blood in Silicon Valley," "Going Clear: Scientology and the Prison of Belief") and Roger Ross Williams ("American Jail") — they also directed several episodes — "The Innocence Files" is a sobering, shocking exploration of our often overeager and myopic system, yet it's also a moving testament to the power of human tenacity — and its capacity for forgiveness.

Salon spoke recently via phone with the three acclaimed filmmakers on the series, "the 'CSI' Effect" and what all of us can do to make the justice system truly more just.

How did this project come together to make this story happen?

Alex Gibney: I don't know who was first. I just got contacted by Netflix, and as soon as they said "Innocence Project," I said yes.

Roger Ross Williams: Same with me. I got a call from Netflix. They told me about it. Like Alex and like Liz, I've been admirer of the Innocence Project for a long time, and I said yes right away.

You've all worked before on stories about justice, about incarceration, about the legal system. This is such a unique project, it feels like one seamless story. How did you collaborate on that? Because it feels very much of a piece.

Liz Garbus: I guess that's maybe because the themes are so tragically linked. As Roger and Alex said, Netflix put this together. They made this incredible deal with the Innocence Project to open up their case files, and then they brought us in. We had an opportunity to take this really broad look at how innocent people end up going to jail, which then just points to the larger systemic failures of the criminal justice system.

We all worked independently of one another, but the themes are so linked, in the problems that stem from issues around race and the disregard of black lives that underpin many of the these stories, as well as the justice system, which is set up to attain convictions above all else. And so I think that they're linked because they're thematic.

It is also a story of forgiveness, in a way that made me really rethink retribution and justice. Was that something that you went into it consciously looking for? It kept coming up again and again, with the people in the justice system, with these formerly incarcerated individuals and their families. It was very surprising to me as a viewer, and very powerful.

Gibney: In the case of Chester Hollman, that was not something I expected. [In 2019, Hollman was exonerated for a 1991 Philadelphia robbery and murder.] Chester had been in prison for [more than] 24 years, and his ability to maintain equanimity and a sense of grace upon his release was striking to me. He had maintained a sense of compassion, even for his oppressors, in a way that was staggering. It does give you pause, particularly when innocent people are unjustly convicted, to think about the way our our justice system and our system of mass incarceration is constructed. It's really designed in ways that are inhuman. In the face of that inhumanity, when you see, people respond with such grace and generosity, it does take your breath away.

Garbus: I also have a counterpoint to that. You saw extraordinary stories where there were outcomes reached that were unusual. Because no matter how much the Innocence Project works, there are going to be many, many, many cases they are not getting to.

For instance, in the case of Thomas Haynesworth, what was interesting was that Janet Burke was the only rape victim in that case who was willing to come out and speak, and to sit with Thomas and confront this terrible tragedy. [In 2011, Hayesworth was exonerated for a string of sexual assaults which occurred Richmond in 1984.] She was raped. And then she had, through no malice of her own, thrown somebody else's childhood and life in the same way that the rape had destroyed a part of her life that she'll never get back.

There were other victims who, through no fault of their own, were convinced through a photo lineup that was shown to them with suggestions by police that we now know were improper and led to wrongful convictions. But many of them are still in that painful place of believing that Haynesworth is guilty. I can only imagine how much courage and strength it does take to be able to get to where Janet Burke was, and then for Thomas to be able to forgive her for stealing the better half of his life. So I do think perhaps it's more the exception than the rule if the facts in that one particular case point to anything.

We get our cues from what we see on television and the quest for justice is so strong. There's a line in the series, "Someone walks into a courtroom wearing a lab coat, they must be telling the truth." There is such great misapplied trust in the system, particularly with regard to science. Did you find your own concepts about what justice or science evidence looks like change because of doing this?

Williams: Absolutely. I think with respect to evidence, people are so used to watching shows like "CSI" and prosecutors and DAs call it the "CSI" effect. They expect to be razzled and dazzled in the courtroom. People aren't aware that things like bite mark evidence or blood splatter or tire marks or footprints, all this stuff is junk.

For me, it was completely eye-opening, because so many people have been convicted on this type of junk science. The Innocence Project, this is really the tip of the iceberg. For instance, 49 states still accept bite mark evidence, but it's been debunked. So if those 49 states actually threw out bite mark evidence, they would have a duty to correct that would be overwhelming for those systems. Hopefully with this show, with watching "The Innocence Files," people will begin to push for change around around this junk science.

It's very clear you all want to effect change in the world. What do you think we as viewers who see what happens to individual lives and to families because of wrongful conviction can be doing right now to tip the scales of justice?

Gibney: It's possible. I think that the cases here all point toward potential systemic solutions. You can hold prosecutors to account, and that will hopefully change their behavior over time. Conviction integrity units, where prosecutors work with defense attorneys, to look for the truth rather than to pursue some notch in the belt adversarial goal. That is a tremendous boon.

Let me inject a slightly contrarian note here. One of the things that I discovered, not only through the films I make, but also watching the work of Roger and Liz, is that to some extent the justice system does what we have done as filmmakers. The justice system tries to tell stories. And it's usually the most compelling stories, not always a true story, sometimes a fictional story, that ends up convincing people to convict people and leads to a kind of certainty.

And that certainty can be a very dangerous thing, because once people are viewed with that sense of certainty, they don't want to go back and admit that they might have made a mistake. I think that while it's important to advocate for change as documentarians, it's nevertheless also important to include inconvenient facts and to remind people that uncertainty itself is important. Generally speaking, as human beings, we're not rational. We're rationalizers. One of the ways forward, to reform the system is to just remind people that this isn't a perfect system. We have to have checks and balances. And somehow uncertainty itself in storytelling can be precious, because the shadow of a doubt can be an important way of getting to the truth.

Garbus: It's such a great point. As with "Lost Girls," I'm telling that story before there was an ending. I think that it is incumbent upon us as storytellers to dwell in the gray because that is life. Not all stories. Let's let people who do it well make comedies and love stories that have happy endings. But for those of us who films different ways, to embrace the gray is really quite important. To talk about hope, everybody who watches this, people who watch Netflix, they'll be on juries. Conversations need to happen that people say, "I saw this show once where it said bite marks don't work." Those kinds of conversations you can't calculate. It's not enough. It's systemic. But the hope is that slowly over time it becomes part of public consciousness.

We live in such a polarized culture, where there is such pressure to pick a side. How does that affect you as a storyteller trying to weave nuance into the work that you do?

Willams: I think around the issue of criminal justice, there are now beginnings of bipartisan reform happening. There is a conversation happening. It's one of the few issues where there is a dialogue happening between both sides, and that's great.

It's important that because of the reach of Netflix, people across the country actually begin to understand what is happening in our criminal justice system and reach out to their politicians and encourage more of a bipartisan effort. And when you have, dare I say, people who in pop culture like Kim Kardashian advocating on behalf of criminal justice reform, it's huge. It's actually a big thing. And when you have, Netflix, which has a massive reach, creating stories like this, it's huge. It gives me hope that we can begin to have these sort of conversations. And that includes the conversation around race and the role that race plays in the legacy of slavery in this country. We can't reform the criminal justice system without having that conversation.

"The Innocence Files" is available now on Netflix.