It's no good browbeating Trump fans about social distancing. It will never work, and is likely to backfire 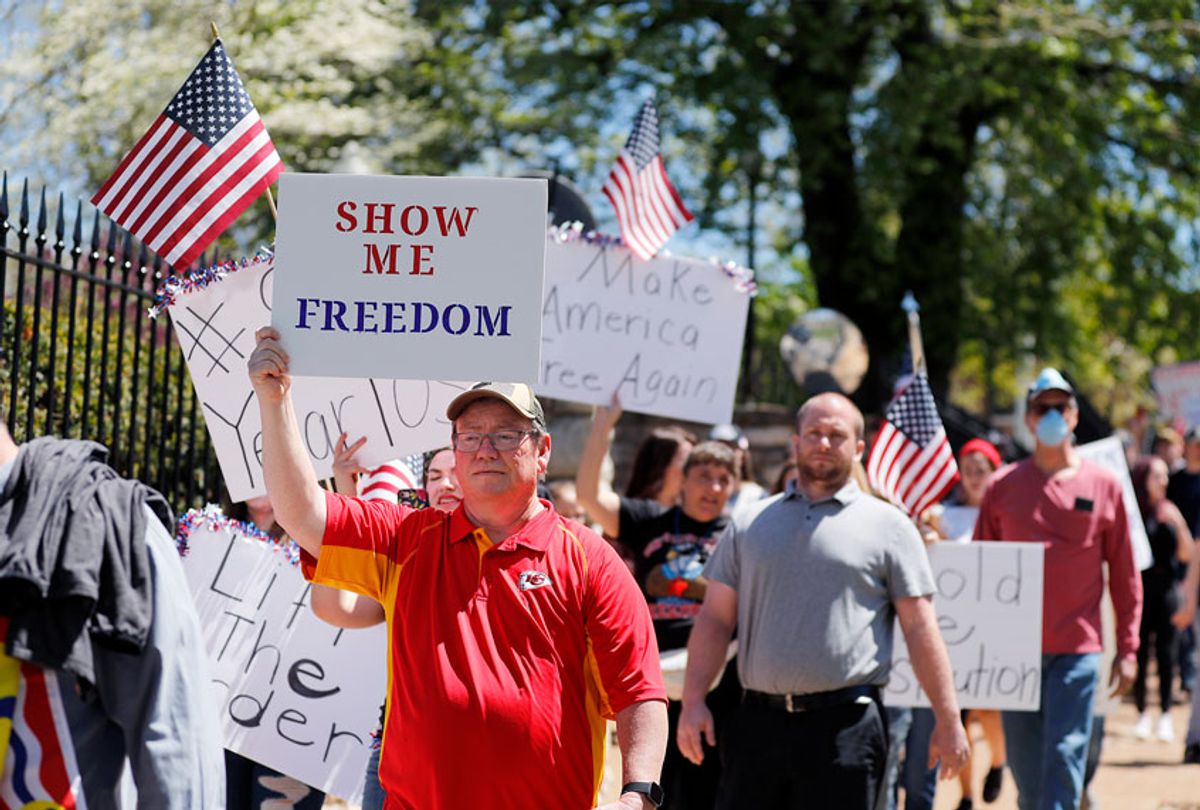 Despite Donald "Why Not Shoot Up Lysol?" Trump's unsubtle yearning to "reopen" the economy (which won't work) and let the novel coronavirus run rampant, a new poll from the Washington Post and the University of Maryland shows that strong majorities of Americans think that's a really stupid idea. Eight out of ten Americans took one look at the yahoos protesting the lockdowns in various state capitals and said, nah, living is more important than being able to order that 400-calorie vanilla-hazelnut frappuccino inside the Starbucks instead of from the drive-through window. Despite the mighty efforts of Republicans to create a false dichotomy between saving lives and saving the economy, it appears most Americans understand that Americans can't go back to work if they're laid up or dying from COVID-19.

These poll numbers are likely cold comfort, however, to those who have family members, especially parents, among the 17% of Americans who think the social distancing orders are too restrictive. It's a group that's largely composed of Fox News addicts and Trump superfans, who are more inclined to believe the coronavirus is being exaggerated — or is even a hoax — because their beloved cable "news" channel has been telling them just that.

(To be clear, this group is a minority even among Republican voters, only 27% of whom oppose the coronavirus restrictions.)

Anyway, these folks are often indifferent or even hostile to the social distancing recommendations, and are engaging in all kinds of behavior that put them at a higher risk of contracting the coronavirus. So right now, a lot of adult children and other relatives of Fox News addicts — who tend to be senior citizens — are stressing out badly, fearful that their family members will catch a disease that tends to kill older people at a much higher clip.

Sam Stein at the Daily Beast profiled some of these families, which are often split between rabidly right-wing parents and more politically progressive kids. These kids love their parents, even as they disagree with them fiercely about whether it's okay to vote for a wannabe fascist whose laziness and aversion to reading made him ignore more than a dozen daily briefings warning him about the coronavirus in January and February. So they're starting to panic, watching their parents ignore the social distancing recommendations and risk severe illness or death out of misguided loyalty to Fox News and President Inject-It.

Understandably, the kids describe mounting pressure campaigns on their parents, and even trying to leverage visitations with the grandkids, to convince MAGA-Mom and MAGA-Dad to stay home and stop socializing. It isn't working.

As one woman put it, "I genuinely believe that if Fox started reporting something as ridiculous as 'only people with naturally red hair can get coronavirus,' my parents would believe it."

While the temptation to browbeat one's family members is understandable, it's almost certainly a waste of time and an unnecessary stress factor for those whose parents are already this far down the Fox News rabbit hole. As I've been writing about throughout the Trump administration, the grim reality is that the ego protection matters more to Trump voters than facts, logic or, for the most hardcore, even their own personal health. To admit they were wrong in voting for a man who suggested cleaning out the lungs of coronavirus patients with household disinfectants is too humiliating. And so it's easier, for this 27% of Republicans at least, to buy into conspiracy theories that the virus is an exaggeration or a hoax than to admit to themselves that they made a dreadful mistake in voting for this dangerous moron.

In fact, browbeating Trump-worshipping relatives about the coronavirus is likely to backfire — it'll only make them more likely to go to parties, refuse to wear masks or make unnecessary trips to the store "just to pick up a few things."

"In fact, head-on attempts to persuade can sometimes trigger a backfire effect, where people not only fail to change their minds when confronted with the facts — they may hold their wrong views more tenaciously than ever," as science writer Chris Mooney explained in a 2011 article for Mother Jones.

This was first shown in a 2006 study that showed that when conservatives were presented with proof that Saddam Hussein did not have weapons of mass destruction — which was the Bush administration's pretext for the Iraq invasion — they dug their heels in even harder and insisted more fiercely that Saddam did so have WMDs. Subsequent research has shown this same effect on people with a wide variety of misguided beliefs.

Anyone who has argued with someone who is deeply wrong about something has experienced this problem. If you offer them incontrovertible proof of their wrongness, they feel embarrassed and get angry. They view you, the person who is actually right, as a smug know-it-all. In order to protect their ego, they embrace a defiant persona, that of someone who will seek revenge for this humiliation by clinging even harder to the wrong belief.

This is the "stick it to the libs" mentality in a nutshell. For right-wing parents with liberal children, it's likely that the backfire effect is even more pronounced. Admitting that people you trained to use the potty are now more broad-minded and knowledgeable than you, especially about something as personal as your political views, is a painful humiliation for the parents of Fox News nation. So instead of admitting that their kids might have a point about the dangers of this virus, parents who are already in denial are likely to dig in deeper if they're feeling pressured.

As hard as it may be to swallow, the best thing to do, if you have parents who prefer to listen to Diamond and Silk rather than public health officials, is not to argue with them. In this time of crisis it's more critical than ever, for the sake of everyone's mental health, to understand what you can control and what you can't. Parents or other family members who have decided that loyalty to Trump is more important than their health go in the "can't control" column.