This four-ingredient chocolate fridge cake is fit for a king, and no baking is required 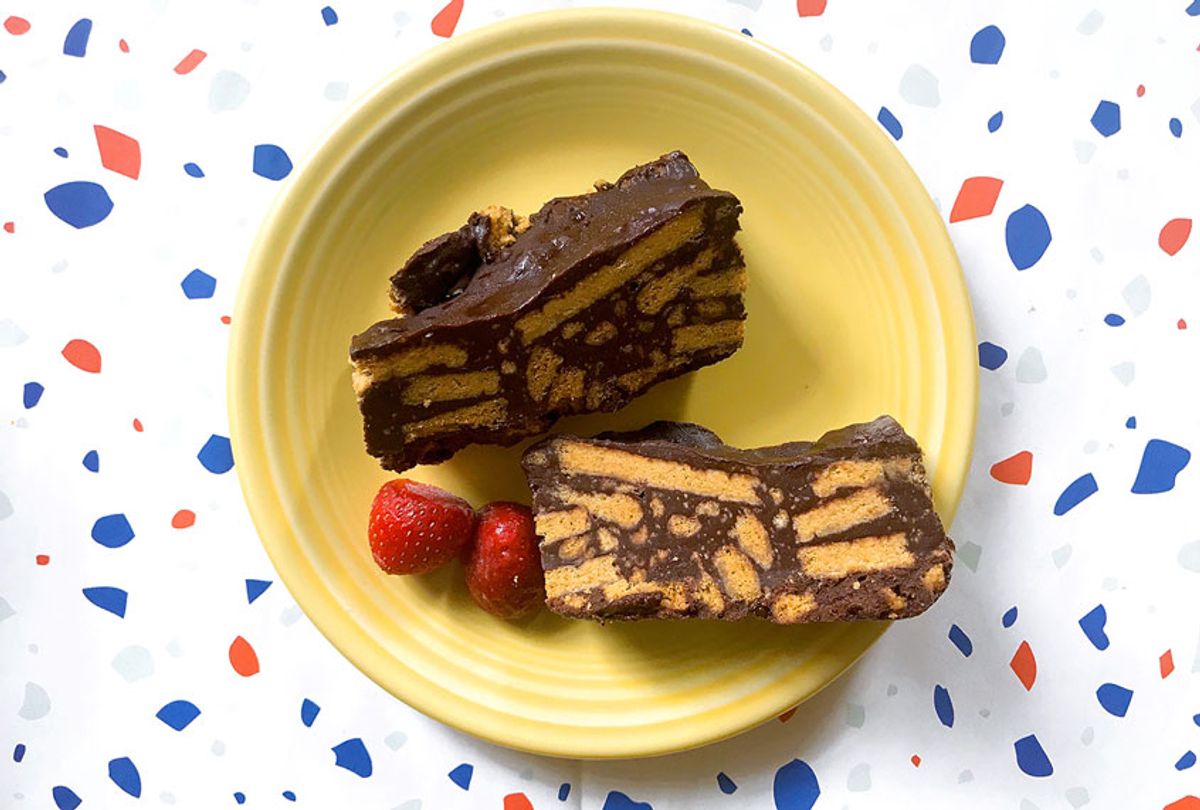 It didn't have a name, at least not one I knew. It was just a stubby slice of what looked like a chocolate terrazzo tile, a welcome sight at the end of the school cafeteria line. It would haunt my dreams for eons, until a prince brought it back.

I first encountered my dark obsession during a college semester in Ireland. Unlike "Normal People's" Marianne and Connell, my own experience at Trinity was not marked by tortured romance or more than five minutes of direct sunlight. What I remember most now about that time was being constantly cold, almost always hungover and a place on campus called The Buttery, where they sold something that tasted like a Twix bar but better and without the caramel. It was a perfect after class snack, an exquisite end to a cheap lunch and a buzz-inducing breakfast. It was only after I returned home and was deprived of it that I realized — as had been the case with so many of my youthful infatuations — I had never stopped to ask for a name.

Somehow, despite years of periodically describing it to others and searching for it on subsequent trips abroad, I never found my love again. "It's kind of like millionaire's shortbread," I'd explain to people, "but not as . . . fancy?" And I'd be met with blank stares.

Then long after I'd forgotten my quest, the British monarchy threw me a bone. Because guess what the Queen of England and I have in common, besides a fondness for corgis? Guess what William had as his groom's cake when he married the former Kate Middleton?

I live year-round at the intersection of obsession with the royal family and obsession with dessert, so it was inevitable that back in 2011, I was getting Google alerts about what was being served at the royal wedding reception. What I hadn't expected would be there along with an intricate, eight tier fruit cake for the bride was a gussied-up version of something any commoner could throw together with supermarket staples.

There was my humble cafeteria snack, a simple combination of chocolate and McVittie's Digestive Biscuits. It wasn't just a welcome relief to finally know what I'd been hungry for all those years. It was like discovering the queen serves Rice Krispies treats at state dinners.

Once the fridge cake came back into my life, it never left again. Because it literally involves breaking things, it's a breeze to make with kids. It requires no baking and minimal chilling — it's entirely delicious when it's still at the just barely holding together stage. And best of all, it's infinitely customizable. After you learn the general formula, the only limit is your imagination.

I usually make my fridge cake in a sightly modified manner for American grocery shopping. It's not difficult to find digestive biscuits — a deceptively plain, outrageously addictive cookie somewhat in the vein of graham crackers, Maria cookies or Social Teas — in my local supermarket, but you can use just about any store bought cookie you like. The cake would be fantastic with Nilla Wafers, ginger snaps or Biscoff.

And while my melting chocolate of choice is Ghirardelli Bittersweet 60%, imagine what you could do with milk chocolate, white chocolate or even butterscotch chips. Likewise, because I never met a stick of butter I didn't want to brown, I use browned butter here, but melted butter is fine, too. And while tradition calls for that English staple, golden syrup, to hold it all together, I prefer readily available corn syrup. Honey would be a fine substitute, as well.

Any way you make it, it's the contrast — along with the fact that it is legitimately delectable — that always makes fridge cake a winner. It's velvety and crumbly. It's salty and sweet. It's a snack whose main ingredients you can pick up at the checkout aisle and a cake that's truly fit for a king.

1. Line a loaf pan with parchment paper. (You can also use a springform pan or 9 inch cake pan.)

2. Put the cookies in a Ziploc bag and break them up with a rolling pin or similar. Stop when you have a mix of differently sized broken pieces — you're not aiming for crumbs here.

3. In a large pan, melt the butter over medium heat. (Optional: Keep the butter on the heat a few minutes longer, until it has foamed up and browned.)

4. Remove the pan from the heat and add the chocolate and syrup. Stir until well combined.

5. Reserve a few tablespoons of the chocolate mix for your glaze.

6. Add the broken cookies to the pan, stirring until they are well combined and coated.

7. Pour the mixture into your pan, gently pressing down into all sides. The cake will be jagged and lumpy.

9. Chill at least one hour. Bring to room temperature before unmolding and serving. Ascend to the throne.