Think the new "Unsolved Mysteries" is scary? The original will freak you out 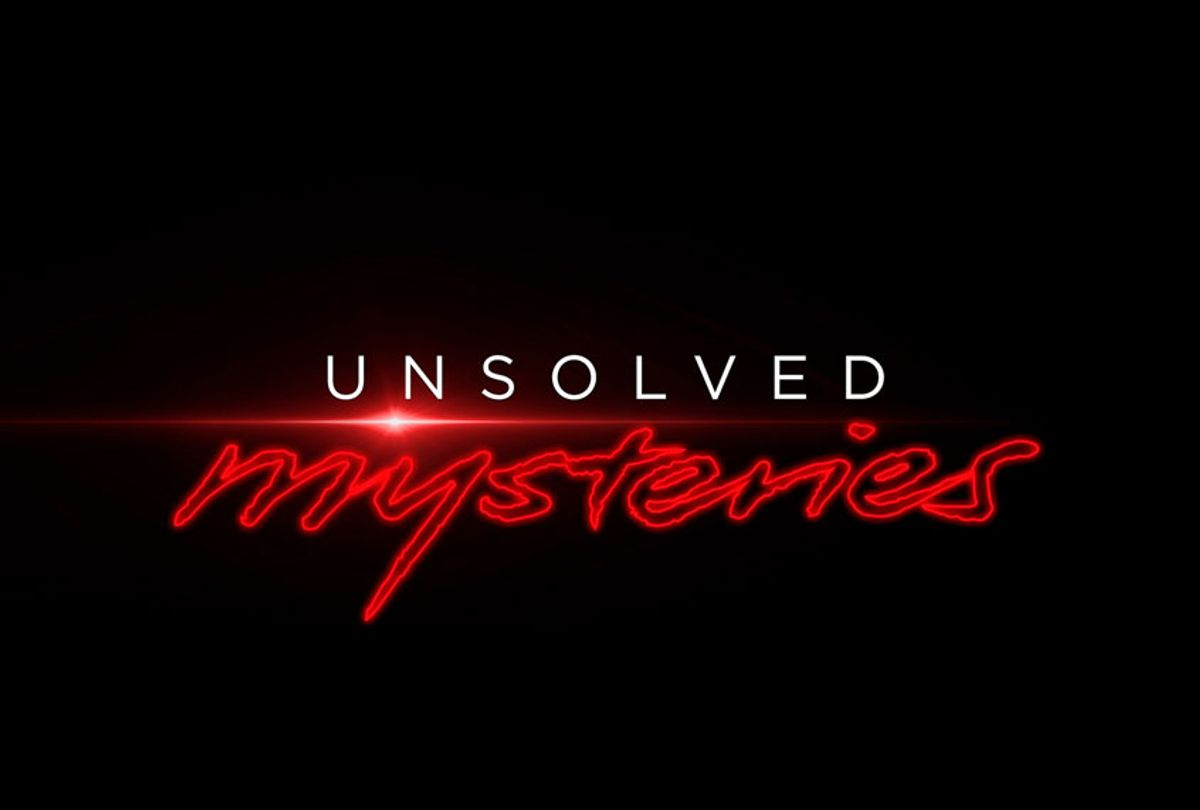 The original "Unsolved Mysteries" is available to stream on YouTube and Amazon Prime.

When you ask true crime fans to trace what first awakened their obsessions, you'll notice certain recurring themes. Maybe it was a "That could have been me"-style case, often involving someone close to their own age. Or it was a crime so shocking it made national news. Or perhaps it was an ominous TV theme song, the kind that could make the hairs on the back of their necks rise. For legions of us, "Unsolved Mysteries" delivered all three.

The long-running and oft-rebooted series arrived this past week in its newest incarnation, tailor-made for the same viewers who turned "The Jinx" and "Tiger King" into surprise hits. Combined with HBO's "I'll Be Gone In the Dark," Netflix's "Unsolved Mysteries" makes for abundantly chilling summer content. But the lo-fi original can still scare the pants off you.

I grew up in an era that seemed uniquely rife with serial killers and disturbing crimes. As a child, I watched the sagas of Ted Bundy, Son of Sam, and the Atlanta Child Murders unfold on television in real time, right before my young, impressionable eyes. I also had a  mother who could offhandedly reference the acts of Richard Speck, Zodiac, the Boston Strangler, and the Manson Family the way other parents reel off baseball stats. (My grandmother, meanwhile, channeled her true crime obsession into all things mob-related.)

By the time "Unsolved Mysteries" launched in 1987 — squarely between the  Preppy Killer case  and the disappearance of Tara Calico — I was a ready-made natural audience for it. And watch it I did, for years and years and years. I watched even when I was living alone in a not great neighborhood and checking under my bed every night. I only gave up on the show  when I eventually moved in with my then-boyfriend — not because I felt safer, but because all things true crime made him squeamish.

"Unsolved Mysteries" began its life as a series of specials, hosted by actors known best as fictional crime fighters — "Perry Mason" star  Raymond Burr, "The Streets of San Francisco's" Karl Malden, and Robert Stack of "The Untouchables." Each episode would take on a few different cases, combining interviews, narration, and re-enactment to present mysteries that you, the viewer, were then invited to help solve.

When NBC picked it up as a series, Stack became the show's permanent — and to many of us, definitive — host. Dressed like McGruff the Crime Dog and channeling his same traumatizing diction, Stack was an essential component of the show's eerie tone. The schtick may sound a little cheesy, but if you've ever actually watched the show, you know how spookily effective it was. Good luck getting the sounds of, "A popular girl has been abducted — and possibly murdered" or "The charred remains were eventually identified" — out of your head when you're drifting off to sleep and there is definitely a creaking sound coming from right outside the house.

But there was so much more to the "Unsolved Mysteries" successful, terrifying formula than Robert Stack's  world-weary deadpan.  For starters, there were those reenactments. On a series DVD commentary, director David Vassar admits, "In the early episodes, if there were any reenactments, we actually had the real people play themselves. The acting of these first seasons when we were just getting our feet wet was not up to snuff. As we went through the seasons, we were able to pay top dollar and get good people, so it just got better and better." Yes, and also having people retrace the steps of the violent and terrible experiences of their lives probably wasn't a sustainable system.

There was also the crowdsourcing element of the series, a device that's influenced generations of true crime fans. "For every mystery, there's someone, somewhere, who knows the truth," Stack would intone directly into the camera at the top of the show. "Perhaps that someone is watching. Perhaps it's you." And then your blood would run ice cold and then the theme music would rise.

With the near-simultaneous arrival of "America's Most Wanted," overnight, watching prime time television seemed like something of a civic duty. And it actually worked, pretty regularly. In a Reddit Ask Me Anything three years ago, the show's creators Terry Dunn Meurer and John Cosgrove said that "Over 340 cases have been solved, many by viewer tips that came in immediately following the broadcast."  You can still submit tips online, even if you can no longer hear Stack periodically announcing, "UPDATE" over footage of some murder suspect being hauled in.

The cases themselves were often horrific. Casual followers of crime might recognize some of the cases covered on the series, like Zodiac, D.B. Cooper, or Lizzie Borden. But where the show excelled was in finding really novel nightmare fuel. I have not watched the Ethel Kidd segment — a case involving an abduction, rape, murder, and a series of seriously harrowing clues — in nearly 30 years. I don't need to, because the original experience of viewing that episode is permanently burned into my brain. In 1990, "Unsolved" covered the triple murder of Joan, Michelle, and Christe Rogers, a  case so messed up that it's still being talked about in true crime forums, long after the capture and execution of serial killer Oba Chandler. True crimedom greatest hits like the Bear Brook killings, the Circleville letter writer and the abduction of Angela Hammond all first found wide audiences on "Unsolved."

Not all of the show's content involved bodies in shallow graves and surprise stabbings, though. It wasn't called "Unsolved Murders," after all. Over the years, the series delivered plenty of UFO sightings, armored truck heists, and families looking to reunite with lost loved ones. But the primary lure for many viewers was the shocking crimes, often involving women and girls, in particular "intelligent" and "friendly" white women and girls.

Yet if there's a single element of "Unsolved Mysteries" that enabled it to get its hooks in generations of impressionable budding true crime fans, it has to be that original theme song. Composed by Michael Boyd and Gary Remal Malkin, it's reminiscent of the equally shudder-inducing themes from "Halloween"and later, "Saw" — a plinky little tune interrupted with thuds of dread. It's bleak, minimalist, and perfect for running screaming through the woods at midnight.  (The theme has been updated multiple times over the years, including for the new Netflix version.)

Today, a slew of podcasts and forums owe a debt to the "Unsolved Mysteries" template, including "The Trail Went Cold" podcast, one of the best of its genre. Speaking to Salon via phone recently, the show's creator Robin Warder said that "Unsolved Mysteries" was "one of my favorite shows growing up." His show is a fresh homage to the series, down to composer Vince Nitro's eerie theme and transition music. "Back in the pre-internet days, the only way you could find any updates to the case was to watch the show," says Warder. "You had to hope that on a later episode, they would give an update to these cases and maybe they would be solved. Unfortunately, a lot of them never have been, even though they're 30 or 40 years old. That rekindled my fascination in going back to these forgotten cases, and seeing if people still had an interest in them even after all this time. It turned out they did, that people still talk about them to this day." And that has everything to do with the way an '80s-era primetime TV show understood how to make the details of those cases unforgettable.

My younger teen daughter, our family's designated fourth generation true crime fan, has already binged the entire new, narrator-free series of "Unsolved Mysteries." For me, though, nothing quite compares to the amygdala-gripping original. Even now, I can watch just a few seconds of it on Amazon or YouTube, and I'm right back to the first time I ever watched the show, young and alone in the dark with just the sound of Robert Stack solemnly intoning, ". . . And no trace of them was ever found."