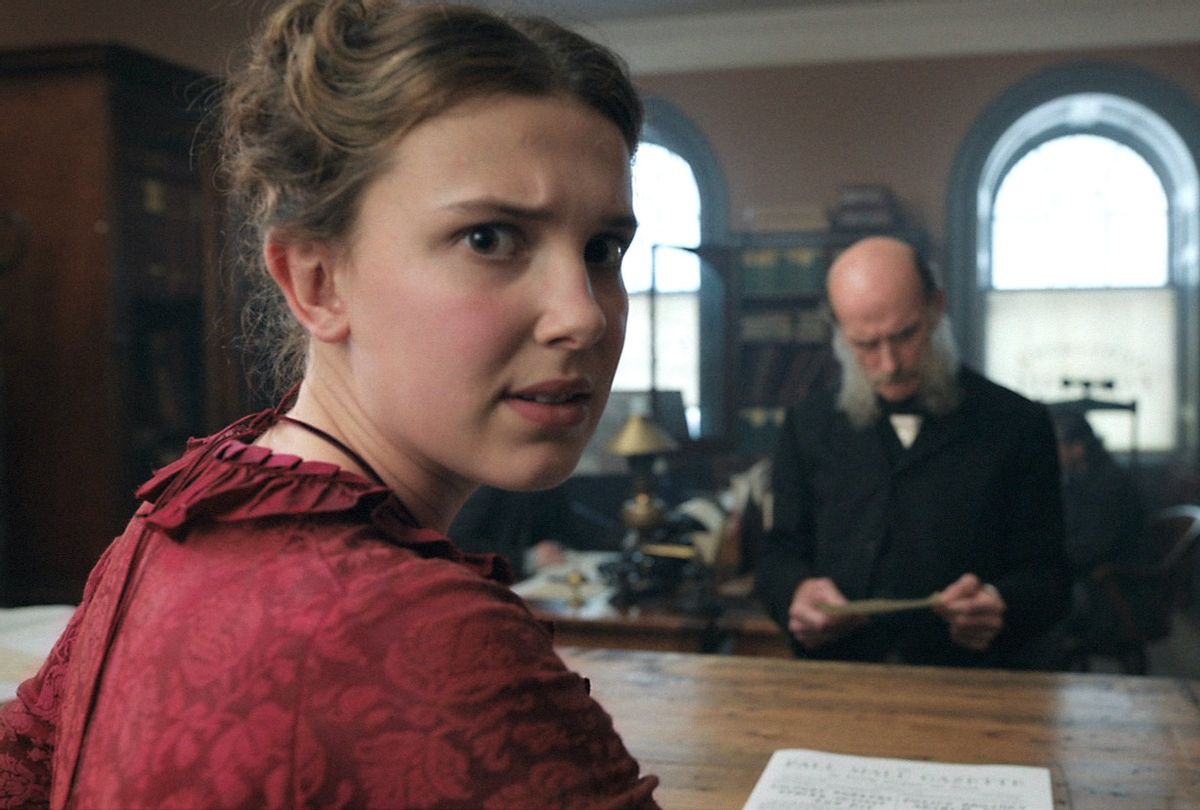 "Enola Holmes" is a breezy and charming twist on the usually darker detective genre inspired by Sir Arthur Conan Doyle's Sherlock Holmes series. "Stranger Things" breakout Millie Bobby Brown, who also serves as a producer, stars as the incredibly capable teenage sister of the observant sleuth in Netflix's feminist update that owes part of its zing to an unexpected source: "Fleabag."

Inspired by the Emmy-winning Amazon series, writer Jack Thorne adapts author Nancy Springer's YA novels by breaking the fourth wall to get inside Enola's head. "Fleabag" director Harry Bradbeer is also on board to hone the effect. As Enola goes about her business, riding her bicycle or getting dressed, she whips her head around to impart insights. It's an effective device that keeps the story in motion while also adding necessary exposition and peeks into her independent mindset.

Make no mistake: Millie Bobby Brown is no Phoebe Waller-Bridge, triple names aside. (But really, who is?) Nevertheless, the chatty role lets Brown show more personality and greater range than she ever did as Eleven on "Stranger Things." Does the acting at times fall into emphatic blinking or mugging? Perhaps, but overall, her ability to carry a film in which she's delivering reams of monologue, not to mention performing light stunt work, is commendable. It's also refreshing to see a 16-year-old play a character her own age, which makes any natural awkwardness forgivable.

Enola is not your stereotypical young Victorian lady. Her mother Eudoria (a vivacious Helena Bonham Carter, perfectly cast) has raised her in harum-scarum fashion. Reading and writing is the sum of her more "ladylike" accomplishments, but Enola also plays chess, conducts laboratory experiments, practices archery, fences, and even knows jiu jitsu. It's an upbringing unencumbered by corsets or society's strict gender expectations.

When her mother goes missing, Enola sets upon her first mystery by hopping on a train to London, where she promptly runs into the film's second mystery: the Viscount Tewksbury, Marquess of Basilwether (Louis Partridge). Although the young lord is a runaway, he soon finds that a man in a brown bowler hat (Burn Gorman) has been hired to kill him. Even though Enola deems Tewksbury a "useless boy," she is drawn to helping the helpless and sets about trying to uncover why he's a target.

Neither mystery is particularly engaging, but they allow Enola to have adventures and show off her unusual skills. Having escaped the supervision of her older brothers – the forbidding Mycroft (Sam Claflin) and famous Sherlock (Henry Cavill, of "The Witcher" fame) – Enola jumps from trains, wrestles in back alleys, and parades around England in a number of disguises. The entire escapade feels more like a Dan Brown-type puzzle quest (with the same unchallenging level of complexity) than a forensic mystery, with the scrapbook-style animations and Daniel Pemberton's string-laden score keeping the pace dynamic and upbeat.

As smart as Enola is, what's more impressive is how Brown has been able to pull off such a film. Not only has she found the perfect vehicle to advance her clever and progressive image, but she's also drawn hefty talent around her. Besides the aforementioned heavyweights, the color-conscious cast also boasts Susan Wokoma ("Crazyhead," "Chewing Gum") as London contact Edith Grayson, Adeel Akhtar as the tenacious Inspector Lestrade and Fiona Shaw as the rather thirsty headmistress Miss Harrison.

While Netflix has been embroiled in controversy over and has lost subscribers for supporting its French-language film "Cuties" — which has been accused of sexualizing children, while the filmmaker declares the opposite — "Enola Holmes" falls comfortably within the streaming service's more subversive and girl-forward offerings that have found crossover appeal. From Mindy Kaling's teen sex romp "Never Have I Ever" to the "quiet revolution" of "The Baby-Sitters Club" to even the musical stylings of "Julie and the Phantoms," Netflix's YA offerings are empowering the next generation of young people.

In "Fleabag," its star declares that "this is a love story," and over the course of the season it becomes clear that the love isn't for the Hot Priest or God, but for her sister and even herself. Likewise, "Enola Holmes" favors filial over romantic love, which aligns with its feminist rallying cry. Enola (which she points out is "alone" spelled backwards) is not just an independent thinker who declares a corset a symbol of oppression, but an independent person who need not rely on anyone — not a useless boy, not a genius brother, not even her brilliant mother. It's an appealing message of freedom for any young adult and one that will likely lead to a franchise of self-sufficient follow-up adventures.