Mike Pence couldn’t defend the White House’s coronavirus response, so he made up alternative facts

Harris called the response the “greatest failure" of any administration. Pence tried to argue swine flu was worse 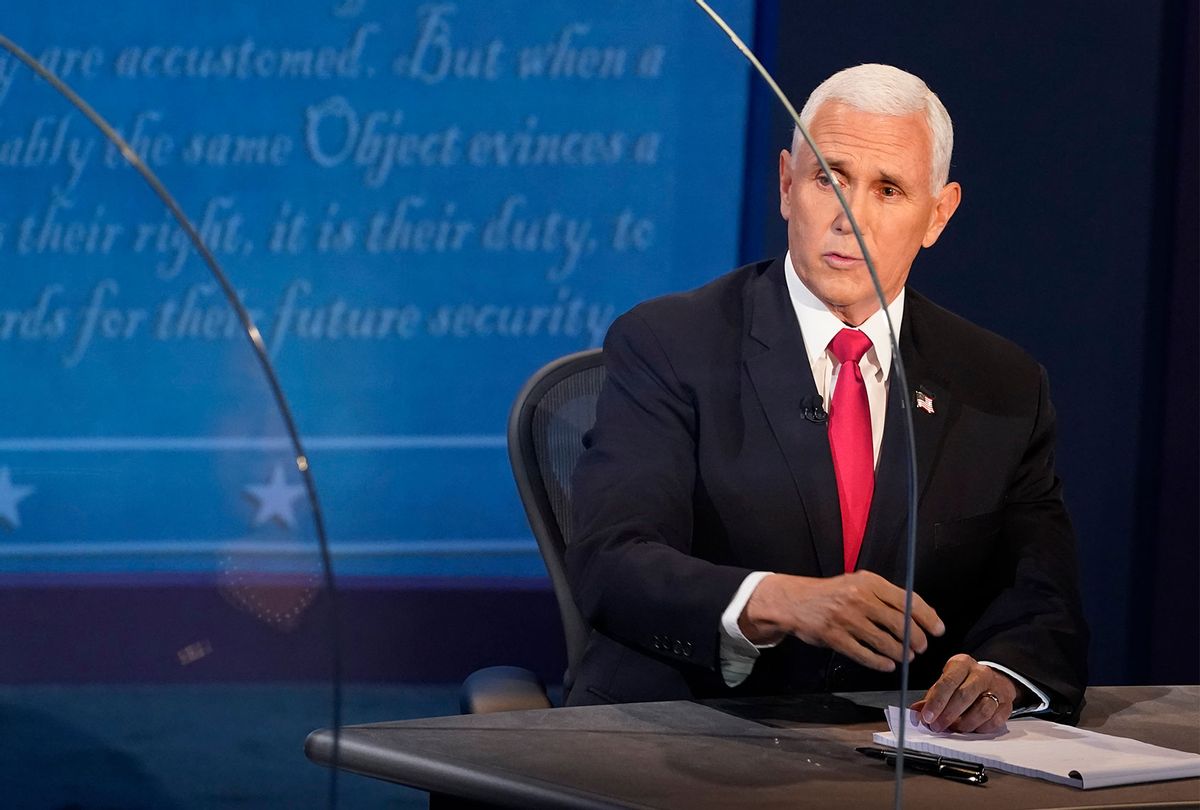 U.S. Vice President Mike Pence debates Democratic vice presidential nominee Sen. Kamala Harris (D-CA) at the University of Utah on October 7, 2020 in Salt Lake City, Utah. This is the only scheduled debate between the two before the general election on November 3. (Morry Gash-Pool/Getty Images)
--

Vice President Mike Pence repeatedly made false claims about the Trump administration's coronavirus response as he dodged, interrupted and obfuscated through the vice presidential debate on Wednesday.

Though the lone vice presidential debate was far more civil than the mind-melting presidential debate last week, it was not much different in substance. Moderator Susan Page, the Washington bureau chief for USA Today, asked Pence and Democratic nominee Kamala Harris about a range of important issues but completely failed to press the candidates to actually respond to her questions. That allowed Pence to repeatedly dodge questions he did not want to answer about Trump's health, racial justice and even abortion.

Pence also refused to say what he would do if Trump rejected a peaceful transition of power, instead echoing the president's false claims about virtually non-existent voter fraud.

The two candidates were divided by plexiglass barriers after President Donald Trump and numerous top aides tested positive for the coronavirus following a possible "super spreader" White House event where Supreme Court nominee Amy Coney Barrett was formally announced. Pence's unusually red eyes prompted speculation about whether he had "COVID pink eye," and he was instantly turned into a meme when a fly sat on his head for a full two minutes during one of the segments.

Harris also dodged questions throughout the night as she was repeatedly interrupted by Pence. CBS News found that Pence interrupted Harris twice as much as she interrupted him. Despite avoiding questions about Democratic presidential nominee Joe Biden's health and whether the ticket supports expanding the Supreme Court, fact-checkers concluded that Harris was far more honest than her Republican opponent, who repeatedly made false and misleading claims about the Trump administration's coronavirus response. Pence heads the chair of the White House Coronavirus Task Force.

Harris called the response to the pandemic the "greatest failure of any presidential administration," repeatedly pointing out the mounting death toll in the U.S. Pence responded by bizarrely claiming that the Obama-Biden response to the H1N1 swine flu in 2009 was a bigger "failure," because that virus infected 60 million people.

But the swine flu was far less dangerous than the coronavirus, which has killed more than 211,000 people in the US. By comparison, fewer than 13,000 Americans died from the swine flu. Because it was less deadly, it did not require a lockdown, which allowed the virus to spread wider than the coronavirus has thus far. The regular flu typically infects more than 35 million people each year and kills far more people than swine flu did in 2009.

Pence also exaggerated the speed at which a vaccine would become available and made misleading claims about the economic recovery while praising Trump for the $4 trillion in coronavirus relief approved by Congress. One day earlier, Trump announced that he would end negotiations to provide additional relief for Americans despite dire warnings from Federal Reserve Chairman Jerome Powell.

Pence also falsely claimed that the apparent White House suprerspreader event was an "outdoor event," even though some parts took place inside the White House.

Pence later falsely claimed that "President Trump and I have a plan to improve health care and to protect pre-existing conditions for all Americans," even though the administration has sought to strike down pre-existing condition protections under Obamacare in the courts and has released no details about a potential alternative plan.

Pence claimed that Trump would "continue listen to the science" on climate change, even though the president has called climate change a Chinese hoax and has worked to undo regulations aimed at cutting greenhouse gases. He falsely claimed that the U.S. has reduced CO2 emissions more than the countries in the Paris Accord, even though most European countries have seen declines twice as large. He additionally falsely claimed that Biden wants to "ban fracking," which Biden and Harris have repeatedly denied.

Harris made a few false and misleading claims as well, claiming that Biden would repeal Trump's tax cuts on "day one." His plan calls for preserving some of the tax cuts and any repeal would require an act of Congress. She also claimed that the manufacturing sector was still in a recession, even though it appears to have ebbed.

With a far calmer demeanor than his running mate, Pence "took a number of flimsy claims out of the Trump playbook, although he often delivered them more deftly," Washington Post's fact-checkers noted.

"I think the whopper of the night was Vice President Pence's claim that they always tell the truth," CNN fact-checker Daniel Dale said. "I mean, it's vague, but this was on the subject of the pandemic . . . It's not a specific policy claim or something, but that, to me, was egregious."

Harris used her time to push back on Pence's claims and argue that Biden did not support fracking nor the Green New Deal.

"Harris used the debate to pursue two goals: to reassure voters that she and Mr. Biden are not as liberal as Republicans claim, including by disavowing policies she embraced during the Democratic primaries, and to carry out a persistent set of attacks against the Trump administration," The New York Times reported.