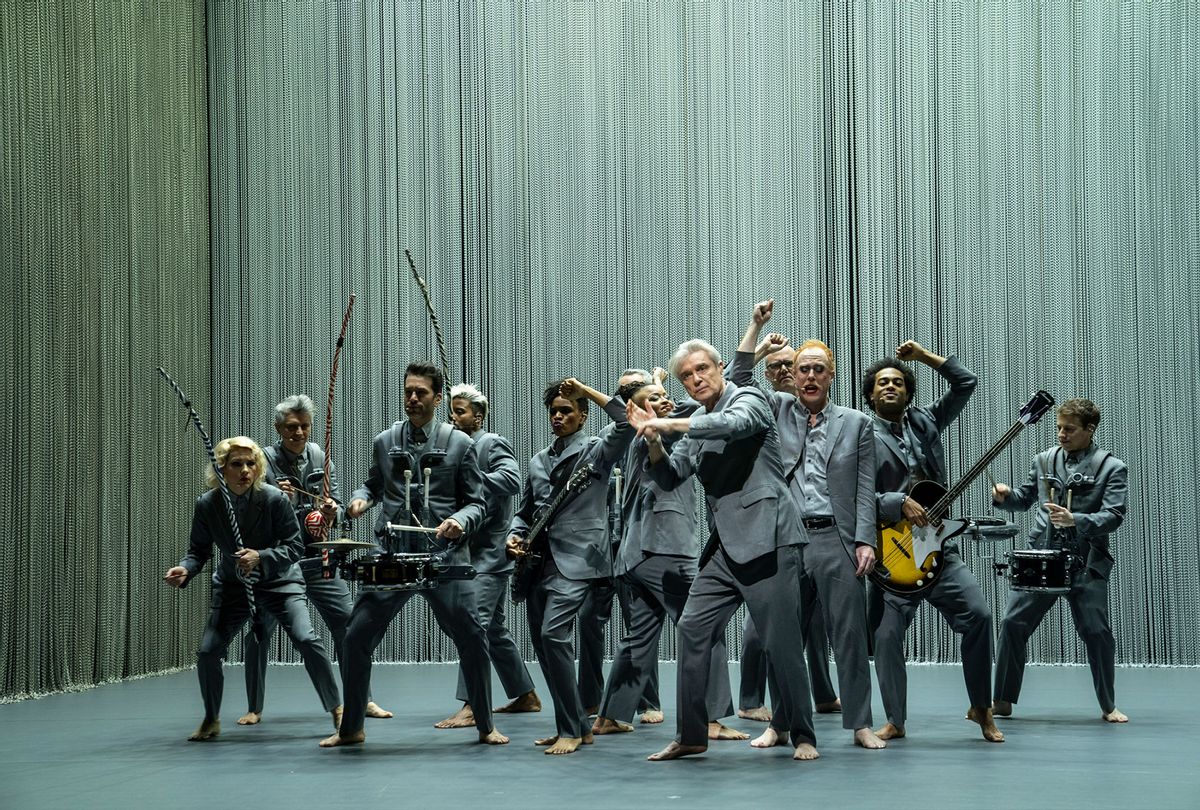 David Byrne is perspicacious — a canny mix of smarts and wonder. His body moves gracefully too, especially when he is gyrating to a relentlessly percussive beat. Spike Lee nicely captures Byrne's mind and body as well as his musical talents in "American Utopia," the lively documentary version of the hit Broadway show that makes its way to HBO for safe viewing, after it was selected as the Opening Night feature at this year's Toronto Film Festival and had a Spotlight presentation at the recent New York Film Festival.

Having seen the 2018 concert version of the show, Lee's documentary does the music and energy of the stage performance justice. The powerhouse sound of the drumming and joyful force of the songs — as well as the few political messages — come through loud and clear. Despite being a film that will mostly be viewed in one's living room, it is impossible to just sit and watch. Lee and Byrne practically encourage folks to dance and sing along. (The audience at the performance recorded for the film is periodically shown to be on their feet, singing and dancing.)

"American Utopia" opens with an overhead shot of Byrne sitting at a table with a model of a brain between his hands. He gets up and holds the brain up and looks quizzically at it, singing "Here," about the sections of the brain, and about confusion and precision. He is, surely, suggesting that folks think critically. After the song, he addresses the audience, talking about baby's brains, and how they potentially have more knowledge than adults who lose connections and reach "a plateau of stupidity." These comments form the show's thread, about developing and defining who we are as people, our connections with others, and even discussions about democracy, immigration, and Black Lives Matter, among other topics.

Byrne's thesis provides the framework for the nearly two dozen songs — several from the Talking Heads' catalog — that make the show as vibrant and stimulating as "Stop Making Sense." When Byrne talks about nonsense poetry, he explains how Dadaists in the 1930s used nonsense to make sense of a world — there was an economic crash, Nazis, and fascism on the rise — that didn't make sense. He performs snippets from Kurt Schwitters' "Sonate in Urlauten" to illustrate how these nonsense poets reminded the world of different, independent minds with ideals that were beyond war and nationality, before launching into a rousing rendition of "I Zimbra," which features lyrics from Hugo Ball's Dadaist poetry and African beats.

As Lee films this performance, he provides close-ups, which can be frustrating for viewers who want to see the full bodies of the dancers and musicians as they move. The music is catchy, but the editing (on this and several other numbers) can be distracting. Lee shoots through the chain curtain that surrounds the stage on three sides a few times, which provides a unique perspective, but these moments also feel necessary only when the curtain is part of the performance. Similarly, a handful of overhead shots work best during the songs that have Busby Berkeley-style choreography ("Every Day Is A Miracle," and "Burning Down the House"). Otherwise they can pull viewers out of the experience.

"American Utopia" emphasizes the benefits of and necessity for diversity and inclusivity. Byrne considers this specifically when he presents "Everybody's Coming to My House." He explains how his version of the song suggests social anxiety, but a version sung by the Detroit School of Arts Vocal Jazz Ensemble celebrates inclusion. (The chorus' track is played during the film's closing credits, to cement this valid point). It is also an opportunity for Byrne, a naturalized citizen, to mention that many of the 11 members of the band on stage with him are immigrants, adding, "And we couldn't do it without them."

A later sequence illustrates that all the music heard on stage is live, with no playback; Byrne shows how the song, "Born Under Punches (The Heat Goes On)," is constructed. The drumming is rhythmic and pulsating and proves why a later shot of Brazilian percussionist Gustavo Di Dalva performing a solo during the song "Blind," is so enthralling. Lee also shrewdly provides a close-up of Byrne playing the opening signature chords of "Burning Down the House."

Lee and Byrne do get political a few times in "American Utopia." (How can they not?) The performers take a knee during "I Should Watch TV," as an image of Colin Kaepernick flashes briefly on screen. Byrne indicates that only 20% of people voted in a recent local election, and 55% voted for president in 2016. "We've got to do better than 20%," he implores. And in the pièce de résistance, a performance of Janelle Monáe's galvanizing protest song, "Hell You Talmbout," Lee cuts away to people holding posters of slain Black men and women, including Treyvon Martin, Sandra Bland, Emmett Till, and too many other victims of racist violence, along with their names on screen.

Thankfully, Lee resists shooting the members of audience in close-up save a quick cut during "Burning Down the House," but he does go off stage for the infectious "Road to Nowhere," when Byrne and his band march along the theater's perimeter for the upbeat finale.

Lee takes viewers backstage briefly after the show, and then out onto the street during the closing credits. This is an inspired decision, but the real power of "American Utopia" is all on the stage.