Trump is defeated. Trumpism is more alive than ever 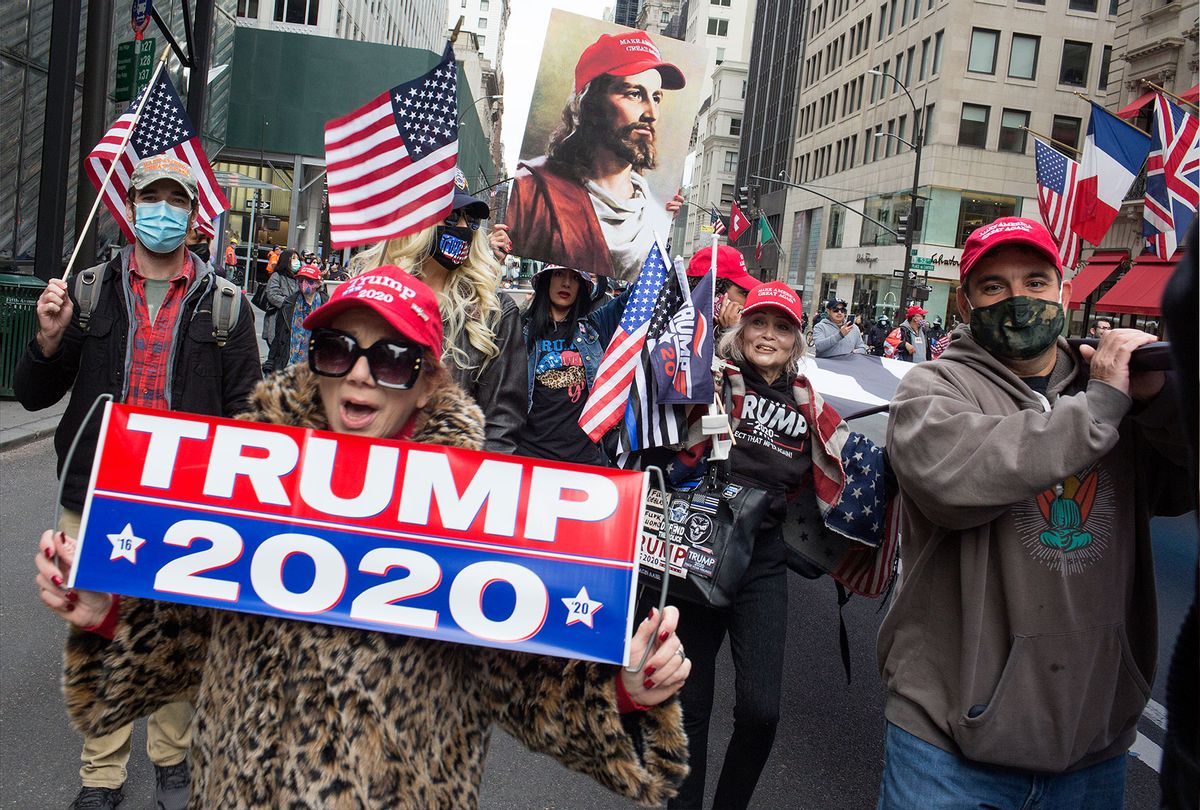 Trump supporters rally in front of Trump Tower and march down 5th Avenue on October 25, 2020 in New York City. As the Presidential election approaches, Trump supporters are becoming more visible, with frequent rallies and caravans. (Andrew Lichtenstein/Corbis via Getty Images)
--

Back in 2016, I attended a debate watch party in San Jose hosted by the Santa Clara County Republican Party. The event was hosted at a Round Table Pizza — the kind of uninspiring corporate pizza chain that was almost too apt for the Bay Area's blandest political demographic. As infiltrators, my girlfriend and I pretended to be fellow Republicans, though we didn't actively try to goad anyone on their views as Sacha Baron Cohen might have. I was just there to write a story about the pro-Trump locals, to try to better understand who exactly these people were who lived among us in the ultra-liberal Bay Area.

At that point in 2016, Trump and his supporters were a poorly understood phenomenon, and Trump still seemed likely to lose the general election. I was not a Hillary Clinton supporter, nor a Democrat — I was far to the left of them — which gave me something of an outsiders' perspective. I considered Clinton a glaringly weak candidate, but still she seemed to have a far more organized operation than an undisciplined outsider like Donald Trump. Even back then, he clearly seemed to suffer from a personality disorder, which I assumed (wrongly) would be an impediment towards victory.

The memory from this evening is seared into my mind — not for anything shocking perpetuated by the Santa Clara County GOP, nor for the mediocre pizza — but rather for the crowd's reaction to the Clinton-Trump debate. It would prove to be a harbinger of politics for years to come.

Throughout the debate, whenever Clinton would be interrupted by Trump, the crowd would laugh and holler. When he belittled her or mocked her, the crowd would hoot. And so on. That crowd of Bay Area Republicans absolutely loved it when Trump would say something cruel to Clinton, or bully her in a performative way.

I'd never seen anything like this. Debate "zingers," in my experience, were supposed to be factual ripostes: one candidate debunks or fact-checks another, to applause from their team. (Sometimes the facts are false or exaggerated, sure; but the format was usually, here's-a-fact, here's-a-counter, and so on.) Clinton spouted political facts and figures at Trump plenty of times that night, but he didn't really do that to her. Instead, he would just mock, belittle and interrupt her. This debate wasn't about normal political repartee to him, not really. It was just about being an asshole.

His behavior was repellent and somewhat shocking to me, but the GOP crowd lapped it up. They hooted and hollered at the set each time Trump mocked her. I didn't have any sympathy for Clinton's formless neoliberal politics, but from a personal perspective the sexist undertones were clear.

I didn't realize it at the time, but this would prove to be a harbinger for the future of politics — and a clue to understand the way that the right has changed in the past four years as the Republicans have become the party of Trump. Now, just over four years almost to that day, Trump's supporters still react to his epic owns — his gloating and belittling and bullying behavior, his sadism towards those who oppose him. His entire presidency was, in his eyes, a battle of us versus them, where everything he did was righteous, and his enemies deserved violence or incarceration. His rallies, the apotheosis of his politics, were both rhetorically meaningless and politically crucial: it was where you could see his politics most clearly, as an arena of mocks, brags, and boasts. It was the political equivalent of a DJ Khaled track — a series of boasts about one's wealth, awesomeness, and superiority over one's haters.

In his day-to-day governing, though, Trump, like his predecessor Republicans, employed a fairly standard right-wing playbook, meaning he essentially did the bidding of one or two right-wing think tanks. He was quite comparable to Bush in that sense. What was astonishing, though, was that he had somewhat more of a mandate to do whatever he pleased (from his base at least) by virtue of his rhetorical signaling. Unlike Bush I or II, or Reagan, or any GOP politician prior, Trump's support was built on the joy that his followers derived from his sadism. And they were willing to let him do or say anything as long as that spectacle would continue. Even when he abandoned them — when, say, he left his ardent supporters to die of hypothermia after a Nebraska rally, necessitating medical treatment for at least thirty — they did not abandon Trump. There are many stories of Trump supporters whose family members died of coronavirus, yet who still possess admiration for Trump, though he enabled the virus' uncontrolled spread.

Perhaps Trumpism, and its specific articulation of an us-versus-them mentality, is not unprecedented in American politics. But  rhetoric is only half of what Trumpism is. The other half is just standard deregulation, privatization, and upward wealth redistribution — the kinds of neoliberal policies that move wealth upwards to the top 1% of society. Trump seems to have stumbled into this formula, the realization that sadism is the specific key towards continuing this right-wing, semi-authoritarian neoliberal agenda.

Hence, aside from a single measly $1,200 check, Trump delivered few observable material improvements to the lives of his supporters, who are largely not of the super-rich variety who benefited from, say, his tax reform bill. Rather, many of his policies have hurt them. His supporters love him, paradoxically, because we live in an epoch in which so many of us have completely given up on politics: we no longer believe politics is capable of materially improving our lives. This applies to both Democrats and Republicans. And if you believe politics can't actually do anything for you, it makes sense perhaps that it would become an arena in which you get emotional satisfaction from absorbing the president's epic owns, with no material effect on your own life.

That means Trumpism is not merely Trump's creation. It is also the creation of the Democrats, who have become such a thoroughly neoliberal party, whose actual politics are steeped in the tea of corporate donors and billionaires, that their hands are tied when it comes to any kind of real reform that might dig into the pocketbooks of the latter. The Democrats don't employ the same kind of sadistic rhetoric, but a huge number of online liberals have become similarly obsessed with getting in epic owns against their political enemies. (Just scroll through the replies on any Trump tweet.)

Thus, the Democratic Party has cynically settled to push social issues that will have no effect on corporate bottom lines: issues that are undoubtedly incredibly important to civil rights, but not to any great degree that would challenge the status quo or redirect wealth. To the contrary — the party actively fights to repel any change to the socioeconomic status quo. Joe Biden's infamous remarks to that room of rich donors, where he assured them "nothing would fundamentally change" if he were president, are key to understanding the Democratic shift; as is Kamala Harris' facile student debt relief plan, which would forgive debt for almost no one. They can't offer much to the lives of anyone, and the weak material reforms they do offer are performative: they are widely praised by the professional-managerial class liberals, and difficult to access by the working class.

Obamacare was key in this regard: a thoroughly capitalistic, neoliberal "solution" to healthcare that relied on the for-profit private healthcare industry to "solve" a crisis that continues to spiral out of control. The idea for Obamacare quite literally came from the right-wing Heritage Foundation; it was prototyped by Republican Mitt Romney when he was Massachusetts governor.

Professional middle-class liberals often defend the Affordable Care Act (ACA) as a worthy reform, on par with Social Security or other New Deal social programs. If it really were as accessible and successful as those, however, the rural red parts of this country would have lit up blue out of gratitude for seeing such a real material improvement in their lives, and become an important part of a new coalition. Yet Medicare for All it is not. I've had an ACA plan before, back in the early 2010s; and while I was glad to have any form of health care, the $70 copays were difficult to manage and discouraged me from seeing a doctor at all. Because of bureaucratic confusion, I had to pay $2,000 in taxes at the end of the year, in a year in which I made less than $32,000. I regret not just merely paying out of pocket, and I regret that the Democratic Party was too wed to the inefficient mores of capitalist accumulation to challenge the healthcare industry in a material way. I fled the party as a result, and have not voted for a Democrat for president since 2008 — opting for the third-party, more lefty candidates instead. The national Democratic Party offers me nothing, and will get nothing from me in return.

The Republicans, on the other hand, do just the opposite. They offer their supporters less than nothing — a live of more immiseration — with the promise that their supporters will learn who their enemies are, and then see their enemies get "owned." Epic bullying and a public display of cruelty that makes them feel good, like they're part of some kind of "in" crowd.

These lessons of Trumpism — be obstinate, gloating and sadistic, and your followers will become zealots, freeing you to keep redistributing wealth upwards — are already visible in the newest crop of Republican candidates. Republican Madison Cawthorn, the 25-year-old incoming House Representative for North Carolina's 11th congressional district, celebrated his victory with this Twitter message: "Cry more, lib." A common pro-Trump banner seen around the country during the election read "TRUMP: F**K YOUR FEELINGS."

Amid the empty posturing of the Democrats and the sadistic posturing of the Trumpist GOP, a huge swath of this country is flailing. 8 million additional Americans have fallen below the poverty line since July 2020. Student debt is approaching $2 trillion. Medical debt is being aggressively collected despite the pandemic.

The only liberal antidote to Trumpism is actually doing something material to aid those who've fallen for it — giving them something in their lives to noticeably improve their social welfare, redistributing wealth downwards. Franklin Roosevelt absorbed this lesson, as evidenced by the New Deal Coalition; it is unclear if a Biden administration is capable of doing the same. Indeed, if Biden's administration doesn't do anything to materially improve the lives of millions of working voters, Trumpism is apt to get stronger, not weaker, in the next four years.