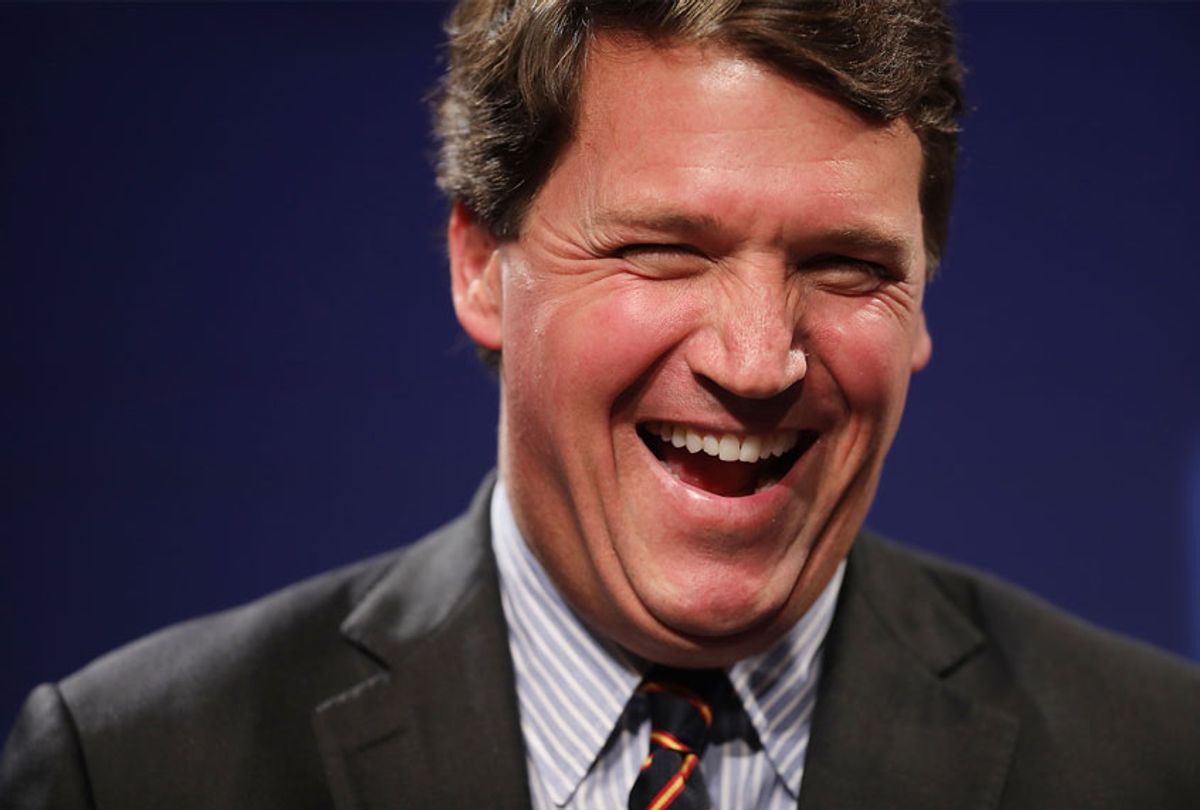 Fox News personality Tucker Swanson McNear Carlson paused on his Monday night program to dispel rumors that he planned to leave the network, assuring his audience that his show was only "getting bigger" and network brass wanted "more of it — not less."

"Over the weekend, we got a lot of calls asking if we're leaving Fox News," Carlson claimed, before teasing an apparent extension of his show's "reporting and analysis."

"Ironically, at that very moment, we were working on a project to expand the amount of reporting and analysis we do in this hour across other parts of the company," the Fox News host said.

"This show isn't going anywhere," Carlson continued. "It's getting bigger. The people who run Fox News want more of it — not less — and we're grateful for that."

The apparent expansion comes after the network announced a round of layoffs amid what a spokesperson characterized to Salon at the time as a "corporate realignment." Reached for comment on Carlson's alleged new project, a Fox News spokesperson referred Salon back to the host's remarks.

The brief segment came in response to a Facebook screenshot of a post from a fake Tucker Carlson account on Parler, a right-wing alternative social media platform. It kicked off a rumor that Carlson, who is the conservative network's biggest draw, had announced he was taking his show to Newsmax, a competing network which has positioned itself to the right of Fox.

"The American people spoke their truth. Fox News is over," the fake account said in the screenshot. "I'll be starting at NewsMax next month."

In a caption, the Facebook user — a QAnon follower — who posted the screenshot wrote: "Good News. TUCKER CARLSON IS MOVING TO NEWS MAX [sic]. WHERE THE TRUTH PREVAILS."

Facebook flagged the post as misinformation, but did not remove it. (The Daily Caller, a news site co-founded by Carlson, partners with Facebook's fact-checking team.)

Over the last year, President Donald Trump, displeased with Fox's polling and news segments critical of his administration, has mounted a war of words against the network often credited for his political ascent. Trump has repeatedly called Fox "unwatchable," and the president allegedly screamed at network founder Rupert Murdoch over "unfair" pre-election coverage.

"Fox News weekend afternoons is the worst!" the president tweeted in July. "Getting into @CNN and MSDNC territory. Watch @OANN & @newsmax instead. Much better!"

Trump, however, reserves his ire for the "news side" of Fox. The president frequently heaps praise on primetime entertainers, including Laura Ingraham and his "pillow talk" pal Sean Hannity, who continue to amplify the president's message nightly in spite of his election loss.

Carlson, who in June turned in the highest ratings for any cable news show ever despite advertiser boycotts over "race-baiting" comments, maintains the approval of Trump and his base, though he has occasionally criticized the administration.

But Carlson has also been rumored to be considering a run for office himself, possibly as the presidential heir to Trumpism. Days after his record ratings were published, Carlson called on viewers to reject the mainstream Republican Party, which feeds them "partisan junk food designed to make them feel full even as they waste away."

"Who cares how many Benghazi hearings we have? We're supposed to care — why should we? How did Peter Strzok's text messages become more important than saving American jobs from foreign nationals who are taking them? It is lunacy," the Fox News host said. "We fall for it every time."

"And to the extent this show has participated in it, we apologize with deepest sincerity," he added.