Inspired by Richard Sax, this flourless cake has a basin-like center filled with a whipped cream cheese topping 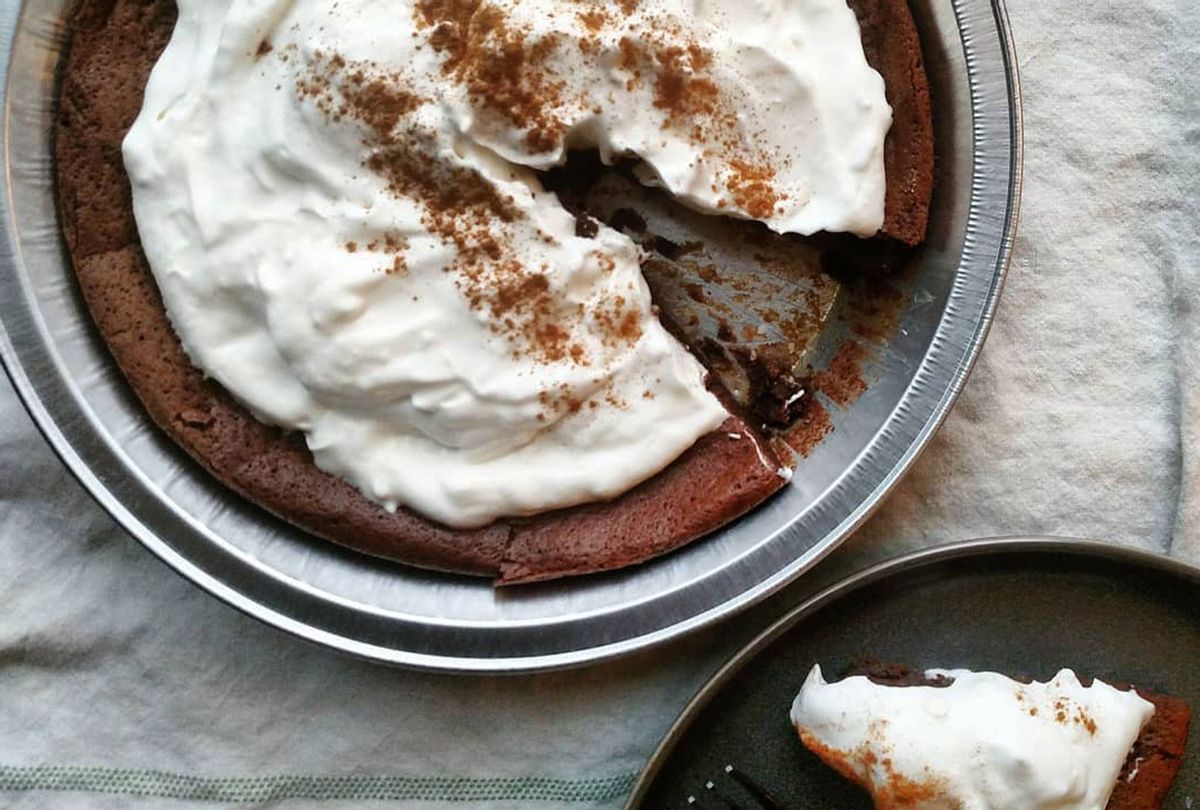 In preparation for the holidays, I've been on a mission for the past several weeks to develop a dessert with the texture of cookbook author Richard Sax's famous chocolate cloud cake but the flavor of a good hunk of gingerbread.

Before his death in 1995, Sax was a prolific food writer who co-wrote a monthly column for Bon Appetit and also contributed regularly to Harper's Bazaar, Gourmet, Food & Wine and Eating Well. His cloud cake is a flourless masterpiece, made by whipping egg whites with sugar into a stiff meringue and folding in melted chocolate and cocoa powder.

The cake emerges from the oven with a craggy crust and a fallen, basin-like center that gets filled with cool whipped cream. For me, it's a casual dinner party go-to, because it's simple, decadent, naturally gluten-free (and that pile of whipped cream can hide a multitude of sins).

I kept the structure of the cake the same for this recipe but adapted the flavor profile to register as a little more seasonal. We've got ingredients that pack a lot of depth — molasses and dark chocolate pair for a rich base, which is warmed with cinnamon, nutmeg, and of course, ginger. The whipped cream also gets a bit of an update through the addition of cream cheese, which yields a fluffy, slightly tangy topping.

1. Separate the whites and yolks of four eggs into two large mixing bowls.

2. Using an electric mixer, whip the egg whites while steadily adding the white sugar until stiff peaks form. Set aside.

3. In a small saucepan, combine the dark chocolate, butter and vegetable oil. Melt over low heat.

4. Add the melted chocolate to the bowl of egg yolks. Then, add the molasses, ginger, cinnamon nutmeg, vanilla extract, the two additional eggs and brown sugar. Mix until thoroughly combined.

7. Preheat your oven to 350 degrees, and pour the batter into a 9-inch diameter springform pan or a greased cake pan lined with parchment paper.

8. Bake until the top begins to puff and crack, and the cake starts to pull away from the edge of the pan (35 to 45 minutes). Remove from the oven, and place on a wire cooling rack. The cake will fall in the center and continue to crack as it cools.

9. While the cake is cooling, make the whipped topping. In a large bowl, combine the chilled heavy cream, cream cheese and powdered sugar. Using an electric mixer, beat until the mixture forms soft peaks.

10. Carefully remove the cooled cake from the springform pan or from the parchment lined cake pan (run a knife around the edges if it's a little stuck).

11. Fold the whipped topping into the center of the cake. Sprinkle with ground cinnamon for decoration.