In "Pieces of a Woman," Vanessa Kirby survives the worst in a heartbreaking, measured performance 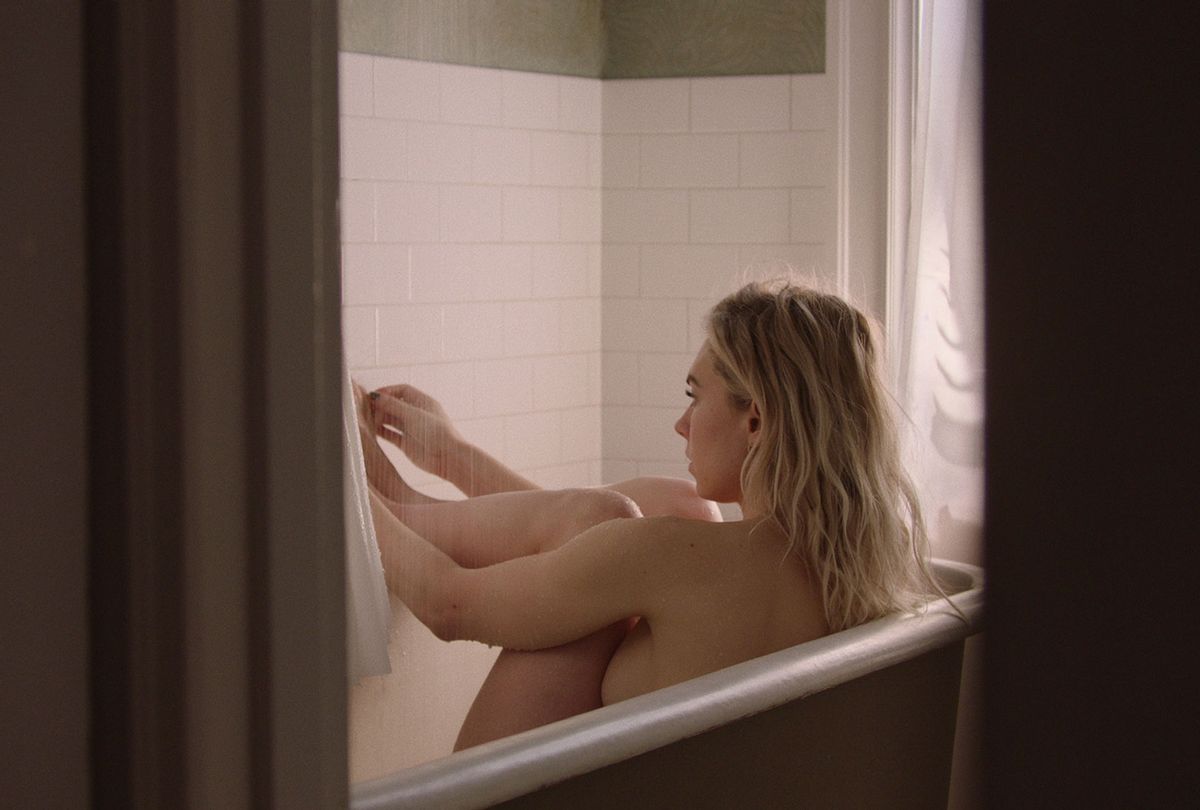 Vanessa Kirby in "Pieces of a Woman" (Netflix)
--

Six minutes into the affecting melodrama, "Pieces of a Woman," director Kornél Mundruczó ("White God") plunges viewer into a bravura set piece — a 24-minute, single-take sequence, shot with a handheld camera. Martha (Vanessa Kirby of "The Crown") is experiencing contractions and then her water breaks. Her partner, Sean (Shia LaBeouf), is attentive to her needs and tries to comfort her as Eva (Molly Parker, "Deadwood"), a substitute midwife arrives. The baby experiences distress during labor, and although she is born and held by her mother for a moment, the infant soon turns blue and dies, leaving everyone bereft.

Mundruczó, working from a script by Kata Wéber, makes this devastating sequence as unnerving for viewers as it is for Martha and Sean. Kirby, who won the Best Actress prize at the Venice Film Festival last year, conveys Martha's pain and discomfort palpably. She feels nausea and burps periodically. She is scared, and her expressions, body language, speech, and cries communicate her anxiety. But it is her grief and sorrow that lasts. "Pieces of a Woman" spends its next 90 minutes showing episodes — the film is divided into chapters that occur weeks apart — that depict Martha's mental and emotional aftermath following this heartbreaking loss.

The film is a difficult sit, but Martha's experiences are revealing. She is triggered seeing baby clothes or young children. She starts to lactate. Her conversations with Sean are awkward, full of uneasy and uncomfortable silences. She is upset by an error on her child's headstone and bothered by an encounter with a compassionate friend of her mother's approaching her in a supermarket. It is hard not to sympathize with Martha during these scenes, and Mundruczó's restraint here, along with Kirby's internal performance, prevents things from getting too mawkish or sentimental.

Martha actually exhibits a kind of grace and even clarity in these moments. She may not want pity, or even revenge; she is just processing what she feels. When Martha makes a decision about donating her baby to medical research, it goes against her domineering mother Elizabeth's (Ellen Burstyn, "Requiem for a Dream") wishes, causing friction. Likewise, it is Elizabeth, not Martha, who hires Martha's cousin, Suzanne (Sarah Snook), a lawyer, to sue Eva, who has administered other homebirths that have ended tragically.

As "Pieces of a Woman" depicts episodes from Martha's life, Mundruczó strives for a cumulative emotional impact. Unfortunately, her epiphany, which arrives during a big speech in a courtroom near the film's end, feels manipulative. The film works best as a portrait of a woman processing loss. The efforts to address issues of closure and justice feel misguided — because that is not what Martha wants.

There are other challenging moments. The worst is when Sean forces Martha to have sex with him in part to perhaps recapture the intimacy they once shared. His efforts, however, come across as selfish, not well-meaning. Their rough sex certainly magnifies her fragile condition and perhaps explains why he has an affair. His falling off the wagon, after years of sobriety, however realistic, also feels simplistic.

Shia LaBeouf plays Sean as the self-described "boor" his character is. Sean's self-destructive behavior is an honest response to absorbing the impact of his shared loss. But his storming out after an inconclusive autopsy report is about as soulful as Sean gets. A speech LaBeouf gives about resonance — he is explaining why an old bridge collapsed — falls flat.

In contrast, Elizabeth gives an impassioned speech about shame and hope stemming from her experiences as a child during the Holocaust. Even if this Oscar-baiting moment feels reductive, it gets at the heart of the film — are we strong enough to survive the worst? But it does not help Martha to be told she needs to persevere (or get therapy); the interesting thing is how she finds her will to survive. Martha's coping strategy is to germinate seeds, an apt metaphor given that she described her child as smelling like an apple.

The film is obvious with its symbols, from dead plants in the couple's apartment illustrating grief, to a framed print of the ultrasound that Sean gives Martha just before she delivers (a painful reminder of what might have been), to a closing scene that feels both overly precious and completely unnecessary.

Mundruczó creates a mesmerizing early sequence, but the rest of his film never quite matches that intensity. Perhaps it does not have to, because the power of "Pieces of a Woman" lies in Kirby's performance. The actress is equally commanding reacting silently to children playing on a public bus, or during her emotional testimony in the freighted courtroom scenes. Kirby never comes off as mannered, nor do her outbursts feel overdone. She mostly exudes a thoughtfulness, which is particularly apparent when she is looking at old photos of her and Sean, or an image of her baby daughter months after her passing.

"Pieces of a Woman" is demanding film, told in fragments. It contains some worthwhile moments for those who can sift through the shards.

"Pieces of a Woman" is currently streaming on Netflix.