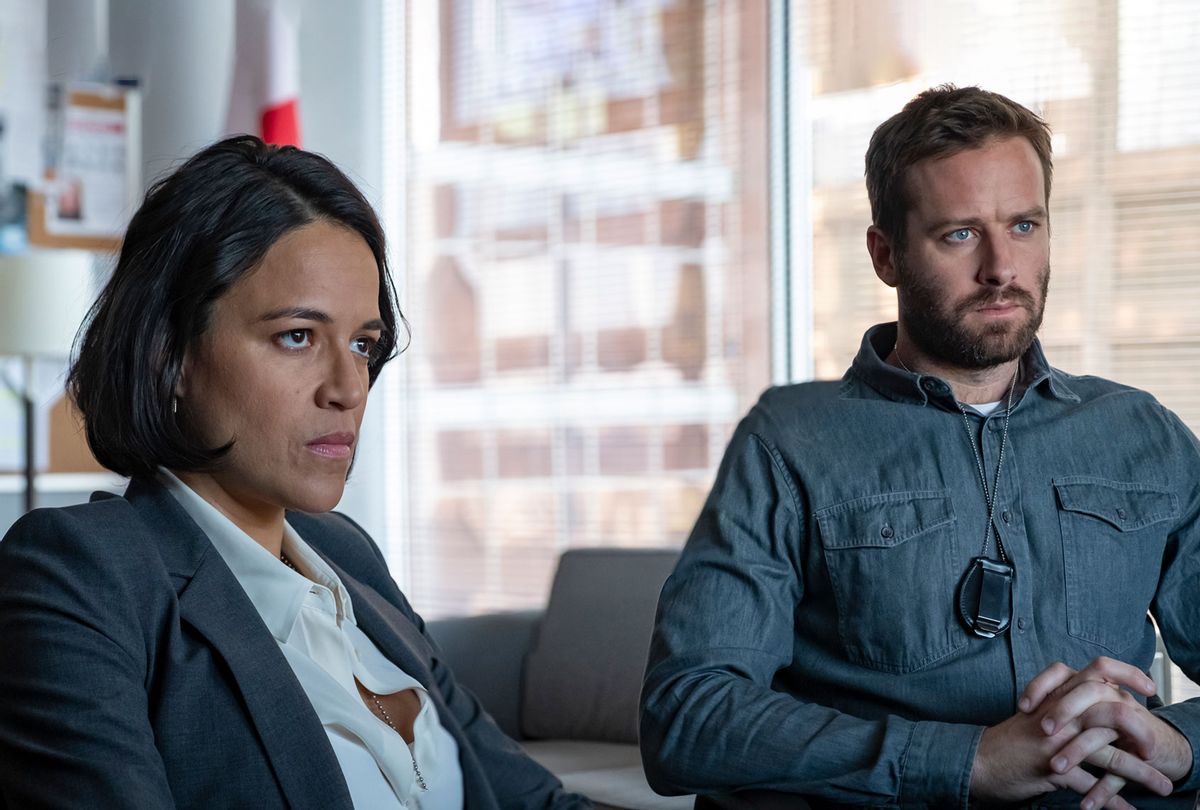 "Crisis" is a woefully bad, inspired-by-true-events drama about the opioid epidemic.

Nicholas Jarecki ("Arbitrage") who wrote, directed, produced, and also appears in a supporting role, does none of these things well. Especially all of them.

His film follows three storylines — each involving an ethical conflict — but viewers will laugh inappropriately, hurt themselves suspending disbelief, and see every plot twist coming. It is hard to imagine a more unexciting crime film, or a drama so determinedly unsubtle. Arguably, the sole moment of originality has a character put a magazine into a gun the wrong way at first and then, realizing their mistake, fixes it.

"Crisis" may have worked if it had been reformatted as a miniseries, like the original 1989 BBC version of "Traffik" (remade as a feature film by Steven Soderbergh). But instead Jarecki shoehorns too much — and little of it good — into three plotlines that stretch across 118 interminable minutes.

Jake Kelly (Armie Hammer) is a federal agent who is trying to entrap Mother (Guy Nadon) who runs an opioid pill mill and drug trafficking operation between the U.S. and Canada. He is also trying to snare a pair of Armenian power gangsters he has been working with while undercover. His commitment to this risky mission may stem from the sad fact that his sister Emmie (Lily-Rose Depp) is an addict.

Jake's story dovetails with Claire Reimann (Evangeline Lilly), an addict in recovery whose world spirals out of control when her teenage son David (Billy Bryk) dies of an overdose. Or does he? The cops fail to notice the bruise on his skull or the fact that his lungs are clear. Claire takes it upon herself to investigate how David was involved in a drug smuggling operation. But as mad as she is — and she is mad as hell — Claire does not even take the police to task for their sloppy forensics.

The third story, which is tangentially related, concerns Dr. Tyrone Brower (Gary Oldman, who executive produced), a tenured university professor whose lab results indicate that a new (fictional) opioid product called Klaralon, meant to reduce dependence actually results in death. (Cages of stiff lab mice prove this). As the product is about to go on the market, Brower risks losing funding and jeopardizing the university's reputation by blowing the whistle.

Each story, which features personal and political issues, is important, but none of them are well told. Jarecki clumsily lumbers from one meh scene to the next, never generating anything other than tedium. Jake glowers in his meetings with Mother when a list of informants that might botch his plan, is introduced. Episodes of Claire packing heat and tracking down the chain of individuals who set up her dead son strain credibility. And Brower's meeting with FDA agent Ben Walker (Kid Cudi) take place on a park bench in broad daylight. "Crisis" always goes for the cliché.

The characters face moral issues but fail to express the difficulty of their predicaments. Jake's frustration having to track down Emmie after she releases herself from rehab seem to be more about her interrupting his mission than actual concerns about her addiction. Likewise, Claire's revenge scheme may be completely facile, but worse is the Big Dramatic Moment where Claire opens a bottle of painkillers and . . . decides not to take them.

But the film's worst offender is the Brower plotline, which involves him being involved in a sexual harassment claim, and tangling with his Dean (Greg Kinnear, sleazy yet again) about money and ethics, while also trying to assure his much younger pregnant wife Madira (Indira Varma) that everything is going to be OK. This storyline has Brower standing up for the Capital-T Truth(!), and its preachiness is both painful and unmoving.

"Crisis" is rarely convincing, which is one of its many problems. The film is glossy where it should be gritty. Scenes in drug dens look set-decorated, not authentic. The film's cynical tone is hollow, and meaningless. An anti-drug PSA is more persuasive. Jake, Claire, and Brower are all meant to be heroes fighting against the evil opioid crisis, but it is difficult to invest in the three single-minded characters. They are noble robots, not complex or flawed human beings.

The ensemble cast cannot elevate the subpar material. Armie Hammer — in what may be one of his last screen roles if his career implodes — basically scowls through the entire film. Jarecki must have encouraged his intensity-on-overdrive acting, because it is all he does. He is as stiff as the aforementioned dead lab mice. Evangeline Lilly is simply miscast. Her speech in a Narcotics Anonymous meeting is as risible as her confrontation with a supermarket checkout clerk regarding her missing son's whereabouts. She never earns the empathy her character should engender. When Claire holds that handful of opioids, one might want her to ingest them rather than throw them out.

Gary Oldman tries to inject Brower with some brio, but he cannot save this turkey. When Brower rejects an offer by Big Pharma, personified by Bill Simmons (Luke Evans in oily mode) and Meg Holmes (Veronica Ferres), viewers are expected to cheer, not yawn. The enervating film makes it hard to muster up the energy to do either. Moreover, one can't help but admire the irony of the Oscar-winner — who brilliantly played Sid Vicious decades ago — making an anti-drug film. Was "Crisis" some form of penance?

Jarecki's film is a complete misfire from start to finish. It is meant to be hard-hitting, but it is completely soft-headed.

"Crisis" opens in select theaters Feb. 26 and is available on digital and on demand March 5.