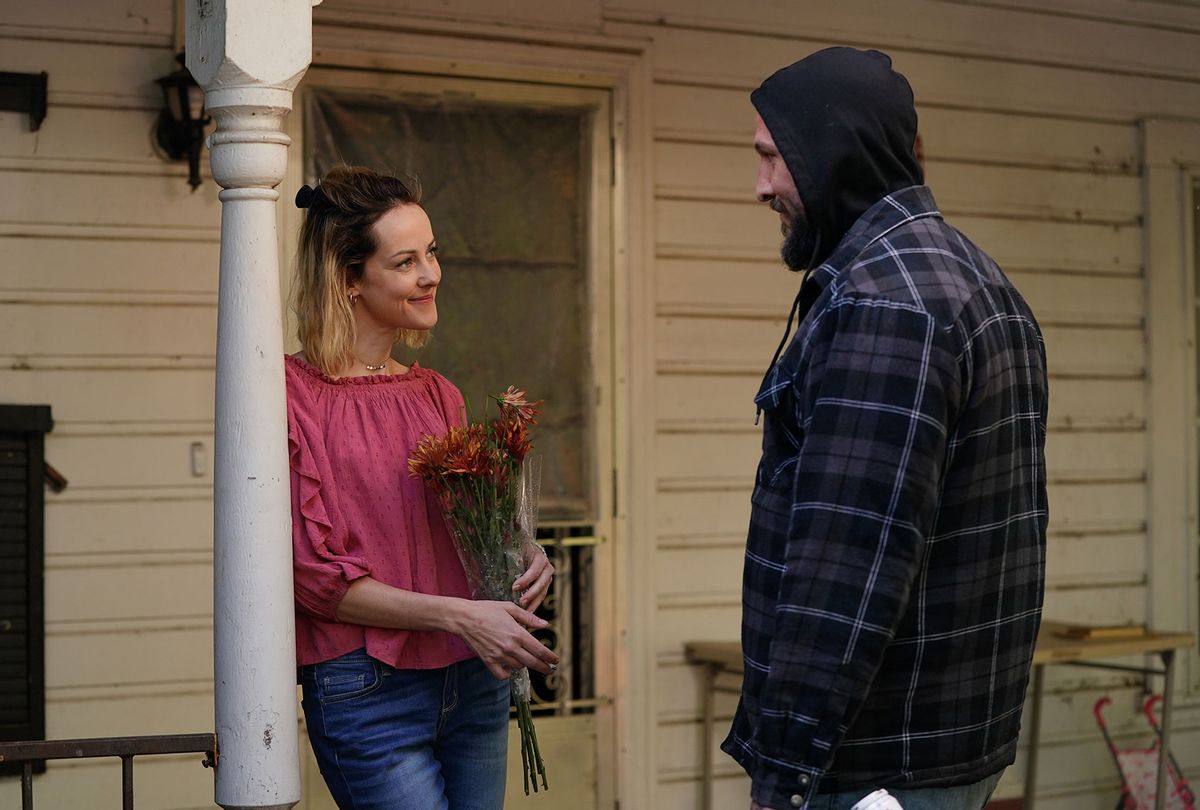 Jena Malone and Pablo Schreiber give soulful performances in "Lorelei," writer/director Sabrina Doyle's gritty indie drama about second chances that screened at the Miami Film Festival this week and will get a release later this summer. Malone plays Dolores, a working-class mother of three whose life changes when her teenage boyfriend, Wayland (Schreiber) returns after 15 years in jail. Dolores takes Wayland in, and he helps her raise her kids: Dodger (Chancellor Perry), a biracial teenager; Periwinkle Blue (Amelia Borgerding), who is turning 12; and Denim Blue (Parker Pascoe-Sheppard), who likes wearing Peri's dresses.

For Schreiber, his character is all about trying to stay out of trouble and find something good in Wayland's life. His efforts to adjust, however, are not without risks and temptations for fast money and other women that are counterbalanced by having to manage a trio of kids — none of whom are his. Schreiber is especially poignant as a hulking man who is really a scared and wounded teen.

Likewise, Malone's character, Dolores is very different from her recent screen roles, as a racist Southern woman in "Antebellum" or Angie Bowie in "Stardust," But "Lorelei" offers Malone the opportunity to go deep into her character. A once promising swimmer, Dolores is now cleaning seedy motel rooms, giving her daughter used clothing for her birthday, and paying for a dinner out with gift cards. While she cares for Wayland, and tries to recapture the love they had, she also feels trapped.

Malone and Schreiber spoke with Salon via Zoom about their flinty roles in "Lorelei."

Dolores is protective, she is needy, she is stuck, she is selfish, she has pride, but she also has self-esteem issues. What decisions did you make about her character?

Jena Malone: I'd taken a year and a half off getting lost in motherhood, and it felt precarious. I was motivated but insecure. Inspired but totally tired. Had a lot to give but felt like I had an empty tank. There were a lot of dichotomies that existed in me at that time. I thought, I'm going to dive into this intense performance as a mother and I am discombobulated as a mother.

Finding who Dolores was, I looked to my own moms, who raised me in a very untraditional way. They worked three jobs and I don't remember them ever cooking us dinner. Our food came out of boxes. I thought fish came out of a box. When I heard sushi existed, when I was 10 or 11, I didn't understand how that was possible. I felt there was such a need to explore what it's like to be a lower-income, single working mother who is up against the entire world and doesn't have the opportunities for emotional growth, or mental well-being, or being able to rise out of their situation whether through money or inspiration.

Wayland is reentering life after a 15-year time out. How did you calibrate his experiences and adapt to a world that he barely knew?

Pablo Schreiber: He's emotionally stunted, and he comes out having been inside to the same world not knowing how to function. He's an adult in a world where he used to be a teenager, and all of the life experiences he bumps into are beyond his experience and bordering on overwhelming. We start to see that in his interactions, such as engaging in family life and this new way of being with someone he knew before. It's way too much. Dolores holds his feet to the fire. What you see is that he's a guy with a really good heart who wants to do better but doesn't know how. That's imminently relatable. We're all digging in the dark and flailing our way through life.

Ultimately, he's human and we see the choices he's faced with, and nothing is easy for him. The work he gets is not glamorous, and he's put into a position where he's making a pittance. Now he has three kids. We build up a scenario and a life where there are hard choices to make. And yes, he has a former life he can slip into, and other women tempting him, and that he wrestles with these circumstances, makes him human. But you see him trying his hardest to do the right thing. You never see him taking the easy route.

Malone: Pablo anchored the film in such an interesting, de-commodification of masculinity. It was the story of the anti-masculine man. His toxicity and his divinity are allowed equal space to be talked about, and it's not through lens of judgment. He's working through it. I don't see a lot of films about men that give the opportunity for growth, and the mess of it without judgment.

What can you say about Wayland's sensitive and self-destructive qualities?

Schreiber: There are a lot of "don't do its" in this movie. [Laughs] The flaws of being human. He is relatable because he is not perfect. He screws up and you care about him. I knew I wanted him to be a man of great weight, and girth and size, so the performance could be small and gentle. Wayland sized up the room and was very guarded. You get that from being in jail. You assess the situation carefully before you go into it, and there's a tendency to think before you speak and make sure that what you are going to say is what you want to say. That, combined with often not knowing what he should do or say in situations, paved the way for how the character felt and behaved.

The film shows that their lives are messy, Dolores' house is messy. Folks would call them "white trash" but that is condescending. What can you say about their situation?

Malone: "White trash" has always been stigmatized but romanticized — it's a stereotype, right, a very boxed-in thing, but there are really subtle beauties there that people are not invited into see because the stereotype can be off-putting and confining. Dolores has to makes choices because of her financial state, but it doesn't mean she's not going to try to create the smallest semblance of a life. And then there is the horrible crumble of it and living in the wreck of life. Her life is a complete wreck. And so are a lot of people's lives. It doesn't matter about your income status. The wreck of your life is what you allow, and she has allowed so much deterioration. But she is not fully swallowed by it. You can still want to light a candle and dance in your living room and try to lift yourself out of it, and I love that she was always looking for her lift, regardless of the wreck.

Wayland and Dolores made some, let's say, interesting choices in their lives. "It wasn't supposed to be like this." The film poignantly asks, "What should have been?" What observations do you have about the chasm between the characters' dreams and their reality?

Malone: We want to support single mothers, but as soon as a single mother puts themselves first, it's such a demonizing occurrence. It's not always finding support by mastering baking. Sometimes it's doing something extremely selfish — that breaking point that could put your family in danger or completely rescue them. Most single parents are navigating that threshold constantly. How much can I gamble to make this better? But the gamble is a moderately selfish pursuit.

Schreiber: In a lot of ways the film is about people missing each other. The way their relationship builds, Wayland is very unsure at the beginning of it and she's eager to make it happen, but they are on different trajectories. I love the fable aspect of this and that it comes from the opera and fable "Lorelei," and this nymph that lures men to their death. There's a constant tension — Is she the nymph luring him or is she his savior? It could be either and it could be both. I responded to the magical realism elements and poetry in it, and my biggest causes bringing it to the screen [as an executive producer] was saving the poetry of it. This is a fable about growth, and how people can change. Sabrina wanted to tell that story through this guy who has hit rock bottom and has many judgments and preconceived notions within him and how does a person like, who holds so fast to their beliefs can fundamentally change.