Season 11 was no "Gentefied," but watching the characters grapple with their changing South Side was poignant 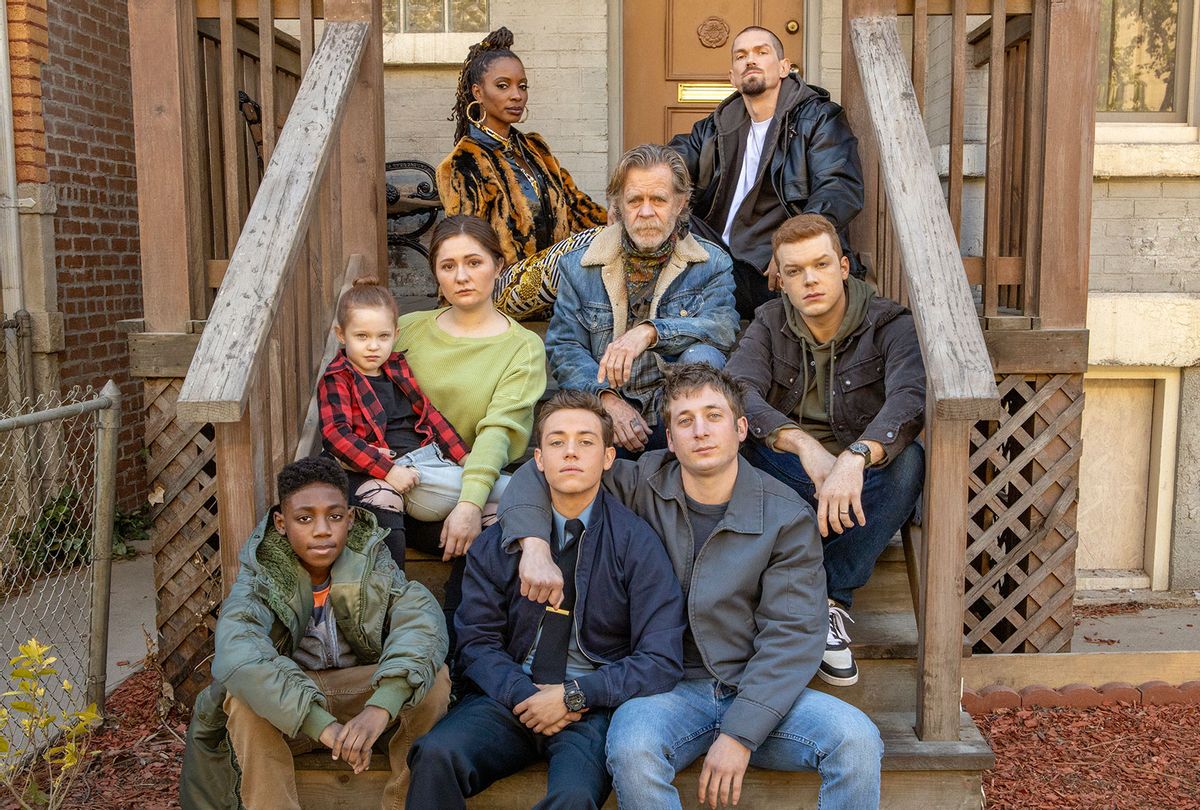 The following contains spoilers from the final season – and episode – of "Shameless."

This final season of Showtime's "Shameless" was far from perfect. The American remake of the British series of the same name — which follows the Gallagher family, led by alcoholic patriarch Frank (William H. Macy), as they attempt to get by and maybe ahead in Chicago's South Side — has always been littered with discarded plot points, unresolved conflict and uneven character development since it first premiered in 2011.

The finale, which limped to a conclusion on Sunday and centers on the death of Frank from COVID-19, was simply a heightened example of this; but I watched the series for over a decade just the same because, at its core, it's a show that's about giving the middle finger to America's stratified class system.

As film critic Matt Zoller Seitz wrote for Salon when it first premiered, the show isn't about showing viewers that we can lift ourselves up by our bootstraps whenever we want, rather "it's about feeling a great weight on your shoulders every day but resolving to carry it around anyhow, drinking, screwing and cracking wise to take the edge off."

While certain realities of living in poverty have been introduced and abandoned, or are just completely left out of the script — there are entire Reddit threads dedicated to questioning why Fiona (Emmy Rossum) spent so much time making lunches for the kids when they would have definitely qualified for free public school lunches — gentrification has been an ever-present tension in the lives of Gallaghers, though never more so than in this last season.

The eleventh season of "Shameless" was at its best when the characters were tasked with unfurling their place in a neighborhood that was rapidly changing around them — and what it would mean for them if they, in fact, contributed to or personally benefited from that change.

We're immediately thrust into contemplating gentrification in the first episode as a young filmmaker requests to shadow Frank for a documentary project he's doing about the changing demographics in the South Side. This is an obvious, though pretty tidy, vehicle for some monologuing from Frank, which is reminiscent of the opening of the series itself.

"Yeah, this is our Chicago," Frank says at one point. "It's disappearing fast, but before it's gone, we're going to enjoy every f**king minute of it."

That dichotomy between observing loss and deriving enjoyment from — or in spite of — change also serves as a neat way to categorize some of the main players and their motivations this season. Take Mickey and Ian (Noel Fisher and Cameron Monaghan), for instance.

The newlyweds quickly become disillusioned with sharing a house with the rest of the Gallagher clan, especially once Mickey's racist and violently homophobic family moves next door, and after scoring a high-paying gig doing security and armed transport for a now-legal, trendy dispensary, the couple contemplates securing a place of their own.

They end up settling on an upscale apartment in the city's West Side, a community that is facing its own real-life reckoning with gentrification; playwright Guadalís Del Carmen took a deep-dive into this in their beautiful, aptly-named 2018 play "Not for Sale". Ian adores the amenities in the complex — the pool, the gym, the nearby Whole Foods where he can "spend the afternoon looking at the organic produce."

As viewers, we're happy for him. He's had a really, really rough life and it's a relief to see him have the opportunity to "make it out," kind of like Fiona did when she jetted off to "somewhere warm" with $100,000 in hand at the end of Season 10 after a real estate investor agrees to buy her out of the apartment building she'd purchased (Fiona, much to fans' disappointment, did not return for a guest appearance or even cameo in the final season).

Ian, like Fiona, personally benefited from their community's changing dynamics and used them as a way to get ahead. Mickey, however, has a tougher time coping. He misses being on the South Side and bristles at some of the "perks" that Ian enjoys, like the craft beer shop down the block from their new place. He tries to fall asleep in their new apartment, but it's too quiet so he puts on a YouTube video of car crashes and police sirens as a kind of demented white noise machine.

The writing surrounding the conflict is often pretty sitcom-y, like when Mickey starts gathering up pool chairs to use in the apartment after becoming enraged that the pricey rent doesn't include furniture, but the tension establishes some of the nuanced feelings associated with newfound upward mobility.

Kev and Veronica (Steve Howey and Shanola Hampton) are also debating when it comes to how or if they're going to continue living in the South Side. Through V's eyes, we see how the gentrification all across the city continues to push out longtime Black residents, including her mother, who moves to Louisville, Ky. She and Kev are faced with a choice: Do they stay and try to build back stake in the community for new and existing residents of color? Or do they move on to what could be an easier (and definitely cheaper) life in Louisville with V's relatives?

When a developer offers them over $200,000 for their home next to the Gallagher's house, the choice seems clear. When a real-estate agent wants to turn their beloved bar, The Alibi, into a tanning salon, they're less certain.

The price tag on Kev and V's home also catalyzes conflict between Lip (Jeremy Allen White) and Debbie. After fixing up a run-down rental in the South Side — much to the apparent displeasure of his neighbors who worry that the improvements will attract gentrifiers — Lip, Tammy and their son are unceremoniously booted from the property after the building's owner realizes he could make more money by just selling the house with Lip's renovations.

Lip determines that he could do the same updates to the Gallagher family home and sell, and the siblings could split the funds equally to start new, better lives (there's a big plot hole in that the season never explains who actually owns the house and how that would impact the paperwork on day of sale, but that's just another continuity gripe). Put simply, he wants a come-up like Fiona.

But Debbie becomes obsessed with the idea that the family will be broken up by the sale of the home and digs her heels in episode after episode, while 11-year-old Liam (Christian Isaiah), the youngest Gallagher, is just worried about who he's going to live with if the sale goes through, especially as Frank's health continues to falter after he's diagnosed with alcoholic dementia.

In the end, Lip attempts to play hardball with the developer who bought Kev and V's house and it fails; he's offered $250,000 and pushes for $275,000. The developer ends up just buying the house down the block, leaving him with nothing. The question of whether or not he'll be able to sell to another interested buyer — though for significantly less money — remains unanswered in the final episode.

The character who receives the most closure is, perhaps unsurprisingly, Frank. His death in the final minutes of the show was heavily teased throughout the season, like when he commissioned an oversized "Do Not Resuscitate" tattoo on his chest. He made the point again and again that he had lived his life his way — and wouldn't have wanted it any other way. In his mind, he was one of the last of the old guard who kept the South Side true to its origins; his passing is a not-so-subtle metaphor that things really have shifted, both for the family and the community.

In some ways the final season of "Shameless" bore some similarities to the Netflix series, "Gentefied," which was one of my absolute favorite shows of 2020. It's about a Mexican-American family who owns a taco joint, Mama Fina's in Los Angeles' gentrifying Boyle Heights neighborhood.

As I wrote last year, it's a "beautiful show about people trying to play a game in which they don't make the rules." Faced with the double threat of eviction and opportunistic real-estate developers hanging over their heads, the Moraleses finally come around to the idea that whatever needs to be done to save Mama Fina's, even if it's not immediately comfortable, should be done.

That means at least somewhat acquiescing to the tastes of the changing neighborhood (i.e. introducing a "taco of the week" and Etsy-sourced chalkboard menus). "Gentefied" hits the question of who should benefit from gentrification harder and more poignantly than "Shameless" does.

The title of the series comes from a word coined by Guillermo Uribe, who owns a bar in the real Boyle Heights. "Gente" is the Spanish word for "people" and, as Uribe told Los Angeles Magazine in 2014, he believed that "if gentrification is happening, it might as well be from people who care about the existing culture."

It's a loaded proposition, one that leads the characters of "Gentefied" to contemplate when they jockey for much-needed hip customers if "welcoming outsiders en masse with open arms like this is pushing people out of their homes and into the tents around every corner."

"Shameless" doesn't have nearly that amount of nuance and, from a narrative perspective, the finale of "Shameless" is frustrating because it leaves so many of the key characters in flux, but if you pull back, the finale is actually a pretty apt metaphor for communities in transition periods. It raises the question of who actually benefits from amenities and development, even if it doesn't answer those questions completely, and there's poignance in that.