Between the pandemic and gun violence, the death toll from America's minority rule problem is staggering 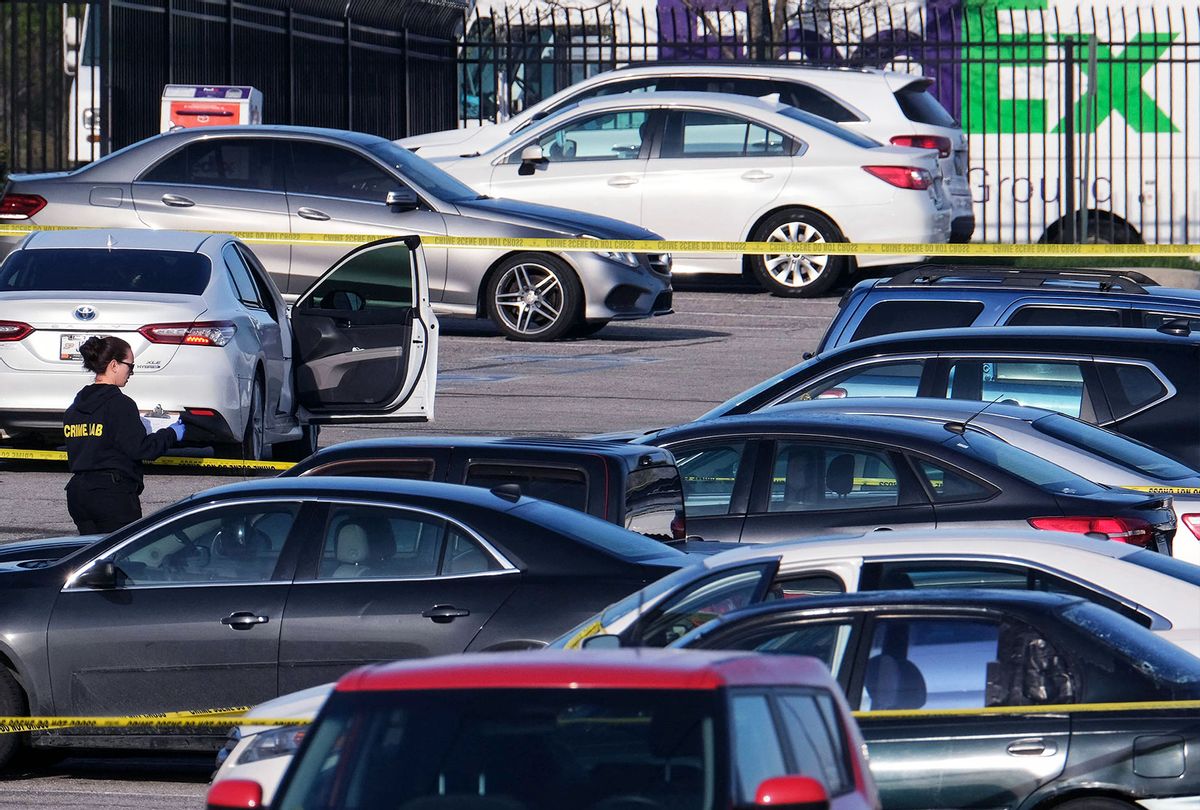 A crime lab technician (L) works in the parking lot of the site of a mass shooting at a FedEx facility in Indianapolis, Indiana on April 16, 2021. - A gunman has killed at least eight people at the facility before turning the gun on himself in the latest in a string of mass shootings in the country, authorities said. The incident came a week after President Joe Biden branded US gun violence an "epidemic" and an "international embarrassment" as he waded into the tense debate over gun control, a powerful political issue in the US. (JEFF DEAN/AFP via Getty Images)
--

Friday morning, Americans awoke yet again to another round of headlines about a senseless mass shooting, this time with 8 people dead at a FedEx facility in Indianapolis. After a year of an unimaginable amount of death from COVID-19, it appears Americans are returning to our regular pre-pandemic cycle of trauma, which is the random mass murder of people interspersed between an unending stream of street violence stemming from a country steeped in guns. We had barely started to embrace hope of the pandemic ending when these high profile shootings began again: Atlanta. Boulder. Southern California. South Carolina. Now Indianapolis.

The frustrating thing is the majority of Americans know what needs to be done to curtail these murders, and they support doing it.

Polling from Morning Consult released just the day before the Indianapolis shooting shows that 2 out of 3 Americans want stricter gun control. This follows polling showing that 84% of Americans want background checks for gun buyers. Arguments in favor of gun control are winning the public debate. About 40,000 Americans die a year from gun violence. Voters want Congress to do something about it.

But Republicans barely bother to offer more than perfunctory arguments against gun control anymore. They know they don't need to, because no matter what happens at the ballot box, no matter how many Americans reject them and their views, they are the ones who will control the country, especially on matters such as gun control. Adam Jentleson, the former deputy chief of staff to Senator Harry Reid, the Nevada Democrat who served as Senate Majority Leader for some time while Barack Obama was president, has dubbed it the "minority rule doom loop." As Jentleson describes it, the "doom loop" is one "by which predominantly white conservatives gain more and more power, even as they represent fewer Americans."

The doom loop consists of four interlocking components. Candidates who represent white conservatives—Republicans, in our ideologically sorted era—begin every election cycle buoyed by a sluice of voter suppression and gerrymandering (what I call electoral welfare), which makes it easier for them to win. Then antidemocratic features of the American system that have always existed but never benefited one party over the other in any systematic way help those same candidates take control of institutions such as the White House and the Senate, despite winning fewer votes and representing fewer people than their opponents. Once in control of these institutions, these newly elected officials use them to entrench their power beyond the reach of voters. If they are eventually voted out of power, they retain a veto over the agenda of the majority, which they use to block change and feed the conservative case that the government is "broken." This hastens their return to power—along the very path they greased with voter suppression.

Right now, we're in stage three, where Democrats were able to marshal enough forces to overcome the significant structural barriers to majority rule to win technical control of the government. But Democratic helplessness to pass gun control legislation is a cold reminder that Republicans, despite being walloped at the ballot box, retain most of the power in this country.

Yes, President Joe Biden was able to get an important coronavirus relief package passed through Congress on a party-line vote. But on the vast majority of legislative priorities for Democrats — gun control, climate change, voting rights, health care — Republicans have the final word, due to the filibuster. That word is consistently "nope," with a side dose of "f*ck you" to the majority of Americans who voted against the GOP. And with Republican-controlled state legislatures rapidly introducing a bunch of bills to disenfranchise voters further, it may very well be tha we're entering a new era when Democrats can't even technically win elections, despite having the majority support among Americans.

And it's even worse than that passage from Jentleson indicates, because Republicans also have captured the courts through sleazy means, holding judicial seats open during Barack Obama's presidency, only to rapidly fill them when Donald Trump got elected. As Ian Millhiser of Vox argued in a recent Salon interview, the result is Republicans can go around the legislative process entirely to force their agenda on Americans who keep haplessly voting against them.

Nearly 20% of people who died in the worldwide COVID-19 pandemic have been Americans, even though we have less than 4% of the world's population. Hundreds of thousands of Americans would be alive today, but for Donald Trump's reckless mismanagement. What adds insult to injury is that Americans didn't even choose Trump as their president. Hillary Clinton won nearly 3 million more votes and, in a truly democratic nation, would have been president when the pandemic hit. Even her fiercest critics on the left had to admit that hundreds of thousands more people would be with us today if the competent woman — the person who got the most votes — had been allowed to actually have her win, instead of letting the electoral college install a sociopathic buffoon.

Truthfully, the death toll we're looking at from our continued insistence on letting Republicans win even when they lose is going to be unfathomable, because we can add "lack of health care" and "climate change" to the growing pile of deadly problems that Americans keep voting to fix, to no avail. The situation is only getting worse, as Republicans dig deeper into the idea they have an absolute right to rule, no matter what the voters say about it.

There is still, for the moment anyway, a solution.

Democrats could strip the minority party of their nearly-absolute veto power but abolishing — or at least reforming — the filibuster, a pointless anachornism in the Senate that was mainly used in the past to defend white supremacy. When they were in power, Republicans didn't think twice about nuking the filibuster when it got in the way of their main priority, which was controlling the Supreme Court. Without Republicans being able to stop any bill before it even got to debate on the Senate floor, Democrats could strengthen gun control, improve health care, fight climate change, and, perhaps most importantly, bar state legislatures from passing laws to deny Americans the legal right to vote.

Unfortunately, this common sense move is being blocked by two Democratic senators who are weighed down by an ignorance that is only surpassed by the size of their egos: Kyrsten Sinema of Arizona and Joe Manchin of West Virginia. Both of these senators keep foolishly insisting that filibuster is somehow a tool encouraging bipartisan engagement and debate, even though the reality is that it's being used by Republicans to unilaterally end all Senate debate before it even happens. Whatever the real motivations of these two — likely an outdated belief that "doing nothing" is the safest possible political position — their actions are stunningly immoral. People keep dying pointlessly in this country. They have the power to do something about it, but they flat out refuse to use that power.

It's farcical, in an existentialist-novel sort of way. American voters have been cast in the role of Sisyphus, where we keep pushing that rock labeled "Democratic victory" up that ever steeper hill, only to see all the hard work and sacrifice tumble to the ground right on the precipice of actually getting anything done. Our once great nation is being brought to its knees because a couple of scatterbrained Democratic senators can't bring themselves to admit they are playing handmaiden to Republican plots to destroy the tattered remains of our democracy. Americans keep voting and voting and voting for the right not to be senselessly killed. That we can't even get that shows that this thing we call a "democracy" is anything but.