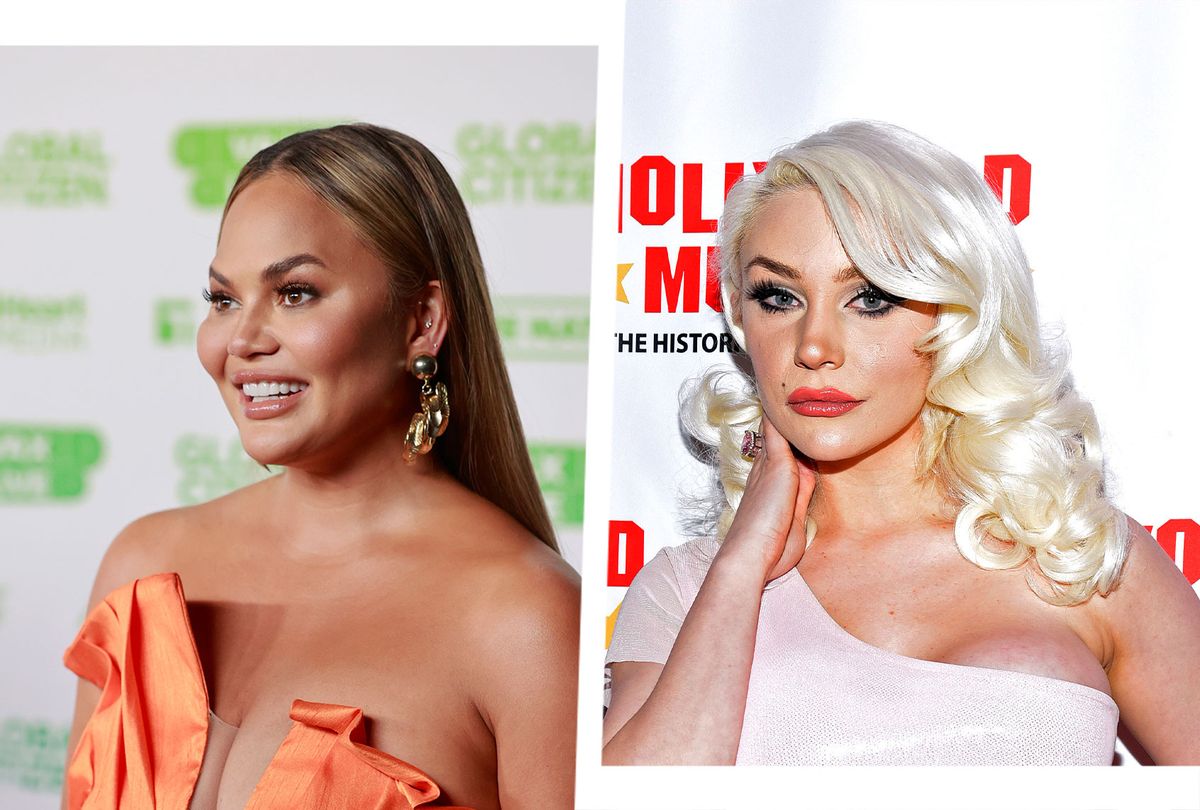 In 2011, Courtney Stodden made headlines when they married 50-year-old "Green Mile" actor Doug Hutchison. Stodden was 16 at the time — young enough that their mother, Krista, had to sign a document giving the couple permission to wed — but was overwhelmingly treated by the tabloid media as a punchline, instead of a child who had been groomed.

Stodden, whom many likened to a young Anna Nicole Smith, was simultaneously derided and oversexualized for their appearance and mannerisms (including on a particularly disgusting episode of Dr. Drew Pinskey's show "Lifechangers'' during which he performed an ultrasound on their breasts to confirm they were real).

In a recent interview with The Daily Beast, Stodden alleges that some celebrities, including model and television host Chrissy Teigen, followed suit.

Stodden, who recently identified themself as non-binary, alleged that Teigen both publicly and privately encouraged them to kill themselves.

"[Chrissy] wouldn't just publicly tweet about wanting me to take 'a dirt nap' but would privately DM me and tell me to kill myself," Stodden said. "Things like, 'I can't wait for you to die.'"

Following the publication of Stodden's interview on May 10, Twitter users uncovered several other since-deleted public tweets allegedly sent by Teigen to the then-minor. They include messages like, "@courtneystodden i hate you," "go. to sleep. forever," and, "My Friday fantasy: you. dirt nap. mmmmmm baby."

Teigen did not address any of the specific tweets or their content, but on Wednesday afternoon, she did offer an apology via Twitter.

"Not a lot of people are lucky enough to be held accountable for all their past bulls**t in front of the entire world," Teigen wrote. "I'm mortified and sad at who I used to be. I was an insecure, attention seeking troll. I am ashamed and completely embarrassed at my behavior but that . . . is nothing compared to how I made Courtney feel."

She continued: "I have tried to connect with Courtney privately but since I publicly fueled all this, I want to also publicly apologize. I'm so sorry, Courtney. I hope you can heal now knowing how deeply sorry I am."

However, saying sorry came a little late for some people observing. During the time between Stoddard's interview and Teigen's apology, a number of conservatives — led by "Daily Wire" commentator Candace Owens — used the uncovering of Teigen's past tweets as an opportunity to petition for former president Donald Trump's return to Twitter.

It's a weird turn, but not a totally unexpected one. Teigen publicly relished opportunities to get under the former president's skin. She and her husband, singer John Legend, were outspoken critics of Trump  who, at one point, memorably tweeted about her being Legend's "filthy mouthed wife."

After being name-checked by Trump, Teigen eventually found herself as the target of Trump-supporting QAnon conspiracy theorists who baselessly accused her and Legend of being pedophiles.

It makes sense, in turn, that conservatives would leap at the opportunity to put her down — even if potentially deservedly — in order to build Trump up.

"Donald Trump was censored off the internet for writing nothing even remotely violent," Owens tweeted on Tuesday. "Chrissy Teigen told a then-16-year-old to commit suicide, and that she couldn't wait for her to die and is allowed to keep all of her accounts. Disgusting."

It's a disingenuous sentiment. Trump frequently used Twitter as a testing ground for racist and xenophobic statements, as well as a platform to baselessly decry the outcome of the 2020 election. When combined with a Jan. 6 speech in which he told attendees of a joint session of Congress formalizing Joe Biden's electoral victory,  "You will never take back our country with weakness," Trump's public messaging — both online and in-person — directly incited the Capitol insurrection.

Twitter permanently banned Trump on Jan. 8 after Trump tweeted, "The 75,000,000 great American Patriots who voted for me, AMERICA FIRST, and MAKE AMERICA GREAT AGAIN, will have a GIANT VOICE long into the future. They will not be disrespected or treated unfairly in any way, shape or form!!!" and then "To all of those who have asked, I will not be going to the Inauguration on January 20th."

In the face of plans for future armed attacks at the Capitol, Twitter officials stated, "Our determination is that the two Tweets above are likely to inspire others to replicate the violent acts that took place on January 6, 2021, and that there are multiple indicators that they are being received and understood as encouragement to do so."

Teigen herself took a short, though heavily publicized, break from Twitter in mid-March. She cited "abuse and hate" on the platform as the reasoning (and Qanon members claimed her brief departure as a victory).

Stodden responded to news of Teigen's social media break at the time, tweeting, "What a shame @chrissyteigen is leaving Twitter. it's too 'negative' for herrrrrr #chrissyteigen #bully."