How Tig Notaro became a badass action star at age 50

The comedian spoke to Salon about her roles in Netflix's "Army of the Dead," the comedy "Together Together" & more 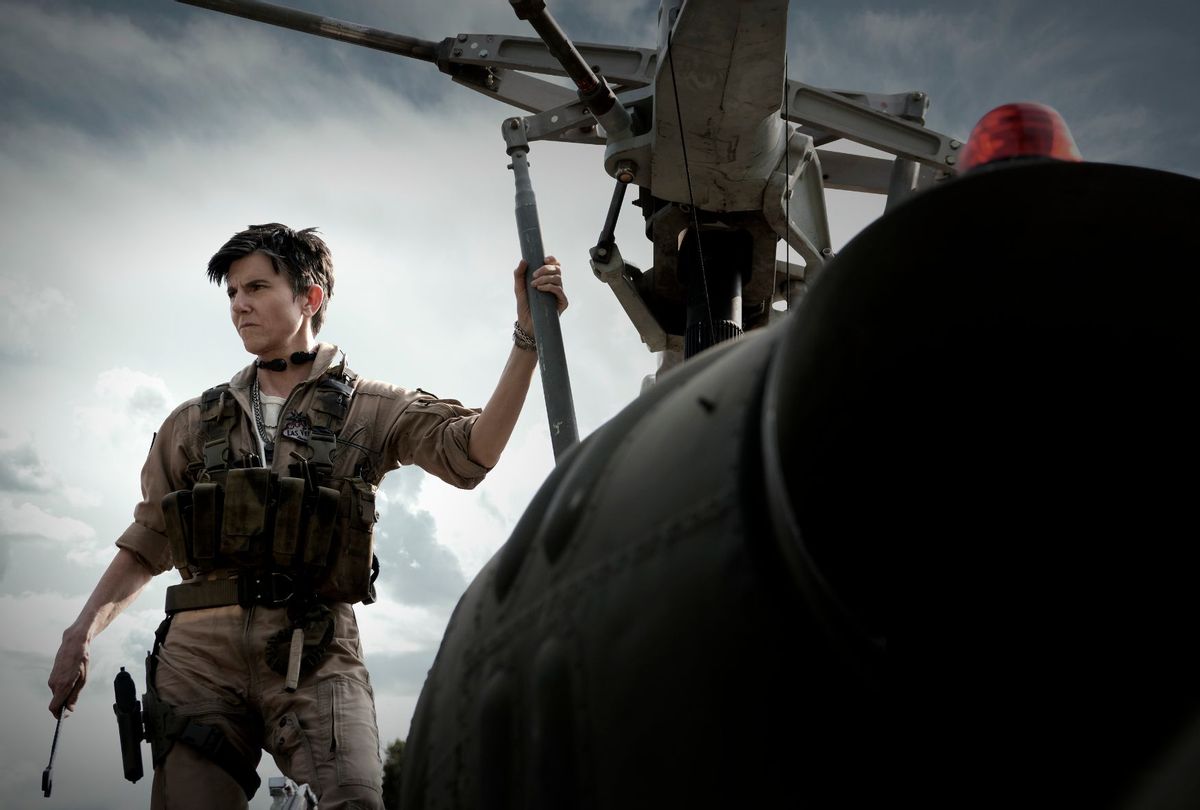 At age 50, stand-up comedian Tig Notaro has become a bonafide action star. But playing a brash helicopter pilot in Zack Snyder's zombie heist flick "Army of the Dead" has come with some unexpected talking points that goes beyond the usual discussion of acting and stunt work.

Perhaps unfairly, Notaro has also had to weigh in on sexual misconduct – and it's not the first time she's worked on a project associated with a man implicated in #MeToo. In 2017, Louis C.K. had been removed as executive producer of Notaro's Amazon series "One Mississippi" after several accusers came forward. This time, Notaro is replacing Chris D'Elia, who originally filmed the role in "Army of the Dead." Last year he was accused of sexual harassment, among other misconduct with underage girls, and Snyder made the decision to remove his character and digitally replace him with Notaro.

"If somebody is harassing or assaulting somebody, I feel like there should be consequences for that," Notaro told Salon. Her statement is firm but also creates an awkward pause in the interview. D'Elia isn't present to answer for himself, and Notaro's worthy attention for this role comes at the cost of his displacement, which was not her call. It's an awkward position to be in.

But Notaro has never shied from the uncomfortable. Nearly nine years ago, she opened her act at the Largo in Los Angeles with the words, "Good evening, hello, I have cancer!" A couple of years later she recorded a set topless to show off her double mastectomy scars. Even the semi-autobiographical series "One Mississippi" stars Notaro as a version of herself dealing with her mother's death and cancer.

Therefore, it's not that surprising then that Notaro has tackled her unexpected "Army of the Dead" role head-on . . . once she understood that Snyder did indeed want her for the role even though she and D'Elia are nothing alike.

"When I met with Zack, I had been sent a link for me to see the original film, and I thought it was so amazing. I thought Chris was excellent in the role," said Notaro. "I just had concerns about how I could possibly do this. And Zack said, 'I'm having you because I want you to do what you do. That's what I want you to do.' And so it was just kind of full throttle support and encouragement to bring what I bring to the thing, whatever that is."

What Notaro brought set the internet on fire when the trailer for "Army of the Dead" dropped in April. In the film, she plays Marianne Peters, a military pilot with a penchant for foul language and aviators. She's part of a team of mercenaries hired to steal $200 million from a vault under the Las Vegas Strip. The catch? Sin City has been walled in because it's overrun by zombies.

With ammo strapped across her chest, a pistol on her hip, and a cigar clenched between her teeth, Peters is unlike any role that Notaro has played before. And apparently, it's a look that works for fans who've posted comments online calling her "sexy AF" or suggesting she replace all problematic actors, ranging from Armie Hammer to James Franco, onscreen.

Notaro doesn't mind green screen acting, and is open to doing multiple roles in the same movie, much like Eddie Murphy did in "The Nutty Professor" or even a movie akin to "Being John Malkovich."

"I would do that in a heartbeat as long as I'm not replacing anybody this time around," she stipulated.

Notaro has already performed some light stunt work as Starfleet engineer Jett Reno on "Star Trek: Discovery," which essentially boils down to dramatic falling onto mattresses. Her "Army of the Dead" role was an altogether different challenge. Green screen acting requires precision and a lot of imagination to pretend to interact with people, objects, creatures and backgrounds that will be digitally filled in later. Add to that having to match the movements of an actor who had already performed the part, and the whole endeavor becomes nerve-wracking. 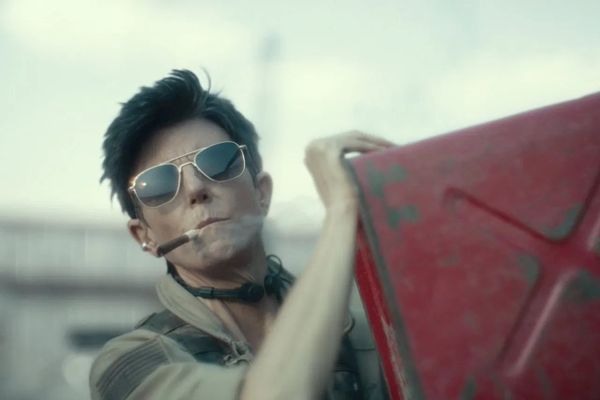 Tig Notoro as Marianne Peters in "Army of the Dead" (Netflix)

Nevertheless, Notaro slowed down or sped up her walk as needed, mimicked piloting an out-of-control helicopter and was alone on the set except for the few times her assistant would don a green suit for her interactions with other characters.

The effort paid off, and unless one is scrutinizing the film, the switcheroo is undetectable. In an earlier Vulture interview, Snyder revealed that filming Notaro and digitally inserting her into scenes still cost less than creating the movie's zombie white tiger.

Notaro stuck to the script for playing Peters while bringing her signature dry delivery. She only tweaked one detail to make the role entirely her own.

"The only thing I changed was the character smoked cigarettes. I quit smoking 25 years ago and the way I quit smoking was to not socialize for about a month and hang out in my house," said Notaro. "And I smoked those cigars. I inhaled that type of cigar, the Swisher Sweets and made myself sick to the point of never wanting to smoke again. So I couldn't bring myself to hold a cigarette. But I thought the best thing I could do is make it a cigar that made me quit smoking."

Beyond "Army of the Dead" 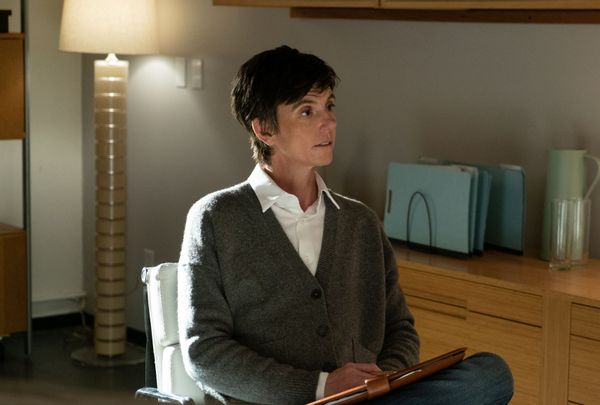 Tig Notaro in "Together Together" (photo courtesy of Bleeker Street)

Meanwhile, Notaro also appears in another film that requires far less effort; all she does is sit and talk. In the platonic comedy "Together Together," she plays a therapist to a soon-to-be dad (Ed Helms) and his surrogate (Patti Henderson) as they navigate their odd relationship.

"My agent sent me the script with an offer for me to play the the therapist," said Notaro. "I've been friends with Ed Helms for years and I just think he is one of the greatest and most ridiculous people I know. And I thought it'd be so fun to do that movie together. And I also have the experience of having had my children through surrogacy, and so it's close to my heart."

She reunites with Helms on one of her podcasts, "Don't Ask Tig," an advice show in which she and a guest – ranging from Nicole Byer and Will Farrell to Andrew Yang and Fran Lebowitz – field real-life listener questions. She also co-hosts the  "Tig and Cheryl: True Story" podcast with "Curb Your Enthusiasm" star Cheryl Hines in which they discuss documentaries.

"I had a podcast probably about 10 years ago at this point and I had been looking at getting back into podcasting. We just landed at American Public Media, and it's a fun way to connect with people out in the world that are looking for earnest answers to their questions," she said.

"I'd say Aisha's Tyler's the best [at giving advice] and I'd say who's terrible is Sarah Paulson. Sarah Paulson and I were just outrageous, we just really spiraled into nonsense on our episode."

Currently, Notaro is in Toronto to shoot the fourth season of "Star Trek: Discovery." But she's not completely done playing badass pilot Peters just yet. Netflix is also producing an animated spinoff, "Army of the Dead: Lost Vegas," a prequel set a few years prior during the initial zombie takeover of Vegas. She – along with certain "Army" stars – will reprise their roles vocally, while big names like Christian Slater and Joe Manganiello will join the fun.

"I didn't find out [about the series] initially when my agent called about the movie. That was just a fun addition to to this whole curveball that's come my way," she said. "I've always wanted to be a voice on a cartoon; that's been a secret desire of mine. So I'm really excited about that."

Even without green screens, everything is coming up Tig. Notaro also has an animated stand-up special coming to HBO this summer.

"I've had my stand up animated over the years and different little pieces. It's been really fun to see jokes and stories animated, and so I thought it would be cool to have a special," she said. "I love animation and I'm neck deep in the middle of animation in my day-to-day just because I have two four-year-olds that watch animation all the time."

During quarantine when she wasn't working or watching "Paw Patrol" and "Octonauts" with her twins, Notaro found the time to get certified as a plant-based nutritionist. She gave up meat a few years ago, embracing a vegan diet to help her with post-surgical pain and hasn't looked back.

"I'm just learning more about it and trying to help other people that have an interest, who want to change their lives or their way of eating, trying to be supportive and lead them in the right direction," said Notaro. "So much good can be done for our environment and for animals and your health, everything. I got into it for health reasons, and I already loved animals, but it just really opened my eyes to that world."

With this in mind, Notaro only has one solution to her ethical dilemma if she ever falls victim in a zombie apocalypse.

"If as a vegan I became a zombie, what would I do? I guess I would lean towards the plant-based people."

"Army of the Dead" is currently streaming on Netflix. "Together Together" is now in theaters and on demand.