The popcorn salad creator should be honored, not vilified for her cheery recipes that incorporate Midwestern food 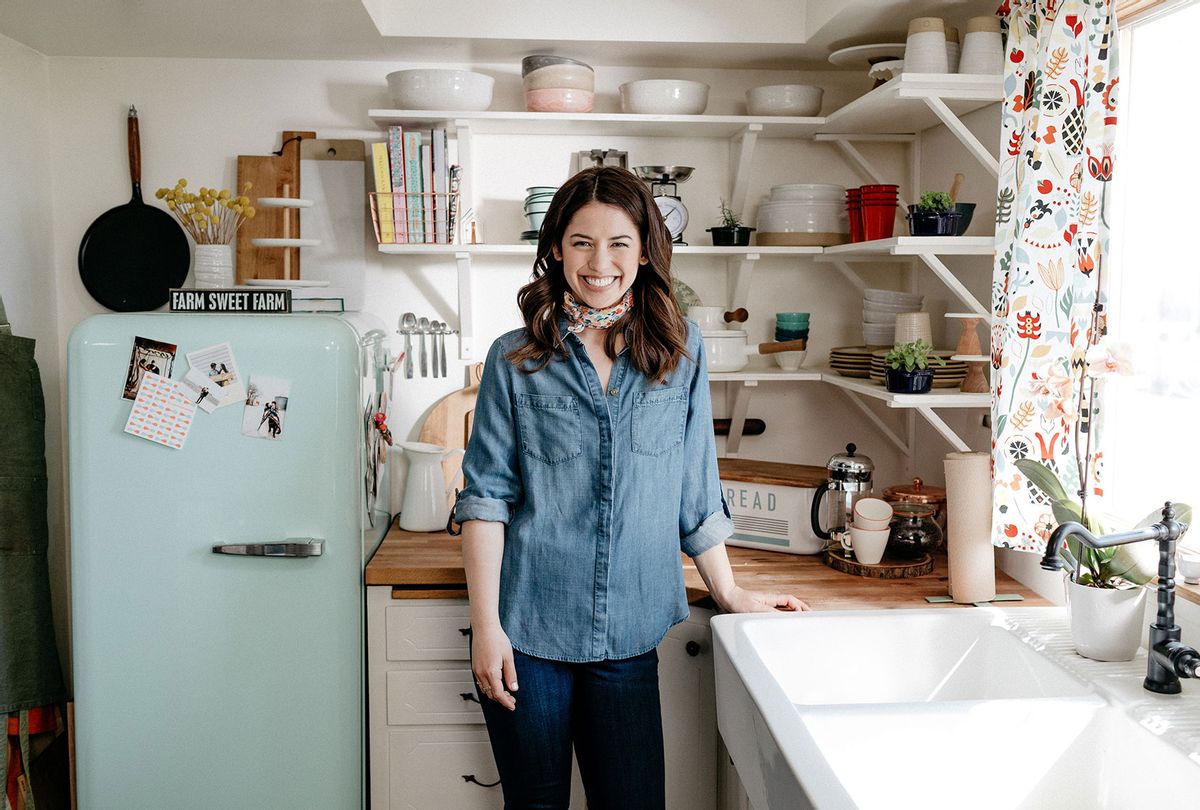 Many are not convinced that the crunchy snap pea popcorn salad is as good as advertised on Molly Yeh's Food Network series "Girl Meets Farm." While Yeh's cheerful manner is typically infectious, her approving grin as she tasted her popcorn salad may have come across to the Internet as something more akin to a grimace.

While I'm theoretically not a fan of mayo-slathered popcorn and vegetables, I do believe that popcorn salad is a side dish enjoyed by people, even if it never catches in the mainstream. Overwhelmingly, the Facebook comments section reads "I'm from the Midwest and I've never heard of this abomination." But that's the beauty of showcasing hyper-regional dishes, "classic Midwestern dishes that you would often find in a church-basement potluck," as described by Yeh. Midwestern food isn't a monolith, and there are many appetizing dishes still left undiscovered because they haven't found a place in the commercialized mainstream.

Once you get past the unauthorized use of popcorn and acknowledge it as an acceptable substitute for croutons, popcorn salad is not a poorly constructed recipe. It's relatively balanced. The sharpness of the mustard, vinegar, and vinegar are meant to combat the creaminess of mayo. Snap peas and celery offer crunch in place of popcorn.

Though it has become a point of unlikely controversy, popcorn salad is classic Molly Yeh and representative of a well-intentioned curiosity towards the culinary offerings of the rural Midwest. Although "Midwestern" cooking has come to be codified as "white people food," Yeh manages to contextualize regional recipes, creating and remixing the dishes of her new hometown with the attention that one would typically give a foreign cuisine. Within the stylized safe space of food media, "Girl Meets Farm" presents a surprisingly novel story of belonging: a Chinese-Jewish city girl percussionist existing comfortably as a person of difference on a North Dakota farm.

The casually progressive nature of the show is not a coincidence. Yeh and her show's team are careful to avoid spinning a narrative about a young woman domesticated by her husband and life on the farm or saddled with the burden of introducing her "provincial" in-laws to "exotic" foods from her culture.

If anything, the time away from urban life allowed Yeh to invest in herself and her creative projects. She may be considered one of the pre-cottagecore trendsetters back when it was called "New Domesticity," as coined by Emily Matchar. The homesteaders of the 2010s didn't end up at the farm out of a sense of motherly or wifely obligation, but rather to follow a yearning for a rustic lifestyle that included labor-intensive domestic work like baking, sewing, or tending to chickens. Within the context of third-wave feminism, followers of New Domesticity viewed their labor as valuable and less oppressive than traditional urban white-collar work, and they blogged about it in a way that emphasized their own empowerment.

To that end, being around rural Midwesterners encourages Yeh's sense of culinary adventure and presents an opportunity for a cultural exchange. She gains access to recipes like cookie salad, hotdish, and lefse (Norwegian flatbread) that one would only know by cultivating social connections. This idea of coming to understand people by understanding their food presents Midwestern food as being part of a larger culture and tradition. In fact, their dishes reflect an inventiveness when there is little access to fresh vegetables during the winter or "nonstandard" ingredients.

Her desire to do right by local culture is part of what makes lefse-making so stressful, as described in her book "Molly on the Range." "Making lefse, if it's not in your blood, takes time, practice, online tutorial videos, emergency trips to the store for a new skillet, frantic calls to your great-aunt-in-law Ethel, and a long wooden stick. Talk about a way to make a girl question whether or not she belongs in her new town." Instead of feeling limited to only foods that reflect her own background and ethnicity, her takeaway from the experience is that lefse-making is a community effort that "should also include a team of people, not just your sad frustrated self."

The recipes of "Girl Meets Farm" pull from the American public domain (such as funfetti cake), the Midwest, and Yeh's Chinese and Jewish heritage. Her recipes tend to play it safe, possibly in order to appeal to her family, neighbors, and the Food Network audience. But given that "Girl Meets Farm" is fundamentally rooted in organic experimentation, Vox's Emily Vanderwerff points out an implicit conflict present in Yeh's show model. This boils down to "whether this will be the week her mother-in-law finally exclaims, 'My god! I love tahini!'"

Despite this possible tension, her friends and family are captured performatively enjoying her creations. While this scene is typical for Food Network shows, this ending avoids a popular Asian-American media narrative where ethnic foods are presented a source of embarrassment and alienation, a source of stress for the only person without a PB&J in the lunchroom. On "Girl Meets Farm," however, it's assumed that the audience will enjoy new foods without coaxing, especially since they're often a twist on the familiar. This hanging tahini question may have less to do with Yeh's ethnicity and seems more related to the urban/rural divide. People need time to adjust to unfamiliar foods, and the novelty of Yeh's recipes contrast with the traditional attitude on a farm that food is mostly a functional source of nutrients.

Author and activist bell hooks wrote, "Within commodity culture, ethnicity becomes spice, seasoning that can liven up the dull dish that is mainstream white culture." But when Yeh incorporates Middle Eastern influences in traditional comfort foods, it doesn't come across as calculated like that of fusion restaurants experimenting in "LEGO cookery" that pander to demographics willing to overpay.

When it comes to fusion food, Yeh quite literally empathizes with her own creation. In her cookbook, she identifies closely with scallion pancake challah, referring to it as herself in "bread form": a combination of her "comfort bread" and "guilty pleasure." She originally developed the recipe for an article on a Jewish site where her assignment was to explain what it's like to be Chinese and Jewish. The recipe serves as a thought exercise and a representation of herself, suggesting that she finds her own sense of identity through food. The precedent for "Chinese-Jewish-American" culture exists visibly in few other areas, so it's encouraging to watch her and her family forge their own definitions.

Having grown up in a multicultural household, Yeh embodies a wish to coalesce the different influences within her identity. Recipe development comes from an ability to recognize universality amongst different cuisines and experiment with flavors and concepts rooted in the lived experience as opposed to pure calculation.

Despite what may sound like a tension-laden concept, "Girl Meets Farm" takes a straightforwardly cheerful attitude towards trying and making new things. While the show plays with identity through food, "Girl Meets Farm" belongs in the food media world, where this exploration can exist outside of identity politics' baggage. When the center of attention is food to be shared with others, there is not a lot of room for conflict beyond anticipating and keeping an eye on potential technical snags such as making sure that the butter is cold for an optimally flaky crust.