This Juneteenth, "Atlanta" will give you all the insights you need on how America co-opts a holiday

Wonder how a nation that refuses to honestly grapple with slavery will look as it "celebrates" its end? Just watch 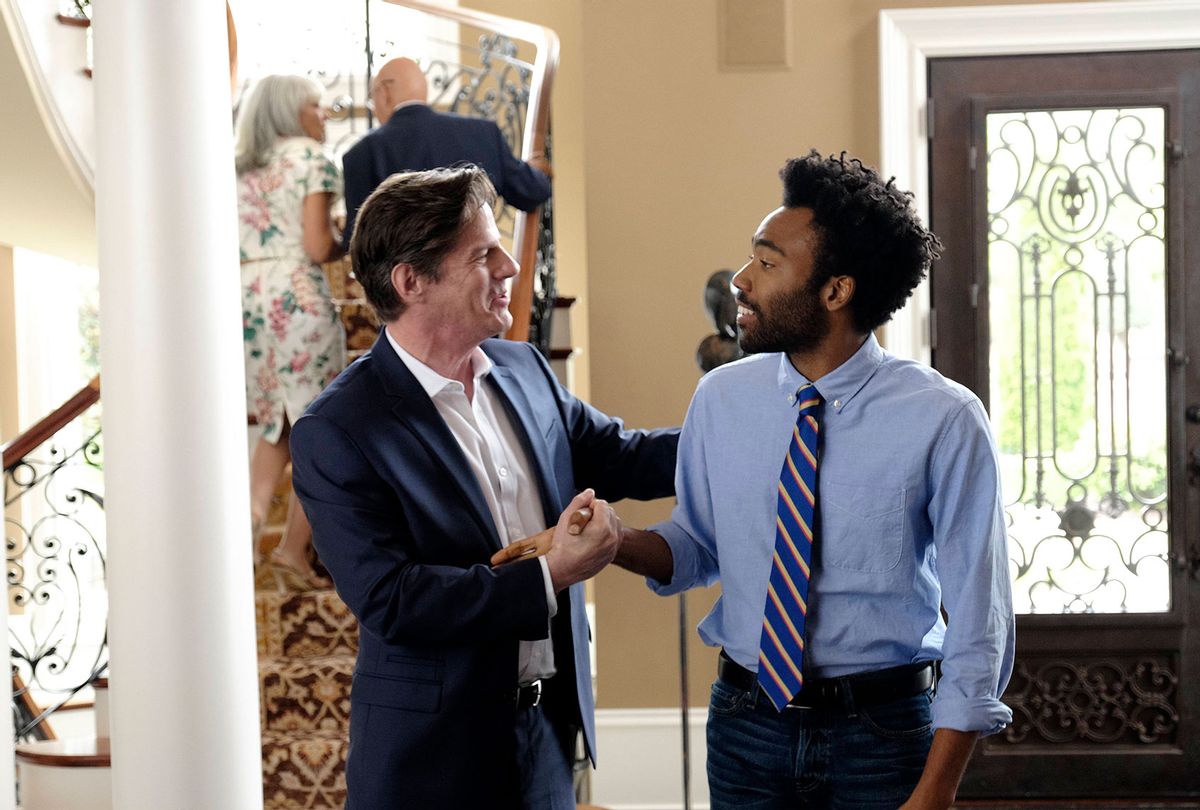 On Thursday President Biden officially established Juneteenth as a federal holiday, an achievement born of rare unanimous support in the Senate and an overwhelming majority of votes in favor in the House of Representatives.  Juneteenth is already recognized in 47 states and celebrated in communities nationwide, and was examined on episodes named after the holiday on "Atlanta" and "Black-ish." Each is extraordinary.

But to truly understand why the initialy response to the bill passing the Senate was mixed, to put it mildly, it's best to revisit the "Atlanta" take on "Juneteenth," which stands among the series' best. The show's interpretation of how this holiday may translate to the masses turns out to be more accurate, psychologically speaking. That it premiered in 2016 matters little, because the surreal mental and spiritual contortions shaping the episode's comedy are inspired by the same political and social reality in which we currently exist.

Biden called this year's observance "the first that our nation will celebrate all together, as one nation," a hopeful assessment given the circumstances. Getting Juneteenth to be a federally recognized day of observance is a hard-won accomplishment and the result of decades of work by community organizers around the country, including 94-year-old Opal Lee, the grandmother who walked from her home in Fort Worth, Texas, to Washington D.C. to rally attention to the cause. Lots of people who already celebrate Juneteenth are right to be thrilled.

This is the first new federally recognized holiday since Congress approved Martin Luther King Jr. Day in 1983. It's a huge deal. But let's not forget that the 2021 version of that holiday was turned into an opportunity for insurrection deniers to cite lines from King's "I Have a Dream" speech in their various insistences that we all move on. Plenty of us observe MLK Day by reconnecting with Dr. King's mission by way of studying his writing and his life's history as it actually was as opposed to the version of postcards. Lots of others view it as a fine day to take advantage of a white sale.

So it's likely to go with Juneteenth, also known as Emancipation Day. It commemorates the day in 1865 that enslaved people in Galveston, Texas learned they were free, two and a half years after Abraham Lincoln issued the Emancipation Proclamation. Now that it's a national holiday, the folks most likely to get a day off are, and will be, white collar and middle class office workers, a workforce segment of which Black people comprise a minority.

Provided you've kept up with the dialogue about Juneteenth on TV, you might be baffled as to why this whole business is being met with a lot of side-eye. Given the enthusiastic campaign for the holiday on "Black-ish" in 2017 and the various news reports and documentaries citing its significance before and afterward, shouldn't we all be ecstatic?

But with all due respect to series creator Kenya Barris, his "Juneteenth" episode is an ideal. Anthony Anderson's Dre pontificates about the sheer disrespect of Columbus Day's observance while Juneteenth, which celebrates actual emancipation as opposed to a mythical interpretation of a historical figure's accomplishment, remained unofficial. The foppish white guys he works for and with listen intently, make a few clueless responses. Life goes on with them continuing to not give a crap, while Dre and Bow's family enact their own celebration, clinking strawberry soda bottles next to the grill.

That's nice. That's the way it should be. "Atlanta," in its own way, shows America as it is.

In the "Juneteenth" episode Donald Glover's Earn, an underachieving Ivy-league dropout who throws all of his energy into managing his cousin's rap career, agrees to accompany his ex, Van (Zazie Beetz), to a Juneteenth celebration at the home of a wealthy acquaintance.

Earn also agrees to pretend that he and Van are married, since they're already raising a daughter together, and because they're attending this party with a purpose. The host, Monique (Cassandra Freeman), is a well-connected member of Atlanta's Black elite who can introduce Van to all the right people in order to improve her circumstances and her career prospects. Here's the original trailer for the episode:

But this is no simple, relaxed get-together with people laughing over red velvet cake. The second Earn and Van pull up to a giant multi-story mansion and are greeted at the door by their host, dripping with jewels, you can sense something is off. Monique's bright welcome has a stabbing pointiness behind it. Behind her on a staircase, a Black men's chorus sporting, shall we say, period appropriate clothing, sings dour-sounding spirituals acapella.

But when Monique wonders aloud where her husband is, and down the stairs barrels Monique's other half Craig (Rick Holmes), "Juneteenth" takes off. Craig is white, which isn't noteworthy in and of itself . . . until he opens his mouth.

"HAP-py FREE-dom-DAY!" he effuses Ebonically, shaking his head and punctuating his greeting with the kind of "mmph, mmph, mmph!" that folks use to convey either "this tastes delicious" or "it's a shame that person died." Craig is not there because he got invited to the cookout. It's his house, so he did the inviting.

Craig flops his hand through an approximation of a soul brother shake to welcome Earn, who immediately flees to the open bar. Only it's not really open; when he orders a vodka and cranberry, the irate bartender commands him to select from a list of signature cocktails with names like Juneteenth Juice, Emancipation Eggnog, Plantation Master Poison or Forty Acres and a Moscow Mule.

This is an extremely absurdist, funhouse mirror reflection of Blackness appropriated by whiteness, Juneteenth may a holiday commemorating the end of a people's bondage, but here, with his "Real Housewives of Potomac"-read woman at his side, it might as well be Craig Day.

Craig has studied Blackness to the point of viewing Black people as a hobby; Monique even says as much. Believe it or not, though, that's less of a problem than Craig's insistence that he knows Black people better than they know themselves. He gloms on to Earn, chastising him for not having made a pilgrimage to "the Motherland" after Earn notices Craig's photos from Africa. Earn asks him if he's an archaeologist in African studies and Craig says no. "I'm an optometrist."

"That nigga told my 95-year-old grandmother she was cooking her collard greens wrong!" Monique tells Van.

"Atlanta"'s dreamy cinematic style lends itself to finding an assortment of metaphors within each plot. In 2016, when the episode first debuted it was simply riotous. Watching it through the lens of this moment, however, "Juneteenth" becomes a parable about compromise.

The example of Monique's relationship with Craig is the concise example; she likes her husband, she says, "but I love my money."

But this is a view that benefits the few and sells out the many, demonstrated in Monique's cavalier treatment of the catering staff as if they are her servants, extras in the background of the theatrical performance on Juneteenth she's staged in her luxurious home.

Van tries to play along – "Do you think that I'm happy that I have to prostitute myself for an opportunity?" she had confided to Earn – but eventually her character work falls away and the only thing she can do is numb herself with whatever poison is in the crystal tumbler she's clutching.

Texas made Juneteenth a state holiday in 1980, with other states following suit in afterward. A concerted push to have it recognized as a national day of observance grew strong enough for a bill to be introduced to the Senate floor in 2020 and would have passed if not for the lone dissent of Wisconsin GOP Sen. Ron Johnson.

However, with those same conservatives on Congress and in state governments working very hard to ensure schools won't accurately teach students about America's reliance on slavery and its role in creating the systemic injustices we're contending with today, one wonders how many people will actually understand the meaning of the day.

There's also the tendency to mark such days of observance with long gazes at Black suffering. National Geographic is premiering "Rise Again: Tulsa and the Red Summer" at 9 p.m. on Friday, June 18, and it's a stalwart and worthy study of a suppressed part of the Black experience in this country.

It's also a strange choice to schedule in proximity to a day that's meant to highlight Black liberation and joy. (One option on that front might be to check out Turner Classic Movies' cinematic celebration of Juneteenth, starting at noon.)

Assuming all of this is presented in a spirit of either ignorance or meaning well, it's also the problem . . . and it also informs the awkward signifying of the many, many Craigs out there in the world.

For all of his cringeworthy bull, Craig is a notch or two better than the person who committed to supporting Black Lives Matter last summer only to abandon it and gripe about "critical race theory" this year.

But he's also as wrongheaded as the people who, to use a recent example, responded to NPR critic Eric Deggans' valid and respectful challenge to Tom Hanks to be anti-racist instead of letting the world know he's not racist by accusing Deggans of trying to tarnish the beloved actor's reputation or submitting him to some impossible-to-pass purity test.

Neither is the case, but as Deggans observed in a tweet after brushing off the backlash, "Sometimes, to be a good ally, white people just need to listen to people of color when we tell u [sic] what we need. Regardless of how much good work you think you have done."

Deggans is describing Craig to a tee. His home is a showcase of his "good work." He lectures without listening. He worships some idea of Blackness but it's all the more obvious that he doesn't fully comprehend Black culture or struggle.

He will signify, and those who happen to travel in his circles will nod along, applaud his craziness and avail themselves of the lovely spread he puts out. But would he throw a portion of his wealth into pushing back against GOP efforts to kill the For the People Act, designed to protect voting rights on a national level and counteract recently passed state laws meant to restrict voting?

He may celebrate the fact that our new national holiday was won, in part, by the efforts of protesters marching in the wake of George Floyd's murder last year, while saying little to nothing about Republicans insistently opposing the George Floyd Justice in Policing Act of 2020.

Honest conversations about the nastier parts of American history and systemic racism are uncomfortable, and as Jenifer Lewis's grandmother Ruby observed in "Black-ish," "white people hate being uncomfortable." But they can definitely get behind another federally recognized day out of the office.

And as I re-watched both "Juneteenth" episodes the image that stayed with me the longest is one that's simultaneously hysterical, perverse and possibly predictive. Part of the evening's entertainment shows Craig doing a slam poetry performance for his Black guests declaring, head thrown back and eyes shut, feeling the spirit, "I am a man, but Jim Crow is haunting me!"

This is his version of celebrating all together, as one nation . . . but under a groove he grabbed from other people that gave the form its beats, meaning and measure. That scene is one of the funniest things you might see if you choose to watch. It's also a postcard shot of sorts, sending us a view of at what it looks like to gain a day of recognition from the same forces working to erase the history and meaning of what brought us there.