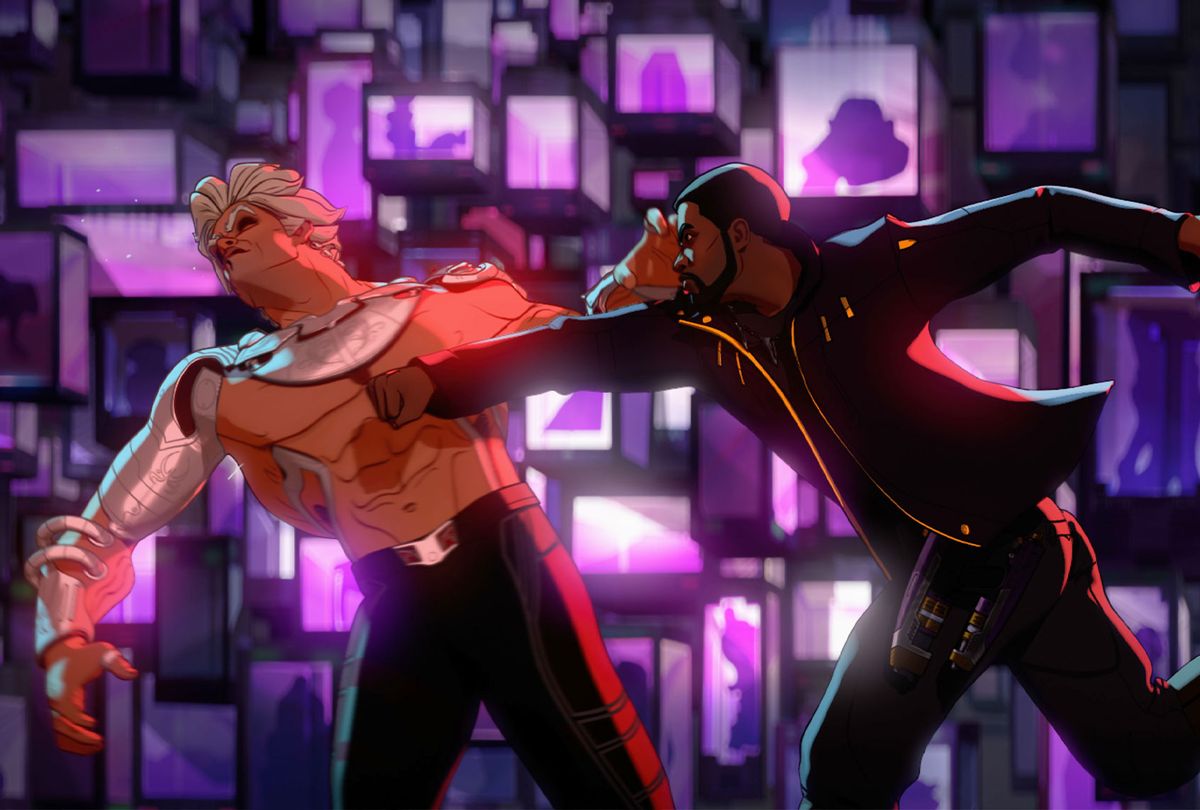 T'Challa punches The Collector in "What If...?" (Disney+/Marvel Studios)
--

How strange it is to consider the second episode of Marvel's "What If...?" in the context of what we know instead of losing ourselves entirely in its musings about infinite possibility. The difference in consideration is subtle but changes much; it's the shift over from what could be to what might have been.

"What If . . . T'Challa Became a Star-Lord?" gives its audience a bit of both, sending off Chadwick Boseman's hero with a tale establishing the Wakandan crown prince as something more than simply the Black Panther. If T'Challa's reach had not been limited to Earth, posits the episode's writer Matthew Chauncey, he could have become one of the most consequential figures in the galaxy.

Boseman's voice work on "What If...?" represents his final performance and knowing that hangs a mournful weight upon it despite the boisterousness sparkle in the actor's voice. It's only the second episode of this season, so it's unclear whether or when this T'Challa might reappear.

But this proper tribute becomes even more emotionally resonant when you remember that the actor recorded the lines for this episode while contending with late-stage colon cancer, a bleak secret he kept from everyone except for those closest to him.

This episode premieres 10 days prior to the one-year anniversary of his passing, the shock of which took much of the world by surprise. His final film performance in "Ma Rainey's Black Bottom" would be released after his death and earn him a Golden Globe and an Academy Award nomination for Best Actor.

His work in "What If...?" is distinguished by the joy he took in participating, however – which is not to imply anything negative about his film work. Instead, it ensures that his fans will be left smiling at the care he took in rendering T'Challa and appreciating the actor's awareness of the legacy he's left behind through the character.

In the same way the series premiere inserts Peggy Carter into Captain America's uniform because of the most benign tweak to her actions in the main timeline, the second episode wonders what would change if the space pirates known as the Ravagers had swiped T'Challa before he became the Black Panther instead of "Guardians of the Galaxy" hero Peter Quill.

The Watcher, voiced by Jeffrey Wright, frames the larger question posed by this scenario thusly: "Is your destiny determined by your nature, or the nature of your world?" Based on the way the story plays out, however, what it's really wondering is how much better off our corner of the universe would have been if Yondu Udonta had picked up a kid blessed with an unshakable sense of rectitude as opposed to one whose moral compass had barely begin baking.

No offense to Peter Quill, but the way Chauncey establishes the young T'Challa's personality (voiced by Maddix Robinson) makes a strong argument that our timeline's Yondu grabbed the wrong guy back in 1988. Then again, this animated version of Michael Rooker's Yondu, the adoptive father to both Star-Lords, is a gentler being.

Since he outsourced the kidnapping to his top goons Taserface and Kraglin, neither of them geniuses, he acts like a man who realizes he has nobody to blame but himself. And he's more taken by T'Challa's curiosity than anything else. The Wakandan King T'Chaka (John Kani, also reprising his film role) knows his kingdom's boundaries can't hold his son.

"While the blood of a king runs through your veins, it is pumped by the heart of an explorer," he admits to the boy before he's abducted.

As an adult, he's a famous Robin Hood-style outlaw whose sole superpowers are persuasiveness and a considerate champion's soul. Chauncey and series director Bryan Andrews open the episode with a version of the scene where Peter Quill steals an Infinity Stone from a desolate planet.

But instead of being treated like a nobody when he drops his mercenary moniker, Djimon Hounsou's Korath the Pursuer gushes like a fanboy. T'Challa's Star-Lord is famous, having convinced the Ravagers to change their criminal ways and steal from the rich to give to the poor.

After Korath bests this famous Star-Lord in a duel, T'Challa fulfills his wish and brings him into the fold. And the Infinity Stone? It goes to a proper place as opposed to the highest bidder. "You know as well as I no treasure is worth as much as the good that can be done with it," T'Challa said.

Besides, thanks to T'Challa's influence, there's no mad titan trying to wipe out half of all sentient life in existence. The episode's gigantic surprise is that T'Challa halted Thanos (Josh Brolin) from carrying out his insane genocidal plans simply by talking him out of it.

"Sometimes the best weapon in your arsenal is just a good argument," Star-Lord says, before Thanos admits for the first of several times that he still thinks it's a good idea.

Meanwhile, the last image we see of Peter Quill shows him mopping the floor in a Dairy Queen before his Celestial father Ego (Kurt Russell) drops by to pick him up . . . which could be an issue needing to be dealt with at some point down the road.

"What If…?" is an action series above all, making all these optimistic vibes are accessories to a larger mission brought to him, Yondu and their crew by Nebula (Karen Gillan). Apparently T'Challa didn't get to Thanos and Nebula before whatever Thanos did drove a wedge between father and daughter; she still harbors anger towards him (talk therapy isn't a one-size-fits-all solution to every problem, even in a Marvel fantasy!) but affectionally refers our hero as "Cha-Cha."

Together they stage an "Oceans 11"-style heist requiring them to pay a visit to The Collector (Benicio del Toro), this version of the galaxy's most formidable kingpin since Thanos went straight.  Their quarry is a treasure called the Embers of Genesis, a few flakes of which can terraform an entire planet. If they succeed, they can use it to restore countless dying planets, saving a staggering number of beings from starvation. They do, of course, although there are a few nail-biter moments along the way.

Sweetening the take is T'Challa's discovery of a Wakanda galactic vessel among The Collector's horde, which he uses to reunite with his family of birth and introduce them to his space-traveling family of choice.

Over the years a number of shows and movies have included scenes of a character insisting their family and friends deliver their funerary testimonials while they're alive, usually so they can provide notes. Such turns are usually played for laughs and serve to prove the character's narcissism. But not always; the "Better Things" episode "Eulogy" shows how such exercises can be incredibly loving and genuine.

The spirit behind this episode comes from a different place, mainly because the people making it weren't aware that its star knew it could be one of his final acts. That sorrowful surprise lends it an affectionate shine some might interpret as overly sentimental. That estimation isn't entirely off, given the unapologetic idealism dominating this episode, along with its near lack of crisis or any sense of a real threat to its protagonists.

My response to all that is, indeed, those are valid criticisms. But the charm of "What If . . . T'Challa Became a Star-Lord" renders all of that beside the point. Of higher importance is the way the actor and the episode's creators caters to the fondness Boseman's fans still carry in their hearts for him by sending him off with a fantasy proving his power to bend wills not through vibranium enhancements or mystical endowments, but principled debate and reason.

"On any planet, among any people, there ain't no place in this galaxy where you don't belong," Yondu tells T'Challa. Quite a legacy for man to leave in his wake.

New episodes of "What If...?" premiere Wednesday on Disney+.