Marvel 's "What If...?" is a thrilling ride into the multiverse, albeit with minor irritations

Marvel Studios' first animated series draws out our greatest hopes for our heroes, but in an alternate universe 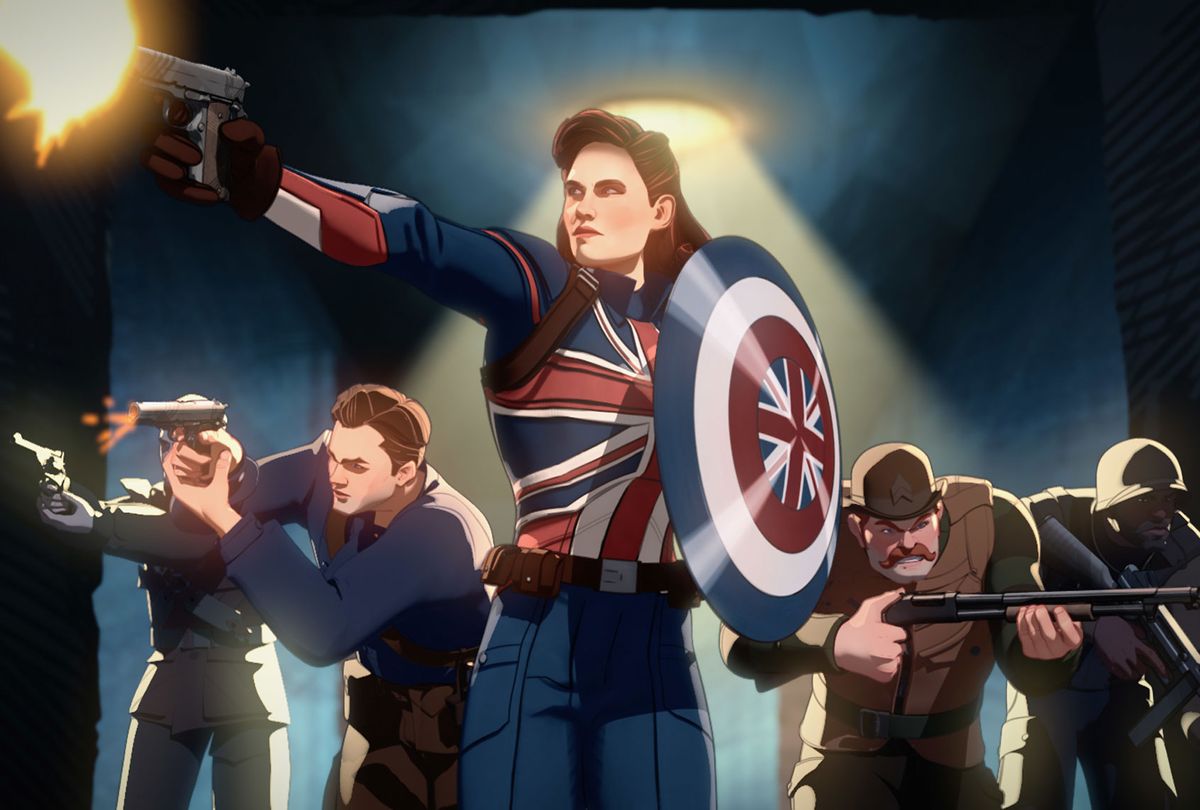 At some point recently, Disney changed the avatar, banner and name on the official Captain America Twitter account over to showcase Captain Carter, star of the "What If . . .?" animated series debut.

Chances are you've never of Captain Carter before. That's because in the version of Earth we visit in the Marvel universe's primary continuity, Earth-616, Peggy Carter's adventures have played out in ABC's "Agent Carter" and via glimpses in various "Avengers" films.

"What If . . .?" shows her in a reality only slightly removed from our own where, in a split-second decision, she's the one who gets the super-soldier serum instead of Steve Rogers. All the action that follows is somewhat predictable, especially if you recall the obstacles Steve had to overcome despite achieving instantaneous swoleness.

Steve had to fight to be taken seriously – and he's a man. Now envision how the establishment would handle a superhuman Peggy in a pre-women's liberation movement society, despite her proving that she's faster, stronger and more capable than any man in the field.

Or don't, since "What If . . .?" does an impressive job of playing that out for us with an endorphin-boosting feminist romp.

Thrilling at Peggy Carter leaping through the high points of the good Captain's first missions, albeit slightly tweaked, is a fine way of introducing a show hinged upon transforming our presumptions about this universe.

"What If . . .?", along with being the first animated series from Marvel Studios, is an anthology bound together by an interdimensional being who refers to himself as The Watcher. By allowing us to gaze upon infinite realities, he shows how the tiniest decisions can alter everything we know. The impact of these small changes range in each episode from the slightest deviations from Earth's familiar history to complete rearrangements of the cosmos.

Each of the three half-hour episodes made available for review locked me in with breezy scripts, an agile narrative energy and a mesmerizing, near-photorealistic animations style. The second "What If . . .?" doubles as a hypothetical case of how the universe might have realigned if Yondu and the Ravagers had swiped T'Challa before he became the Black Panther instead of "Guardians of the Galaxy" hero Peter Quill and as a highly enjoyable short heist flick. The third is a classic whodunnit.

Many of the stars originating the live-action versions of these heroes voice their animated versions, including Hayley Atwell, Chris Hemsworth, Samuel L. Jackson, Michael Rooker, Tom Hiddleston and Mark Ruffalo.

Every show that Marvel has released so far is entertaining enough to drive fervent dialogue during their respective runs, with a couple achieving more depth and clarity than others. But "What If . . .?" holds the highest potential for longevity among all the shows we've seen so far, due to its relative freedom from either contributing to or connecting with the existing universe moving forward.

Of course, the magic of "Loki" is its means of letting us know that the next phase of these stories can and will break into any number directions, hence the concrete introduction of the multiverse. Some of the details that play out in "What If . . .?" might show up later, or not. Such is the way of storylines involving alternate universes as they play out in limited comic book series.

For that very reason, I've enjoyed these alternate universe excursions as much as I've been annoyed by them, because they've struck me as a way for Marvel to have it both ways in terms of representation. Much in the way that Marvel gave Scarlett Johansson's Black Widow an incredible solo outing that is of of little to no consequence to the main timeline, we can applaud a jacked-up Peggy Carter flipping over Nazi tanks while sexist fanboys reassure themselves that her Captain isn't part of the "real" stories.

Those same purists can reassure themselves that Peter Quill is still Star-Lord in the movies, in the same way they parse the legitimacy of Miles Morales in the Spider-Man universe. (You'll also notice that Miles, an Afro-Latino teen who lives in an alternate universe's New York, is animated. The Peter Parker we've see in all of the live action "Spider-Man" movies is white, which was stipulated in the character's legal licensing agreement between Sony Pictures Entertainment and Marvel Entertainment revealed as part of the Sony hack.)

The reaction a swath of the public had to the Captain Carter takeover of the Captain America hints that I might not be alone in this camp, since Marvel only recently changed its social media avatar for the character over to Sam Wilson's face. Replacing that with Peggy Carter plainly took a lot of people by surprise, and I am guessing many of them had no idea of what "What If . . .?" is about or that Captain Carter's origin would serve as the tale launching it.

All they could see is that Marvel disappeared its first Black Captain America from its social media account and replaced him with an animated British white lady.

If one were to measure the level of public outcry surrounding this situation, it's more of a yip than a roar, bound to die down once the show debuts. This will be more the case when the T'Challa episode premieres.

Marvel Studios asked reviewers to refrain from going into details about these episodes, but this episode's philosophy is worth noting since series director Bryan Andrews and head writer AC Bradley carefully designed it to be as much of a tribute to the late Chadwick Boseman (who lent his voice to his animated counterpart) as an uplifting, action-driven story.

Here, the "what if" isn't merely a swap of physical characters but moral ones as well: "Guardians of the Galaxy" presents Peter Quill as a goofball whose identity is heavily shaped by the universe. This episode games out what would happen if a transformative being were able to do the opposite.

The answers to that aren't merely entertaining, they are gigantic. This and the next episode highlight the vital importance every character has in these stories, down to the smallest supposed background figures. However, the third episode's set up has much more of an "if/then" structural progression than the other two, which are more emotionally enlivening.

Animated series like this tend to be passed over by a mainstream audience that still hesitates to take such presentations as seriously as live action shows. "What If…?" won't be the title that changes that attitude, although it makes a fierce case for relaxing such a limiting paradigm.

Regardless of any irritation people like me might hold toward the principle of one-off alternate universe stories, there's a strong throughline of personal power and consequence in the best of these stories. Perhaps it reminds us why these narratives continue to exert a pull over our collective imagination for good or ill, revitalizing a franchise that has stretched past two dozen interconnected films. Maybe it's just an exciting late-summer diversion. Even if it is, it's one worth considering.