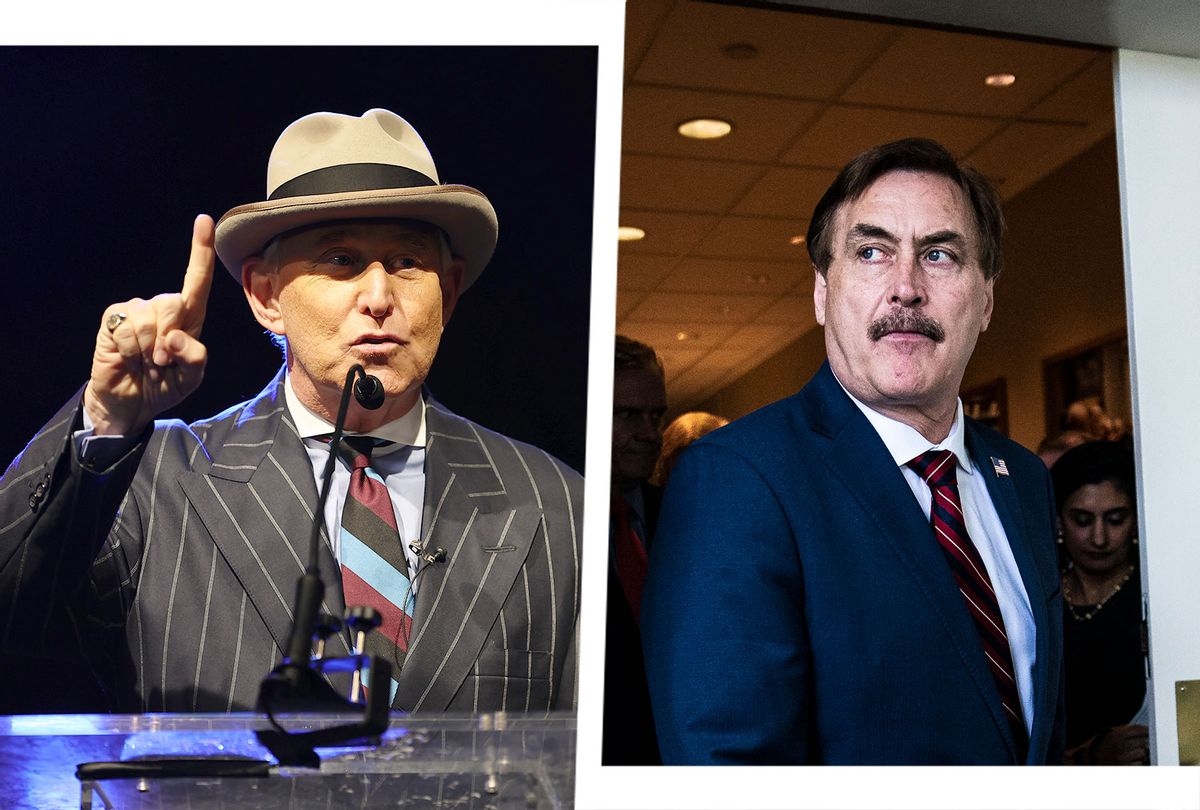 Veteran GOP operative Roger Stone suggested this week that MyPillow CEO Mike Lindell, a prominent pro-Trump election truther, is being "stabbed in the back" by some of those around him, including Lindell's own advisors and Steve Bannon.

Stone's remarks, which came on a far-right QAnon-themed internet program, seem like an effort to defend the pillow tycoon, whose credibility in TrumpWorld is declining as he repeatedly fails to produce any hard evidence of 2020 election fraud.

"I think Mike Lindell has done great work," Stone told host Jeffrey Pedersen, who goes by the alias "The Matrixx." "I think he's been disserved by some of the people working for him. But he's got a heart of gold. He's a patriot. His instinct is absolutely correct. He has produced enormous evidence of irregularities in the election.

"But the left excoriates him, because he has the courage to speak the truth," Stone continued, "and then, making it even worse, you have people who are at least allegedly on our side like Steve Bannon, stabbing him in the back, questioning his public credibility," he continued.

Stone didn't return Salon's request for clarification on what advisers, other than Bannon, he thinks are misleading Lindell.

Stone described Bannon's alleged betrayal as "no surprise to me," referring to his extended beef with the onetime CEO of the 2016 Trump campaign, who testified against him in federal court back in 2019.

On Monday afternoon, Stone said on the far-right Infowars site that he has "never subscribed" to the idea bolstered by Lindell that Trump will be reinstated as president at some point this year. (Lindell originally claimed this would occur in August, and has had to revise his estimate.) "I love Mike Lindell, but there is no legal precedent for that, that I can see," Stone added. "I still don't see the election results being reversed."

During Lindell's recent South Dakota "cyber symposium," where he said he would unveil clear evidence of election fraud, Bannon appeared to distance himself somewhat from the pillow tycoon's discredited "packet capture" claims.

Bannon noted on the second day that Lindell had still not produced evidence to back up his allegations that a Chinese hacking operation had altered the results of the 2020 election. "Yesterday was kind of a good way to set the stage, a lot of interesting analysis," Bannon said on his "War Room: Pandemic" podcast at the time. "But we understand people want to see what's going on."

Former Breitbart editor and co-host Raheem Kassam agreed, saying that it was time for Lindell to show his evidence. Some of his own supporters were using "colorful language," Kassam said, out of frustration that the case hadn't been proven. "Yeah, I think a lot of people who have been following on a day-to-day basis are really keen to get the data and all the evidence upfront," he added.

Bannon suggested that Lindell's event had been mismanaged, but predicted a big data reveal on the second day — which did not happen. "I would have done it differently," he said. "Mike is his own guy. I understand. It's his show. I would have come out and overwhelmed immediately with packet captures and data and show, hey, here's what I got, pull the camera back and then frame it and then continue."

In a final swipe, Bannon said that Lindell's decision to show the same "movie" four times during the so-called symposium was not helpful. "I think this is a mistake," he said. "I don't think they should play this movie again. I want to be brutally frank. You've laid a theory of the case out here that's very powerful, but in laying that case out, you've got to bring the receipts."

Both Stone and Bannon have at various times hawked or promoted Lindell's products, including sheets, pillows and dog beds. They now appear to be tiptoeing away from Lindell's extravagant and utterly unproven claims, although both have arguably benefited from proximity to the MyPillow guy's estimated $300 million net worth.

Lindell didn't return a request for comment from Salon, perhaps still convinced this publication is staffed with undercover antifa agents.