"Vacation Friends" is a happy buddy comedy in a world where race doesn't matter. That's a problem 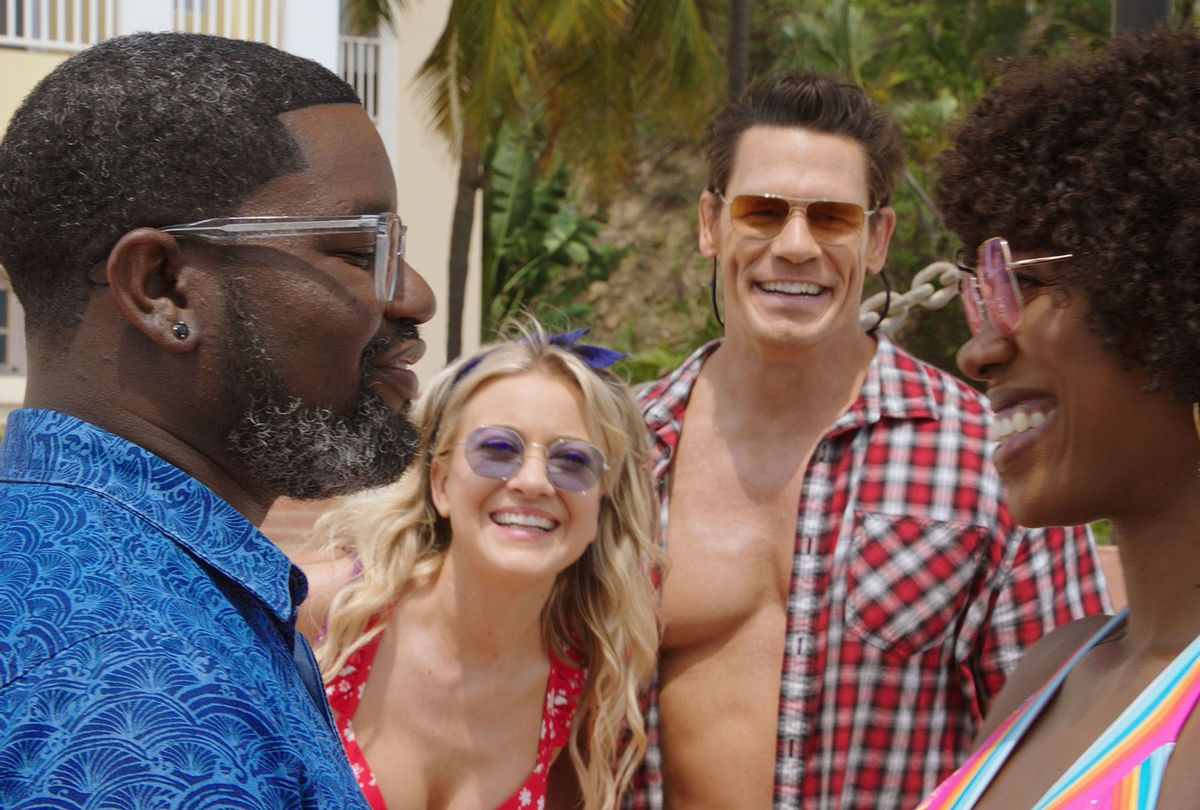 Buddy comedies are basically arranged marriages between stars people want to see together. That's what makes the genre such reliable crowd-pleasing fare: besides knowing that everything will end well regardless of how each person feels about the other when the movie starts, it gives the audience a chance to see whether favorite actors of the moment share chemistry.

Tossing an interracial component into the mix generally changes the tone, though – unless, as in "Vacation Friends," the filmmakers ignore it entirely.

Clay Tarver's harmless flick marries the dual appeals of John Cena and Lil Rel Howery into a comedy of misread intentions and substance-fueled mishaps that begins at a Mexican resort and ending at a destination wedding at a lodge and spa on the outskirts of Atlanta.

Cena's Ron and his girlfriend Kyla (Meredith Hagner) are a couple of hedonists who cross paths with Howery's Marcus and his girlfriend Emily (Yvonne Orji of "Insecure") on the vacation during which Marcus intends to pop the question. Marcus plans every moment of his life meticulously, making his and Emily's crash into the devil-may-care Ron and Kyla both a blessing and a curse.

Ron is a gigantic goof who either doesn't read body language well or ignores it entirely, overpowering the smaller, meeker Marcus with his gigantic personality and boundless acts of kindness.

This is how he and Kyla insinuate themselves into Marcus and Emily's vacation, forcing them to toss all plans to the end and rip through their week in a crazed binge of drugs and alcohol. At the end of their trip Ron and Kyla think they've made new forever friends, which Marcus and Emily don't disclaim. That's how temporary vacation relationships work. Except in buddy comedies.

The Mexican vacation half of "Vacation Friends" operates on a framework employed in any number of films placing the buddies in question and their devoted partner (in Emily's case) or willing sidekick (which describes Kyla) in unfamiliar locations and, therefore, on a playing field that's more or less even. If you've seen classics like 1987's "Planes, Trains and Automobiles" or 1991's "What About Bob?" you have some notion of how this plays out.

Cena makes Ron a lovable Labrador with inexplicably deep pockets, the kind of confident guy who talks Marcus and Emily into precarious situations and gets Marcus comfortable enough to let go. Marcus steers into a few disasters in the bargain but everything turns out fine, largely because nothing matters. They're all Americans in a Mexican tourist town whose denizens cater to their rowdiness.

It's when the film picks up seven months later at Marcus and Emily's wedding – which Ron and Kyla crash, figurative and actually – where the social dynamics get peculiar. That is, if you think about them, which is contradictory to the point of a buddy comedy.

But why shouldn't we? After all, one of the reasons interracial buddy comedies are a standard is because they create a fantasy of friendship between a white male protagonist and a Black male protagonist, let alone a white guy from Oregon and Black man who lives in Georgia, that in the real world would be highly unlikely. The women in these films are secondary figures, which is unfortunate. Orji is a wonderful comic actor whose talent is criminally underutilized here, while Hagner's bubbly slapstick, reminiscent of Goldie Hawn in her heyday, is overshadowed by Cena.

The "Vacation Friends" writers (Tom Mullen, Tim Mullen, Jonathan Goldstein, John Francis Daley and Tarver) up the ante by making Ron and Kyla the minorities at an Atlanta-based wedding where the bride's family is significantly wealthier and more bourgeois than the groom's – and Emily's father Harold (Robert Wisdom) won't let him forget it.

Harold demonstrates a strain of WASP-y assimilationism that even his younger relatives can't quite get behind, including insisting that everyone embark on a formal fox hunt and then critiquing Marcus for not having the proper number of buttons on his jacket.

Ron, meanwhile, shows up looking like an actual hunter in camouflage and drabs. Nobody says a word, largely because he's already ingratiated himself with Harold by revealing that he served in the military.

After that (and before, actually) nothing Ron or Kyla say or do that's odd or tasteless is attributed to their whiteness, not even in jest. If their actions make them the center of attention, which frequently happens, everyone simply goes with it. Then again, the reason everyone likes them is because regardless of how loud or déclassé their behavior is, they're deferential and sweet to the family elders. Most never witness the times Ron oversteps his boundaries with Marcus, which is what all clowns do to the straight man of the pair in these movies.

Race never comes up. Not once. Whether that's a point of celebration or criticism depends what a person expects from a movie like this.

"Vacation Friends" has been in development since 2014 and was originally supposed to star Chris Pratt and Anna Faris in the roles Cena and Hagner play. This alone explains why the teaming of Cena and Howery comes across as energetically lopsided.

Less believable is the presentation of Black folks mounting a fox hunt, with hounds, in the woods, in Georgia, as, you know, something that happens at Black weddings. (This is not to say there isn't a Black family in existence with such traditions, but let's just say it's the first time I've seen it in a movie.)

Consider a few other factors, too. "Vacation Friends" represents the friendship subgenre of the interracial buddy comedy formula as opposed to the cop version immortalized in the likes of "Cop Out," the "Lethal Weapon" series, "48 Hours," "Beverly Hills Cop," or "Running Scared," to name a few.

In that sense it's more dependent on audiences perceiving the onscreen friendship to be more comfortably good-natured, especially in the current era. Next to the crackling chemistry Gene Wilder and Richard Pryor shared onscreen, Cena and Howery are bland as saltines. Then again, many of the gags Wilder and Pryor pulled in their movies wouldn't fly today. Hell, some of the racial humor in Will Ferrell and Kevin Hart's comedy "Get Hard" aged badly, and that movie was released in 2015.

However, here we are in 2021 with a perfectly serviceable comedy about Black people and white people mixing harmoniously with no problems whatsoever, written by white men for a cast that's mostly Black.

It's natural to take comfort in the simple humor of "Vacation Friends" without pondering everything its subtext implies, the positive and the questionable.

The affection fueling the friendship Ron assumes that Marcus shares comes from a touching place that, again, has nothing do to with race. Indeed, revealing that detail underscores the idea that Ron only sees Marcus' beautiful spirit and solid character. That's lovely.

But that does not match the current social atmosphere, and it doesn't trust Cena's and Howery's abilities to speak honestly and humorously about their very obvious differences in terms of upbringing, class and yes, race, and how those traits impact the way the world sees and treats each of them. These actors are audience favorites, evidenced in the number of summer movies they've showed up in lately. They could pull this off. It's a shame nothing in the script gives them a chance to do so.

Instead, "Vacation Friends" holds in place the idyll of a comfortable fantasy predicated upon the thinking that if nobody acknowledges the very real prejudices Ron and Marcus would have to overcome in order to forge a true friendship, even if only for a moment, then nobody else does either.

No movie is supposed to solve all these problems, and certainly not a dumb, fun dog days of August comedy release. The simple pleasure of buddy comedies rest in the way they allow us to forget our problems for about two hours and simply laugh our asses off at, say, Cena's Ron and Howery's Marcus tripping balls in a field while a crunchy Beastie Boys track bounces in the  background.

But in the ways I've mentioned, "Vacation Friends" joins a long list of such comedies that promote the fantasy that the racial strife between white people and Black people is a matter of perception, not reality.

In that view to be honest about the realities of the world these characters purport to travel and live in would be a downer. So instead of bringing candor and humor into this mix and trusting talented and able comic actors to handle such societal obstacles with grace and levity, they don't address them at all.

Instead what we get is a film with a mostly Black cast that assumes a level of racelessness as some white people imagine it  – a wonderful comedy about Black and white friendships for people who see no color, and love an opportunity to ignore their troubles and retreat from it all.