How civilizations thwart extinction in the face of existential crises

History contains many stories of societies that foresaw crises and did nothing. Will we be the same? 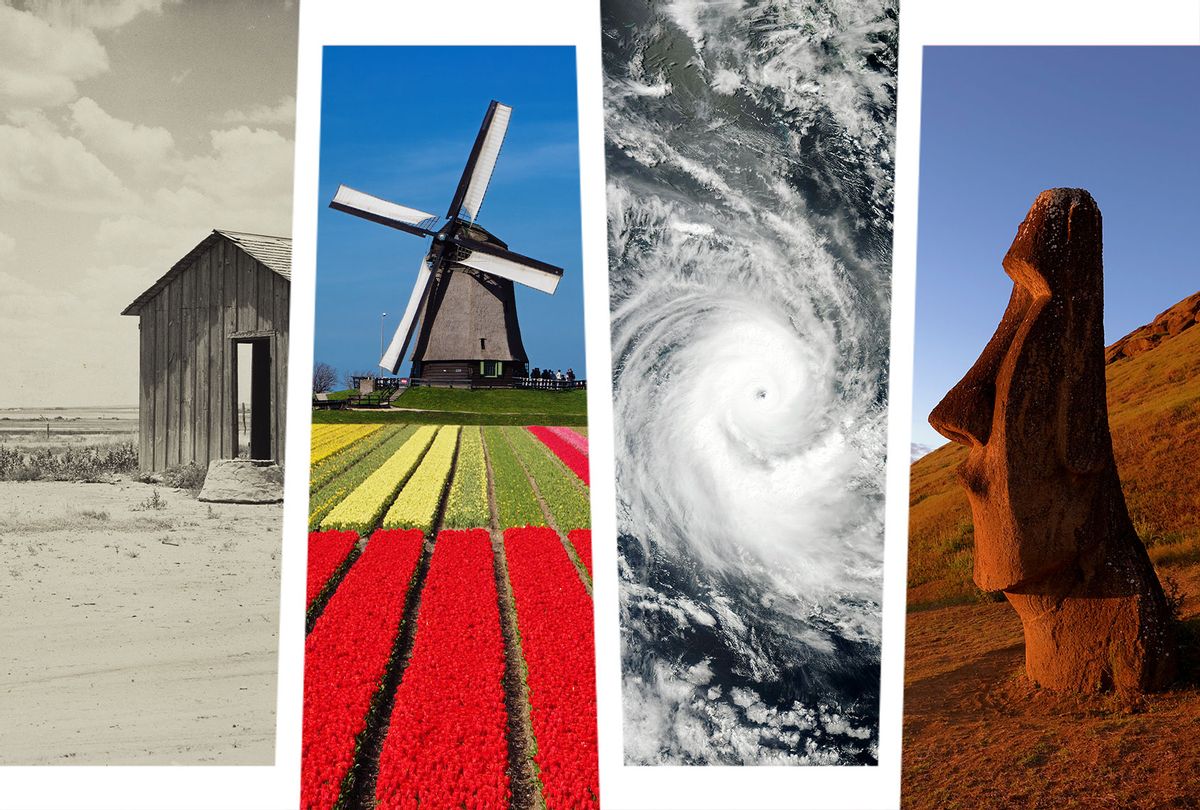 The Dust Bowl, a windmill in the Netherlands, a Hurricane, and an Easter Island head (Photo illustration by Salon/Getty Images/Sepia Times/NASA/Michael Dunning/Adam Jones)
--

Humans set ourselves apart from other animals in our ability to recognize and stave off coming threats. A tiger or a dove cannot plan for a flood that might be decades off, and then build their dens defensively; humans, on the other hand, are blessed with the ability to predict and anticipate threats that may be far in the future.

It is odd, then, to think that American civilization is (for the most part) keenly aware of the threat of climate change, yet so far incapable of compensating and overcome it. We build our cities to withstand hurricanes and floods, heat and cold; we build dams and windmills, and re-routed the Colorado River to keep Phoenix and Tucson hydrated at a cost of $4 billion. Now, we are keenly aware of the existential threat of climate change — of its potential to disrupt our lives in unimaginable ways, or even bring about the end of human civilization. So why is it that our civilization can't wrap our minds around it?

Part of it may be that reality is hard to imagine. For one thing, no one alive today has lived through the collapse of an entire civilization; the actual day-to-day experience of witnessing that process is alien to us.

Still, it is difficult to conceive of why any society, particularly ours, would allow itself to be brought to extinction. We already know climate change is feeding the wildfires that consume the Pacific Coast and causing rising sea levels which will soon flood cities like New York. Large sections of the planet will become too hot or dry to inhabit (goodbye, Phoenix), extreme weather events like hurricanes will be much more common and supply chains for everything from food to microchips will break down.

Yet despite this knowledge, we still seem poised to "walk the plank with our eyes wide open," to quote Gotye's hit 2010 song on the topic. Even after the United Nations climate panel release yet another report warning of an environmental apocalypse unless we eliminate greenhouse gas emissions, humanity is not doing the one thing it must: Dropping all other priorities until the existential threat is neutralized.

The strange thing is that, if you look to history, there are other situations in which societies faced, and recognized existential threats. Some rose to those occasion and overcame them; others saw the writing on the wall but were incapable of changing their ways. The sagas of previous civilizations that recognized these threats — and either bowed to them or planned around them — are key to understanding the plight of our empire as it struggles to address the climate crisis.

We can start with a lesson in when things went wrong — namely, Ireland, when a famine that was completely foreseeable occurred despite there being ample warnings.

The Great Famine of 1845 to 1852 occurred due to a brutal combination of economic and ecological injustices perpetrated by Ireland's English conquerors. On the economic side, English and Anglo-Irish landlords and middlemen (people tasked to collect rent) controlled the island's land and wealth, leaving the Catholic common folk in abject poverty. Their ability to control land was so limited that they had to rely on potatoes for food, since those could be grown cheaply, abundantly and in lower quality land. More than 175 government panels of various kinds warned that the economic system in Ireland was unsustainable, as millions were already suffering through starvation and ill-health and the slightest breeze of bad luck could knock down the whole house of cards.

That figurative breeze finally came in 1845 in the form of Phytophthora infestans, a fungus-like organism that demolished potato crops throughout Ireland. Ruining up to one-half of the potato crop in 1845 and three-quarters over the following seven years, the Great Famine ultimately led to at least 1 million deaths and the emigration of at least another 1 million souls (many of them to America). England implemented some half-measures in a semi-sincere attempt to alleviate the misery — they repealed laws that made staple foods like bread and corn prohibitively expensive, for example — but refused to check the avarice of the elites. The Irish working class was still forced to produce foods like beans, peas, honey and rabbits that were exported to other countries (in some cases, like with butter and livestock, exports may have increased). Economic elites still were allowed to exploit the Irish working class in a number of ways. The mere concept of widespread wealth redistribution, which alone could create economic justice and responsible land management, was never seriously considered.

Ireland therefore stands mainly as an object lesson in the danger of letting special interests dictate policy, particularly when experts can foresee adverse consequences. The powers controlling Ireland had every reason to know that disaster was afoot but, because they did not value Irish lives, failed to avert a humanitarian catastrophe. Business logic prevailed over plain old logic.

It doesn't help that, unlike the Irish of the mid-19th century, Earthlings in the early-21st don't have the option of emigrating.

The Netherlands presents us with a more hopeful example of a civilization facing an existential threat and dealing with it. As far back as the days of the Roman Empire, the area now known as the Netherlands was notorious for its intense flooding because of its low elevation. Observers and inhabitants alike knew that if the region was to be populated, the flooding would have to be controlled.

Thus, by the later half of the first millennium AD, the inhabitants of the Netherlands had already begun to construct rudimentary dikes. Dike construction picked up in earnest around the start of the second millennium, and by the 13th century most of the dikes had been linked to each other so an ongoing sea defense system could exist. Dutch officials even created local water boards around this time in order to maintain the dikes.

Crucially, Dutch politicians continued to work together over the years to maintain their dikes, with most major political institutions in the country recognizing that their very survival depends on them. In 1953, when the sea level on the Dutch coast rose so high that flooding destroyed millions of dollars in property and caused 1,835 deaths in the Netherlands (as well as 307 in England), the government quickly created a so-called "Delta Commission." The panel came back with a suggestion that the country create an elaborate infrastructure of dikes, dams, storm barriers and sluices so that future catastrophic flooding will not occur. As a result, no one in the Netherlands has been killed by a flood since the 1953 disaster.

There are several valuable lessons to be found in the Dutch example. First, there is a willingness by all sides to overlook their differences when it comes to matters that literally mean life or death for their civilization. Second, there is a pragmatic approach to problem-solving that is gradual when necessary and drastic when necessary, emphasizing state-of-the-art knowledge over any particular philosophical approach. Lastly, of course, is the fact that governing authorities listened to scientific experts (or, if we're talking about the medieval era, their equivalents). This not only saved lives, but protected Dutch civilization and allowed it to become a modern empire — which, ironically, is now implicated in the global capitalist order that is hastening carbon emissions.

There is also a contested example of a civilization collapsing which, though contested, has many lessons for our modern predicament: that of Easter Island. In his 2005 book "Collapse: How Societies Choose to Fail or Succeed" (which built on the work of other scholars tracing back to the 1970s), biologist Jared Diamond posited that the Rapa Nui people on Easter Island (which is also known as Rapa Nui) saw their civilization collapse because their population grew too large and they overused the island's limited resources. In particular, Diamond notes that they over-harvested the wood that was used to construct moai, or large statues of forefathers that owners used to flaunt their wealth and status. The loss of trees supposedly led to soil erosion, however, making it difficult to grow food in a society that (without wood) people could not leave. The end result, Diamond argues, was cannibalism, warfare and a major population decline.

If true, Diamond's hypothesis would have obvious implications for global warming: a society engaged in deforestation which led to a concomitant collapse in the surrounding ecosystem, causing a food shortage. This happened in a closed system, an island, that was difficult to emigrate from.

Yet not everyone agrees with Diamond's theory. Speaking to Salon by email, scholars Robert DiNapoli, Terry L. Hunt, Carl P. Lipo and Timothy Rieth argue that the archaeological record does not support Diamond's hypothesis. Rather, they believe that the evidence suggests a "population that arrived on the island ca. 1200 AD, grew to a size that was supported by the resources available on the island, and live in communities that drew benefits from monument construction." They argue that these communities were sustainable for more than 500 years.

The "Rapa Nui people were able to adapt to their local environments and live successfully despite the island's inherent constraints (size, remote location, few natural resources, etc.)," the scholars said.

In this narrative, what upset the balance on Rapa Nui was, quite simply, European colonialists. They performed slave raids which took thousands of people off the island, brought diseases with them, and devastated the island's environment. (For 50 years, the island was managed as a sheep ranch through a foreign corporation.) All of these factors spread needless suffering and misery to the Rapa Nui and cost incalculable lives. Yet in spite of this, the Rapa Nui people survived, and today more than 5,000 live on the island, speak their ancestral language and practice their native culture. Those moai, maligned as an unnecessary waste of resources by Diamond, may have even helped, since they brought communities together.

"The very thing that people have said was the 'downfall' of Rapa Nui society is almost certainly a key part of their success," the scholars told Salon.

The lesson of the Rapa Nui is not so simple. Yet their plight speaks to the importance of monuments and other cultural artifacts in civilizations — keystones that help civilizations survive in the face of external threats, whether imperialism, greed or climate change.