"Shang-Chi" crafted a fantastic, badass fighter – too bad the movie was all about her brother

Marvel has a gender problem, especially with women of color, and that's conspicuous in the latest MCU offering 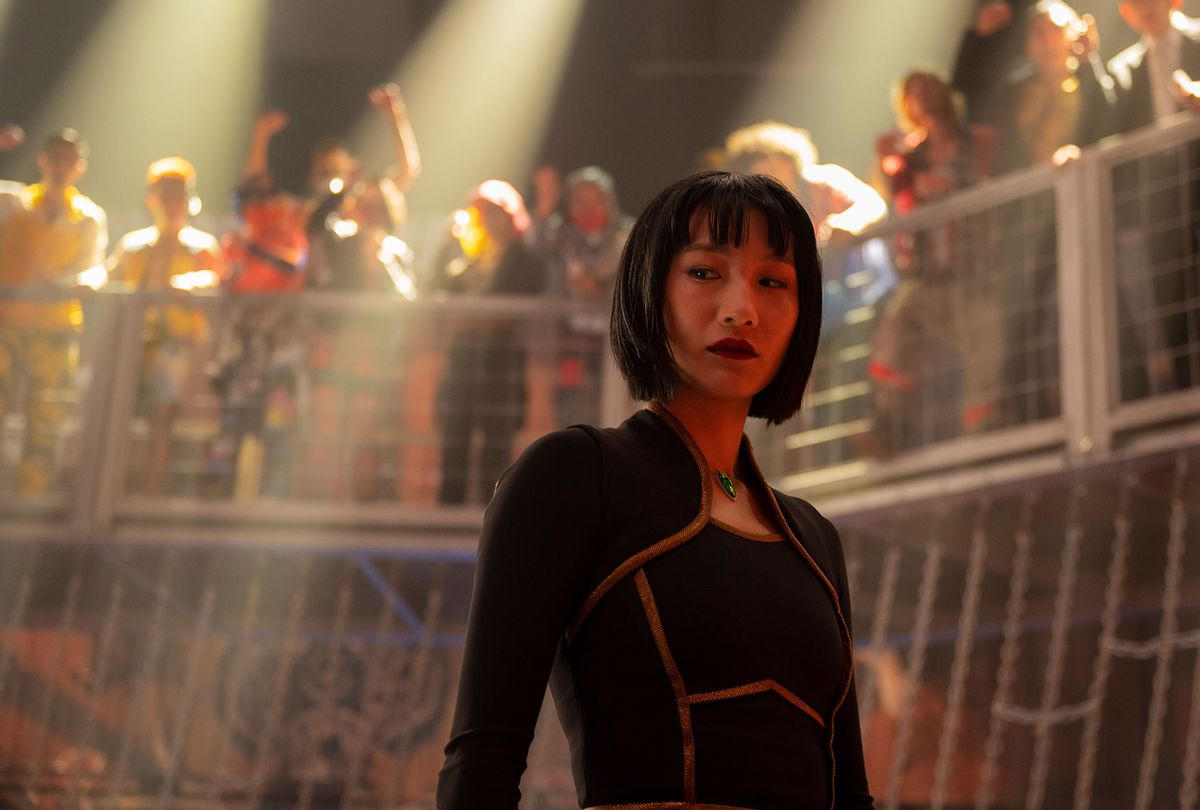 The following contains spoilers for "Shang-Chi and the Legend of the Ten Rings," including the end credits bonus scene.

For decades, the superhero genre hasn't exactly been big on feminist overtures, saturated with male leads and the occasional, one-off, bikini-clad female sidekick. Of course, from Patty Jenkins' "Wonder Woman" to the Marvel Cinematic Universe's "Captain Marvel" and recent "Black Widow," times are changing. Women are becoming the leads of superhero movies — not to mention mighty and iconic superheroes in their own right. Still, the numbers speak for themselves: Out of some 25 MCU movies, just two center female leads.

Enter "Shang-Chi and the Legend of the Ten Rings."

This latest contribution to the MCU features its first ever Asian-American superhero, starring the Canadian Simu Liu as the martial arts master Shang-Chi. The movie feels like a glorious representational triumph for Asian audiences, who are used to being relegated to the role of nerdy superhero sidekick, at best, until now. But by shattering this barrier with a male Asian superhero, the presence of numerous iconic Asian women in Shang's life raises questions of why they remain grounded as tertiary characters, just along for his ride.

Although Awkwafina has more big screen experience, she's relegated to playing Shang's best friend Katy, a glorified sidekick mainly there for comic relief, eventually learning to wield a bow and arrow. But it's Shang's long-lost sister Xialing (Meng'er Zhang) who feels cheated of the attention and respect she's due the most in the film. As the siblings team up to stop their father Wenwu (Tony Leung) from his plan to unleash an ancient darkness on the world, the audience comes to realize that it's Xialing's journey that is arguably far more intriguing, not to mention challenging than Shang's.

When Shang initially reconnects with his estranged sister, presumably to "protect" her from their father's men, he finds she's anything but helpless. In the years after being abandoned by her older brother, Xialing is running a wildly popular underground fighting ring, where she remains undefeated. Later, she reveals that she built it from the ground up at just 16, after running away from their father's clandestine Ten Rings compound. Because the Ten Rings only trained boys and refused to train Xialing, she taught herself, and assembled the fighting ring on her own.

So to recap: While Shang had all the advantages – formal training and the attention of his father – growing up, he ended up hiding out in the United States and became a valet. Meanwhile, Xialing achieved everything on her own, from her fighting prowess to her leadership and entrepreneurship. One only has to see who commands the most respect onscreen to realize that perhaps the audience is being told to pay attention to the wrong sibling.

Throughout the movie, Xialing's graceful and deadly fighting skills, and her irreverence for the sexist customs meant to disempower her, are simultaneously enthralling and frustrating. Why is this not "Xialing and the Legend of the Ten Rings" again?

Of course, such a demand from a movie featuring the first Asian superhero — that it also be a triumph for gender representation, too — might seem selfish, or like "asking for too much." But the movie's emphasis on the sexist barriers that have shaped Xialing's life explicitly highlight that Asian men and Asian women can have vastly different experiences. They, and all women of color, can also have vastly different experiences from white women, meaning the leading ladies of "Captain Marvel" and "Black Widow" may not particularly resonate for some audiences.

"Shang-Chi" is overall a tremendous step forward for the MCU. Yet, the relegation of Xialing to be an accompanying act, while being more compelling than her brother, the star, feels like a step backward. Right after the explicitly feminist heroics of the long overdue solo film "Black Widow," watching badass, riveting female heroes assume peripheral roles feels like a callback to 2010's "Iron Man 2," when Natasha Romanoff (Scarlett Johansson) first entered the scene not as an Avenger, but a deadly if not hypersexualized secret agent with an unseen origin story that fans spent more than a decade waiting for.

Marvel's growing roster of well-beloved, fearsome, female characters of color is undeniably exciting. Before Xialing, there were the women warriors of Wakanda, called the Dora Milaje. They first appeared in "Black Panther" but have since stolen the show as heroes of "Avengers: Infinity War" and "The Falcon and the Winter Soldier." Under Okoye's (Danai Gurira) leadership, Ayo (Florence Kasumba), Nomble (Janeshia Adams-Ginyard), Yama (Zola Williams) and others are the most formidable soldiers in Wakanda.

"Black Panther" also introduces us to Shuri (Letitia Wright), King T'Challa's (Chadwick Boseman) sister and a genius scientist more inventive than Tony Stark and Bruce Banner, and Nakia (Lupita Nyong'o), a superspy and elite warrior who's infinitely more than T'Challa's lover. In "Thor: Ragnarok," we meet the fan-favorite Valkyrie (Tessa Thompson), a drunken, bisexual, pegasus-riding elite warrior, who also plays a memorable role in "Endgame." Beyond Valkyrie and the women of "Black Panther," other female characters of color are sprinkled here and there, and by the end of "Black Widow," the worldwide, notably diverse force of Widows are finally liberated.

These characters prove Marvel knows how to write and bring to life interesting women of color — that's why it's so frustrating they remain confined to the role of sidekicks. As we watch these characters repeatedly return to our screens and steal the show each time, you have to wonder if women of color are more or less being written in as experiments, who could — like Black Widow — someday earn their own solo projects if they become popular enough. One can't help notice, however, that Thor, Captain America and Iron Man didn't have to weather such audition processes to be rewarded with not just their own one-off solo films, but their own solo trilogies.

Speaking of "experiment," that's the precise word used by Disney CEO Bob Chapek to refer to the exclusive theatrical release of "Shang-Chi" amid the pandemic (i.e. not a simultaneous streaming release like "Black Widow" received). "Eternals" and subsequent Marvel release dates later this year could reportedly be delayed or otherwise adjusted, pending the box office outcome of "Shang-Chi." Simu Liu, who's had a lot to say about media representation for Asian communities, has since criticized Chapek's comments, saying, "We are not an experiment. We are the underdog; the underestimated. We are the ceiling-breakers. We are the celebration of culture and joy that will persevere after an embattled year."

Liu isn't wrong. All Hollywood projects that seemingly go against the grain, or present non-white or non-male leads, are frustratingly treated as referendums on whether any and all projects like this have value, whether stars of color or women superheroes are worth investing in for future projects. But on some level, all Marvel films featuring dynamic yet ultimately tertiary female characters, and especially those of color, are experiments, to gauge whether these characters are worth investing in.

Of course, "Shang-Chi" wouldn't be a Marvel movie without a couple of bonus scenes during the end credits, and the second one in particular could offer justice for Xialing. After the final battle in which her father dies, Xialing is seen packing up her childhood bedroom that's situated on the grounds of the Ten Rings compound. But it's soon revealed that she's taken over her father's allies and brought on her fighting ring employees to continue the Ten Rings training . . . but for young girls and women.

From one perspective, this could be promising. Xialing could create a formidible army to help fight off whatever big bad is coming in Phase 4, making her an essential force in the battle ahead. But then again, Marvel could be setting her up to oppose her brother, dipping back into that old tired well. And even worse, no matter what her role is next, she could still just end up being a kickass prop to some guy who gets all the glory and his name in the movie title.

Marvel's women and especially women of color should be more than just the cool, badass sidekicks to male heroes. And they should be more than an experiment. The MCU boasts one of the most active and diverse fandoms in the world, and they deserve to see themselves front and center in the movies they love; they deserve solo films and trilogies for Shuri, Xialing, Valkyrie, and more new, diverse characters. These onscreen characters aren't an experiment — and neither are fans.