Taryn Manning: "I don't want to keep playing characters that pass away" 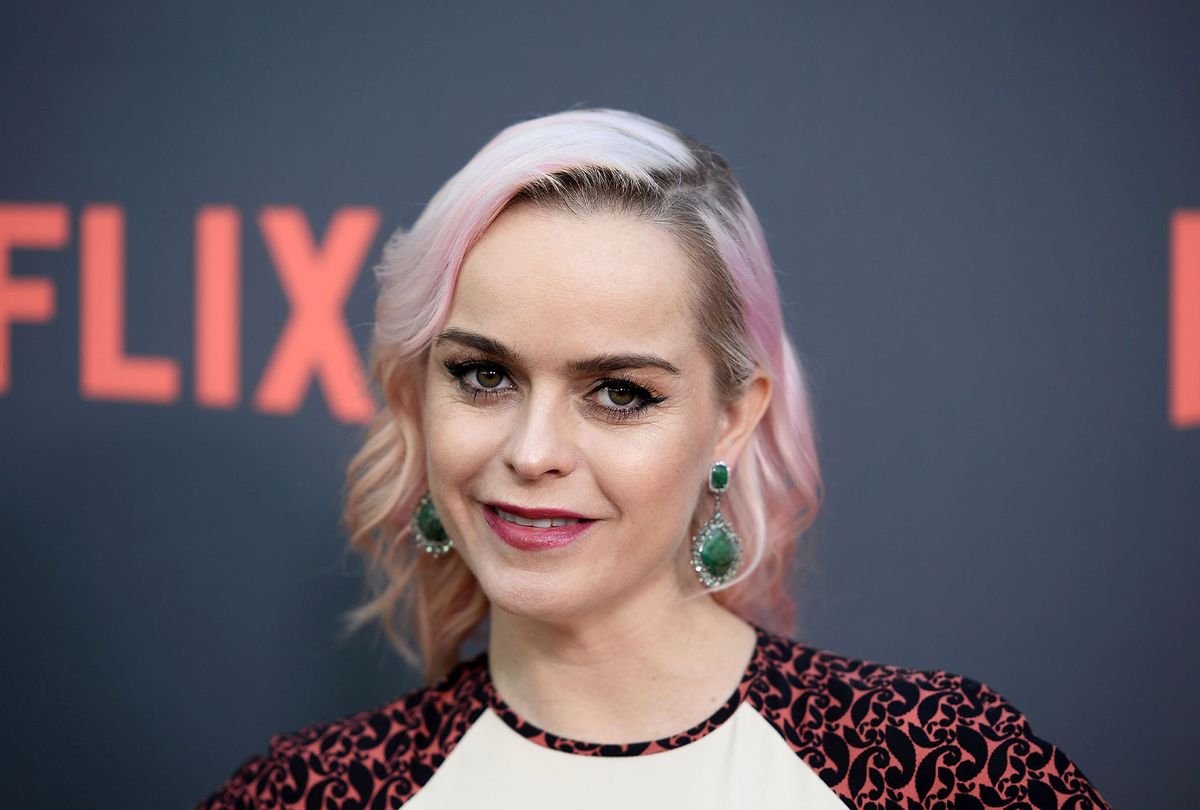 Taryn Manning didn't set out to make you cry so much. Though she's known for her gritty dramatic work in "8 Mile", "Hustle & Flow," "Sons of Anarchy" and, most famously, as Pennsatucky on "Orange is the New Black.""

Offscreen, she's a dancer and musician who say'd love to do more comedy. "I don't know why these parts find me," she told me recently on "Salon Talks."

She may have to wait a little longer for that rom-com recognition. In the action thriller "Every Last One of the Them," she costars with Richard Dreyfuss and Michael Madsen as the pie-baking, gun-toting half of a brother-sister security firm with some deadly connections.

Watch the full episode of "Salon Talks " here or read a Q&A of our conversation below to hear more about how "Orange Is the New Black" changed her as an actor, who it was working with Brittany Murphy on "8 Mile" and why she's ready "to play something a little more lighthearted."

This is such an interesting film. It goes in directions that are completely unexpected. You think you know where it's going to go and it's not. You play a character named Maggie. Tell me who Maggie is.

Maggie is a twisted Suzy homemaker. She just wants to keep the peace, really just wants a peaceful life. But she would do anything for her brother, anything, whatever it takes to protect him or protect their firm. They own a security firm. She's pretty savage, it turns out. I like her because you wouldn't really know that she has that in her, and then she blows you away with her skills.

I figure both of [the siblings] had a lot of training in this way. That's why they opened up this business together. They're on the up and up, but they're the biggest security firm in the desert, so they're in on stuff. They may or may not be a little corrupt. You really don't know what's going to happen. It really does take you on a wild ride. You don't know who's the good guys or who's the bad guys.

This is a story where you have an intense, strong bond with your brother. The whole dynamic is you and your family, and family comes first. Of course, you have been in business with your own brother. You were in a band for a long time. I was wondering how much of that experience of being in the family business did you bring to this role?

It's an interesting question, because I tell people I love this role because of that. There's one thing I can relate to, and that's having an older brother that basically everybody always said, "So who's the older one?" I definitely was the one that handled stuff like that. Every picture of us growing up, I'm just wrapped around him. I couldn't get enough of him. I used to have to pay him to hang out in his bedroom, 10 cents or 25 cents, anything just to be around him. I can relate to that love. I always say there are parents, but when it comes to siblings, it's like we're all one, we're all in. The bond between siblings can either be so strong, or when it's not, it's so painful. It's like a piece of you is missing. Kellen and I, writing songs together, touring together, it's also really hard to do, by the way, to work with your brother so closely. But I did relate to that aspect.

Because for Maggie, her brother is her whole world.

And they're two of the same mind. Usually there's someone that maybe is the voice of reason, but I like them because they're just partners. They're equals.

You're in so many other things right now. You've had four movies come out this year, and then you were also part of the Brittany Murphy documentary. I wanted to ask you about that and about participating in it, because she is having this rediscovery now so many years after her death. The things that you say about her in this film are just so lovely. What made you want to become part of this?

That was tough, because so many of her very good friends, day in and day out friends, didn't want to be in it. I could understand; it's so painful. Honestly, there's not one ill word you can speak about the girl. What you saw in that documentary, you got a sense of her light, the beacon that she is. I just felt she touched me in such a way that I've never experienced. That's, just a complete stranger coming to my trailer and an actress I looked up to, writing me a three-page letter about how grateful she was that I was there. [Manning and Murphy costarred in "8 Mile."] There wasn't even a word repeated. It was like she's known me for years, and that's how she embraced everything. She deserves any type of praise, because I just feel what happened with her is just so unfortunate, and doesn't make sense really.

RELATED: "Your worst nightmare is to lose your child": Amy Ryan on her Netflix film "Lost Girls"

You've done so many films, but obviously you did seven seasons of "Orange is the New Black." To have this character change and have people get to know her and and care for her, what did that change about you as an actor? How did that inform what you're doing now?

I really loved the arc, because I felt seen as an actor and also as a character. She really thought that she was just tough as nails, but a lot of times it just goes to show you that a lot of bullies and a lot of people that act like this, they really are hurt people. If you just show them, basically give them a taste of their own medicine, and then maybe embrace them, or just not put up with their stuff, you can turn lives around.

I've always wondered about her. Was she truly religious? Was she just spitting out things because she was completely sponsored through prison by default, because she happened to do what she did when a bunch of Christians were picketing outside? You always just wonder, who is this girl? It's like she had this run of good luck, but at the same time, not really worthy of any type of religious sort of grace, if you will, because everything about her was just anti.

But I really loved her. I tried not to judge her too much. It was very hard to play that. A lot of times I felt really bad inside as Taryn. I remember probably the first time I ever went truly Method where I just had to just completely remove any type of judgment, like I said, or any trace of me, just so I could get through it. I love when they made her a little bit nicer. It was like, whew, because that stuff can wear on you after time. Then when you say it, you're sincere in your acting. People, even your own castmates don't know if you're serious or not. "Guys, come on. It's me."

You've done so many interesting projects where you are cast as that character who is dark, who's controversial, who's not necessarily the most sympathetic person in the storyline. What is it about those roles that either you are drawn to, or are drawn to you? This character, Maggie, is a tough lady, I imagine to come home with at night.

Right. But at the same time, though, she's not, as far as we know, suicidal or on drugs. It's some just horrible tragedy. She's not really to me, a victim. I don't know why these parts find me. It's funny, because when I was younger, I used to fight against it so much, and I said, "No, no, no, I want to play the girl next door. Aren't I somewhat pretty or cute?" It never worked. Once I said, "No," it never worked. I'm like, "Oh, man. Okay, let's go back to the drawing board." Basically at the end of the day, as I've gotten older, I can't do it anymore.

I remember the last time I died of an overdose for the ninth time or committed suicide for the 20th time, I'm like, "You know what? I want to live. I want to live. This is ridiculous." I don't want to keep playing characters that pass away or that they're going through so much. My life's so full and so rich, and I've traveled the world. I'm a lot more well read than people know. I've just had to say no to paychecks, because I just can't do it anymore. I can't, because how does the universe know whether we're acting or not acting when you're putting your whole heart into it? It's a frequency you're putting out. The way I go in, it's like, art imitates life. God forbid, I don't want any of that to happen.

Rome wasn't built overnight, and I'm appreciative for my life and my career. But I would love to see, rather than playing the mental patient, I'd rather play the counselor at the mental ward. I'm not too far out of my stereotype. People will still accept me in that, but I'm just tired of playing the down and out one.

And you've really done such a diverse spread of roles just over the past year, like doing "Last Call" with Jeremy Piven. That's a very different role for you, and it's interesting seeing you in these different lights. I've heard you say that you want to do full-blown comedy.

I wrote and directed a web series that's a comedy. I love to have fun. Comedy timing is hard. That's serious training when I get back into that. Yeah, I would love to do something lighthearted. With everything so serious and dismal, it'd be nice to play something a little more lighthearted and laughing, perhaps.

Speaking of things that are a little more lighthearted, I heard you in one interview describe yourself as a working actor and a struggling musician. Now that your career is really so much focused on acting, how do you nourish that side of yourself and your career?

It's not so much. Because I was signed to Dreamworks, there was a time where it was all about getting signed again. Just my focus was wrong. I play guitar. I can play instruments. I just do it now just because I have to because it's an outlet. Most of my friends that know me well, or anybody that knows me at all, knows that that's my life, music and going to concerts. I mean, I love acting, don't get me wrong. It's amazing. It's just with music, when you write your own lyrics and melodies, it's just so fulfilling, especially when you can be in Japan where there's a complete language barrier, but they're singing all your words back. There's nothing more exciting than touring and traveling. Those days were amazing, and all that's amazing. It's just a part of me, and I love it. It's true, I'm a working actress, struggling musician.