Want to make a fresh and festive Thanksgiving dinner for $40? Here's your menu 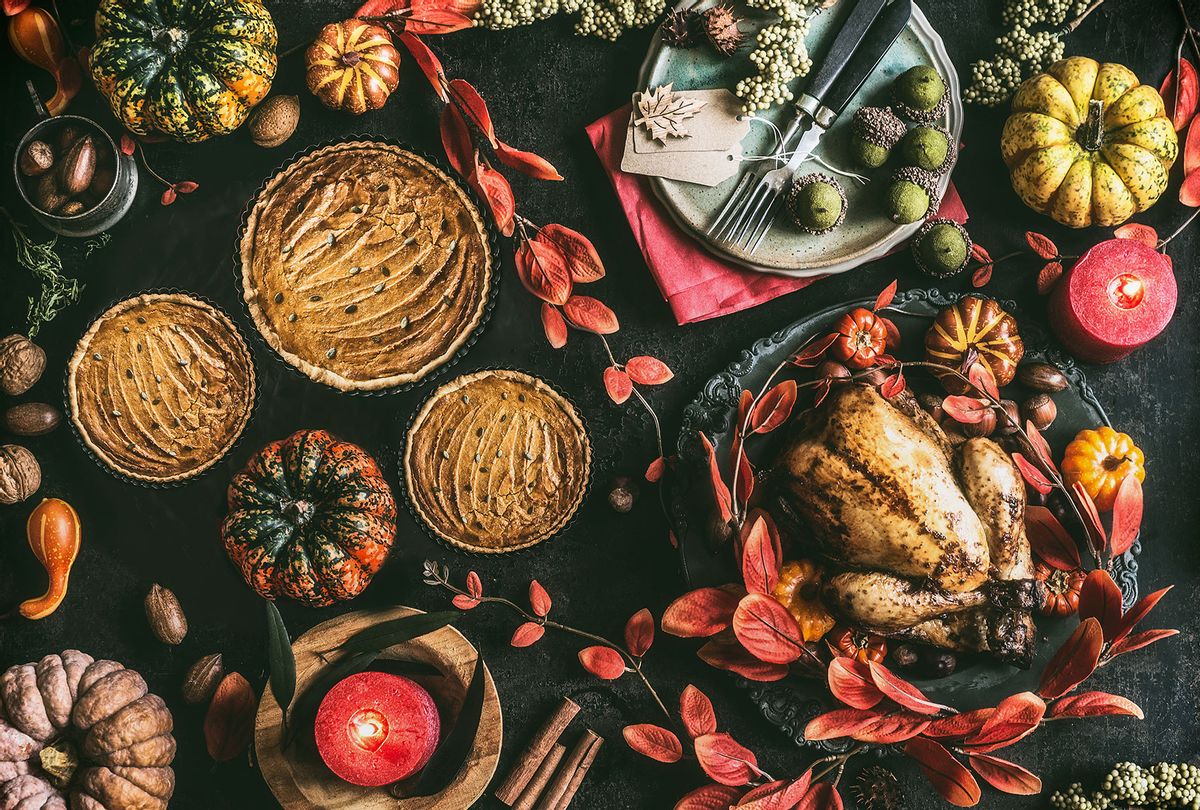 Last weekend, I stood on the second-floor balcony of Gene's Sausage Shop and Delicatessen, a European-influenced market in Chicago's Lincoln Square, sampling gin while peering into the fray below. It was Saturday afternoon, and the aisles were packed with people and with products — loaves of crusty bread and springy pretzel rolls, tidy rows of neon bottled limoncello, a dazzling array of sausages ranging in color from muted brown duck sausage to delicate pink pork to fire-red Spanish chorizo.

Amid it all was a woman with whom I felt an immediate kinship. In her shopping basket was a notebook, a spreadsheet and a pocket calculator. As she made her way through the store, occasionally pushing wisps of sandy brown hair back up under a sunshine-colored toboggan, she'd grab an item, consult her spreadsheet and note the price.

The shopper continued like this until her basket was filled with polenta, a hunk of good Parm, leafy escarole, a massive pork loin and miniature plastic sachets of herbs. On her way to check-out, she grabbed a few bottles of wine, some dried apricots, a bouquet of orange marigolds dotted with white miniature roses and a cheesecake.

Related: 9 ideas for what to do with Thanksgiving leftovers, Salon-style

That, I thought, is definitely a woman preparing for a dinner party.

For at least two decades, "effortless" has become the platonic ideal of entertaining. At the center of it all is the host or hostess with a certain "I just threw some things together" breeziness. But if the explosion of food media has shown us anything — with cookbooks and articles titled "Entertaining Made Easy" and "The Perfect 'I'm Having People Over, No Big Deal' Dinner Menu" — effortlessness is often a construct.

Pulling off a celebratory meal for a group takes a fair amount of planning and time, especially if you're on a budget. This is exceptionally true if it's the holidays.

That's why I was delighted to receive this question from a reader named Carl who lives in Austin: "Hi, Salon Food team! What Thanksgiving menu would you put together for a family of four for $40? What about $400?"

So, I grabbed my notebook and pocket calculator — well, smartphone calculator app — and got to work. Let's start with the $40 Thanksgiving.

Not to brag, but I'm a master of cooking well on a budget. Need someone to zhush up 99-cent ramen noodles or a 45-cent bag of black beans? I'm your girl. (For more on this, check out this week's edition of The Bite, the Salon Food newsletter, in which I discuss my "Great Pantry Clean Out.")

In the case of cooking a budget Thanksgiving, the key question to ask yourself is this: What do I actually need to include so it feels like a holiday? The answer will vary depending on you and your family, of course, but for me that includes some kind of poultry and stuffing, a seasonal vegetable, sweet potatoes and cranberries. Everything else is gravy, pardon the pun.

On that note: Do I like mashed potatoes and gravy? I love them, actually, but I guess I've lived in the south long enough that they've become a fixture on Sunday supper plates, so I don't necessarily feel compelled to make room in the budget for them here. Rolls would be nice, but they're similar enough to stuffing.

The thing about Thanksgiving is that you can end up blowing your entire budget on a turkey — especially if you go the never-frozen, heritage breed route, which we'll discuss a little later in the $400 Thanksgiving menu. If you're dedicated to serving it for Thanksgiving dinner, then there's always the turkey breast route, which is cheaper than the full bird. However, I'm not a Thanksgiving purist, and when pricing poultry options, I was delighted to find a pair of frozen Cornish game hens for $9.22. Combined, they came out to two pounds, which is plenty of meat for a group of four, and I liked the presentation opportunities.

After placing the hens in the refrigerator to thaw overnight, I began the stuffing-making process. Here, I reached for a shortcut that's both a time and money-saver: Jiffy-brand cornbread mix. One 50-cent box, when mixed with an egg and a splash of milk, produces six large cornbread muffins. I baked those up, tore them into nice craggy pieces and let them rest on a baking sheet overnight. The next morning, I finished prep work for the dish.

To flavor the hens, we're going to cover them with butter flavored with lemon zest, a few cloves of garlic and sage; the sage comes from a $1.99 fresh poultry herb blend, which many supermarkets sell this time of year. It comes packed with sage, rosemary and thyme. Reserve the latter two herbs for the stuffing.

To make the flavored butter, grab a stick of unsalted butter and place 6 tablespoons in a blender or food processor. You'll use the remaining 2 tablespoons for the stuffing. Toss in the zest of one whole lemon and the sage, and pulse until the butter is smooth and completely combined. After salting and peppering your hens, slather the mixture under the skin of the birds, making sure to really get into all the nooks and crannies. Place the hens in a large, prepared cast-iron skillet and set aside.

Now for the stuffing: Place the cornbread pieces in a large bowl. Finely chop a shallot, a carrot, maybe another clove or two of garlic for good measure and the remaining rosemary and thyme. Add to the bowl of cornbread along with the remaining 2 tablespoons of butter, which have been melted. Stir to combine, and season with salt and pepper to taste. You can either divide the mixture among the two birds, filling the center cavities with stuffing, or simply arrange it around the game hens (I guess thus rendering it "dressing").

One error I've committed when hosting Thanksgivings-past is putting out a spread of entirely brown dishes, with maybe a pop of  burnt-orange or red for good measure. Treat Thanksgiving like you would any dinner party, and include something bright and fresh for a little taste and textural contrast. In this case, I opted for a salad of shaved Brussels sprouts, dotted with delicate, fatty prosciutto and punchy crumbled white cheddar.

Remember the lemon we zested for our cornish game hens? You're going to use the juice from it to whip up a super simple vinaigrette by whisking it with some good olive oil and salt and pepper.

I love sweet potato casserole. There's a weird, longstanding rift in my family that emerges every year over whether oatmeal belongs on it as a topping — but my mother votes "no" and opts for a spiced pecan crumble. I'm with her, so I made a version for a smaller crowd.

Slice open the sweet potatoes and bake on 350 degrees until tender, about 45 minutes. Meanwhile, put 4 tablespoons of pecan pieces, 1 tablespoon of honey and the juice of one orange in a small saucepan. Stir over medium-low heat until the pecans are completely coated and the orange juice and honey mixture has reduced. Set aside.

Place the potatoes back in the 350-degree oven for about 10 minutes and serve.

This play on a trifle gets some major help from supermarket angel food cake. Slice it into several layers, and place it in a small trifle dish layered with a simple icing made with cream cheese, the remainder of the heavy whipping cream and a few teaspoons of powdered sugar and cranberry sauce made by reducing a pound of fresh cranberries, 1 cup of water and 1 tablespoon of water until thickened. Top the trifle with the zest of the orange leftover from the sweet potatoes.

Here is the cost breakdown:

Finally, sparkling cider is a celebratory beverage that's great for toasting but won't break your budget. If you feel like the meal needs alcohol to be complete (it doesn't), someone will inevitably ask if they can bring something. Tell them to BYOB!

So, there you have it, folks: a festive, fresh Thanksgiving meal for four for less than $40! With a little planning, it's totally doable. And, honestly, the planning is half the fun. To get the answer to the second part of Carl's question — what would a menu for four for $400 look like? — be sure to sign up for "The Bite," Salon Food's weekly food newsletter.

If you have any Thanksgiving-themed questions, feel free to drop us a line at food@salon.com.

More of our favorite holiday dishes: