Have we forgotten the entire "Captain America" trilogy, people? 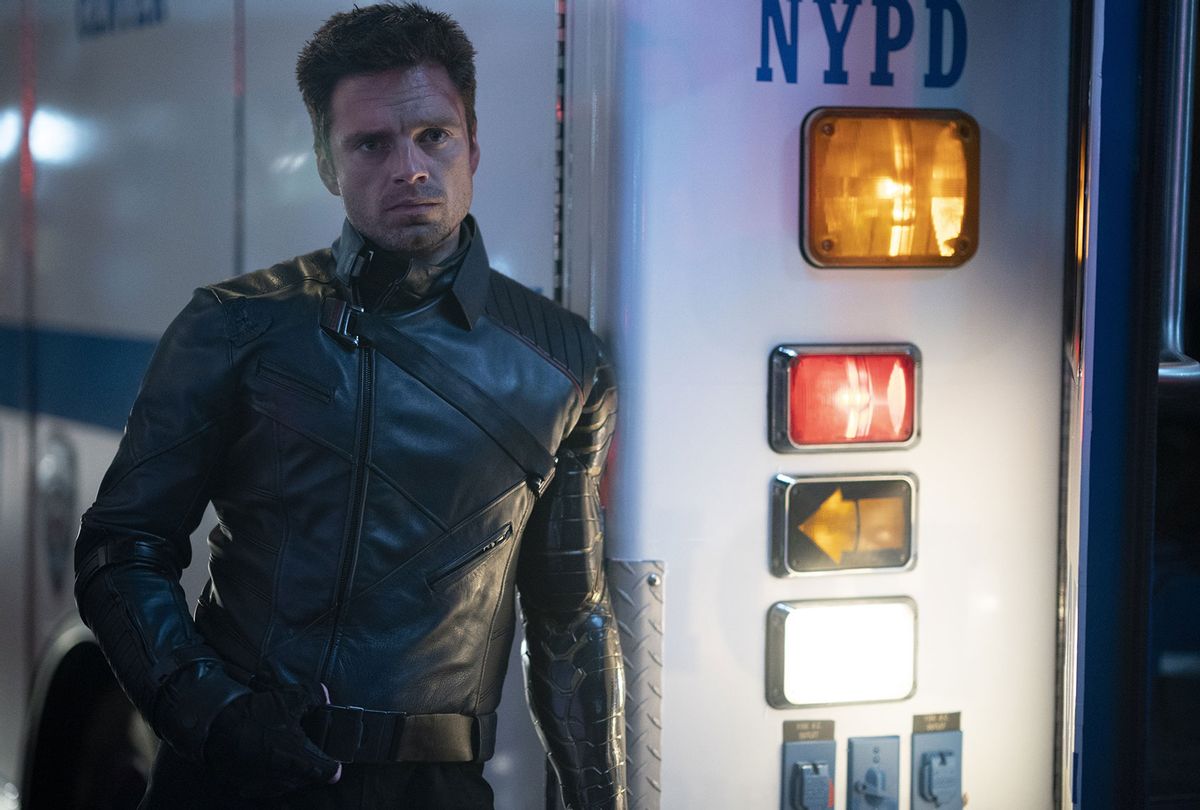 The following contains spoilers for "Eternals" and the "Captain America" films.

Much has been made of "Eternals" being a "different" kind of Marvel movie, and in many ways, it is.

The Chloé Zhao-directed film follows ancient, supernatural beings who've defended Earth from creatures called Deviants for millennia and who reunite in the present day to save humanity from the latest catastrophe. Because of this long view of mankind's development, "Eternals" has been touted as a "love letter to Earth and humanity," as Angelina Jolie, who plays the Eternal Thena, has put it.

But producer Nate Moore also calls it "the first movie that's really built around a romance as the central relationship." In the film, Richard Madden's Ikaris and Gemma Chan's Sersi, two of the most powerful of the 10 Eternals have a love story that spans thousands of years, which is certainly a focal point from start to finish.

This is not to say that other MCU films have lacked in some romantic content. Moore acknowledges the love stories of Tony Stark (Robert Downey Jr.) and Pepper Potts (Gwyneth Paltrow); Steve Rogers (Chris Evans) and Peggy Carter (Hayley Atwell), a relationship that Steve gave up everything for in the final moments of "Endgame"; and the unnecessary romantic subplot between Natasha Romanoff (Scarlett Johansson) and Bruce Banner (Mark Ruffalo). But Moore makes the case for why, unlike these other romances, Ikaris and Sersi's love is the foundation of "Eternals," making the movie arguably not just an action film, but a romance, supposedly for the first time ever in the MCU.

Let's rewind for a minute, here. The year is 2011. "Captain America: The First Avenger" has just hit theaters, and we watch as Steve Rogers rescues his childhood best friend Bucky Barnes from Nazi captivity, followed by a glorious montage of the two supposedly platonic besties going Nazi-hunting in the 1940s at the height of World War II. All of this is cut short when Bucky appears to fall off the top of a train to his death on a mission, devastating Steve. By the end of "The First Avenger," both Steve and Bucky are presumed to be dead, as Steve sacrifices his life to save humanity from the overwhelming power of the Tesseract. Of course, in the final moments of the movie, we learn Steve survived and is discovered frozen in ice 70 years later, in the present day.

But Steve isn't the only one who survived, and he certainly isn't the only biologically enhanced super soldier. As 2014's "Captain America: The Winter Soldier" — widely lauded as one of the all-time greatest Marvel movies — reveals, Bucky is alive too, recovered by the Nazi scientists of Hydra who made him into a super soldier and preserved him over the past 70 years through freezing him in cryogenic sleep. Steve and Bucky's lives are inextricably bound, forever intertwined through what can only be described as fate. Decades, lifetimes, wars, Nazis, mind control — nothing can separate the two.

RELATED: Marvel finally adds a gay title hero in "Eternals," only to have film banned in some countries

In many ways, Steve and Bucky's relationship directly parallels Ikaris and Sersi's, and "The Winter Soldier" came out nearly a decade before "Eternals." Just as Ikaris and Sersi are bonded by their immortality, their love spanning thousands of years, Steve and Bucky are also bonded by their uniquely long life spans, owing to being frozen for decades in the Arctic Ocean for Steve, and being frozen in cryogenic sleep by Nazi scientists for Bucky.

In these two relationships, we see both couples at different points divided by opposing missions. For Ikaris and Sersi, this manifests in the final act of "Eternals," when it's revealed that Ikaris will do anything to carry out the Eternals' mission, meaning sacrificing Earth to allow for the birth of a new Celestial (aka a giant, ultra-powerful, intergalactic being). Sersi, on the other hand, is determined to stop the so-called convergence and protect Earth and humanity at any cost.

As for Steve and Bucky, much of "The Winter Soldier" follows Bucky hunting down his former best friend while under mind control by Hydra, which survived World War II by secretly merging into SHIELD, the agency that governs the Avengers. Throughout most of the movie, Bucky's face is masked until the two nearly fight to the death, causing the mask to fall and reveal Bucky's identity. Steve then realizes that the Winter Soldier — the mysterious Hydra assassin who's killed untold numbers of innocent people, and appears to have killed Nick Fury (Samuel L. Jackson) earlier in "The Winter Soldier" — is his childhood best friend.

One particular memory of Bucky stands out to Steve, after this revelation: the day of his parents' funeral in the 1940s. When Steve repeatedly rejected Bucky's offers for help all those years ago, Bucky leaned in close to tell him, "I'm with you 'til the end of the line, pal." In the final minutes of "The Winter Soldier," Steve repeats these words to Bucky just before Bucky nearly kills him while under mind control by Hydra. The words — and the enduring love between the two — are enough to liberate Bucky from decades of mind control and brainwashing. He frees Steve and is simultaneously freed too, beginning to regain a sense of self through Steve's words for the first time in nearly 70 years. The two fall from an exploding helicarrier into the Potomac, and Bucky saves an unconscious Steve's life before fleeing the scene.

This is perhaps where "Steve x Bucky" and "Ikaris x Sersi" differ most: Steve and Bucky's bond is unbreakable, while Ikaris and Sersi's has conditions. Where Ikaris' great "sacrifice" for Sersi at the end of "Eternals" is sparing her life, Steve and Bucky have both repeatedly proven their willingness to die for each other, to buck any and all of their duties and allegiances for each other, as the aforementioned, final moments of "The Winter Soldier" show. True to their own words to each other, Steve and Bucky are together "'til the end of the line." Meanwhile, in "Eternals," we're supposed to see it as a romantic gesture that Ikaris opts to not kill Sersi with his lethal laser beams and flies into the sun instead. How . . . romantic?

Also, it's revealed early in "Eternals" that Ikaris and Sersi broke up after he essentially ghosted her, vanishing from her life for hundreds of years. We learn that this is because Ikaris had to keep the secret of the Eternals' true mission and purpose, shared with him by the Eternals' leader, Ajak (Salma Hayek). Eventually, Sersi gave up on looking for Ikaris, and wound up falling in love with Kit Harington's Dane Whitman as her hunky rebound.

This is all fair enough — being ghosted is as valid a reason as any to move on from someone, start seeing someone else, and stop waiting around or looking for your ex. But not for Steve and Bucky.

RELATED: Captain America's freedom fail: How the powerful few justify answering only to themselves

Between "Captain America: The Winter Soldier" and "Captain America: Civil War," Steve and his new pal Sam Wilson (Anthony Mackie) have spent the past two years relentlessly searching for Bucky, never giving up despite Bucky's elusiveness. When they find him in "Civil War," Steve winds up not just risking his life, but willingly becoming an international fugitive and disbanding the Avengers, all to protect Bucky from being apprehended by international authorities. In "Civil War," Bucky is on the run after being framed for the assassination of King T'Chaka of Wakanda, and Steve is willing to stake everything on believing in his beloved "friend."

Steve arguably even gives up his identity as Captain America to save Bucky. After Iron Man learns that Bucky, under mind control by Hydra, killed his parents in the 1990s, Tony almost kills Bucky out of rage. Instead, Steve intervenes and saves Bucky's life, almost killing Tony in the process. It's in this moment that Tony reminds Steve that his signature Captain America shield was made by Howard Stark — Tony's father — and belongs to the government. Steve responds by dropping the shield and allowing a limping Bucky to lean on him, as the two flee and Steve metaphorically leaves his old self behind. It isn't until nearly seven years later in "Avengers: Endgame" that Steve and Tony mend their relationship, and Tony returns the shield to him.

Sure, Ikaris and Sersi's romance is canon, or real, within the MCU, while Steve and Bucky's love is ultimately portrayed as a platonic friendship in the movies. But by all means, what legions upon legions of devoted MCU fans refer to as "SteveBucky" is real to its 'shippers, or supporters.

Fanfiction.net, Wattpad, Tumblr and other popular fan platforms are brimming with "SteveBucky" fan art and fan fiction, some of which is arguably better written and more logical than actual MCU plotlines — certainly more logical than Steve bailing on his closest friends and all of humanity to travel back in time and be with a woman he kissed once 80 years ago in "Endgame."

Sure, unlike Ikaris and Sersi, Steve and Bucky don't get an (onscreen) sex scene. But Steve and Bucky's intimacy was arguably portrayed in even more passionate and intense ways than the two seconds of joyless missionary that Ikaris and Sersi share in "Eternals." Much of "The Winter Soldier" features endless montages of Steve and Bucky just going at it, throwing each other against walls and choking each other, all while sweating, writhing, and trying to catch their breaths. Yes, "Eternals" is the first ever MCU film to feature an openly, canonically gay superhero, but "The Winter Soldier" was two hours and 16 minutes of pure, undeniable homoerotic tension.

In any case, one of the best parts of the Steve and Bucky 'ship has been the actors' support for it. For years, the two have romantically posed with fans at nearly every Comic Con, and their off-screen bromance and love for the fans who ship their characters has been a source of joy for so many in the fandom.

More recently, following Evans' departure from the MCU, Stan has continued to play Bucky in the Disney+ show, "The Falcon and the Winter Soldier," in which Bucky befriends and embarks on adventures with Sam Wilson, the next Captain America. Consequently, fans who once shipped Steve and Bucky have gone on to ship Sam and Bucky, seeing Sam as an extension of Steve's spirit, and upholding the immortal love between Captain America and the Winter Soldier.

Where Mackie has made some questionable statements about the same-sex romantic shipping of Sam and Bucky, Stan's response perfectly encapsulates the beauty of fictional shipping: "I'm just happy that the relationship is embraced, and it should be embraced in whatever way or fashion that people desire and want it to be," he told Variety earlier this year.

Stan is right — fictional love and relationships are what we make of them. The measure of a fictional romance isn't whether it was "real" onscreen, but whether it resonates with and brings joy and excitement to fans. To that end, no matter what anyone says, Steve x Bucky was the first great MCU romance, and "Captain America: The Winter Soldier," the first MCU love story.

"Eternals" is now playing in theaters.