As the world celebrates Britney Spears' impending comeback Paris Hilton keeps trying and failing. Why is that? 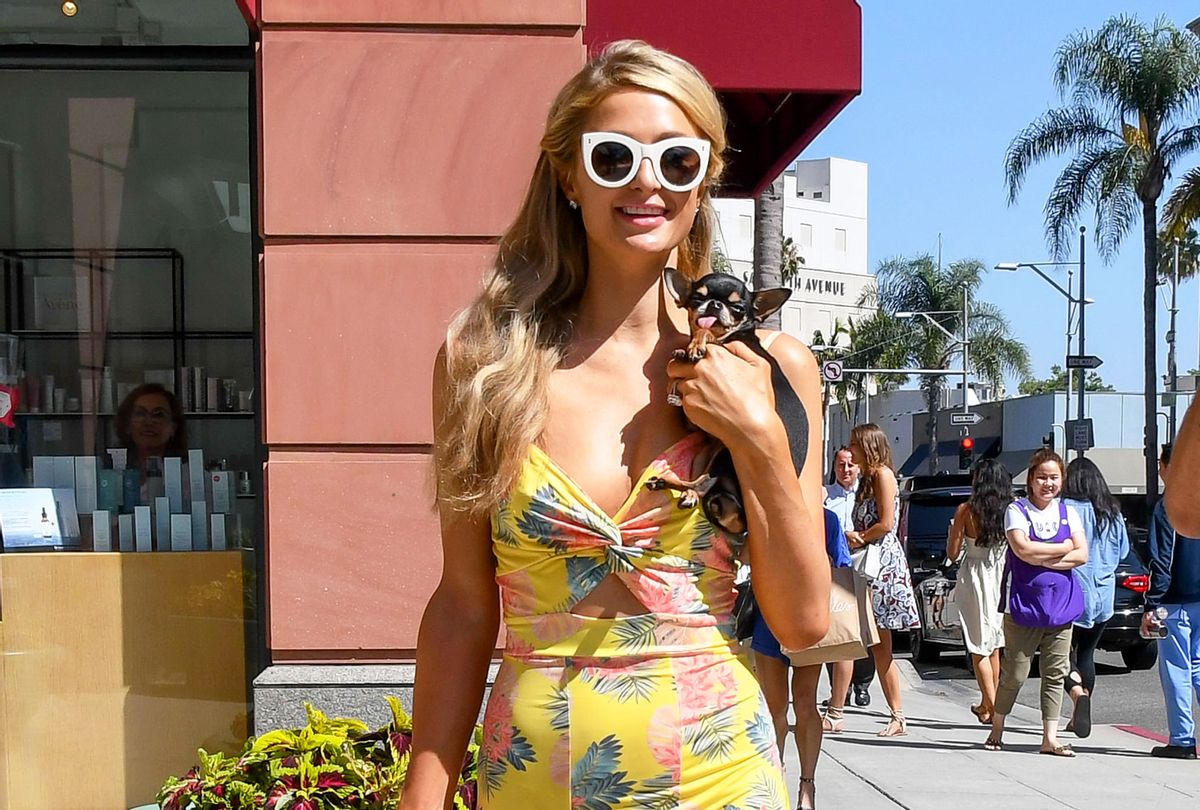 If Paris Hilton's recent comeback offensive has a purpose, it is to persuade the world that she is an adult. Not only that, but a human adult. One who talks in a baby voice and is obsessed with tiny dogs.

Hilton is as synonymous with her love of miniature canines as she is with being famous for doing nothing.  For a time, she wasn't seen in public without her teacup chihuahua Tinkerbell in the crook of her arm or peeking out of her designer bag. Tinkerbell was her constant companion until she became, ahem, too big. Then her mistress handed her off to her mother and began carting around her daintier public replacement, Bambi.

Then came, in no special chronological order, Diamond Baby, Prince, Peter Pan and many others. In her new Peacock series "Paris in Love" we meet Slivington, a Pomeranian-Husky mix (and, let's not think too hard about the logistics that made that possible) fond of chewing on Hilton's teddy bear slippers, gifted to Hilton by her husband Carter Reum, still her fiancé in the series.

Slivington, named after her attempt to sew "slay" and "living" into slang nobody uses, is one of a pack Hilton keeps in their own air-conditioned mini-mansion. They trot out a few at a time for the public to view – or maybe as proof of life? – in her recent TV projects, including the 2020 documentary "This Is Paris" and her recent Netflix glitter bomb "Cooking with Paris."

But they also remind us of why the larger public burned out on Hilton years ago, around the time purse dogs fell out of fashion. In the menagerie of American celebrity, she wants to be seen as Slivington but shares a lot more in common with tiny, too-adorable Tinkerbell, that avatar of mid-aughts materialism and ridiculousness.

"Paris in Love," the reality show chronicle of Hilton's engagement with Reum, will not change this perception any more than "Cooking with Paris" convinced us that she could identify a spatula in her own kitchen.

That show, and this one, are Hilton's mid-existence attempts to lay claim to an image and a brand that she never entirely controlled, that shaped who she is instead of the other way around.

For whatever reason Hilton's latest barrage of content asks us to simultaneously mourn her divorce from so-called normalcy and cheer her on as she reaches for the societally prescribed signposts of progress and happiness for the fairer sex. In "Cooking with Paris" she explains several times that her reason for making this show is to learn how to cook for the husband she plans to land and the babies she plans to have.

Her feigned interest in domesticity aside, "Paris in Love" shows she wasn't kidding about the marriage or the babies. The part that makes it hard to buy is knowing that everything else about her image is engineered for the sole purpose of securing attention from the public that she claims not to want.

"What would my life have been like if I just became a veterinarian, like I wanted to when I was little?" Hilton wonders in her signature baby voice in the opening scene of "Paris in Love" as she slumped on the floor of her closet.  "Maybe I wouldn't have all these tiaras."

There is no reason to care about what Paris Hilton is up to strictly for the sake of keeping up with her life. Let's be clear about that. But since she keeps vying for views via multiple TV series that fail to land, it may be interesting to view why we don't care.

After all, many millions of people care about the Kardashians. Many more don't care but at the very least know what one or two of them are up to because the family is virtually inescapable.

This year we also began caring, as in deeply, about the injustices Britney Spears suffered under her conservatorship. There's a 2004 episode of "South Park" that revolves around a ruthless parody of Hilton, painting her as a "stupid, spoiled whore" so unlovable that her pets, including a cartoon version of Tinkerbell, would rather kill themselves than remain with her.

That same half hour also painted Spears with the same brush by mention. The difference is that while nobody in South Park could explain what Hilton does to justify being famous, Spears' music is inter-generationally iconic. She helmed a long-term residency in Las Vegas while also being ridiculed for her mental health struggles.

Revelations in the New York Times documentary "Framing Britney Spears" changed all that seemingly overnight. In reality this phenomenon was years in the making thanks to the #FreeBritney movement which went mainstream following the report. As more people watched the documentary, cultural analysts and celebrities reappraised Spears' impact and meaning to popular culture and conversations about female agency.

On Nov. 12 a judge in Los Angeles terminated the conservatorship set up by Spears' father Jamie in 2008, through which she said he controlled every aspect of the 39-year-old woman's life, including her ability to have children.

That alone makes her a pop culture symbol of actual patriarchal resistance. Provided she plays her cards right, and it's all but guaranteed that someone will coach her on doing that, Spears is guaranteed to rise again as a rebellious picture of independence, success and overcoming.

What do Americans love more than that?

Contrast this with Hilton, who is nearly the same age as Spears and tried to capitalize on the #MeToo movement by way of a thoroughly scripted media tour during which promoted herself as a survivor of childhood abuse she suffered as a facility for troubled teens. She even went to Capitol Hill to testify about the nightmare she lived, hoping to shut down practices at such congregate care facilities that she described in draconian terms.

Few rallied to her cause.

Then "Cooking with Paris" joined a parade of pandemic culinary how-to shows in which a star with zero kitchen skills commits to learning how to make basic dishes.

"Selena + Chef" is an accessible work about process; "Cooking with Paris" is a show pony when famous guests gush over how influential Hilton used to be while she overuses edible glitter.

But "Paris in Love" is the most direct contradiction to that biting "South Park" vanishing pet satire and the tabloid tut-tutting surrounding Tinkerbell's demotion. The very premise proves the romantically unlucky socialite is worthy of being loved.

And he tells her, "I'm always happy to support you, because I love you so much."

In "Paris in Love," Reum positions himself as the lucky guy besotted by a woman who skips from room to room with what he calls a "neat unicorn trot." Their unequal profile is the real reason her friends insist this engagement, Hilton's third, might actually stick, since he's content to remain in the shadows while she gallops around the world.

They're right about the pair making it to the altar, which happened on Nov. 11 – one day before Britney's freedom captured all the headlines. The Hilton-Reum wedding was widely covered, of course, but beyond glimpsing the dress – who doesn't enjoy cooing over Oscar de la Renta couture? – there wasn't much of a reason to care.

That also explains why each of Hilton's TV projects has the staying power of cotton candy in the rain. It's not simply due to her missing her moment, first losing the upper hand in the game of currency to the Kardashians who dominated the fame for its own sake racket and the E! channel long before people ignored Hilton's 2011 reality series "The World According to Paris."

It isn't merely because her one-time friend Kim Kardashian went from being her plus-one to running her own fashion line and earnestly diving into passion projects like criminal justice reform.

And it probably has less to do with Hilton's overlooked history of making bigoted jokes and statements when she believed no one who matters was listening, along with anti-feminist ones when people were.

It's because Hilton hasn't presented us with anything about her that's believable.

During the monologue opening her recent appearance on "Saturday Night Life" Kim Kardashian reminded the audience that she is genuine in everything she does. Whether that's true matters less than the fact that people believe her. She and her family spent 20 seasons of TV letting viewers into their lives and turning every potential PR disaster into dramatic fodder. Either they are real or stupendously committed to sustaining the longest of long-form performances, or both.

Whereas the unearthed core of "This is Paris" is that Hilton is a woman who has existed for so long as an artificial entity that she isn't quite sure of who she is.

When Hilton ruefully says she's never really felt alone with her thoughts – "I was going to say I feel like this animal in a zoo people are looking at, but that sounds weird," she says – this ignores the obvious point that she is her own zookeeper. She bought the cameras. She wants you to observe the monitors.

When a scene in "Paris in Love" shows Reum proposing to Hilton during his recounting of the magic moment, which begins with, "We had rented a private island . . ." one can't quite discern whether it's a recreation or they hired a team to be on stand-by for the actual event. Either way, it's not entirely believable.

And yet from all indicators Reum is genuinely devoted to Hilton, unlike her male co-stars featured in other TV projects.

Reum, at least, has the look of a nice guy delighted to have been promoted from the friend zone. It's also apt that he is Hilton's co-star in the first project by her new production company 11:11 Media since up to this point, she's played to the image of her that was originally shaped by terrible men.

But as a character Reum falls short. That's bound to become a problem if his new bride insists on chasing trend narratives instead of figuring out how to spark her own. One wonders how well this relationship can weather the predictable family-focused squeakquels to this Peacock piece.

It's not tough to picture a series showing Hilton as a mother bemoaning her lack of privacy, Hilton sliving her way through her mid-40s and saying "that's hot" through the change. These stations of womanhood have already been constructed, interpreted and visited by Real Housewives and other trend-setting celebrities. But that merely underscores such retreads as must-have accessories to fame, the solid Pomsky replacements to the slighter Pomeranians and teacup chihuahuas that came before.

Slivington, like his predecessors, will likely recede from the spotlight, especially if he meets the expectations of his breed and tops out at 35 lbs. That's simply too heavy for an owner whose image is too slight to handle anything that solid, who keeps trying to capitalize on an image bred for yesterday's glitzy dog-and-pony show instead of breaking free of that old leash to make a run at being real.

New episodes of "Paris in Love" debut Thursdays on Peacock. Just an FYI.