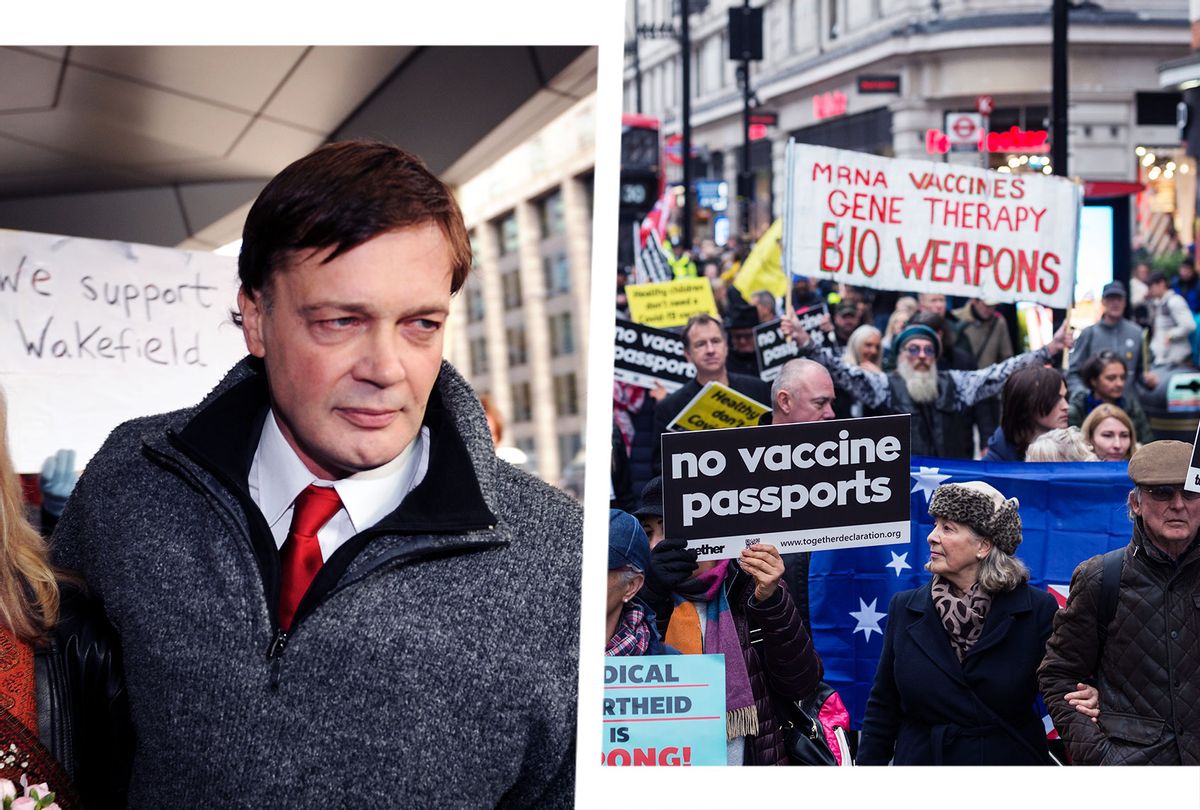 Discredited doctor, Andrew Wakefield | Demonstrators march through central London in a protest against Covid-19 measures including vaccine passports, mandates and inoculations for children on November 20, 2021 in London, England. (Photo illustration by Salon/Getty Images)
--

Long before the COVID-19 pandemic and the concomitant vaccine, the anti-vaccination movement was mainly identified with one very specific myth: the idea that vaccines cause autism.

Aside from being patently offensive to neurodiverse and autistic people (including this writer), version 1.0 of the anti-vax movement was also dangerous because its adherents made it easier for infectious diseases to spread. This wasn't just a theoretical fear: local measles outbreaks in places like Disneyland that occurred with greater frequency throughout the 2010s were tied to the increasing number of anti-vaxxers, who had collectively lowered the herd immunity numbers for diseases like measles which were once nearly eradicated in the United States.

Now that COVID-19 has changed the world, it is worth reexamining the legacy of that autism-related controversy, which may have proven to be the "original sin" that led us to this dismal moment in which anti-COVID-vaccination misinformation is rife. That means turning our eye to the inglorious career of a man named Andrew Wakefield.

Once a British doctor, Wakefield is infamous for being the lead author of a 1998 case series that studied links between autism and digestive conditions — and, he claimed, documented changes in behavior in children who were given the measles, mumps and rubella vaccine (MMR vaccine). Over time, this mutated into a claim that MMR vaccines could cause autism, prompting an international panic.

Because Wakefield's study had been published in a distinguished medical journal (The Lancet), his claims quickly circulated and influenced millions of parents to not let their children get vaccinated at an age when, they believed erroneously, they could be at risk of developing autism. This trend persisted despite the fine print within the study: notably, it included no data about the MMR vaccine, its conclusions were speculative, it had been poorly designed, and the researchers had only studied a small sample of patients. Other critics observed that, because autism is usually diagnosed at the same young age when MMR vaccines are supposed to be administered, the study could dupe impressionable parents into thinking the timing of their child's autism diagnosis was linked to the inoculation. These fears proved founded; measles outbreaks surged as more and more people followed Wakefield's uninformed advice. By 2019, the United States was experiencing its worst measles outbreak since 1994.

Soon, the people who merely suspected something fishy in Wakefield's study were given more than mere clues. Other scientists were unable to reproduce Wakefield's findings, which is crucial for scientific studies to be considered valid. Then, in 2004, Wakefield was hit with a double whammy: An investigation by Sunday Times reporter Brian Deer demonstrated that Wakefield had financial conflicts of interest he had not disclosed when publishing his report. It was revealed that Wakefield had established several autism-related medical businesses, but their success was predicated on establishing links between MMR vaccines and a likely-fabricated disease called "autistic entercolitis." On top of that, 10 of the 12 scientists who co-authored the paper retracted it on the grounds that "no causal link was established between MMR vaccine and autism as the data were insufficient."

By 2010 The Lancet fully retracted the paper, admitting that it was riddled with scientific errors and that the authors had behaved unethically, in no small part by studying children without the required clearances. Wakefield was ultimately stripped of his ability to practice medicine, although he continues to stand by his findings and insists he was mistreated.

A direct line can be drawn between Wakefield's assertions about MMR vaccines and the rhetoric about COVID-19 vaccines (an issue where Wakefield is also anti-science, but has not emerged as a prominent voice). Studies have repeatedly found that general vaccine skepticism increased as a direct result of Wakefield's study; just last August, researchers writing for the scientific journal PLOS One again confirmed that vaccine hesitancy went up after Wakefield's paper came out.

"The Wakefield et al paper arrived at an interesting time in history," epidemiologist Dr. René Najera told Salon in June. "The internet was growing. The 24-hour news cycle was growing. People like Jenny McCarthy and others were becoming 'influencers.' His paper only brought to the forefront fears that many parents had: that vaccines caused developmental delays. Before 1998, you didn't have the internet as a bullhorn, or time to interview or showcase celebrities."

While hesitation about vaccines existed before Wakefield, the British doctor made it possible for misinformation to do something that had previously only occurred in the world of epidemics: achieving virality. Even after Wakefield himself sank into obscurity, other anti-vaccine activists emerged to take his place. By normalizing the practice of questioning vaccines without regard to reliable medical knowledge, they laid the foundations for the denial of the COVID-19 vaccines that is so prevalent today.

Wakefield may not be one of the so-called "disinformation dozen" — social media voices today who create two-thirds of all anti-vaxxer content online — but he is their forefather. Without Wakefield, it is hard to imagine that the anti-vaccination movement would have been so loud before the pandemic that it would metastasize during it, to the extent that millions of Americans now view opposing vaccines as a crucial part of their identity.

Despite the claims made by Wakefield and others, there is no evidence that vaccines are in any way linked to autism. There is also no evidence that the COVID-19 vaccines are either unsafe or ineffective — or, as some kooks claim, have microchips in them. Autism refers to a broad range of neurological conditions that many doctors argue should not even be considered "unhealthy," and which certainly are not induced by vaccinations. Vaccines work by training your immune system to protect the body against pathogens (microorganisms that cause disease) by either introducing a weakened or dead part or whole of that pathogen into the body, or by teaching the cells to make proteins associated with a specific pathogen so that the invader can be identified and eliminated.