Belly up to Uncle Charlie's bar, where you'll learn "the male sciences" even if you have an absent father 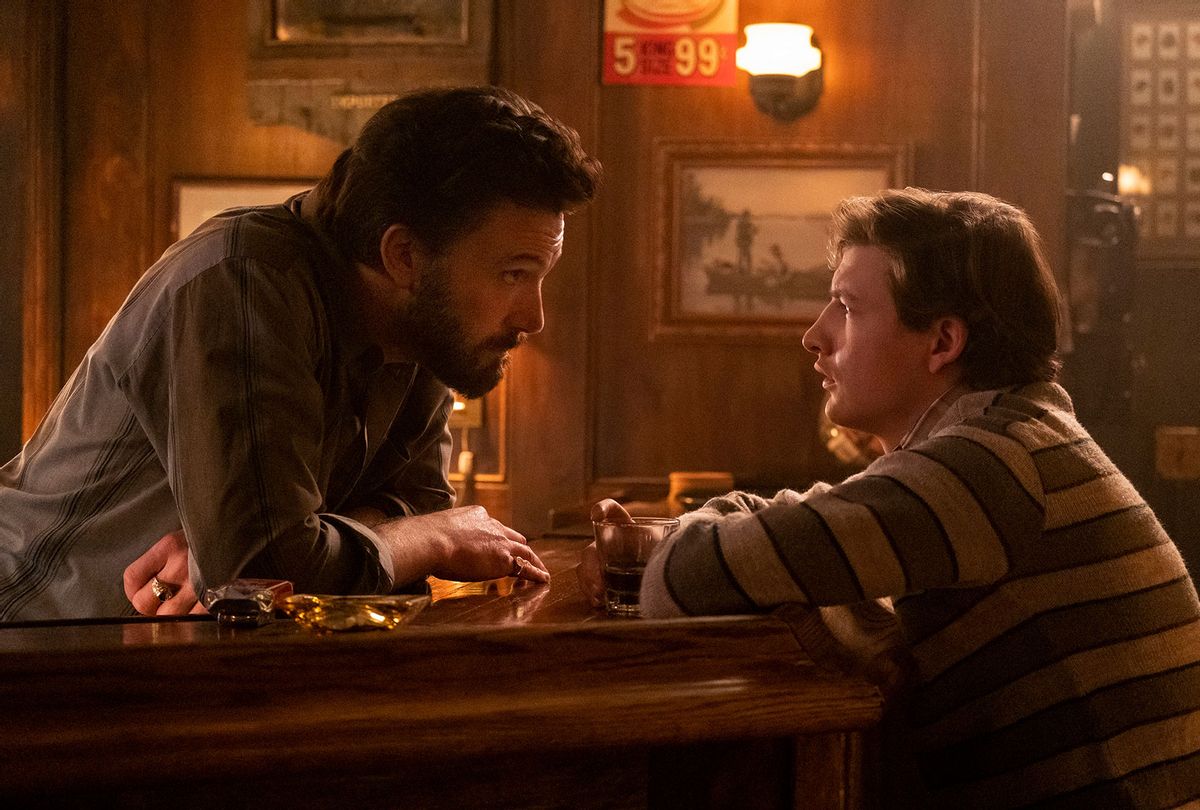 George Clooney's career as a director has been uneven. After a rocky start with "Confessions of a Dangerous Mind," he knocked it out of the park with "Good Night, and Good Luck." But most of his subsequent efforts, "Leatherheads," "The Monuments Men," "Suburbicon," and "The Midnight Sky," among them, failed to deliver on his promise.

Clooney's latest foray into directing, "The Tender Bar," based on the memoir by J.R. Moehringer, is patchy too, but this warmhearted drama has an undeniably shaggy appeal. Clooney succeeds here because he is telling a personal story, even if it is one that is purely formulaic. "The Tender Bar" pushes all the expected emotional buttons, but it works — even when Clooney can't resist the impulse to lay the sentiment on thick with a wistful voiceover, or a soundtrack of catchy too on-the-nose pop songs to tell viewers how to feel.

The story is simple and hardly novel. JR (Daniel Ranieri as a child; Tye Sheridan as a teen) is a straight, white, working-class kid in 1973 Manhasset, who gets into Yale, realizing his mother's (Lily Rabe) dream for him. (She also wants him to become a lawyer.) His DJ father, "The Voice," (Max Martini) is a deadbeat dad. As such, JR gets life lessons from his caring Uncle Charlie (Ben Affleck). In college, JR falls in love with Sidney (Briana Middleton), a biracial lower-upper-middle class Yalie, and experiences heartbreak while also striving to become a writer.

"The Tender Bar" is more gooey than edgy, and Clooney wisely lets the film unfold in an easygoing manner. Uncle Charlie's bar, named "The Dickens" (after the author, natch), is an inviting place with a library of books and generous barflies who buy JR drinks. Uncle Charlie dispenses his street smart wisdom — "the male sciences" he calls it — to teach JR how to be a man. He also encourages him to read and become a writer. (Which of course, he does). A fun sequence has Charlie picking up his bar buddies to go bowling, and Charlie pulls away before the guys are seated in the back. In contrast, a telling scene has JR's father taking his son for a ride, but the time they spend together in the car lasts less than it takes for JR's dad to smoke a cigarette.

The film is arguably better in its first half before JR goes to Yale. The exchanges between Charlie and JR are engaging and amusing, such as Charlie's advice about "not keeping money like a drunk" (in one's front shirt pocket) or watching Charlie battle wits with JR's 5th grade school shrink. Affleck is channeling Clooney the actor here in this role — playing a wise, direct, and rascally character. Yes, Charlie suffers a hangover, and even gets punched in one scene (to show he isn't perfect), but Affleck is relaxed and ingratiating here. His performance is never smug or smarmy. Moreover, Clooney gives Affleck room to just be and it is key to the film's success. It is easy (and essential) to see why JR is so enamored with his uncle. As the young JR, Daniel Ranieri is a real find. He is at his best in a corny but clever scene late in the film where young JR converses with older JR.

However, Clooney fumbles with his sense of timing. It is not just that the adult characters in the first half fail to age once JR becomes a teenager (Charlie sports a beard to signal the passage of time, but JR's mother doesn't seem to change). In addition, crosscutting to scenes of JR on a train to New Haven, and meeting a dyed-in-the-wool Irish priest (Billy Meleady), are mostly a way to provide some exposition about JR's ambitions and love life.

JR's relationship with Sidney, which is central to the second half of the film is also presented in a flawed manner. His romance is meant to be JR's great (albeit first) love — and watching Sheridan's face just light up when he sees her is magic. But their relationship is stop-and-start, and the heartbreak, which is meant to intensify, feels underdeveloped as the years pass. Viewers are more likely to take the narrator's word for JR's longing and loss than feel anything based on what is shown on screen. (Clooney jumps forward a few years here; it keeps the film from dragging, but it undercuts the emotional impact.) There is an awkward post-coital breakfast with Sidney's uptight parents (Mark Boyett and Quincy Tyler Bernstine) that feels cliché, too.  But more importantly, the heartache JR feels for Sidney is not unlike — but also nothing like — the pain and anger he has towards his absent father. Still, it should have been stronger.

But "The Tender Bar" shines when JR scores a win when he feels down or undeserving. Sheridan makes his character sympathetic even when he lacks self-worth. (His college roommate, Wesley (Rhenzy Feliz) seems to exist to mostly boost JR up). Sheridan excels as playing insecure young men — see also "The Mountain," "Detour," and "The Night Clerk" — but he is in danger of getting typecast.

Finally, Clooney may still be directing mediocre movies, but this melancholic coming-of-age film is more good than ambitious — and that may be why, even with its failings, "The Tender Bar" yields some modest pleasures.

"The Tender Bar" is now in theaters and will debut on Prime Video on Jan. 7. Watch a trailer for it below, via YouTube: