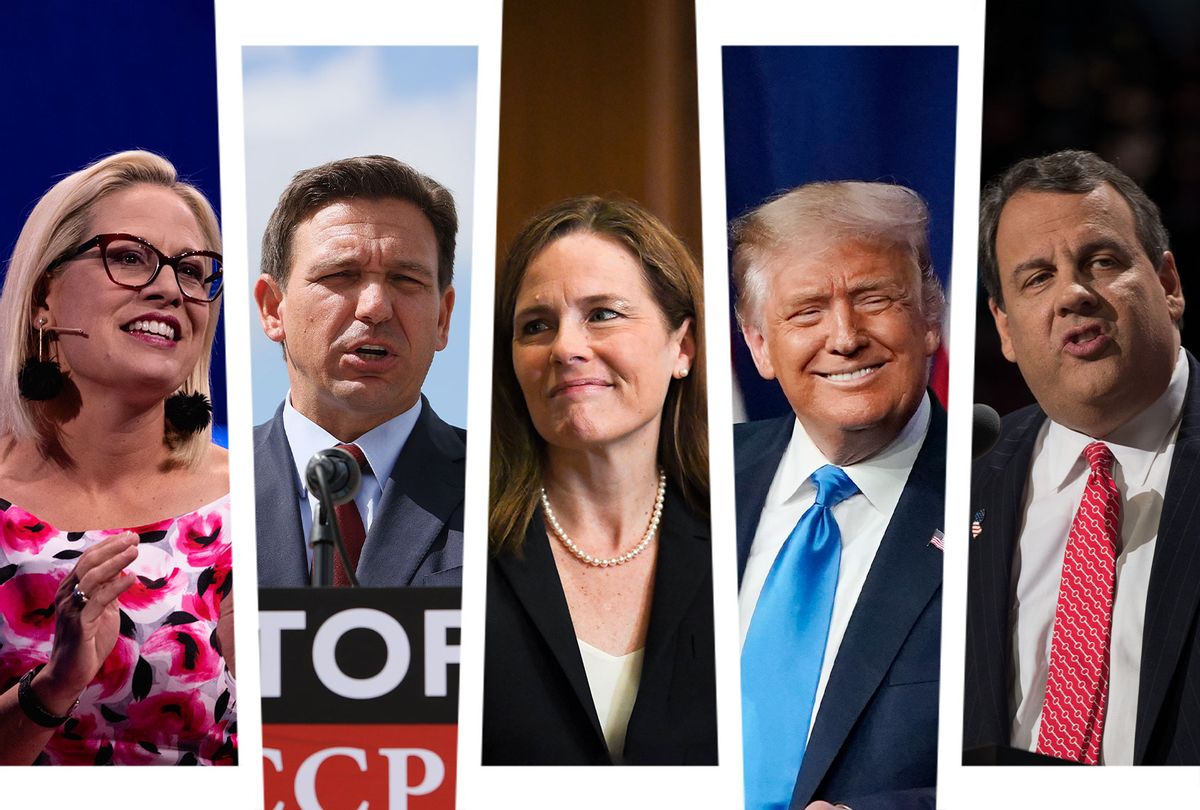 The common wisdom about the "hot take" —  the derisive term for a provocative but poorly argued position — is that it persists because social media algorithms don't really distinguish between people sharing something because they like it or because they're dunking on it. But, in compiling my list for some of the smokingest takes of 2021 — a year when boredom and national unease made the hot takes industry especially fecund — I saw a theme emerging. The theme, pitifully but inevitably, was endless variations of the claim that Republicans aren't as sinister, or frightening, or fascistic as the hotheaded #Resistance or "woke mob" make them out to be.

Journalists generally spend too much time on Twitter, and it's producing an irrationally strong urge in some media figures to portray themselves as the above-it-all voice of moderation, in contrast to Twitter noise-makers in their "Mueller Time" T-shirts. I even, on some level, get it. Social media rewards hyperbole. People take things too far every day. (For instance, reading lefty Twitter would leave one with the impression that a breakthrough COVID-19 case is a death sentence, as opposed to the relatively minor or even asymptomatic infection most people experience.)

But being annoyed by social media junkies who are addicted to self-righteous posturing is no justification for trolling folks with wrongheaded takes about how Republicans aren't so bad. Whatever other flaws #Resistance might have as a community, they tend to be right about one thing: Republicans suck. One underestimates that fact at their own peril. Take a walk, turn off Twitter for awhile, do real work. Anything is smarter than firing up a computer and writing that spicy take about how Republicans aren't the cartoon villains that they, in fact, are.

This piece in the Washington Post came just six months after the only president who attempted to end democracy by inciting a violent insurrection left office. The Post might as well have run a story about Mussolini's excellent train management skills except the premise was somehow even stupider because, unlike the Italian fascist Trump learned his chin gestures from, Mussolini actually cared about some matters of governance. Needless to say, any policies that actually worked under Trump were purely by accident and were not really a credit to a man so wholly incurious about the world outside of his ego that the only app installed on his iPhone is Twitter.

Most wrong: "How Ron DeSantis won the pandemic"

Trumpy Gov. Ron DeSantis of Florida set out to become, and succeeded at, being one of the most notorious villains of the pandemic. He not only blocked most efforts to curtail the spread of COVID-19, but even went so far as to sell merchandise advertising his contempt for public health officials. Naturally, championing DeSantis was irresistible bait for Michael Kruse of Politico. In March, Kruse wrote a piece headlined "How Ron DeSantis won the pandemic," and argued, "after 12 months in which he was pilloried as a reckless executive driven more by ideology than science," Florida "has fared no worse, and in some ways better, than many other states."

Then the delta variant hit, sending cases in Florida through the roof. The state has the 12th highest death rate and, as omicron tears across the country, has a case rate more than one-and-a-half times what it was during last winter's peak — and climbing. Over 62,000 Floridians have now died of COVID-19.

Most stubbornly insistent on being wrong: "Republican vaccine denial is not a political strategy"

Shortly after Joe Biden was inaugurated, it became obvious that Fox News and many GOP leaders saw a continuing pandemic as their best bet to undermine the Biden presidency. They quickly figured out that the easiest way to prolong things is convince their own supporters to eschew vaccination. There was some resistance, however, to say out loud that GOP leaders are willing to kill their own people for political gain, but some commentators — including myself and Brian Beutler from Crooked Media — were pointing this out early and often. Now, it's commonly accepted wisdom in the pages of the New York Times and the Washington Post.

Still, Jonathan Chait of New York Magazine refuses to see what is plain. In August, he petulantly insisted that this cannot be a political strategy. "Never attribute to malice," Chait argued, that "which is adequately explained by stupidity."

This faith in the non-malice of the GOP was a particularly strange stance in 2021, a year when Trump tried to overthrow democracy and the party backed him. Chait stood by his refusal to accept the GOP's sinister motives in November, even in the face of Republican governors bribing people to stay unvaccinated. Now right-wing media figures are raging at Trump for getting the booster. If they actually thought the shots were dangerous, they'd be worried about Trump's health. Anger belies that this is about holding the strategy line, not a legitimate fear of the shots.

Biggest lemming: "Kavanaugh Is the Last Hope for Abortion Rights"

This is one where it's hard to single out one hot take. Instead, this will be awarded based on a widespread rush to "prove" that the left is hysterical, one that blew up in many, many faces: The claim that Brett Kavanaugh and Amy Coney Barrett aren't as bad as the ladies in the Handmaid's costumes are saying. One juicy example is "Kavanaugh Is the Last Hope for Abortion Rights," written by Harvard law professor Noah Feldman in August. After a couple less-than-apocalyptic decisions in the summer, nearly every mainstream outlet had to issue a tut-tutting scold of the supposedly hysterical left, with headlines like "Barrett Flashes Independence" and "the Court has largely avoided partisanship."

Shortly after lulling the easily baited mainstream press into believing they aren't that bad, however, the conservatives on the Supreme Court turned around and upheld not just an unconstitutional abortion ban in Texas, but blessed the bounty hunter system to enforce it. And that's before they overturn Roe outright, which is what arguments in December suggested is all but inevitable next summer. And that's just the tip of the iceberg of right-wing radicalism experts believe is about to be unleashed by the court in the coming months.

Biggest dupe: The neverending quest for one good Republican

This one is for everyone who briefly fell for the Chris Christie "comeback" hype in November. ABC, CNN, MSNBC, the New York Times, and even The Daily Show all gave Christie fawning coverage over the possibility that he could emerge as an anti-Trump figure, a supposed return of common sense and sanity to the GOP. (A narrative that ignores how little the party had of either to begin with.) The whole thing went over about as well as New Coke:

But the fantasy of the "good Republican" will never die in the mainstream media, so expect many more rounds of this until Trump wins the party's presidential nomination in 2024.

In November, Stephanie McCrummen in the Washington Post wrote a glowing profile of Aubrey Schlackman, a far-right Texas evangelical planning to start a "maternity ranch" for women forced to give birth, due to the state's abortion ban. Anyone reading the article could see Schlackman's plan is to trap isolated pregnant women on a ranch, extract unpaid labor from them, and subject them to mandatory Bible study and lectures on the sin of fornication. But McCrummen uncritically portrayed this as "a Christian haven where women could live stress-free."

As many folks pointed out immediately, a quick Google search on the history of such practices would reveal that "maternity homes" are less spa-like charities and closer in spirit to prison camps. Past violations range from traumatizing women by forcing them to give up babies to imprisoning women for life to throwing dead bodies of "fallen" women into mass graves. While not technically a take, McCrummen gets the award as a reminder to do a little research instead of just assuming the label "Christian" preempts the possibility that someone is up to no good.

Biggest whitewash: "Sinema speaks up — and shakes off her critics"

Most of the reflexively wrongheaded impulse to troll the left centers on laundering Republicans. But I won't ignore the November Politico effort to clean up the reputation of Sen. Kyrsten Sinema, the Arizona Democrat who destroyed her own party's good name in 2021 with a truly stunning combination of stupidity, ego, and corruption.

"Sinema speaks up — and shakes off her critics," reads the headline of the puff piece by Burgess Everett and Marianne Levine, which attempts to paint Sinema as a reasonable and tough-minded Democrat, instead of what she is, a sleazy traitor who sold out not just her party but democracy itself. Sinema was clearly trying to use Politico to fix her image with Democrats. But she couldn't hold it together to coast on this reputation rehab very long at all. Within a month, she was spitting on Democratic efforts to protect election integrity and voting rights, reminding everyone that there is no amount of fawning coverage that can hide the rotten person underneath all those colorful clothes.

Next year, everyone, let's try to find some other reason to write stuff other than "this will annoy the overheated wine moms of #Resistance Twitter," okay? Oh, who am I kidding? That's like asking journalists to take time away from Twitter itself. Might as well ask the sun to stop rising or Donald Trump to think of someone other than himself.