"Animals Welcome. People Tolerated." pretty much sums up why we needed this second season of PBS' bucolic series 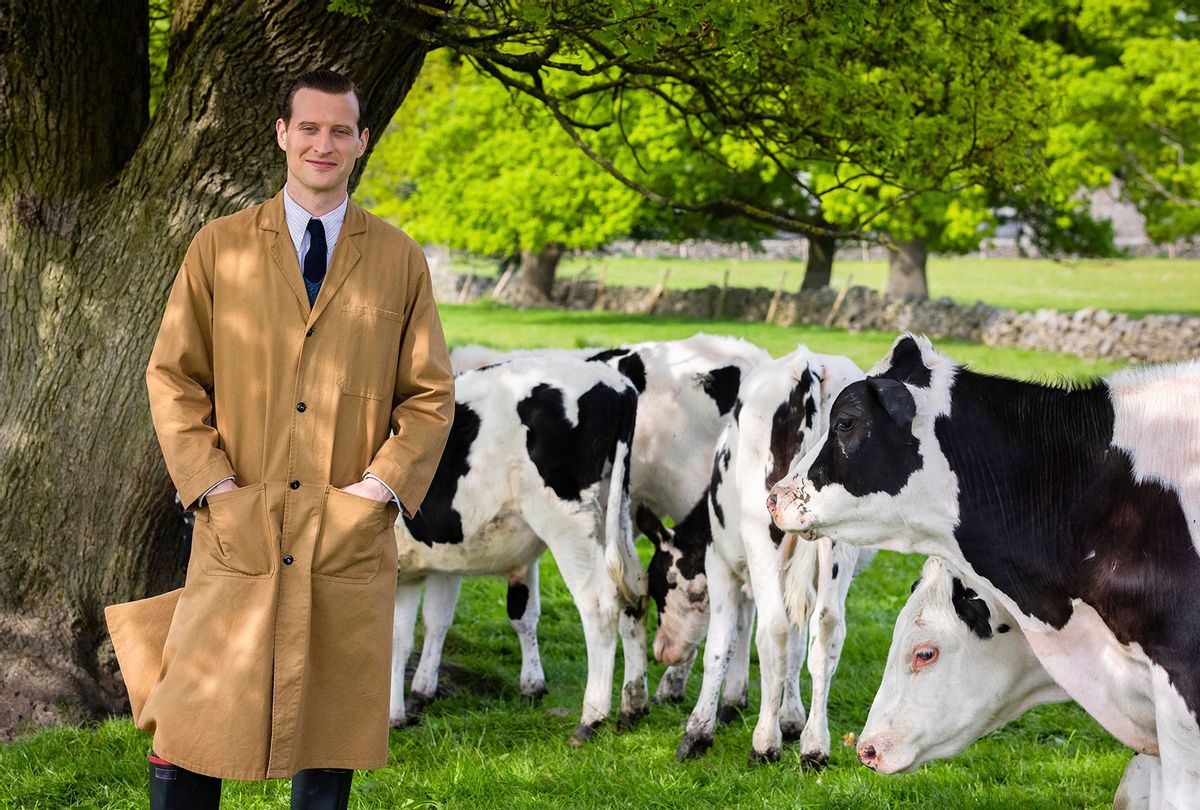 There's a sign on the barroom door at The Drover's Arms, the town's favorite pub on  PBS Masterpiece's "All Creatures Great and Small," that captures a sentiment shared many of us in 2021: "Animals Welcome. People Tolerated."

Even in 1938 people understood the healing power of an animal companion. Americans don't need convincing on that front, but as season 2 begins James Herriot (Nicholas Ralph) has a tough time persuading his bearish employer Siegfried Farnon (Samuel West) to expand their Yorkshire Dales veterinary practice to care for more small animals.

"Why people keep animals as pets is beyond me. A dog should have a function," declares Siegfried. "Let it be used for farm work, for shooting, for guiding. Not just hanging about the place!" Then he frantically looks about for his prized Golden Retriever and breathlessly asks, "Where's Jess?"

By the second season of "All Creatures Great and Small" we're wise to the gentle humor West's Siegfried personifies. As the lead vet in his business and the head of a household that includes Herriot, his carousing, trickster of a brother Tristan (Callum Woodhouse) and the bighearted, no-nonsense housekeeper Mrs. Aubrey Hall (Anna Madeley), Siegfried is a harmless contrarian.

He bellows commands and facts with absolute certainty before insisting he means the opposite moments later. He makes a show of being rough and unconquerable in one moment before softening like the down grass carpeting the hills that surround this quaint little hamlet. He demands that everyone pulls their weight, even the dog, but gives them space to figure themselves out. And in these new episodes he proves the value of having a boss who challenges his employees and makes them better, while respecting them enough take their feedback and criticisms seriously.

The salubrious nature of PBS' "All Creatures Great and Small" is established enough that if you're reading this, you probably don't need for further convincing.

Produced by Colin Callender, the latest version updates a BBC classic based on Alf Wight's books (written under the pseudonym James Herriot) that became a public television staple in the 1980s. Herriot's stories extol the wonder of the countryside and farm life, plain tales lacking the glamour and pomp of previous hits like "Downton Abbey" (with which director Brian Percival shares a credit). We'll never know whether it would have been such a sensation if it hadn't made its stateside premiere days after the Jan. 6 insurrection.

Happenstance can be an excellent show's best friend, and it turns out that this show was welcome enough to land PBS second place in the ratings on the night of its debut. If America yearned to relax and focus on something genteel and positive to counteract the alarming acrimony, this show fit the bill.

Nevertheless, it remains a marvel that a show where the main attraction is the promise of watching a handsome, pleasant man sink his entire arm into the backsides of large animals became something of a phenomenon.

Don't get me wrong, the appeal is obvious. Wight's books remain classics. Bringing them to TV also offers the opportunity to gaze at rolling emerald hills, enjoy people lovingly joking with each other over dinner watch calves being born – or puppies, the first season's Christmas gift – and generally be transported to a prettier place and simpler times.

With more than 70% of Americans calling themselves pet owners "All Creatures Great and Small," was destined to win a healthy audience. Writer Ben Vanstone laces the dialogue with crisp wit while drawing us into the drama of challenging veterinary cases. It isn't merely the animal's life that's at risk each time. Herriot is constantly putting his reputation and Siegfried's on the line – and the Yorkshire Dales is a very small place.

This is the element that leads the second season, alongside the glorious, verdant springtime scenery. An emphasis on caring for others is woven throughout the season, but these 1938 chapters are colored with the strain between the old and the new. (That note contains a tragic connotation, since the death of Diana Rigg, so perfectly cast as series mainstay Mrs. Pumphrey, required producers to recast the role with Patricia Hodge, who proves to be a fine parent to the heiress' Pekinese Tricki Woo.)

We see this in the friendly if uneasy tension between James and Helen (Rachel Shenton), a local farmer's daughter for whom he pines. Helen backed out of a wedding last season and has sequestered herself away from the community. Helen did this of her own volition, although her young sister Jenny (Imogen Clawson) favors James in the now-open race to win her heart.

The air of romance so present last season only thickens this year. Tristan, being something of a clumsy playboy, is in less of a hurry to settle down. Instead he's itching to figure out where he's going in life, a direction his brother Siegfried has gamed a bit by fibbing to him about the results of his veterinary exams.

These are all reasons for returning viewers to be reassured that the show is as delightful as it ever was – and starting during lambing season certainly doesn't hurt. Newcomers, however, may find encouragement about what the second season has to say about the value of what we do for work and where we do it.

When the series opens James is visiting his parents in Glasgow and visits a practice that has the latest equipment, most up-to-date tools and methods. Next to its immaculate examination rooms, Siegfried's humble home-based practice looks positively medieval. Joining the Glasgow vet would certainly look more prestigious on his curriculum vitae – and it would put him closer to his aging, struggling parents.

Yet in Yorkshire Dales, James has earned a high reputation. Following few early stumbles with a couple of cases, people trust him. He's saved a young farming couple from ruin by undertaking a risk operation on the cow into which they sunk their life savings, preventing a death that would have been inevitable otherwise.

In this new season he champions smaller animals – those dogs that don't have a specific "function" -- that would otherwise be put down in a place where livestock has more value than animals whose only service is comfort. James and Tristan recognize these creatures' worth (although Tristan pulls a fast one on a besotted bird lover in an early episode) and do whatever they can to preserve them.

Through it all we see him fall more deeply for Yorkshire, which is a stimulating vicarious experience in itself, as his appreciation for the worth and meaning of his vocation and the place where he's doing it expands. His arc validates all those conversations percolating through the culture about the worthiness of a job being measured by more than simply a paycheck.

A veterinary practice, he observes at one point, isn't about the place. It's about the people. He's surrounded by a lovely lot of them, along with their animals, and joining them for six these new hours certainly makes life much more tolerable.

Season 2 of "All Creatures Great and Small" premieres Sunday, January 9 at 9 p.m. on PBS. Watch a trailer for it below, via YouTube.