Sorry McCarthy, those who protect Trump will "suffer the same consequences that I’m suffering," Cohen once warned 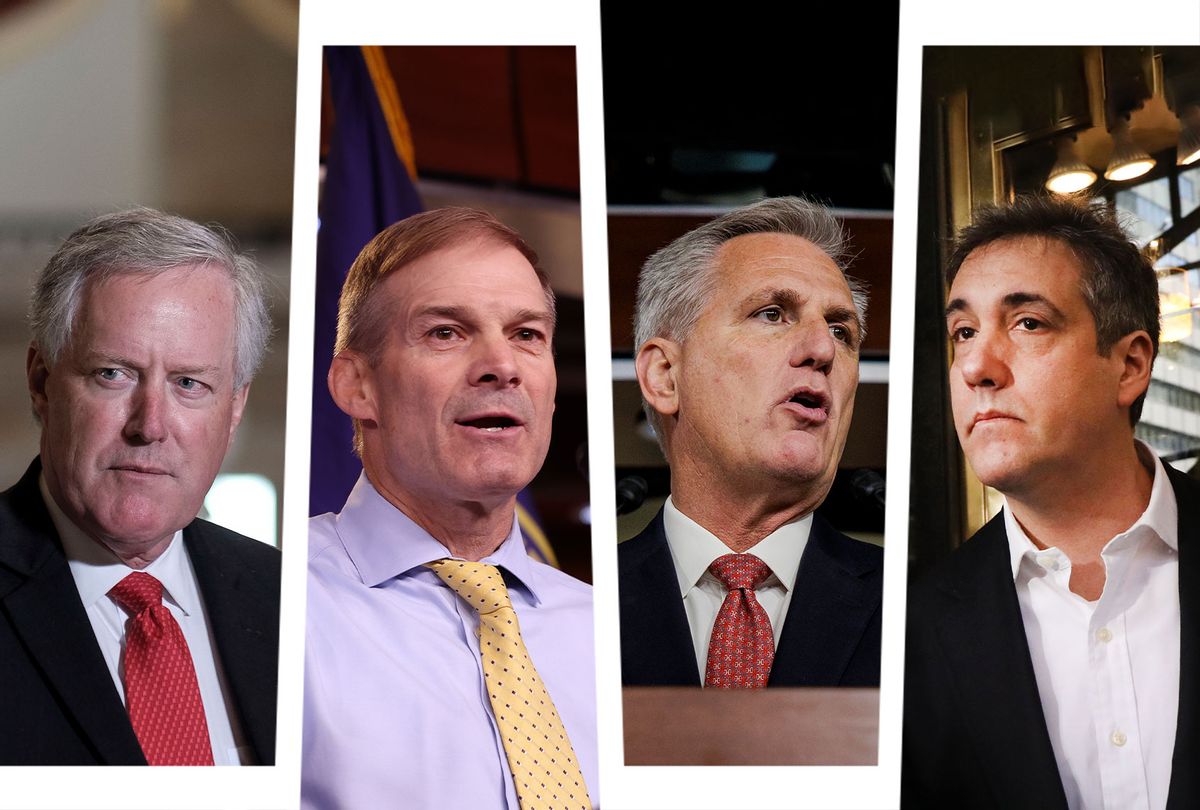 In February 2019, Donald Trump's former lawyer — or, as Michael Cohen called himself, his "fixer" —  testified in front of the House Oversight Committee, a mere two months after he was sentenced to prison for committing campaign finance crimes on Trump's behalf. The committee had recently come under Democratic control, but alas, Republicans were still allowed to sit on it, which meant that both Cohen and the nation were subject to a garbage truck's worth of bad faith grandstanding. The ringleaders of the disingenous theatrics were then-congressman Mark Meadows — who later went on to become Trump's chief of staff — and Rep. Jim Jordan of Ohio, who started with a failed effort to stop Cohen from testifying and moved on to highly performative accusations that Cohen was somehow lying about claims that any fool could see were obviously true, such as that Trump is a racist.

Cohen, who was clearly rattled by the operatics, nonetheless pulled himself together and issued a sobering warning to the Republicans who strive to cover up Trump's seemingly endless list of crimes.

"I'm responsible for your silliness because I did the same thing that you're doing now for 10 years," he said ruefully. "I protected Mr. Trump for 10 years."

He then offered this ominous warning: "The more people that follow Mr. Trump, as I did blindly, are going to suffer the same consequences that I'm suffering."

After he finished his testimony, he returned home to await his prison sentence. He eventually spent over a year in prison and another year and a half in home confinement.

A lot of what Cohen said that day was prophetic.

"I fear that if he loses the election in 2020," Cohen warned of Trump in his closing statement, "that there will never be a peaceful transition of power."

Sure enough, Trump reacted to losing to Joe Biden by launching a coup that ended in a violent insurrection on January 6. But despite the accuracy of Cohen's prediction, Republicans continue to refuse to take his warnings seriously. On the contrary, they are covering up for Trump's coup in exactly the way Cohen told them was dangerous to do. Indeed, two of the men who are sticking their necks out for Trump — Meadows and Jordan — were warned directly to their faces, but they are not taking heed.

Under implicit and probably explicit orders from Trump, Republicans who are believed to have information about Trump's actions on and before the Capitol insurrection are refusing to testify to the January 6 committee. So far, only Steve Bannon — a former White House advisor who mostly assisted Trump's anti-democratic efforts from outside of the White House — has met with legal consequences. He was indicted in November for refusing a subpoena. However, there's good reason to believe that similar criminal charges are coming for the rest of them. Just last month, Meadows was referred to the Department of Justice for contempt charges.

Now the committee is turning its eyes to sitting GOP congressmen.

Both Jordan and House Minority Leader Kevin McCarthy of California are refusing to testify to the January 6 committee. Notably, both have been bombastic in the past about how unafraid they are of testifying. In both July and October, Jordan bragged that he has "nothing to hide" and claimed he would be glad to testify. Whoops, I guess he actually has a lot to hide! And McCarthy has, of course, played the same game:

Q: Would you be willing to testify about your conversation with Donald Trump on Jan. 6 if you were asked by an outside committee?
KEVIN McCARTHY: Sure.

Unfortunately, the response from the committee, as is typical of anything congressional, is way too slow for our fast-moving world. So far, they have only told reporters that they will "consider" subpoenas — much less using the threat of criminal charges to enforce subpoenas — against members of Congress who refuse to cooperate. Still, the committee, as slow-moving as it is, has been far more courageous about pursuing its work than often-too-true stereotypes of cowardly Democrats would have predicted.

RELATED: Trump trashes GOP senator as "woke" for acknowledging that 2020 election was "fair"

Trump's allies are, of course, hoping their power will protect them. And it very well might. The committee is being drowned in lawsuits, many of which are going through Trump-appointed judges who were largely chosen because they are reliable partisan hacks. So no one should get overly excited at the idea of these fools going to jail, as decades of work have gone into making sure that Republicans who commit crimes against the country are shielded from criminal exposure for doing so.

Certainly, the one thing none of these men should count on is Trump's loyalty.

As Cohen warned them, you can put it all on the line for Trump and he will hang you out to dry without a moment's hesitation. Just ask his former vice president, Mike Pence, who spent years being a shameless lapdog for Trump. His reward for all that loyalty was that Trump sicced a murderous mob on him on January 6. To this day, Trump has made excuses for the murderous intent towards Pence displayed by his followers. In November, he defended their chants of "hang Mike Pence" by saying "the people were very angry." Pence, for his part, seems to have learned from this that loyalty to Trump is repaid with a slap to the face. Recent reports suggest Pence's team — unlike Meadows, McCarthy, and Jordan — is cooperating with the January 6 committee.

Still, most of the rest of Republicans continue to labor under this delusion that helping Trump out will benefit them. And it's true that he will allow lackeys to experience power, so long as they stay loyal to him. But the price, as Cohen and Pence found out, is living under the mercurial rule of a man who feels he owes nothing to nobody. Remember Republicans, Trump will send you to prison or let a mob try to murder you if you are seen as failing him even in the slightest way. Sleep easy.