Now and then: How "Yellowjackets" purposefully reminds Gen Xers of who we thought we'd be

If '90 pop-feminism sang about a different world, this show remind us of how empty those promises were 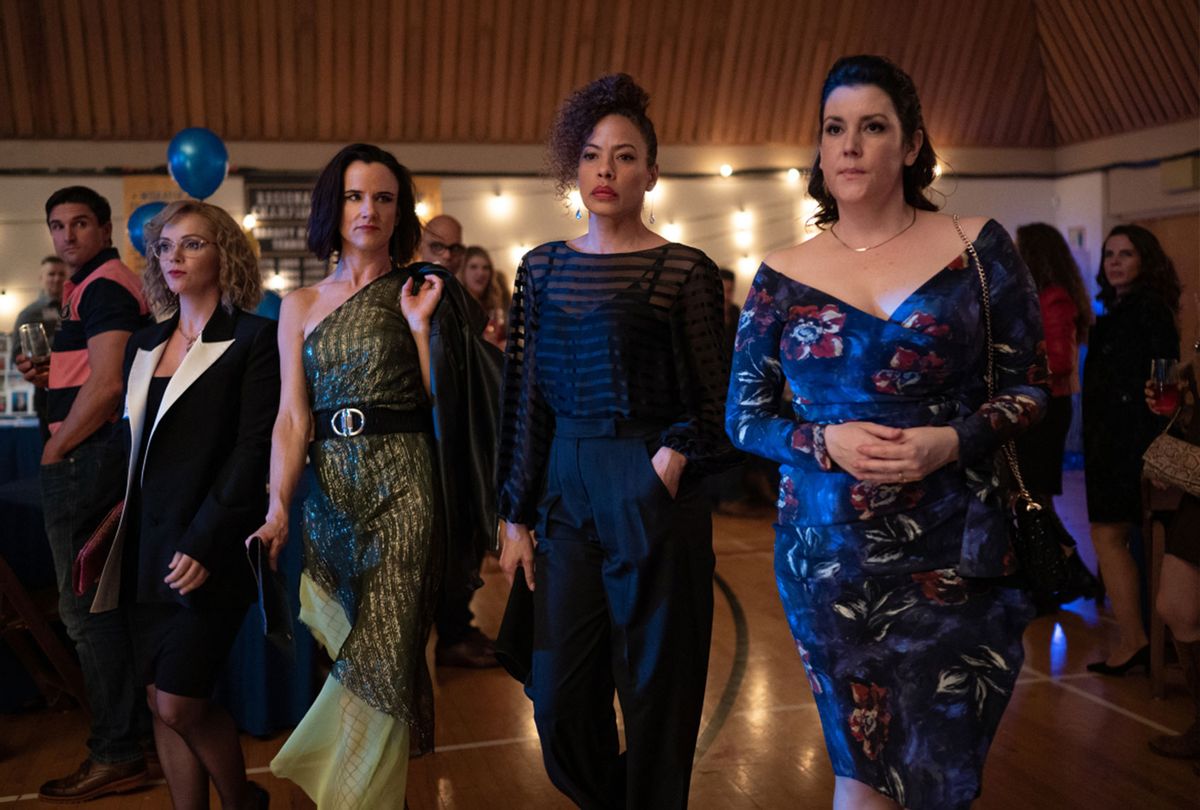 There's no better event for "Yellowjackets" to close its first season than at Wiskayok High School's 25-year reunion, a place to reconnect with old friends, reconstitute long-dissolved memories and slow-dance to their year's Top 40 hits.

As surviving members of the 1996 regional championship soccer team, the girls who lived through a plane crash and refuse to talk about it, Shauna (Melanie Lynskey), Natalie (Juliette Lewis), Misty (Christina Ricci) and Taissa (Tawny Cypress) would rather their classmates and the rest of the world forgot about them.

They've been hounded all their adult lives by gossips and reporters eager to confirm suspicions that these girls survived 19 months in the wild by committing horrific acts. A middle-aged gathering with a depressing slideshow of unfortunate hairstyles is probably the last thing they need.

But they're showing up to honor tradition . . . and besides, they have grimmer problems to confront than realizing how far away they've drifted from the girls they used to be. They have a body to hide, a blackmailer to find and the murder of an old friend to solve. Their lives depend on completing all these tasks. And if there's one thing women of their generation have drilled into them, it's that winners can and must do it all.

There's something about the 25-to-30-year distance between adolescence and middle age that lends itself to gazing back at our teenage years with absolute clarity, inviting us to assess how many of our cocky adolescent ambitions fell by the wayside. It's also enough time for the trappings of an outdated era to cycle back into fashion while losing the contextual meanings that made them edgy in their day.

"Yellowjackets" rages at the divide, and that makes it less of a sweet memory piece than the likes of "Almost Famous" and "Stand By Me," definitive nostalgia traps with a male frame of reference. These movies wistfully avail themselves of the quarterlife separation between youth and wisdom; "Yellowjackets," in its 10-episode opening salvo, hints at the things a woman is expected to compromise when time and circumstance shrink her list of options. But the repressed anger that launched countless manifestos all those years ago remains intact.

And the 1996 story vein flows with the feeling of that era. The proof isn't simply in the photos of Kurt Cobain and "Dazed and Confused" and "Reality Bites" posters on the walls of Shauna's (Sophie Nélisse) childhood bedroom, or each episode's conscious deployment of mood-shifting pop songs likke Salt-N-Pepa's "Shoop" or Love and Rockets' "Alive." It's in watching golden girl Jackie (Ella Purnell) cool down in-fighting among friends at a bonfire party not with an empty feel-good speech, but with the directive to say something nice to each other, about each other.

This is a very high school thing to do . . . but it also sounds like an imperative the team captain borrowed from an affirmation on a sticker or two (or 10) on her locker, one of those Claire's Boutique or Hot Topic trinkets declaring "The Revolution Starts Here + Now With Each One of Us" while reminding us to "Be a dork and tell your friends you love them."

Those ideas were never supposed to be purchased. Originally they were offered for free. But that's the odd thing about 1996 – it was an in-between place for women.

In their hometown the local pizza parlor roots for the boys baseball team even though the girls are the ones who brought home trophies of their school. Out in the middle of nowhere, young Shauna, Jackie Misty (Samantha Hanratty), Taissa (Jasmin Savoy Brown), Natalie (Sophie Thatcher),  Lottie (Courtney Eaton), Van (Liv Hewson) and their other surviving classmates rule unchallenged.

There, they were free to do all these things and perhaps never as liberated as when they were facing starvation. They meet it head-on with a Doomcoming, their version of a class dance where they plan to get drunk on berries they've foraged that have fermented. But they also accidentally ingest psychedelics, and end up surrounding Travis (Kevin Alves), one of the boys who lived through the crash with them, and chasing him through the forest.

This is a terrifying sequence that also goes entirely wrong; in some ways it's also euphoric to witness. Because this is one of the few scenes we see of the girls where they're not angry, worried, exhausted or coping, nor are they falling into classic visions of what we expect girls to be or do. They're feral as a Bikini Kill riff and set loose on the world.

From the perspective of 25 years' worth of remove, the youthful dreams of the '90s weren't being lived up to even then. Girls like the Yellowjackets probably read Sassy while being aware that if you were a woman like Anita Hill, who took a public stand against a powerful man who did her wrong, the man would win.

Their ordeal happened a few years before Britney Spears burst onto the scene, and the world became familiar with the name Monica Lewinsky. It has taken most of the years that passed between the crash and the reunion for the world to recognize how deeply wrong the public was for judging and hounding these real women for their perceived sins.

Thus we can understand the ways holding the secrets of those unforgiving hinterlands take a toll on the adult versions of those unfettered girls. At one time or another during these episodes, each of has wondered what kinds of women they would be if they hadn't been lost to civilization for 19 months.

Shauna muses that she would have gone to Brown and written about Dorothy Parker and Virginia Woolf while romancing a floppy-haired boyfriend. Taissa counters by listing all the things she actually accomplished, including a double major at Howard University, where she graduated first in her class, leading to Columbia Law and a stint at one of the biggest firms in New York.

"If I'm being honest," she admits to Shauna, "not a single one of those things felt real."

Shauna's reveal about abandoning her Ivy League dreams is one thing. But we see her settling for less in her marriage to Jeff (Warren Kole), which chugs along blandly as she suspects him of cheating on her. In its most stable moment we watch Shauna's long pent-up rage strike out at a rabbit digging up her garden, which she butchers without a blink and cooks for her family. That's her darkness, but it's also part of her that doesn't go away. Neither do her carnal desires.

Separately Shauna's and Taissa's marriages are in trouble, if not ruins; Natalie's sobriety is floundering; and Misty isn't entirely sane. Since we're a few years past the point when Generation X woke up to all the ways that the mainstreaming of feminism in 1990s hoodwinked young girls into equating empowerment with "Leaning In," the tyranny of self-actualization and twice the work for half of the payoff, many of us can relate to them.

And while millennial women are the ones bearing the greater burden in our pandemic-induced "she-cession," Taissa shows how much of a toll a relentless "have it all, win it all" drive for its own sake takes on a woman's sanity. Her need to win brings out the aggression we first witness on the soccer field, when she accidentally breaks a freshman teammate's leg; the plane crash's near-death experience morphs it into something beastly that's eating who she is from the inside out.

We've yet to see how Natalie fell from her launch trajectory, but her familiarity with abuse and hard living hasn't dulled her intelligence. Instead it has banged up a heart that disaster opened wide. Misty, in contrast, is exactly where she needs to be from what we can tell. Working in an elder care facility, she exerts control over the elderly and frail who both need and fear her.

In 1996, Shauna, Misty, Taissa and Natalie haven't an inkling that any of this is in store for them before their plane plummet to earth in a blaze or in the precarious weeks afterward.

Sprinting through a time when the popular definitions of female empowerment were being reduced to some invisible line between the riot grrrl movement and the Spice Girls, the world nevertheless yawns wide with possibility. But the tragedy underneath everything else that happens is that even stripped of all obligations to convention and hierarchy in those woods, they still cannot help turning on each other.

And this is the knottier grimness beneath the ever-present dread written into the 1996 mystery asking how these young women fell from collaboration, real girl power, to devouring each other. A radio bursting with poppy anthems sung in confident voices assured us that could never happen: friendship never ends, right?

If the "Yellowjackets" viewer who lived through that era relates to how stifled 40-something Shauna, Natalie, Taissa and Misty are, perhaps a part of them is also thrilled at seeing their girl-selves howling through the woods during their Doomcoming frenzy.

That's one of the most terrifying, dangerous passages the foursome likely never talks about in public, let alone with classmates who weren't there. We've gotten clues that this bacchanalia isn't a one-off and leads to eviler turns.  But there's a shiver of honesty in that moment, a wildness that the pressures of career and family responsibility, along with ache of time's passage, smothers. That makes this show so viscerally addictive and thrilling, because in 2021, we know these women are capable of savagery but very afraid of threats they can't identify in the dark.

But in that scene from 25 years ago, they were teen girls fearlessly pursuing prey for once instead of the other way around.

The season finale of "Yellowjackets" airs Sunday, Jan. 16 at 10 p.m. on Showtime. Watch a teaser for it below, via YouTube.