"Pam & Tommy" is the greatest, hugest love story ever told about an unauthorized celebrity sex tape 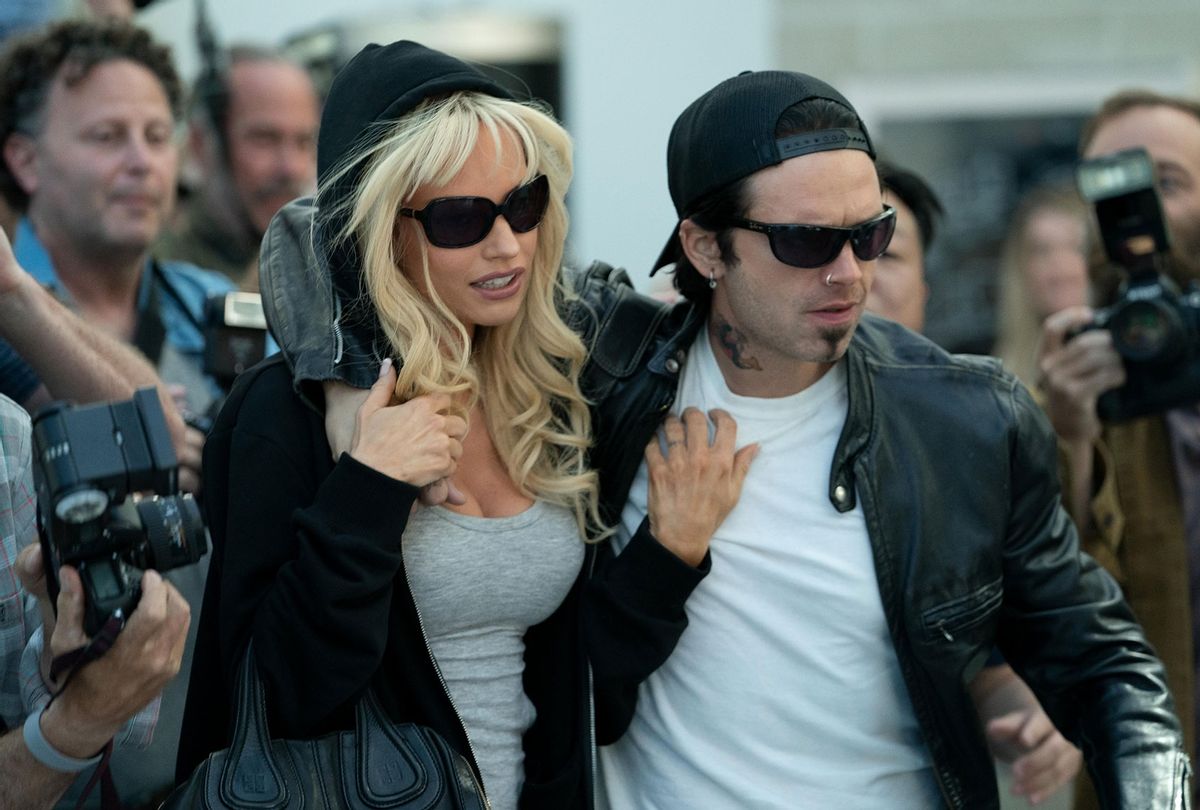 The people behind Hulu's "Pam & Tommy" have an inkling of how you probably feel about their subjects. As for those who have no opinion – either because "Baywatch" and Mötley Crüe were before their time, or because somehow all the tabloid headlines the pair inspired flew right by them – the first episode provides a succinct and handily prejudicial summary.

At first it leads you to believe that Pamela Anderson (Lily James) and Tommy Lee (Sebastian Stan) had it coming to them – "it" being the worldwide exposure of the most intimate moments of their honeymoon by way of a stolen video cassette being leaked onto the Internet.

This is the doing of Rand Gauthier (Seth Rogen), a carpenter and pushover of whom Lee takes advantage. We meet him first in "Pam & Tommy" while the eponymous couple is loudly humping in a nearby room, and he has to pretend to ignore their screams and moans as he drives nails into the custom built-in bed frame he's creating for the newlywed's sex palace.

Lee, the drummer for Mötley Crüe, is one of the biggest names in rock and roll. Anderson, who starred in "Baywatch" as lifeguard C.J. Parker, hoped to parlay her fame into more serious acting roles, proving she was capable of more than jiggling in a bathing suit.

But to Gauthier in 1995, she's little more than spank bank material, while Lee is just another impossible to please dirtbag who keeps changing his mind about the job without paying his workers.

Eventually Lee fires Gauthier's crew and stiffs them, leading Gauthier to take his revenge by absconding with a safe from Lee's garage.

This is how the first viral celebrity sex tape was thrust into the public sphere. Whether that comeuppance was deserved is one question this wild story grapples with as it also dissects who really pays the price in acts of revenge.

"Pam & Tommy" is a funny piece of work in every sense of that description. It commits to its comedic peaks with the same gritty energy it devotes to emotional lows, inviting us to ride the couple's champagne and ecstasy-driven hedonism as it portrays their love, however hastily realized, as genuine.

Like several rear-viewing examinations of events and people whose downfalls played as salacious diversions in their time, the sex tape brouhaha receives a second look as one of the earliest tests of the Internet as a proliferating force and a pioneering privacy rights case.

But where other ripped-from-near-history works like "Impeachment" fall short in fully connecting with the humanity of those involved, the soul of "Pam & Tommy" overflows with vulnerability and pathos. Their sex tape became a phenomenon for crucial reasons besides its easy availability, the writers posit.

This is precisely the selling point that Gauthier's distribution partner Uncle Miltie (Nick Offerman at his oily finest) sees as well. "This is so . . . private. It's like we're seeing something we're not supposed to be seeing," he says," . . . which is kind of what makes it so f**king hot."

Although it initially freights our empathy scale to favor Gauthier's side, the story humanizes all parties as it progresses. Gauthier, unsurprisingly, is a natural fit for Rogen, an actor who's made a career of compassionately playing misguided misfits, and who developed this series alongside his producing partner Evan Goldberg.

He realizes Gauthier as an amiable, naïve spiritualist who sees a get rich opportunity within his rash action. But he doesn't foresee how quickly the appeal and evolving technology will move proprietary control of the tape beyond his reach, and become more liability than boon once the mob shark (Andrew Dice Clay) who lends Gauthier and Miltie the cash to get up and running tightens his leash.

Stan does some heavy lifting to move the needle on Lee from rock star caricature to a man rendered powerless by the circumstances that have befallen him, even if they are of his own creation.

Appropriately, though, the person who commands the most sympathy in all of this is Anderson, whose career was effectively extinguished by the right-left hook combo of the sex tape and her star-turn in the 1996 action bomb "Barb Wire."

James' portrayal is undeniably delicate and compassionate, defying the common '90s portraiture of Anderson making her out to be a libidinous twit. The script takes an alternate view, showing how "Baywatch" producers sold Anderson short by refusing her a chance to act, preferring to pay her to jiggle her way through the surf as she ran.

Once the sex tape circulates more broadly that anyone could have anticipated, she's the one who points out that while her husband will only benefit from having his prodigious member exposed to the world, her image would only be further devalued. But none of the men get it – Tommy least of all. "I'm on that tape too!" he insists each time she demands a bit more understanding than he's willing to cede.

These scenes makes one wonder whether the discourse that sprouted from our re-examination of Britney Spears and Janet Jackson finds its way to Anderson.

Even if it doesn't, "Pam & Tommy" drums up a lot of emotions, including hysteria and shock – simultaneously, at one point, thanks to a scene showing Lee having a long conversation with, shall we say, Mötley Crüe's unsung fifth member (immaculately voiced by Jason Mantzoukas).

The fact that Stan plays this scene mostly straight amplifies the astonishment of watching it play out in front of us, creating a bizarre emotional combination of disbelief and appreciation. I can honestly say I never expected a show would go as far as this does. At the same time, that scene is entirely in tune with our concept of a guy who draws immense pride from having rock and roll's hugest hog.

Stan and James deserve all the credit for their persuasive performances, and not simply due to the makeup and wardrobe magic that makes them doppelgangers of Lee and Anderson in their prime. Certainly the accessories help. But the finest wigs and tattoos can only take the audience so far in viewing Lee, a man dripping with sleaze, as a short-fused dolt who is honestly and obviously in love with his wife.

Stan and James' chemistry is white hot, and in a story like this that's a non-negotiable requirement. The real Pam and Tommy were a volatile spectacle from the start, beginning with their marriage after a four-day drug propelled courtship and winding through legal troubles that include charges of spousal abuse to which Lee pleaded no contest. But they also reunited for a short time after their 1998 divorce, proof that what they had together was real regardless of how short it lasted.

Perhaps the strangest legacy of this whole business involves the realization of how much popular culture and social media owes to the realm of celebrity sex tapes. If not for Paris Hilton's, would anyone have cared about "The Simple Life," the show that made her a household name? Would the Kardashian name have any cachet without her brush with X-rated infamy?

Now think of all the trends that originated with those two: the selfie, purse dogs, contouring, thong heels, public awareness of and/or emotional investment in Kylie and Caitlyn Jenner, to name a few.

This is not to imply that having their most intimate moments made public without their consent is a good thing; regardless of how shrewdly their PR teams and momagers spun these incidents, it was still a violation of their privacy. (There's also another bizarre connection, thanks to Anderson's link with Rick Solomon, the man who leaked Hilton's tape, and who she married and divorced twice.)

The first three episodes of "Pam & Tommy" are currently available on Hulu. New episodes premiere on Wednesdays. Watch a trailer for the series below, via YouTube.