Burn it all down, Sally. Netflix's film needs to embrace a new type of character, whose power comes from experience 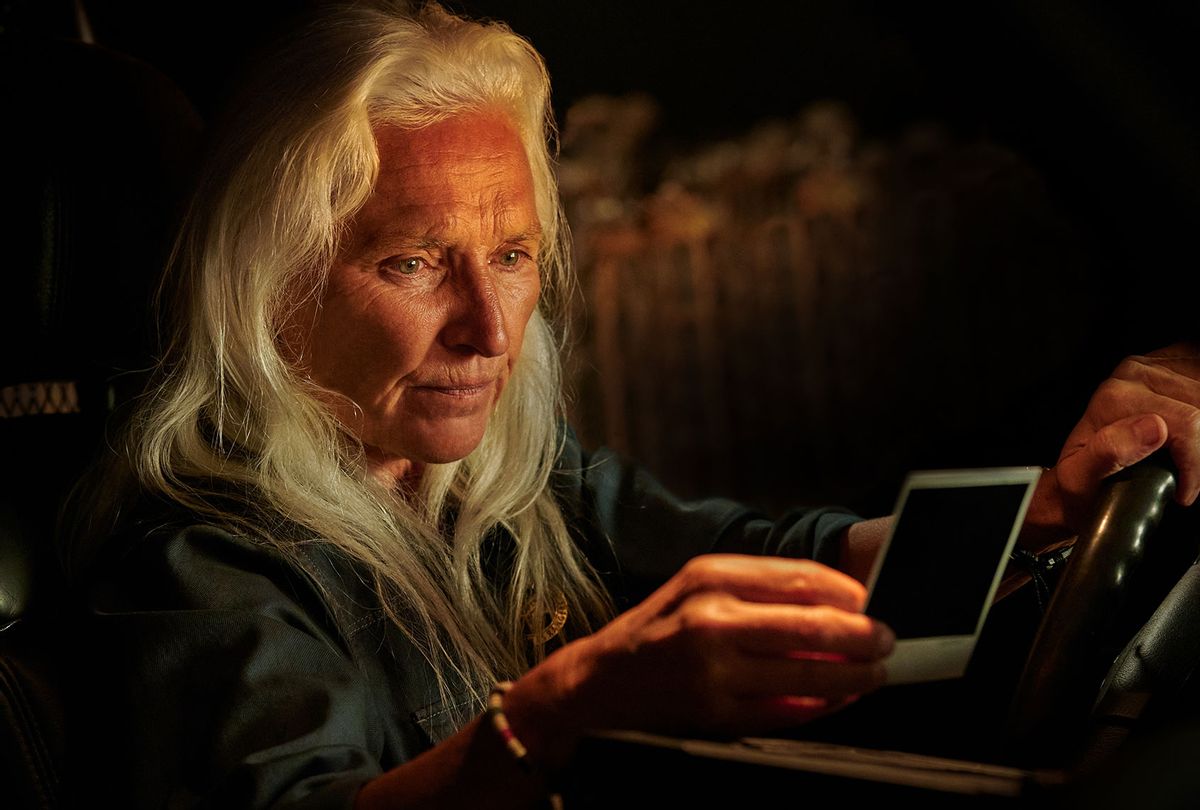 I'm not sure I can explain how much the final girl means to me.

At 22, in my first semester of graduate school and feeling way over my head with classmates who were older and smarter, I first read Carol J. Clover's "Men, Women, and Chain Saws: Gender in the Modern Horror Film." I had loved horror movies since I was way too young to be watching them, without realizing there was a name for my favorite kind of character.

There were characteristics. The one who survives a horror film, often of the slasher variety, sometimes killing the killer herself, is virginal, tomboyish. She has short hair and a name that doesn't immediately identify her as female: Jess, Sid — the kind of breezy, cool name I always dreamed of having.

Not only was there an identity for this character, there was a final girl industry. Fan clubs. T-shirts. Novels. Movies about the idea of the final girl. A graffiti artist.

"The Texas Chainsaw Massacre," the 1974 horror film that advertised itself as being based on true events (not exactly) has one such girl, Sally Hardesty (Marilyn Burns), the only one of her friends to survive after they trespass onto the land of a terrible Texas farmhouse.

To escape, she jumps through a glass window. She runs, she runs, screaming the whole time, being chased. A semi truck driver tries to save her but is chased himself. Covered in blood, she flags down a pickup truck and manages to get into the bed (despite her obvious injuries, the driver doesn't help her in). "Go, go!" she screams to the driver. Sitting in the back, in the nauseating reverse position like my sister and me in our parents' 1980s station wagon, she watches her attacker, Leatherface, and his chainsaw finally fade into the distance. Her screams turn to hysterical laughter.

Burns was known as one of the original scream queens, a title that never quite felt right to me, because it seems to have less agency than simply final girl. Though Burns was excellent at screaming, her character Sally also escaped after — as critics at the time pointed out — much more torture was done to her and to the other female character than to the men, who die quickly in the film.

I watch a ton of horror — it's what I do for fun, to relax — and "The Texas Chainsaw Massacre" remains one of the few movies to be actually terrifying, in part because the violence feels so inexplicable. The story is never explained, at least not in that movie.

A series of films followed, both direct sequels and stories set in different timelines. Netflix's 2022 film "Texas Chainsaw Massacre," is billed as a direct sequel, set in the same small Texas town and featuring a few key main characters, later in life.

When I saw a certain name and face in a faux TV news program early in the film — narrated by John Larroquette — I screamed myself.

Because Sally Hardesty is back. And she's grown.

In the Netflix film, Sally is played by Olwen Fouéré, the legendary Galway-born actor who was spellbinding in "Mandy" (my favorite film — I won't be taking questions). In this movie's timeline, sole survivor Sally became a ranger and did not leave Texas, looking for her would-be killer, Leatherface, "that maniac for more than 30, 40 years," a gas station proprietor (Sam Douglas) tells new-in-town Lila ("Eighth Grade" star Elsie Fisher).

"She found him," Lila says. It's not a question, the surety of final girls to find revenge.

But Sally didn't. Not yet. She has to grow into her role. "I fear no evil, I fear no evil," Sally repeats to herself in the new movie when she finds the aftermath of evil in a sunflower field. Her voice shakes but her flashlight doesn't. She keeps the Polaroid picture of herself and her friends, taken by a tricksy hitchhiker in the 1974 film, on her dashboard visor. She looks at it for strength, her ice-blue eyes steeling over.

"We need an officer in Harlow," the emergency dispatch says, crackling through the radio of a smashed sheriff van. "You're the only guys I have in a 50-mile radius."

But it will not be a guy who comes back to Harlow.

The decision to turn Sally into a Texas Ranger is inspired, and no one can inhabit the role like Fouéré. Physically, she looks like Burns (who died in 2014) with her piercing light eyes and long wild hair, now a glowing white. You can't look away from her, and every scene she's in, she pulls focus like a flame. But emotionally, she is Sally: an older woman who has endured great violence. Surviving has steadied the woman, not derailed her as in so many horror movies from the past.

Sally Hardesty is the final woman.

One attribute of the final girl is that the character resists sex. As mansplained in "Scream," having sex in a horror film is a one-way ticket to death via slasher. But the so-called sexual purity of the final girl may be more of a rumor than demonstrated fact; many horror movies, including 1974's "The Texas Chainsaw Massacre" don't get into the sexual history of their girl survivor at all.

So too it's a stereotype of the older woman to be sexless, undesirable. The strangest part of growing old, one of my female relatives told me, is that you become invisible. When men no longer think of you as a sexual being, many of them don't think of you at all, don't register you.

All the better time to destroy them.

In Kirsten Miller's forthcoming novel "The Change," a group of middle-aged women realize that age comes with powers too, powers of supernatural vengeance. And if there's ever a time when an ordinary woman could kill the killer, it's after her children are grown and out of the house, or in retirement when one might finally have some freaking free time. (Sally spends her leisure hours butchering hogs, so she's not rusty with the slaughtering.)

Part of the success of Showtime's "Yellowjackets" is the mirroring of the cast, showing young girls right as trauma happened and the girls as adult women still dealing with that violence, as fresh as if it occurred only yesterday. Because it feels like it did.

Trauma doesn't leave you. The scar just changes and fades — it doesn't disappear, though it might make the spot stronger. It certainly makes it different.

Put it this way. Do you prefer Taylor Swift's 2012 rendition of "All Too Well" — or the searing 2021 "Taylor's Version" of the song, re-recorded with a decade more reflection?

Although I have long loved the final girl, whose power comes from her innocence, I'm ready for a final woman, whose power comes from experience. A lot of final women. And I think movie viewers are too, based on fan reactions to Laurie Strode returning as a grandmother in the "Halloween" films, a character whose strength is not from only the moment but from a whole, difficult life spent reliving it, dealing with the fallout of having survived the unsurvivable.

Much was said early in the pandemic about how trauma survivors were strangely calm amid the chaos. We always expected something terrible. If not exactly this, then something else equally awful. Or, as my mom whispered to my dad when she opened a closet in my house in March 2020 to find it fully stocked with disinfectant wipes, hand sanitizer, bottled water and masks: "I knew she'd be prepared."

Something terrible is always around the corner, after all. Because once something was.

Although "Texas Chainsaw Massacre" offers some nice homages to the original film, including Larroquette's narration and a bloody girl the spitting image of 1974 Sally, it feels empty. Because the story that matters is not complete. The horror circle of Leatherface remains broken. Fouéré deserves more screen time — all the screen time, frankly — and the great character of Sally is vastly underused, as are Fouéré's massive talents.

We don't want the baton — or in this case, the shotgun — to be passed to another young girl. We want the final woman, the original scream queen, her face lined and her hair white, her eyes determined, the only one left of her friends forever, to have her day. The only showdown that matters is the final woman and that hulking killer who once nearly ended her. Nearly, but didn't.

Burn it all down, Sally.

Though diminutive in comparison to the chainsaw murderer, in her boots and cowboy hat, Sally casts a long shadow. So does the past. "If you run, he'll never stop haunting you," Sally says.

We are the descendants of the witches you couldn't burn, goes the popular saying found on fridge magnets and T-shirts. A better saying, more true, might be: We are the final women who lived.

"Texas Chainsaw Massacre" is available to stream on Netflix. Watch a trailer for it below, via YouTube.