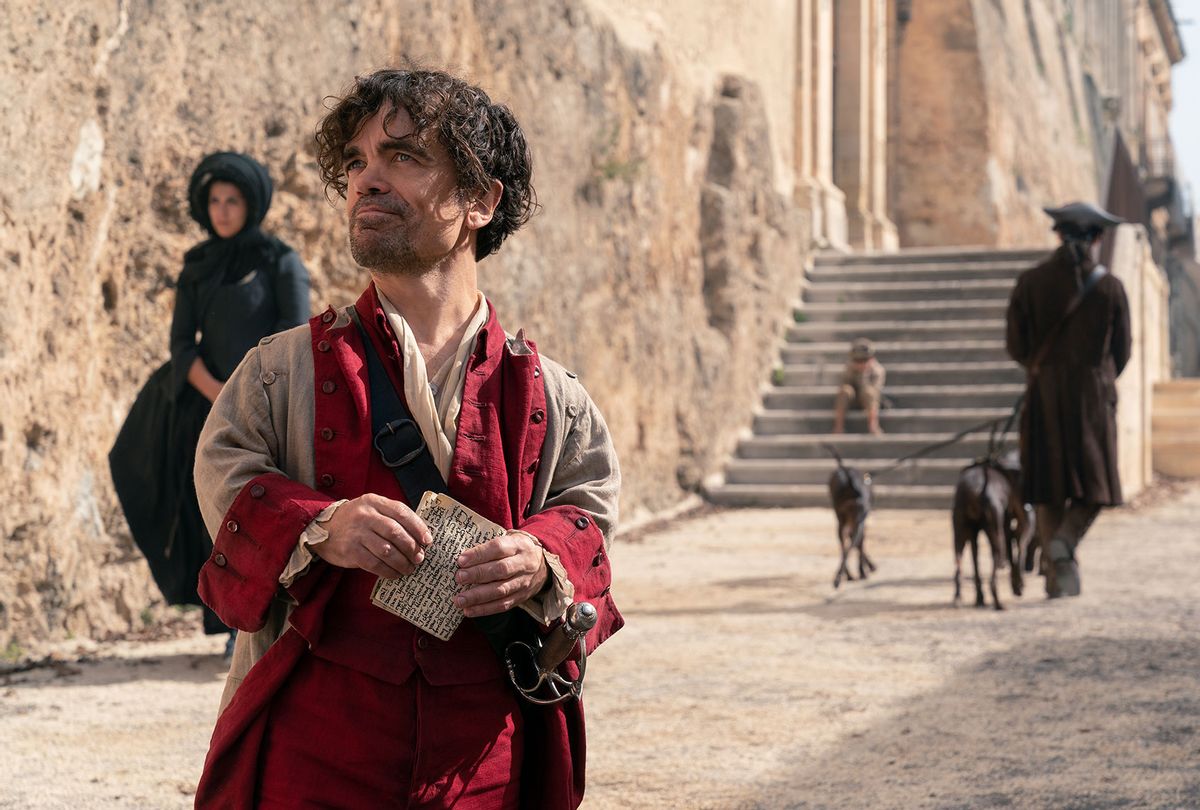 Joe Wright's "Cyrano" is an enchanting adaptation of Edmond Rostand's oft-told story, with Peter Dinklage smartly cast in the title role. (Dinklage's wife, Erica Schmidt wrote the film's screenplay as well as the musical that provides the basis for this production).

Set in the 17th century, the film has Roxanne (Haley Bennett) being courted by the Duke, De Guiche (Ben Mendelsohn), but smitten with Christian (Kelvin Harrison, Jr. of "Waves") when she sets eyes on him at the theater one night where a hammy actor emotes. Enter Cyrano (Dinklage) who punctures the actor's performance with his wordsmithing and then punctures Valvert (Joshua James) who insults the diminutive Cyrano. All the while, he winks at Roxanne, whom he loves from afar. Alas, he fears she does not return his desires. When she asks him to protect Christian, Cyrano sends Roxanne letters, posing as Christian, to show her how he really feels.

Wright, working in period mode again here films the musical numbers with the same precision as the fight scenes — one has Cyrano dueling with 10 men. He also infuses the story's key balcony scene with comic and romantic tension. The film addresses issues of pride and deceit, and provides messages about daring to be one's self, but it is Dinklage's soulful performance that is why this musical, well, sings.

Wright chatted with Salon about making "Cyrano" and his penchant for period pieces.

In what ways do you identify with Cyrano?

I think I identify with him in the sense that I sometimes have felt unworthy of love, and afraid to allow myself to be seen simply for who I am and how I am. I think that that is something a lot of us battle.

"Cyrano" is all about manipulation; the male characters all try to get what they want by manipulating others. As a director, how did you achieve your vision of this film and create poetic empathy?

I am not sure if the film is about manipulation, really. I never conceived it to be about manipulation. I thought of it being a movie about our need for human connection and how difficult it is for us to connect as people — that kind of fear of intimacy is what I wanted to bring to the audience. They are all looking for what we are all looking for, which is love of some kind. 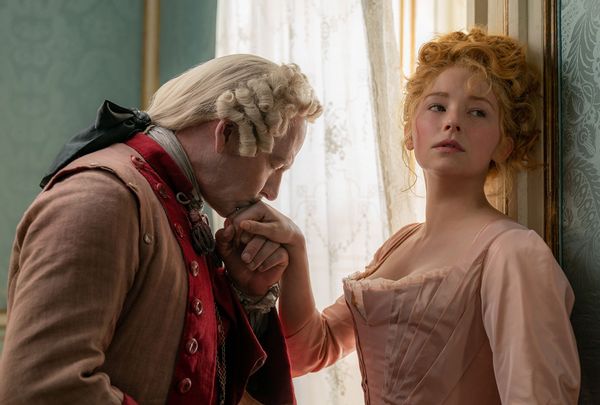 Ben Mendelsohn as De Guiche and Haley Bennett as Roxanne in "Cyrano" (Metro-Goldwyn-Mayer Pictures Inc. / Peter Mountain)How do you want people to see you? Are you a puppet-master?

I'm not pulling all the strings. That's what people think directors do, but the point of what we do is to listen to people, our collaborators and the actors, and so on, and help them to realize the potential of their imaginations. I've always preferred, in a quite pretentious sort of way, the French title of "realizer" rather than "director," who tells people what to do all the time. A realizer is someone who realizes the potential of their collaborators.

What can say about adapting a play for the screen and staging both the elaborate action scenes and musical numbers?

I find it interesting the division, the line between blocking of actors and dance and fighting choreography. I like blurring those lines and creating this fleet, physically expressive world.

The balcony scene is the story's centerpiece. Can you discuss your decisions in how you staged and filmed that scene?

Normally, I don't normally embark on a scene with any sense of the weight of precedents. Yet, somehow, with the balcony scene, I did. I'm normally working with literature rather than adapting plays. But when I found that specific location, it unlocked for me the intentions of the scene. Rather than have Cyrano and Christian beneath the balcony, I could have them by this wall, and contain Cyrano and Roxanne in a single shot.

During rehearsals, Haley [Bennett] said, "Is she really so stupid that she doesn't know that it's Cyrano speaking?" I was like well, it's the suspension of disbelief, but when we unpacked that, we discovered, "What if she knew, but refused to allow herself to acknowledge that it is Cyrano? What if she refused to acknowledge her own feeling for Cyrano?" There's a subtext that questions her own truth. When she says a line like, "How can you be afraid for yourself to be seen?" She admires him so greatly; how can he want to hide? There's a possible interpretation that she knows who it is and is waiting for him to declare himself. I try to allow space for audiences to participate with their own imagination because there are as many different interpretations of a scene as there are viewers. I want the audience to engage actively, rather than have a passive experience of being told exactly what to feel at all times — to question one's own experience because that activates their imagination.

How do you process the story's themes of love, jealousy, betrayal, and morality?

Leaving that space for imagination, as I described, for people to project their own feelings and thoughts on it. You have conceived the themes to be about jealousy, which is great — that is what you see, or need to see. My own feeling is that it is about intimacy, fear of intimacy, human connection and acceptance of difference. Those are questions that I am asking myself on set every day. How is this scene expressive of that intention? How is this scene expressive of the difficulty in human connection? Who is trying to communicate with whom, who is connect with whom, or failing to connect? Where are they missing each other, where do they think they have found each other but in fact they haven't — like in the bakery scene.

You seem to have an affinity for making period films and costume dramas. What is the appeal of this genre?

For me, what I'm trying to do is create a fantasy of a period, especially with this film, where the references are wide as 1640s, 1720s and contemporary fashion, Alexander McQueen, and so on. It's really a fantasy of the period, so actually, the music, which is always going to be modern, didn't feel anachronistic. In the medium of a period film, I am able — through the abstraction — to express human emotions, complexities, difficulties of communication and conflict, in a way that I am too bothered by reality to do when I am trying to do a contemporary film. Expressing a temporal reality feels constricting to my imagination. To strip ourselves of that, brings us closer to human experience, which is what it is all about.

"Cyrano" is a classic text. It's been made, and remade, and updated. Why another "Cyrano?" What is the contemporary resonance of the story?

It's about difference. The casting of Peter Dinklage is central to the contemporary relevance because it is about looking for our similarities rather than our differences and trying to connect with those that appear, at first, other than ourselves. With a traditional "Cyrano," with a big prosthetic nose, you are always aware that the actor can take his nose off and go have a drink at the bar, and you're in on the joke. The actor is winking at you. With Peter in the role, he brings lifetime of experience and his own defensive humor to it and his own trust or lack of trust of others to the role. I think creatively, a successful movie, is the right actor in the right role at the right time.

"Cyrano" is in theaters Friday, Feb. 25. Watch a trailer for it below, via YouTube.