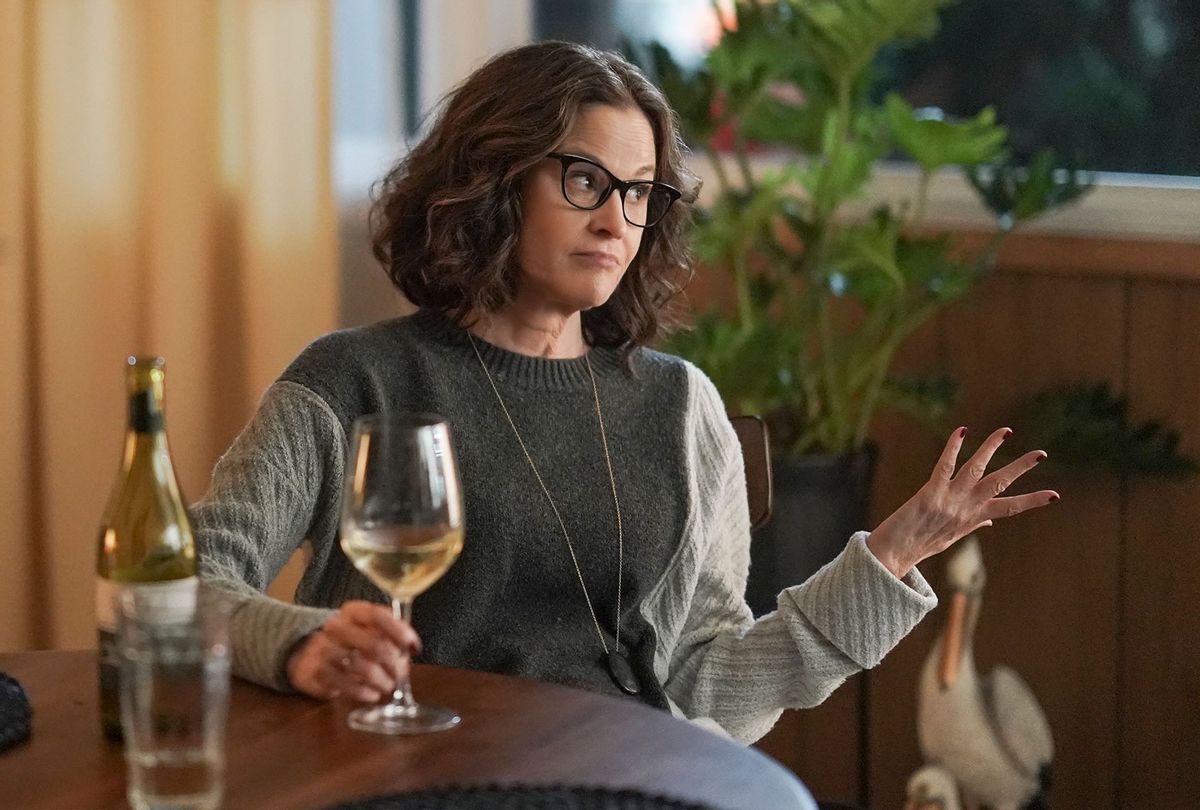 Ally Sheedy's career spans classics like "The Breakfast Club" and "War Games" to indie hits like "High Art." Now, the busy actor is costarring on the new Freeform series "Single Drunk Female" as Carol, the wine-loving mom of a newly sober adult daughter.

Sheedy appeared on "Salon Talks" recently about what she looks for in her creative projects these days, and the legacy of her iconic teen roles.

Watch her "Salon Talks" interview here or read a transcript of it below.

We see your character, Carol, first through the eyes of her daughter Sam. Her life gets pretty disrupted by Sam's meltdown. Tell me where she's coming from when we meet her.

She's a teacher. You don't really get to see a lot of that in the season, but she is. Her husband, Samantha's father, had a very long illness and two and a half years ago he passed on. Carol has been getting her life together and figuring out her life. She's in her mid- to late 50s. I am 59 so I understand this — recreating, transitioning into her new life. Then everything gets blown up because her absent daughter becomes a disaster, causes a crisis with drinking and has to move back home. Getting my world together as Carol and figuring out my life has suddenly become all about her again. That's what happening.

And she doesn't have the necessarily perfect, TV mom expected reactions to everything.

RELATED: Anthony Michael Hall on why he was "destined" to work with John Hughes

There are ways that character could have been written and played very one-dimensionally. But as we see her throughout the season, we understand where she is coming from as a fully formed adult woman in her own life.

The writing in the show is wonderful. She's written in a multidimensional way. The dynamic I have with Sofia Black-D'Elia, who plays Samantha, is alive and it's complicated. What I appreciate about the show is that the writers and the creative team have let that dynamic really define, for Carol, what's going on. Where things are going with Samantha and within myself because of Samantha are coming from that place, rather than being just thrown in. They give you a framework, and this feels like it's coming from an authentic place. It's coming from my dynamic with Sofia. I really appreciate that about the writing.

How did you develop the character?

Carol was just immediately there and alive in the writing. She made sense to me. I respond to her. I could feel her. Then I started working with Sofia on the pilot, and we were doing rehearsals. What is happening with Sofia is powerful and wonderful and juicy and complicated, because she's a wonderful actor. The way that we meshed together, what was happening between Sam and Carol, gave me more and more of an understanding of who Carol is. There was a depth and dimension, and that has so much to do with Sofia.

When you approached this character, were you thinking about what her history was, what her relationship with drinking was? There's that scene where she's just holding a glass of wine and saying, "It's hard to be a person."

She's been through a lot. She's still in the middle of grieving my husband who died and my own feelings about how Samantha did or did not show up for that. Making my life, doing my whole thing. I think for Carol having a drink, having wine, has always been something. It just softens the edges and it's something that she does at night. She doesn't drink like Samantha did.

This thing about Samantha suddenly coming into the house, this is not said in the script, but it's going on with me in my head as Carol. I feel like, "She's coming in with her problem, but I am not changing what works for me because of her." There's the friction right away. "She's got to do her own thing and get herself together. I don't even know if I believe in the alcohol thing with her. I don't even want to go there, but don't come in here and tell me I can't have my wine at night, period. End of story." That's where we start from.

It all feels so true because of course the show is grounded in creator Simone Finch's real life experiences.

For a long time, there was a lot of celebration of female drunkenness as kind of a shorthand for empowerment. The show starts where you think that might be what this is about. What do you think it is about this moment we're all living through, where a lot of us really are reassessing our choices?

Simone's own experience is what mostly informs the storytelling. There is something that's resonating in the show. The show is not about a pandemic, but everybody in the show, every character, there's a transition happening. There's what life was and now where life is, and where are we going to go? That's happening with every character in the show each in their own way. I think something resonates about that.

We're all trying to get our feet under us again. Things look different, and things are not the way they used to be. There's been huge changes, so there's a little bit of a disoriented feeling. Somehow the writing captures that in the episodes. Nobody seems to be on firm ground. Everyone's going through some kind of life change, without it becoming soap opera-y at all. It's actually gritty and funny. All the characters are moving through something in their lives, and they're not really sure where they're going or what's going to happen.

One of the other things that makes this show unique is just how female driven it is. Driven in its voice, in its storytelling. In not just the main character, but also so many of the supporting characters.

Ally, I found a quote from you from an interview that you did 30 years ago. You completed the beginning of a poem, "I think that I shall never see.…" Do you know how you ended it? "A good woman's role in a film that makes money."

Did I say that?

What does it feel like now looking around, not just at the success of a show like this, but the culture in which there is space for other kinds of successes like it?

There are so many options of stories that one can watch. It isn't the way it used to be where you had to watch what was on one of the main networks and that was all there was. Now there are so many different platforms that there are so many stories that are being able to be told. Brilliant stuff like "I May Destroy You." Things that are not going to come out there and be some big movie that has to make a certain amount of money, but it's going to have its own audience and the audience will easily find it. You don't have to go to an art house to see an indie film. You can find this stuff on your laptop or your TV or computer.

There's just so many more stories being told. That means that there are so many more stories being told that are about women, because there are more options and there's a broader playing field and there's an audience for it. It's completely different then it used to be, but there's brilliant stuff out there. I love watching female-driven shows. That's always the stuff I look for.

And you are a very picky actor. You take time off. You seem to be drawn to stories that are told by women or have a strong woman's hand in it. Is that something that you were very intentional about later in your career, because that's not necessarily where you had the option of starting?

There's a different flavor to that than reading a script that's very often written by a man where the woman is a secondary supporting character. That's another ballgame. There are a lot more women writers. There's a huge playing field now. The writers' room on our show does not look like the way writers' rooms used to look at all. At all. I think that's the reason that the characters are so full of life, and there's so many of them and they all fit together. There's voices in the room that didn't use to be in the room.

That also seems to be reflected in the chemistry of the cast. I saw an interview where you said that you see this as a show about a mother and a daughter.

Most of the people who you're acting with are of a different generation. Millennials love and respond to your earlier films and the films of that era — those John Hughes movies, movies like "War Games." What do you think it is about that period, that time in cinema, that part that you played in it, that still affects people so deeply?

I don't know with all the different movies, but I do know that there's this continued appreciation for "Breakfast Club." They'll look and say, "Oh, that was my high school experience," or something. I don't really know. I actually don't have an answer to that question. I don't know why those films resonate. I would think that for somebody my age or somebody in my age bracket they would resonate just because you remember. I remember being my 20s. I remember the '80s. There's a nostalgic feeling. But why those movies speak to young people I have absolutely no idea. I really don't.

At the time, you couldn't possibly have imagined that you would've been creating something.

Are you hoping that maybe in 30 years, this show is a time capsule of a post COVID moment in the new sobriety?

I don't know. I loved doing this season and I just would love us to be able to do another season of it. I'm not really thinking beyond that. I guess in 30 years, not just this show, but a whole bunch of the things that are on right now, are going to be seen as the shows that got made during the COVID time, which nobody will ever forget,. It's going to have repercussions for a very long time. There is a bunch of work right now being done. Some of the shows actually incorporate COVID into them, like "And Just Like That" did. Some of them are just what's in the air, what's the zeitgeist right now? What are we doing? What kind of stories are we telling? It'll be interesting to see.

Do you feel making this show in that moment for you as a cast gave it something different, a sense of closeness or intimacy that you might not have otherwise had?

I got to have my scenes with Sofia, and we're living in a time where I was in the hotel by myself. The only person I would see would be my brother who's vaccinated. Finally being able to be in a room, actually relating with somebody, having some kind of interaction, was joyous. It was work and it was Sofia, but add onto that, also, it was finally talking to somebody in person.

"Single Drunk Female" airs Thursdays on Freeform and streams next day on Hulu. Watch a trailer for it below, via YouTube.