Zac Efron is worth his weight in "Gold," a harrowing thriller about greed and survival

The actor shoulders most of the film, which situates him in the desert after discovering a massive amount of gold 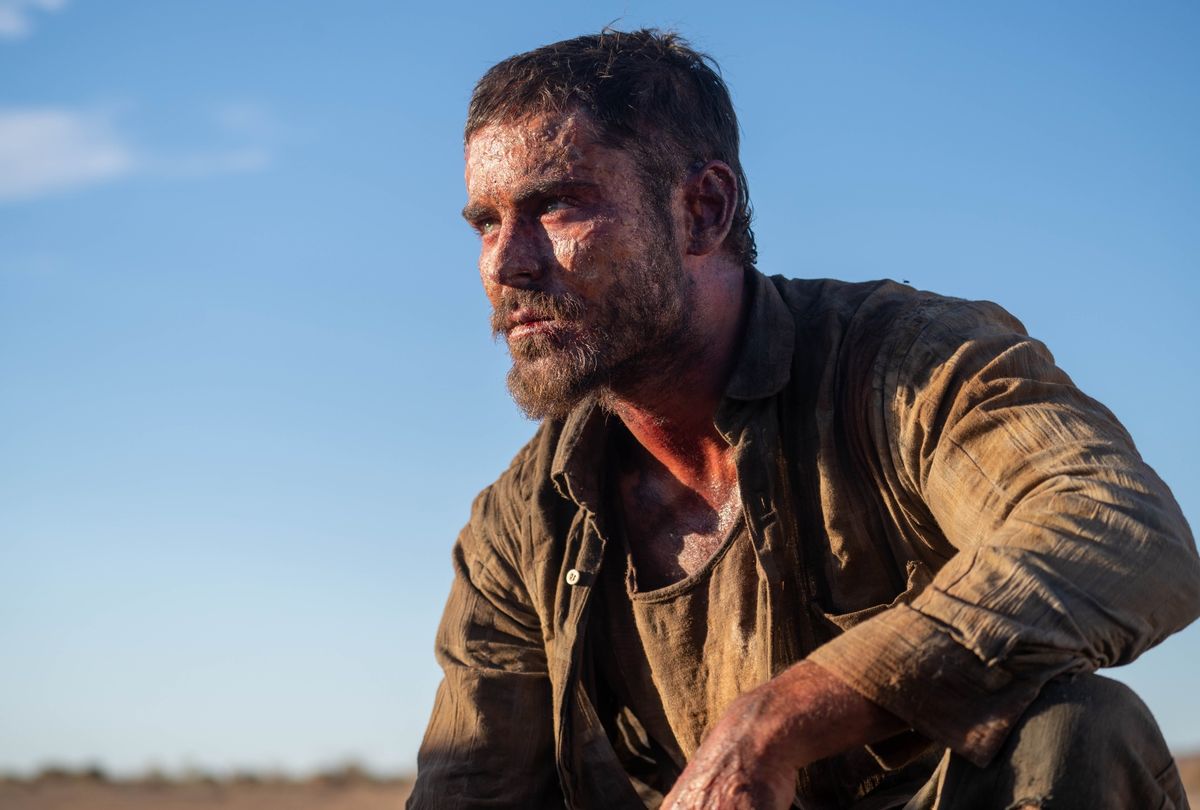 At the end of Erich von Stroheim's classic 1924 silent film, "Greed," two men are stuck in Death Valley with money they both want just out of reach. It is easy to think that Anthony Hayes had this film (and this scene) in mind when he cowrote and directed "Gold," a rugged new thriller about two men, the desert, the title element, and, of course, greed.

The film is set "some time, some place, not far from now." Man 1 (Zac Efron) is first seen riding in a boxcar. He is a good man, as illustrated by his giving food to a crying baby. As he arrives at a station, he is in search of Man 2 (Hayes), who will take him to "The Compound," which is a long car ride away. Man 1 walks with a limp and has a vacant look in his eyes. He keeps an air of mystery about himself — refusing to explain the scar on his weathered face — but he does reveal that he is going to The Compound after seeing a flyer that reads, "In four months, you'll be a changed man." Man 2 questions this decision, telling him that he will work hard, for long hours, and be a target.

"Gold" establishes an uneasy dynamic between these two strangers in this first act by their unspoken game of one-upmanship. (Man 1 insists he can change a flat tire by himself.) But when their car overheats in the middle of nowhere — because Man 1 didn't listen to Man 2 about the air conditioning — Man 1 spies something shiny in the dirt. As Man 2 verifies, it is gold! And as these strangers dig the nugget out, they come to discover that it is quite massive and will require the assistance of an excavator. The question becomes: who will go fetch the excavator, a four to five-day job, and who will stay and protect the gold? 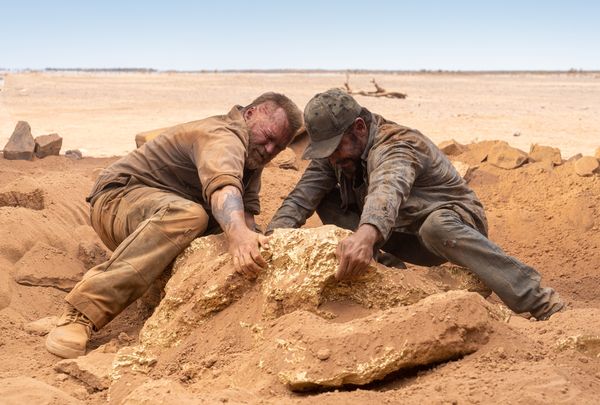 Anthony Hayes and Zac Efron in "Gold" (Screen Media)Man 1 decides to stay, despite Man 2's reasoning for him not to. And the film's second act provides Efron with a one-man showcase of him against the elements. ("Down to Earth" this is not; more like "All Is Lost" on very parched land.)

"Gold" follows the very predictable survivalist narrative, with Man 1 creating some shade, gathering kindling for fire (to keep the howling dogs away), and safekeeping his precious resources (water, a satellite phone.) He encounters dangers such as a scorpion and a snake, but also finds a downed airplane that helps him create shelter to protect him from the unforgiving heat.

It is all compelling because Efron has a real screen presence even as his skin blisters and cracks on his hands and face. (The makeup by Jennifer Lamphee is convincing.) He doesn't shoo the flies that crawl on his face, creating a sense of realism. Efron also does not have many lines of dialogue in the second act, mostly uttering the F-word, as when he accidentally wastes some water. (It was bound to happen.) Every so often, his action is interrupted by calls from Man 2 recounting a delay. It only makes his situation grimmer.

Hayes' film is very atmospheric, especially during these desert scenes. The sense of isolation and the heat are palpable. Hayes and cinematographer Ross Giardina utilize the barren environment — played, obviously, and excellently, by the Australian outback — imbuing the images with a monochromatic tone. It makes a sequence of Man 1 in the dark, illuminated only by fire stand out. There is also an impressive dust storm sequence.

"Gold" may have Man 1 wait out the seemingly endless days alone, but the film never feels dull, which is to its credit. At some point, Man 1 gets some unexpected company in the form of The Stranger (Susie Porter) who has questions about how he arrived, does he want food and water, and what is he hiding. Their interaction sets up the film's third act, and of course, it involves a different kind of survival.

As good as "Gold" is, however, in setting up its scenario about greed and morality, Hayes' film feels a bit shallow. Man 1 does not have much of an existential crisis alone in the desert even when he is faced with critical life-or-death situations. And when the possibility that Man 1 is hallucinating is floated, it feels perfunctory.

Hayes also fails to generate much suspense as the story builds to its dramatic conclusion. He wisely does not show Man 2 after he leaves Man 1 alone, but of course one can expect that he is returning to dispatch Man 1 (if he is even still alive) to keep the gold for himself.

Nevertheless, Efron delivers an engaging performance and rises to the occasion of being in every scene, and alone for about half of the film. His expressions and tempered body language convey Man 1's determination, and it is easy to see why the part appealed to him; this is not a vanity project. Efron is displaying his acting talents not his good looks. He does not even take his shirt off during the film, but he does raise it up to tend to a wound he suffers. Alas, there is a glaring continuity error as the projectile shifts from the right side of his body and back to left over several scenes, which is distracting.

Even with its flaws, this "Gold" is worth discovering.

"Gold" is in theaters March 11. Watch a trailer for it below, via YouTube: