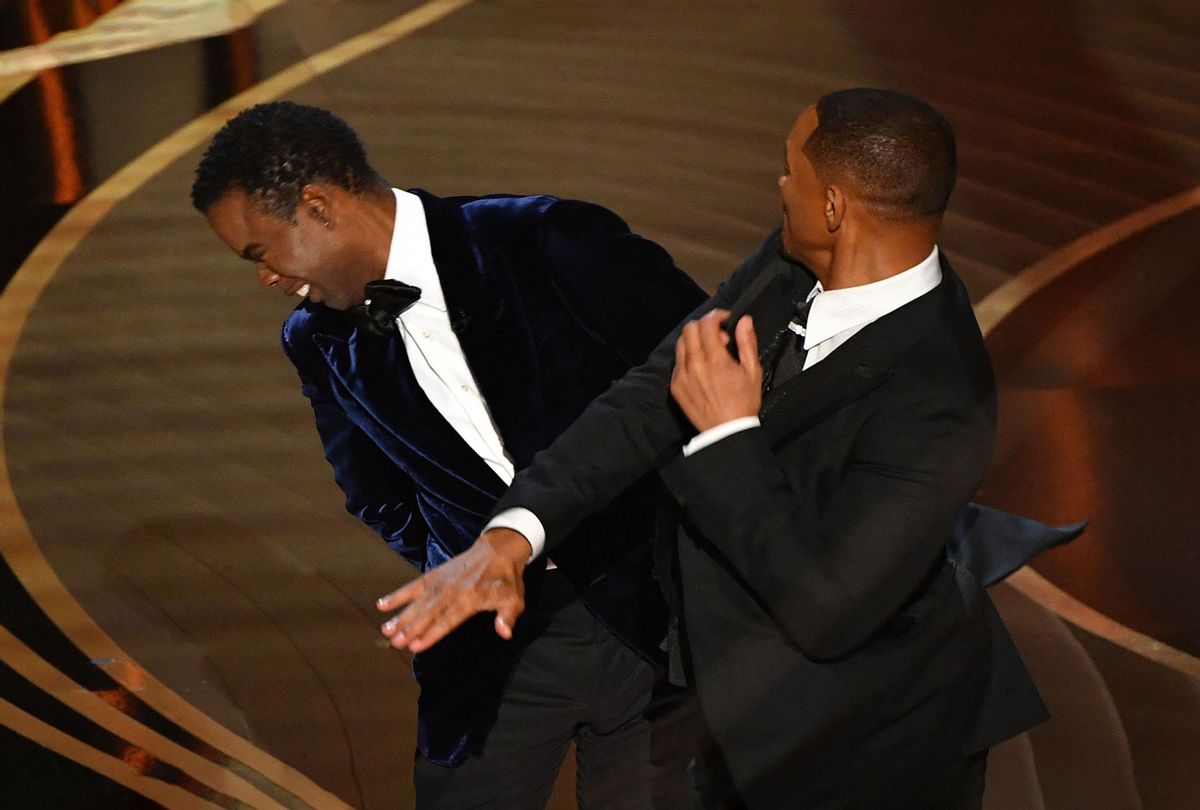 US actor Will Smith (R) slaps US actor Chris Rock onstage during the 94th Oscars at the Dolby Theatre in Hollywood, California on March 27, 2022. (ROBYN BECK/AFP via Getty Images)
--

If you teach a Monday morning class on comedy writing, like I do at Georgetown University, then Sunday night's assault and battery on comedian Chris Rock at the Oscars provides some really ace material for "class discussion." It's like teaching a course on "Space Exploration" the day after Neil Armstrong bopped astride the surface of the moon. Actually, it's more like teaching a course on "Nuclear Weaponry" the day after someone lobbed a missile into your campus.

Let's start with the generational divide that the incident brings to the fore. I was disheartened, but not surprised, to learn that every single one of my 15 freshman students – bright, thoughtful, people – felt that Mr. Rock's joke should never have even been pronounced. They concurred that the quip about "G. I. Jane," in reference to Ms. Pinkett-Smith's very dignified and public experiences with alopecia, was triggering and unfit for the Oscars. Many, though not all, found that the punishment fit the crime; Will Smith emerged as an avenger of a microagression. Take a look:

Maybe a younger version of my professorial self would have torn into The Youth for expressing such anti-liberal sentiments. But the older me recognizes that there's nothing more banal or cliched than a professor ragging on undergrads, if only because that is precisely what professors have been doing since the foundation of Heidelberg in 1386.

RELATED: "Comedians are in danger everywhere": "The View" hosts side with Chris Rock after on-air Oscars slap

And besides, the opinions they expressed were not unfounded. They are right; technically the joke was not particularly good. They are correct, in a country that stigmatizes Black women's bodies and looks and voices and hair – the comedian was punching down. One student helpfully suggested that had Ms. Pinkett-Smith delivered the blow herself, she would have become a feminist icon; her intervention would one day be memorialized on a postage stamp.

Too, my students' protest aligns with what recent research demonstrates about a growing generational divide regarding free speech. A 2015 study showed that Millennials were much more likely than the generations who came before them (i.e. Gen Xers, Boomers, and Silent) to let the government censor speech acts that are offensive to marginalized groups. The trend seems to be intensifying among Gen Zers, the cohort professors are teaching today. When given the choice between "protecting free speech" and "promoting an inclusive society" significant numbers of college students favor the latter. One study showed that roughly 60% of women and 60% of Black people see inclusivity as the more important goal.

As my classroom anecdote above may indicate, this generation is far less committed to untrammeled expressive liberty than their elders. Those on the business end of the Art/Commerce divide, are surely taking note: if a younger generation doesn't like this style of comedy – and here one thinks of the controversy surrounding Dave Chappelle's "The Closer" – then what does this portend for future investments in comedic products? Smith's slap was, inadvertently, a warning signal to entertainment executives.

About that slap. I have no expertise in the semiotics of the slap, but I am reminded of what one of America's funniest novelists, Paul's Beatty, made of the gesture. In his underappreciated masterpiece, "Tuff," Beatty relays an episode in the life of East Harlem resident Winston "Tuffy" Foshay. Tuffy is a very, very large man who engages in an exhibition bout with a professional Sumo wrestler named Kotozuma. The latter has just administered a Sumo-specific, Sumo-appropriate, slap to the former. The blow propels the narrator to voice this reflection (which may be triggering):

But in the streets [of East Harlem] to be slapped in front of anyone who even remotely knows you is the ultimate insult. Mothers slap children, wives slap husbands, pimps slap hos, but nobody slaps Winston, and before Kotozuma could release a follow-up smack, Winston blasted him with a "What, motherf**ker?" two-handed push to the chest that sent the rikishi reeling backward.

My street fightin' days back in Flatbush Brooklyn are far behind me, and were, nevertheless, unremarkable in the extreme. Yet something about Mr. Smith's getsure struck, even me, as not quite right. He missed a step in the tango of toxic masculinity. A belligerent man, in my experience, generally signals to his target that he is about to hurt him. There are lots of ways to communicate this malign intent. You can get all up in someone's face. The two-fingered chest poke is a well-worn technique. Some aggressors have been known to deliver pointed monologues prior to pouncing.

But one thing the Code Of The Streets demands is that a combatant never hit a person who, like Chris Rock, had his hands behind his back (Mr. Smith delivered his monologue only after his attack). Couldn't he just have pushed Rock backwards and let the dudes with the headset mics come charging out from the wings, "Jerry Springer"-style, to separate the combatants? Where are these guys when you need them?

The entire episode also cast light on a disturbing global trend. The docket of incidents that could be labeled "When Audiences Attack" (to use Jim Jeffries' phrase) is thickening. Last spring authorities in Mynamar arrested the satirist Zarganar. Around the same time the Muslim comedian Munawar Faruqi was detained in India afor offending Indian Hindu sensibilities. Unappreciated satire led to the murder of Charlie Hebdo cartoonists in France (and, in fairness, one could say that similar unease with humor led to the fining and imprisonment of the antisemitic insult comic Dieudonné M'Bala M'Bala). As for "Nuclear Weaponry," North Korea threatened to obliterate California in retaliation for "The Interview."

Comedians, I tell my students, usually want to get high, make people laugh, make people think, and make some money (though not necessarily in that order). Yet their art form, with more immediacy than any other, makes a demand – a demand which not all of them signed up to fulfill. The function of comedy is to help us see where the ever-shifting boundaries separating appropriate from inappropriate presently are situated. As they perform this service, comedians often risk their mental health, freedom, and bodies. Mr. Rock took one on the jaw. In so doing, he showed us all where comedic lines have been repositioned, and where growing fissures are emerging in contemporary America.

More stories about comedy and consequences: