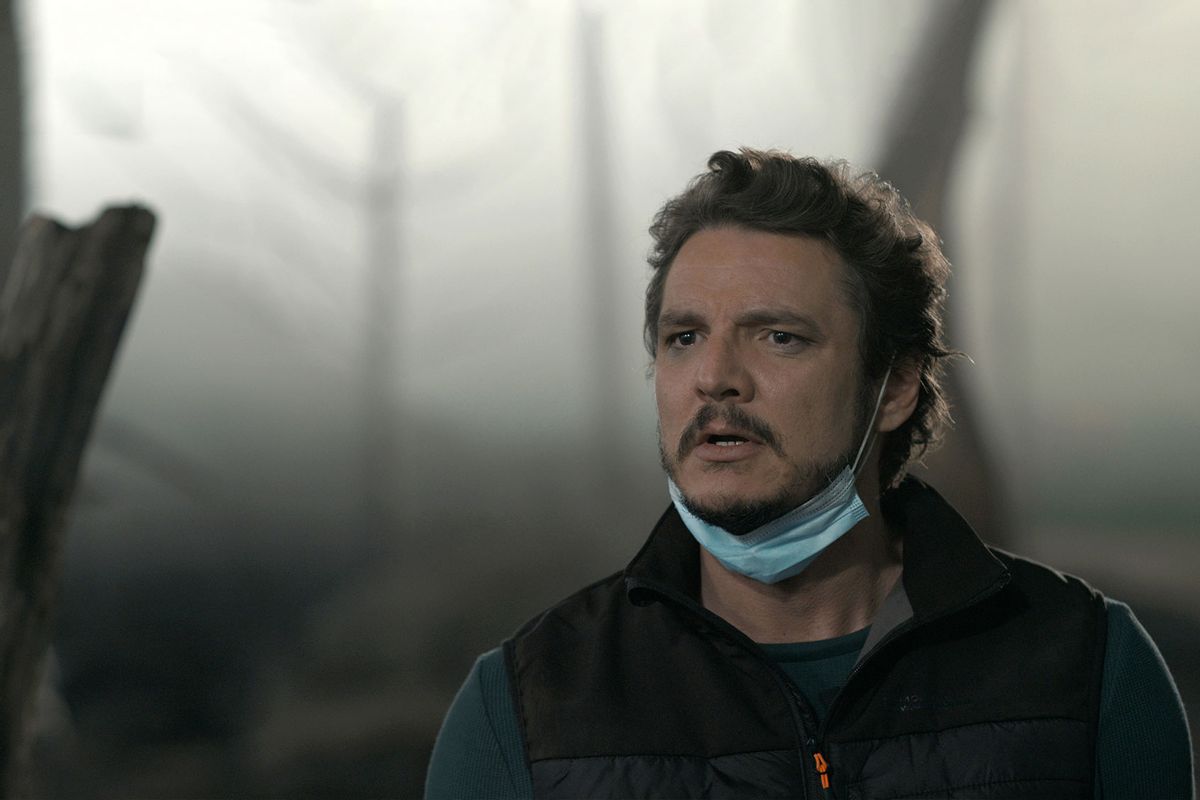 Pedro Pascal as Dieter Bravo in "The Bubble" (Courtesy of Netflix)
--

In "And Just Like That" it was a jarring misstep (in a show of mostly missteps): assuming that, by the time the show aired, COVID would be over. "Remember when we legally had to stand six feet apart?" Carrie asks in the first episode, as if anyone would forget. In the whole season, no one wears a mask in New York City, or has a mask around, including at a large funeral.

At least that's something that "The Bubble" gets right. The first image of a masked Karen Gillan, playing an actor named Carol, greeting her agent awkwardly and backing away from a hug feels like a jolt of recognition. The removal of the mask while seated in a restaurant, putting it on the table like an extra place setting, black-masked waiters in the background  – all familiar.

But then, things quickly start to go wrong. "The Bubble," Judd Apatow's new Netflix film, tells the story of a blockbuster movie's cast and crew, holed up in a hotel as they attempt to shoot their film during the pandemic. Being stuck inside is where the similarities end (they're not even stuck for long). Celebrities are not just like us in "The Bubble." And they're not anyone we can root for.

Apatow allegedly based "The Bubble" on a story about "Jurassic World: Dominion" told to his wife, actor Leslie Mann, who appears as an actor in the movie. Shot over an unprecedented 18 months, with the pandemic beginning in the midst, "Jurassic World: Dominion" required its cast and crew to be sequestered in England. The movie cost 165 million dollars and took 40,000 COVID tests.

It's hard to anticipate in art what the next stage of the pandemic might look like, if it will end or evolve or be endless.

The film in "The Bubble" is titled "Cliff Beasts: 6," and the rugged and colorful athletic costumes of the cast recall the "Jurassic" franchise, as do the beast themselves, which are basically flying dinosaurs: top-heavy with tiny arms. It was also the sixth "Jurassic" film that was bogged down with so many issues, "Lost in La Mancha"-style.

"The Bubble" feels achingly familiar at first: Carol's mask and the masks on everyone on set — I'm not sure I've yet seen so many masks on screen before. The face shields and awkward testing. The chair placed a distance from a producer Carol speaks to, the muffled voices.

It's both startling and something approaching refreshing to see a film depict COVID this way, especially after the willful and wistful thinking of most shows like "And Just Like That." It's hard to anticipate in art what the next stage of the pandemic might look like, if it will end or evolve or be endless.

They're basically riding out the virus in "Downton Abbey."

Rather than engage in weird projecting like the measles panic of "You," which tried to talk about COVID without ever talking about it, "The Bubble" wisely sets its story smack in the early days of the virus before a vaccine (well, before a vaccine for anyone but "rich people" like Kate McKinnon's Zooming-in studio head). That's where the refreshing nature of the film ends, however.

The cast is quarantining and will be posted for the remainder of their film at a gorgeous and sprawling English country estate. It's a mansion with terraces, topiary gardens, a doting staff and every whim catered to, including weed flown in. They're basically riding out the virus in "Downton Abbey." 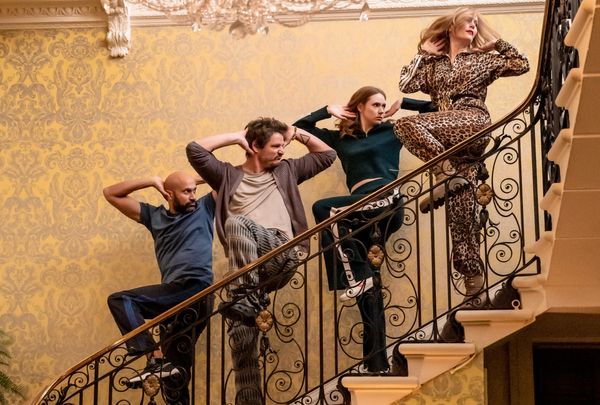 Keegan-Michael Key, Pedro Pascal, Karen Gillan and Leslie Mann in "The Bubble" (Netflix)So, when the characters groan about a positive COVID test from the girl who fetches all their coffees, it rings less true. Yes, they will be confined to their rooms, but their rooms are suites with velvet couches, floor-to-ceiling windows and flat screen TVs. The one griping that feels real? When Mann's character protests that her room only has a shower, not a bathtub.

But this is certainly not the claustrophobic longing for green space, an apartment with a balcony or even a fire escape. As the BBC wrote in the first summer of the pandemic, "access to green or open space is often linked to income, particularly in cities. COVID-19 has placed this issue front and centre: those with access to balconies, gardens or good, close neighbourhood parks have been benefiting from them during weeks of lockdown, while others have been trapped."

The characters of "The Bubble" also have endless food, which someone else prepares and cleans up for them. During her initial quarantine, we see Carol consume a steady stream of junk food. But that's not an issue, even for an image-conscious actor, because she and the others also have endless workout opportunities, including hand weights and kettle bells in their rooms and those fancy interactive fitness mirrors (that's going to become a problem for Pedro Pascal's burnout, sex-addicted character, probably the best in the film, wandering the ornate halls of the country house in his bathrobe like "The Dude").

The issue with telling a meta tale is that it can feel pretty indulgent, can keep referring to itself until it swallows itself.

Yes, it's a spoof but it's hard to care about any character when their advantages are so widely inflated. And still, they complain. Like petulant children, they also don't follow the rules, which takes on new meaning when you're talking about a deadly pandemic in its infancy. They "break the bubble" to have casual sex. The youngest of the cast and crew run off to London for an urban adventure, endangering everyone. Not only do the struggles of the characters not seem real, they don't seem sympathetic.

The story of "The Bubble" starts to have the very problem it's dramatizing: it drags on for a really long time, seeming much longer than its already long 2 hour, 6 minute running time. Nothing happens. Nothing happens again. The issue with telling a "meta" tale is that it can feel pretty indulgent, can keep referring to itself until it swallows itself. "People don't want to hear celebrities complain," the youngest member of the cast says. It's the truest line of the film.