Between the measles and COVID, "You" makes a bizarre creative decision that doesn't make sense

As TV series try to figure out whether to address the pandemic or not, Netflix's thriller shows how not to do it 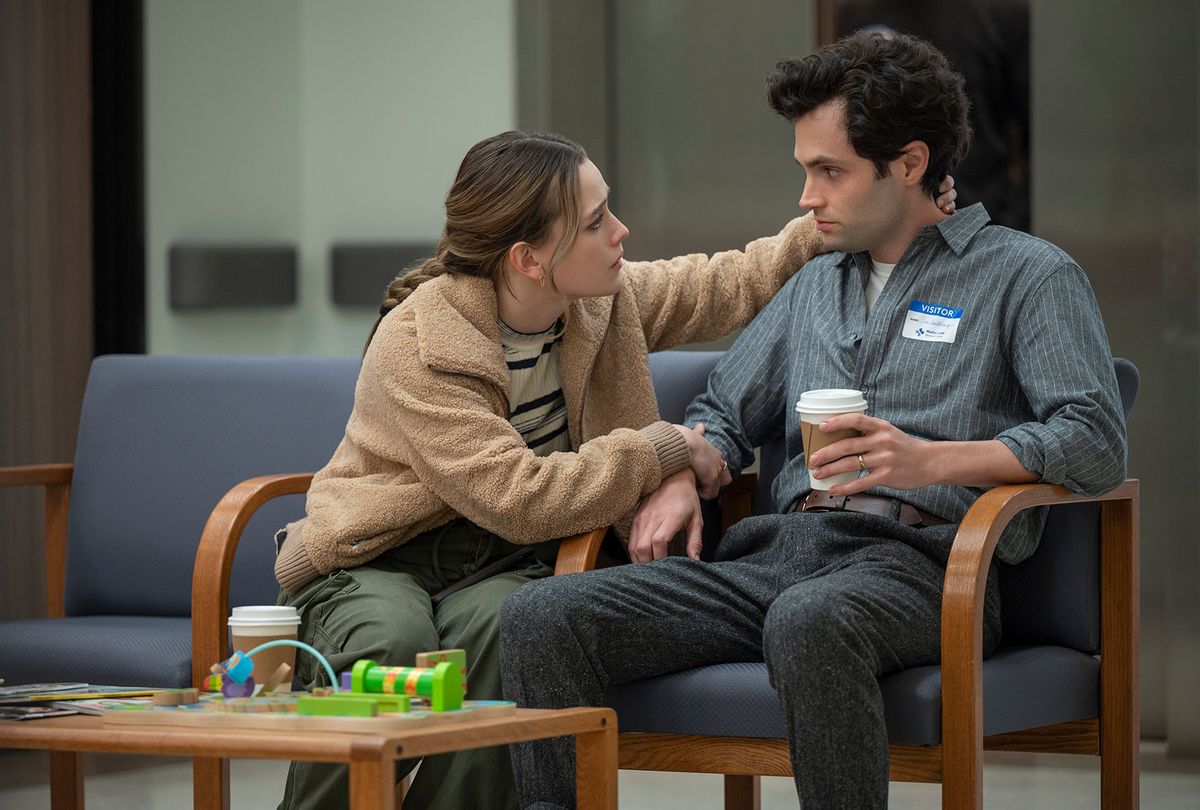 Victoria Pedretti and Penn Badly in "You" (John P. Fleenor/Netflix)
--

Incorporating real-world events into existing pop culture is not a decision that should be taken lightly. And yet shows everywhere, from "Grey's Anatomy" and "Superstore" to "This Is Us" and "Big Sky," have felt the effects of the COVID-19 pandemic (or name-dropped them) in some way or another over the last year.

While the decision to include the pandemic makes sense in some cases — medical dramas like "The Good Doctor" have reason to address a significant real-world event that affects healthcare workers — most shows do not and thus can skate by without ever addressing it. And yet, some simply refuse to do so.

One of the strangest offenders of this is Netflix's addictive thriller "You." In Season 3, Joe (Penn Badgley) and Love (Victoria Pedretti) — who is just as dark and twisted as her new husband — live in Madre Linda, a fictional Bay Area suburb built from tech money with what appears to be an updated and darker blueprint for Wisteria Lane. The season follows the couple as they attempt to navigate the waters of parenthood and marriage behind a white picket fence despite the fact neither has a frame of reference for a comforting or well-adjusted home.

While the pandemic doesn't play a major role in this overarching narrative, it is referenced a few times, the first instance coming in the season premiere. When Joe and Love attend a party at the home of their neighbor Sherry (Season 3 newcomer and scene-stealer Shalita Grant), Joe mentions the time their host — an influencer in the mommy blogger space — had to post an apology video after it was discovered she'd hosted a massive party in August 2020 while everyone else was at home "clutching hand sanitizer." Joe also mentions in his trademark voice-over that there was a rumor the elite of Madre Linda had gotten their hands on a secret vaccine "manufactured for the Queen of England" and were thus "immune to COVID."

READ MORE: How watching TV in lockdown can be good for you – according to science

It's a quick aside that exists to tell us more about Sherry and the people who call Madre Linda home. But it also speaks to the unfair advantages of being rich and the division between the haves and the have nots that has existed in some form each season, whether the former are wealthy hipsters in Brooklyn, wellness gurus in Los Angeles, or tech entrepreneurs in the Bay Area.

Joe's comment is one way "You" attempts to position its dark and violent antihero — who still considers himself the ideal romantic partner — as an outsider in his new home despite the fact viewers know that he fits in perfectly with all the liars who put on happy fronts to cover up what goes on behind closed doors. But it's also a perfect call-out of a gap that has only grown wider and become more evident as the pandemic has disproportionately affected low-income earners as the wealthy have remained unaffected. However, it also creates unnecessary problems for the show.

By acknowledging the pandemic, even in passing, "You" has effectively shattered the barrier between viewer and subject, a barrier that has — until now — allowed fans to comfortably view the deliciously demented exploits of the show's morally compromised lead from a relatively safe and manageable distance. It's this barrier that has allowed viewers to "root" for Joe despite his undeniably horrific actions.

This change now positions him (and Love for that matter) as someone who exists in our reality and could be our neighbor rather than an exaggerated character from a television show carefully constructed by piecing together dangerous personality traits with the goal of providing entertainment and tearing down romantic tropes in surprising ways. While men like Joe almost certainly do exist, no one watches "You" expecting dramatic realism — it is, like so many other TV shows, a form of escapism. So to suggest that the pandemic has occurred in this reality doesn't just break the barrier. It actually threatens to take viewers out of the story and force them to engage with trauma unnecessarily. This is a problem if the ultimate goal of any Netflix show is to keep viewers bingeing until they run out of new episodes. However, there are narrative issues at play as well.

It's clear even without Joe's cues that the third season of "You" takes place in a post-pandemic world; men and women gather together without worry and masks are absent from the streets of Madre Linda. So why, then, does the show bother acknowledging the pandemic at all? It has no direct effect on this season's storyline as it unfolds, so why have the writers chosen to reference it and open this box unnecessarily?

One could forgive them if this were part of a larger, targeted attempt to engage with or make a pointed statement about anti-vaxxers and the harmful ways in which misinformation and inaction have the potential to affect everyone. A storyline like that is tailor-made for a season-long send-up of excessive wealth and pseudo-health in Silicon Valley. And "You" does, in fact, tackle vaccination this season. But it swaps out COVID-19 for the measles in a storyline involving baby Henry and Joe both contracting the disease from an unvaccinated family in town.

The development quickly sends Love down another dangerous path while Joe unlocks more of his traumatic past. It's a thinly veiled commentary on the anti-vaccination movement that has set the U.S. back dramatically in its ongoing fight against COVID-19. But including the measles after weaving the pandemic into the fabric of this world just underscores how unnecessary it was for the show to acknowledge COVID at all. Perhaps if the writers had committed fully to the inclusion of the pandemic with the vaccine storyline or further integrated it into the narrative by addressing the psychological effects the experience had on its characters, who are already laden with trauma, the story might have been more effective. As it is, the pandemic matters very little to "You," its universe, and the story it's telling.

This stands in contrast to a show like Apple TV+'s "The Morning Show," which after tackling #MeToo in Season 1 has incorporated COVID-19 into its second season. For reasons that remain unclear, the show is taking all of its cues from HBO's much-derided Aaron Sorkin drama "The Newsroom." But at least it has the proper tools to address the pandemic. "The Morning Show" is a series about a morning talk show, so incorporating newsworthy real-world events fits within its narrative structure even if there's no obligation for the show to actually be topical. The same cannot be said for "You" (or the majority of other TV shows) as it has no perceived responsibility within the narrative to protect or inform the public as part of its story.

With several episodes still to air, it remains to be seen how "The Morning Show's" COVID-19 storyline will eventually play out and whether the series will add something of substance to the cultural conversation or become a quickly forgotten footnote in TV history. But at least it affects the characters and the overarching narrative and thus has a purpose. As it stands, "You" has incorporated COVID to such an odd degree — a reference in the finale to people fleeing New York feels even more silly in light of the season's arc — that one can only hope the days of TV shows including the pandemic will soon be behind us. Because for a show about obsession and murder, "You's" COVID storyline was dead on arrival.