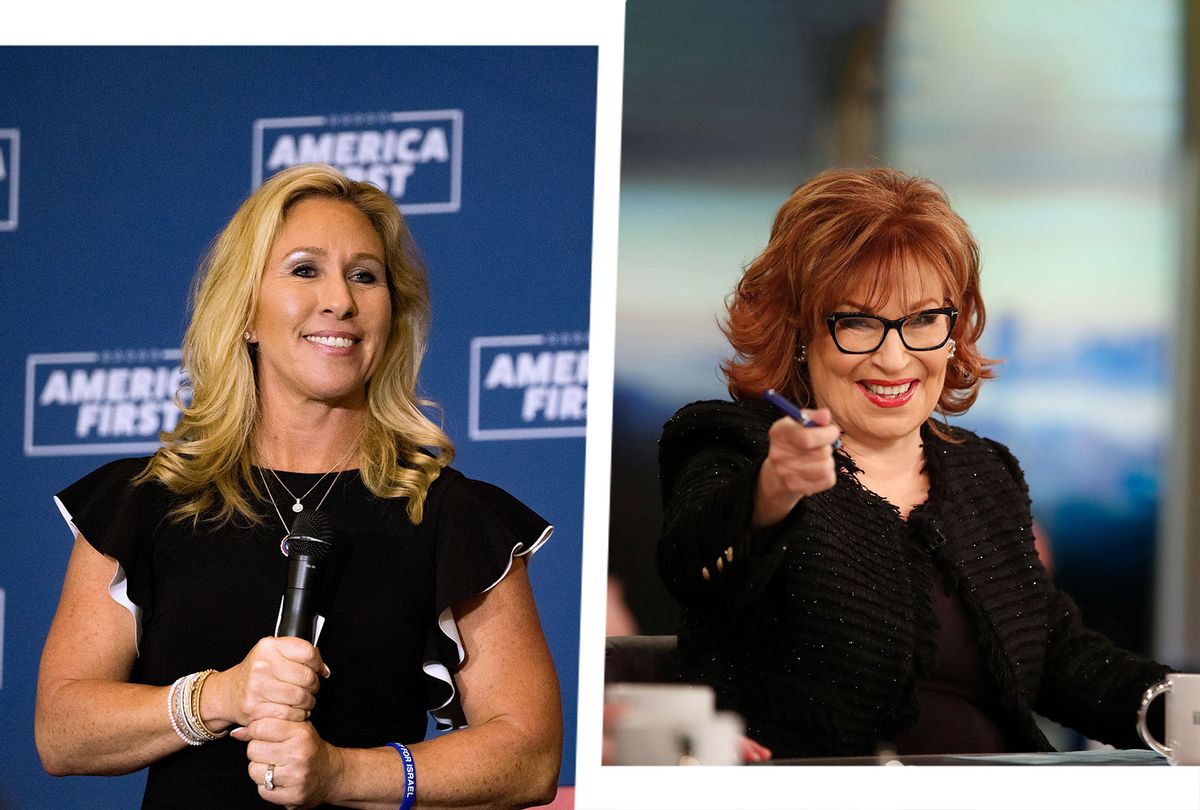 Will Smith's Oscar slap continues to ricochet in not-so comedic ways, and the hosts on "The View" are right there to offer their commentary.

In their latest klatch, they address how Rep. Marjorie Taylor Greene R-Ga., had taken offense at a joke made by comedian Jimmy Kimmel on his late-night show earlier this week. In reference to Greene calling three senators "pro-pedophile" for their support of Associate Justice of the Supreme Court Ketanji Brown, Kimmel said: "Where's Will Smith when you need him?"

Of course, he's referring to how the "King Richard" Oscar winner slapped Chris Rock onstage after Rock insulted Smith's wife in a monologue.

Greene responded on Twitter by calling Kimmel's line a "threat of violence" and writing that she had reported him to the Capitol Police.

On "The View," host Joy Behar, a comedian herself, has gone on record about how she feels comedians should feel more protected to make jokes and not expect an overreaction – such as Smith slapping Rock, or in this case, Greene notifying the authorities.

As if to prove her point, Behar repeats Kimmel's Will Smith line, remarking after the audience giggles: "See? They laughed. Not so funny to her, OK? . . . [Greene] is a joke ,and yet she can't take a joke," later calling her, "touchy, touchy, touchy."

Behar and Greene have their own history, which the host reminds the audience in order to demonstrate how to not take comments so seriously.

Related: Jimmy Kimmel claps back after Marjorie Taylor Greene threatens to report him to the police

Earlier this year, Behar said, despite (or because of) loosening mask mandates and inconsistent messaging from the CDC, she plans to continue wearing a mask "indefinitely" in certain situations to prevent the spread of COVID as well as other illnesses: "Why do I need the flu or a cold even? And so I'm listening to myself right now. I don't think it's 100% safe yet."

This decision enflamed Greene, who wrote on Twitter, "When it comes to Joy Behar, Americans would just prefer she wear duct tape indefinitely."

On "The View," Behar first points out the hypocrisy of how Greene supposedly feels threatened by Kimmel's joke of violence while she basically threatened Behar herself. "I could get upset by something like that, couldn't I?" Behar says. The implication of course, is that she did not call Greene's comment violence and overreact by calling the cops. She took it as the (very bad) joke it was.

Meanwhile, "The View" moves on to discuss whether or not politicians like MTG can be funny (no was the consensus) and the notion that comedians like Kimmel and perhaps Rock "don't care if you're offended" by their jokes. Especially not if you're a politician like Greene.

Guest co-host Ana Navarro also reminds viewers that Greene didn't feel the need for the Capitol police on Jan. 6, instead defending the deadly violence of the insurrectionists. But for Kimmel telling a televised joke? Sure.

"I'm really glad Marjorie Taylor Greene remembers that the Capitol Police is there," Navarro says. "She should be very grateful that there's a Capitol Police there that is there to protect members of Congress – not from jokes, but from insurrectionists."

Navarro also mentions Greene's harassment of gun violence survivor David Hogg and others. "Really, sweetheart, you can dish it out but you can't take it?" she says before suggesting Greene is a "snowflake," the derogatory term primarily used by the right to demean liberals.