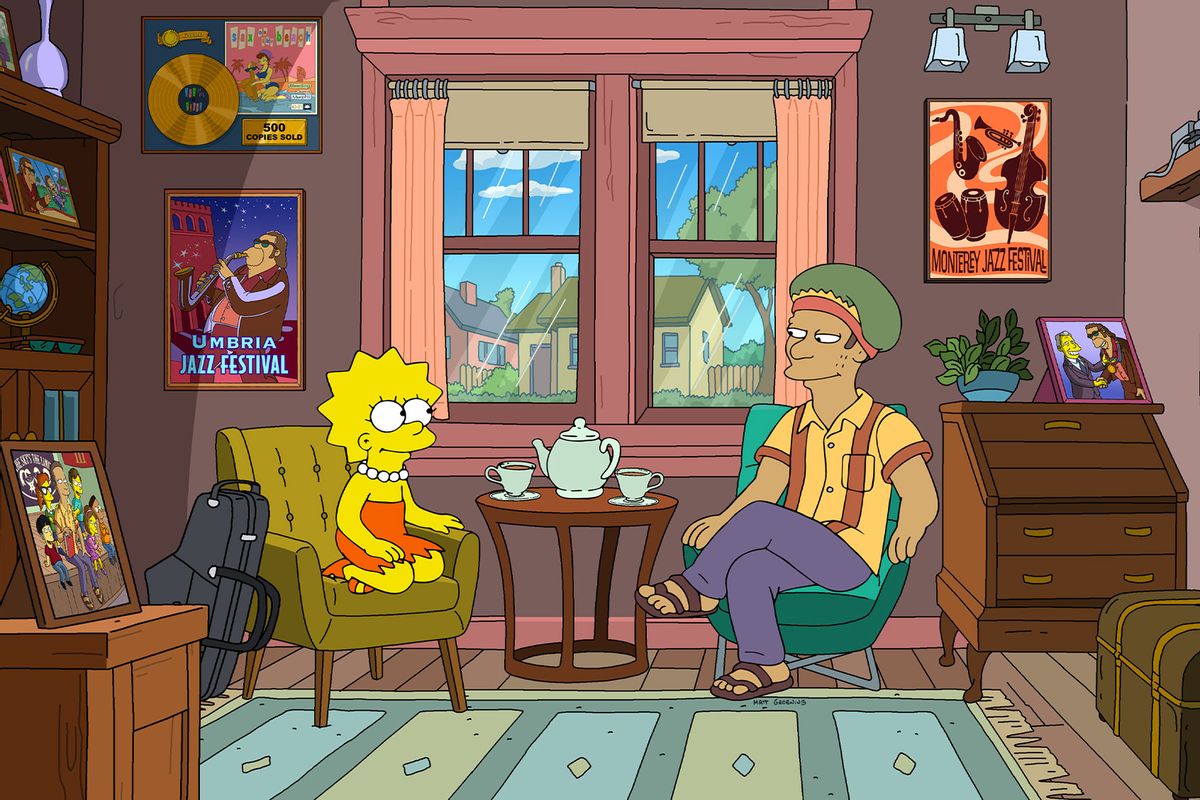 Last week, Variety announced that the long-running series "The Simpsons" had made history recently with Sunday's episode titled "The Sound of Bleeding Gums," which features a deaf voice actor.

Is it historic? The first animated program in general to feature a deaf actor may have been the children's series, "Madagascar: A Little Wild" which highlights the "sign-over" talents of deaf actor Shaylee Mansfield long before the FOX show. "Madagascar: A Little Wild" also modeled an animated character on Mansfield. This is the first time "The Simpsons" has included a deaf actor (John Autry II) whose character on the show speaks orally and signs briefly, a language which presented a particular challenge according to the show creators.

American Sign Language (ASL), which the character of Monk utilizes along with orally speaking, uses fingers, hands, body motions and facial expressions. Actor Troy Kotsur, who this year became the first deaf performer to win an Academy Award for Best Supporting Actor, spoke in his moving acceptance speech about the challenges his signing father had in communicating after experiencing a car accident which left him paralyzed and unable to sign.

"The Simpsons" characters have always been animated with only four fingers on each hand. The show gets around this so-called issue in communicating by only including a few lines of ASL.

From "The Simpsons" to "CODA," why are deaf characters seemingly having a moment right now? Is this the jump forward some audiences believe, or are we standing still—still!—when it comes to accurate and interesting stories of disability?

Related: Is "CODA" the "Green Book" of films about deaf people?

In "The Simpsons" episode, jazz enthusiast and saxophone player Lisa realizes the late Bleeding Gums Murphy, her favorite jazz musician, is having his music used for lottery commercials, without the permission of his estate and without compensation. In the course of her research into the issue, she discovers the musician has a son, Monk (Autry II). Monk is now grown and has been profoundly deaf since birth.

Fired up in only the way that idealist Lisa can be, she decides her mission is to restore the musical rights to Monk, giving him enough money to afford a cochlear implant, a device that will allow him to hear some.

These deaf roles are played by deaf actors, a casting that seems obvious but would have been inconceivable only a few short years ago.

Through most of the episode, Monk only reads lips, a difficult experience (I do it; it gives me a headache at the end of most days) which is fallible. But the only time the character says he struggles is when reading the lips of a music industry guy with a bushy/concealing mustache.

Along with casting Autry II, who is compelling and real, "The Simpsons" episode features the talents of deaf performers Eli Steele (the brother of the episode's writer Loni Steele Sosthand; Monk was partially based on him), Kaylee Arellano, Ian Mayorga and Hazel Lopez.

"The Simpsons" is far from the only show to veer recently into deaf stories. From "Sweet Magnolias" to "Ginny & Georgia," multiple shows from the last few years have included a deaf character.  A new Peacock series "Killing It," starring Craig Robinson, features actor Stephanie Nogueras, who is deaf and signs in the show.

It shouldn't be revolutionary, but it is, that these deaf roles are played by deaf actors, a casting that seems obvious but would have been inconceivable only a few short years ago (the original French film "CODA" was adapted from, for example, featured no deaf actors in the deaf or any roles). That's a big, necessary step, but Hollywood continues to take steps backward in many other ways.

One way is the utilizing of deaf characters for only minor roles, like a sprinkling of marginalization, one for which Hollywood pats itself on the back as a job well done: or, done well enough. "Springfield is continuing to diversify its population of animated characters," Yahoo! News wrote about "The Simpsons" episode (but there's no sign that Monk is going to be recurring). A repeated criticism rightfully lobbed at the HBO series "And Just Like That" is that by simply introducing a cornucopia of marginalized characters with little to no development, the show "throws characters and issues at the wall like spaghetti, hoping something is done and will stick."

Stories will never make strides until they're actually created by the people whose community is being mined for content.

Deaf characters function the same way in many shows at the moment, like "Sweet Magnolias" where a deaf character appears in one scene only — and exists solely as a showcase for a main (non-disabled) character's goodness. Look how sensitive he is! He has a deaf friend! He can even communicate (badly) with her!

One of the main criticisms of "CODA" is just that — the movie isn't about deaf people at all. They're not the heroes. It's the story of a hearing girl, seen through an abled lens where the deaf characters operate like props, taking a backseat to what was billed as their own story.

It's not, perhaps in part because it was not directed or written by a deaf or Hard of Hearing creator, as "The Simpsons" episode was not. Though deaf-adjacent is a good start, stories will never make strides until they're actually created by the people whose community is being mined for content.

Hollywood loves to reward itself for the bare minimum, and deafness may be the first disability to be rising in onscreen representation in part because deafness is often invisible. "You can't tell," is something non-disabled people say all the time when they find out about my deafness, thinking they're congratulating me.

The Disney+ show "Hawkeye" seems radical, in part because one of the Hard of Hearing characters (Jeremy Renner's Clint) physically deals with his hearing aid. The viewer sees it, both in his ear and in his hands when he takes it out.

We care about deaf stories when they have tidy endings.

"The Simpsons" also animates hearing aids and a cochlear implant. But not all deaf people wear them (or want to, even if they can afford to) and most often onscreen deafness is represented without.

Deafness is a safe disability to show onscreen. It's palatable for abled people to tolerate and easier than say, a character in a wheelchair (perhaps why the disabled main character on "Station Eleven," a wheelchair user in the book, was minimalized in the HBO series, his wheelchair changed to a cane).

But easy stories aren't always the best, and stories created for the comfort of a non-disabled audience usually have the self-satisfied ring of inspiration, like "CODA" does. That's not what being disabled is and that's also not an interesting, true or new story to tell.

We care about deaf stories when they have tidy endings, as "The Simpsons" episode unfortunately does, endings that make abled people feel better. Despite the strengths of Monk's character, the episode's ending feels tacked-on and panders to a non-disabled audience, where a disabled character is "fixed." A much more radical storyline would be to end "The Simpsons" a few scenes earlier. "I was happy until a little girl came and told me I wasn't," Monk, who heads a nonprofit and has a community and a life he says he loves, tells Lisa. "Please stop helping me."

"I'm not anyone's cause," Monk says. "I enjoy who I am." That's one of the lessons Hollywood still needs to learn.